Out West was the 8th of the 15 comedies Buster Keaton made under the tutelage of one of the silent screen’s most popular comedians, Roscoe “Fatty” Arbuckle. The version that survives is somewhat disjointed and surreal, and requires more than one viewing to parse the plot. This was only the second film Arbuckle and Keaton made after moving to California, and the dramatic San Gabriel Canyon locations are well used. The characters are all gargoyles, with Al St. John’s bandit Wild Bill Hiccup particularly alarming. As Jim Kline writes in The Complete Films of Buster Keaton, “Keaton and Arbuckle indulge in a brand of humor they both loved, gags built around killing and death. Extremely nightmarish, like a filmed dream, Out West is totally illogical, chaotic and amoral.”

There is so much written about Keaton, and I have no wish to be redundant. However, I bought the April, 1918 issue of Photoplay, and was surprised to discover the following article. None of the scenes in these photos (credited to Stagg) appear in the film. Note that Chaplin’s egomania was remarked on in print, even at such an early date! The piece has no byline. The overlapping layout design made scanning difficult, so please forgive my own webpage layout.

Fatty thought this would be much funnier if they reversed the order and had him at the top. His motion was beaten two to one.

Herewith is presented a bunch of “gags” that you probably won’t see on the screen. They are merely being tried out to see if they are funny–if they can “get a laugh.”

Why, a “gag” is a bit of “business”–a situation, that will shake a laugh out of the casual looker, because of its icongruity, its abrupt contrast, or its physical humor. It may be a subtle piece of work, or a sudden bit of rough stuff.

Now comedy making is largely inspirationaal. Most of the “gags” are evolved on the sceen, so that the “writing” of the vehicle is largely a matter of physical experimentation.

Many times the screen comedian keeps his entire company on the set for hours, just to provide him with the atmosphere necessary to work out his “gags.”

“The gag’s the thing” is the gospel of the makers of slapstick comedy. And very often when the “gags” are coming good, the plot–if there happens to be one–is tossed into the scrapheap to make room for the “gags.”

Roscoe Arbuckle, like Charlie Chaplin, likes to dope out his funny stunts right in front of the camera, even if it is not in operation, but “Fatty” is more generous with his footage so far as his colleagues are concerned–he lets them “get” the laugh if it improves the completed product. 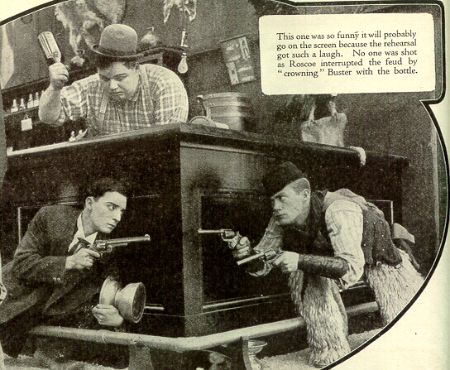 This one was so funny it will probably go on the screen because the rehearsal got such a laugh. No one was shot as Roscoe interrupted the feud by “crowning” Buster with the bottle. This is the most commonly reproduced still from Out West. 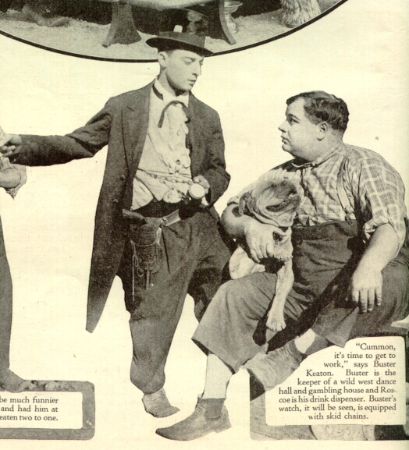 “Cummon, it’s time to get to work,” says Buster Keaton. Buster is the keeper of a wild west dance hall and gambling house and Roscoe is his drink dispenser. Buster’s watch, it will be seen, is equipped with skid chains. 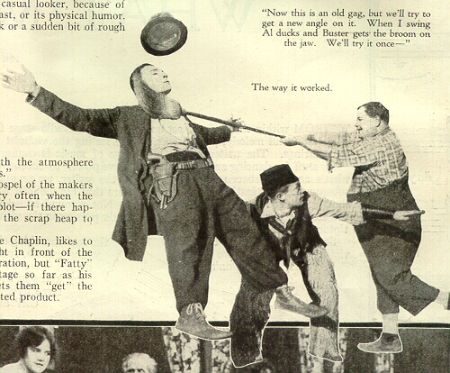 “Now, this is an old gag, but we’ll try to get a new angle on it. When I swing Al ducks and Buster gets the broom on the jaw. We’ll try it once–” The way it worked. 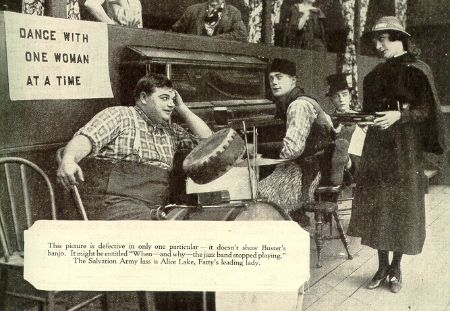 This picture is defective in only one particular–it doesn’t show Buster’s banjo. It might be entitled “When–and why–the jazz band stopped playing.” The Salvation Army lass is Alice Lake, Fatty’s leading lady.