Out of the Past (1947) Directed by Jacques Tourneur.  Robert Mitchum, Jane Greer, Kirk Douglas (96 min).

A former private eye running a podunk gas station is sucked into working for a ruthless gambler. The weary detective in a rumpled trench coat, in thrall to a no good dame, narrating his troubled past: this is quintessential film noir. “Cinematic perfection, a Hollywood classic that’s as great and as enjoyable as its reputation has promised” (San Francisco Chronicle).

As we wind up the first leg of our Car Crazy series, it’s fitting that we end with a film in which cars and driving play a central role in a classic film noir plot.  The film begins with a car (the camera thrillingly ensconced in the back seat) pulling into Jeff Bailey’s service station.  So much territory is covered in this film, Bridgeport, CA, 356 miles from Hollywood, to Lake Tahoe, Acapulco, San Francisco, and through the high mountains of California.  In Europe, Bailey just would have taken the train.  In California, an automobile is the only option.

Build My Gallows High was a moderately successful crime novel written by Daniel Mainwaring under the pseudonym, Geoffrey Holmes.  Mainwaring was a publicist for Warner Brothers, and later a screenwriter for B movies. He made far more money doing even the cheapest movie than he ever made from his novel writing.  RKO bought the rights to the book, and the services of the author, to craft the screenplay.  After finishing his draft, James M. Cain, of Double Indemnity fame, took a crack at it, streamlining the flashbacks, and changing Kathy Moffitt’s motivations.  Another RKO writer, Frank Fenton, was brought in to polish the dialogue.  Director Tourneur, too, had his hand in the script.  He didn’t like it at first, and wouldn’t direct until the changes he wanted were made. Early screening audiences reacted negatively to the title, and it was renamed Out of the Past, although it was called Build My Gallows High in the UK. 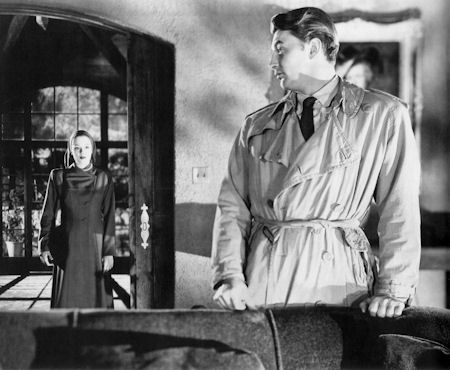 Humphrey Bogart was interested, but the timing wasn’t right.  Dick Powell, the former crooner who had also recently played Philip Marlowe was mentioned.  But, the producers wanted some fresh, young faces, casting Robert Mitchum in his first important lead, and then adding 22 year old Jane Greer, and Kirk Douglas, in only his second film.

Robert Mitchum’s background did not resemble that of many other actors.  Born in Bridgeport CN,  his father was killed in a railway yard accident when Mitchum was a toddler.  His childhood was unsettled and he argued with his stepfather. Repeatedly expelled from school, he took a job on a freighter at 14 but when his true age was discovered, he was fired.  Hitchhiking and hopping freights to California, “I worked in one-arm restaurants washing dishes and hauling slop, and, when I got to California, I lay on the beach and rolled drunks.  I didn’t know any better” (FIR).  Riding the rails back east to his home got him arrested at 16 for vagrancy, he spent a week in a Georgia chain gang.  His older sister got him into the Long Beach Theater Guild and he began working as a stage hand and actor.  He wrote comedy material and songs for his sister, and soon for other performers as well.  Mitchum also ghost wrote astrologist Carroll Righter’s astrology column and managed his tour.  Married, and with a baby on the way, he started working at Lockheed Aircraft, but soon left the job.  He began playing bit parts in the movies, starting with Hopalong Cassidy, he had small parts in 18 films in 1943 alone.  He was nominated for a supporting actor Oscar in 1945 for The Story of G.I. Joe, based on war correspondent Ernie Pyle’s memoirs, and shortly afterwards was drafted.  After he got out of the service, he was cast as a rugged leading man in films like the one we’ll see tonight.  The year after Out of the Past, he was arrested for marijuana possession, spending nearly two months in jail.  Rather than sabotaging his career, it cemented his reputation as a bad boy leading man which served him in good stead in his lengthy career.  His last role was in Jim Jarmusch’s Dead Man, starring Johnny Depp in 1996. 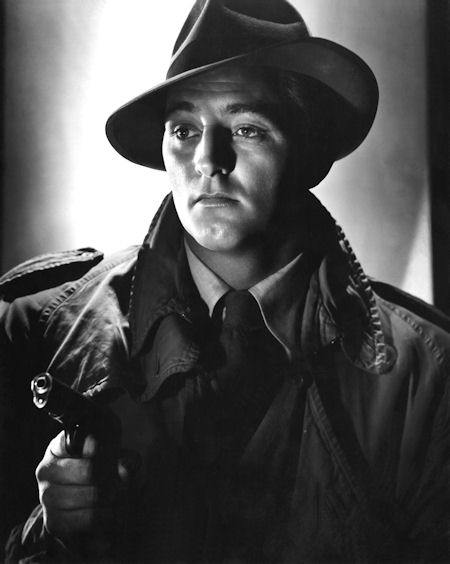 Jane Greer, born Bettejane had also packed a lot of living into her short life.  A model and singer, she married aging crooner Rudy Vallee when she was 18, and when the marriage hit the rocks, had an affair with Howard Hughes, who had long had his eye on her.  In 1945, she married a more stable partner, and signed a contract to be an RKO starlet.  She didn’t test for the role in this film, they just assigned her to it.  “It was a great, great part.  Anybody would die for a part like that.  The way they build her up before you even see her…’She shot me, she took my money, but don’t hurt her, I just want her back.’ And then, the net guy sees her falls instantly in love with her.  This is some kind of woman.  How can you go wrong? It was a part made in heaven” (Server 121). Tourneur said, “’Zzjjane, do you know what ahm-pahs-eeve mean?’ ‘Impassive? Yes.’’No big eyes.  No expressive.  In the beginning you act like a nice girl.  But then, after you kill the man you meet in the little house, you become a bad girl.  Yes? First half, good girl. Second half, bad girl.’”  (Server 125).  Her costumes would go from light to dark as well, ending in black.She silkily plays a woman exploiting her only currency, sexual attraction. She had a cameo in the inferior remake starring Jeff Bridges and Rachel Ward, Against All Odds. 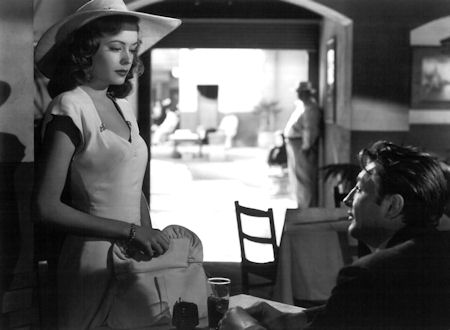 The film is one of the masterworks of Jacques Tourneur, director of Cat People and I Walked With a Zombie, and Nicholas Musuraca, a cinematographer responsible for the intensely mysterious atmosphere of Cat People.  This film would not only showcase his touch with dark interior lighting (which set the stage for much of the film noir to follow) but exterior shots as well, since Out of the Past spends a lot of its time in the brightly lit outdoors. Still, it is considered by some the most quintessential of films noir, with its voice over narration, flashbacks, the shadowy world of crime and passion contrasted with a more “normal” world, a femme fatale, and a hero entrapped by fate.

The film crew stayed in Bridgeport CA for three weeks of mountain locations, becoming bored to death with the lack of distractions in a small town. Back in LA, Jane Greer arrived for her scenes. Greer knew Mitchum casually from the studio but the first scene she shot with him was the love scene on the beach at Acapulco, so you can admire their acting as they have just met!  He was casual and funny on the set, and she enjoyed working with him.  Tourneur also admired Mitchum’s laid back style. “There are a large number of players who don’t know how to listen.  While one of their partners speaks to them, they simply think, ‘I don’t have anything to do during this; let’s try not to let the scene get stolen from me.  Mitchum can be silent and listen to a five minute speech.  You’ll never lose sight of him, and you’ll understand that he takes in what is said to him, even if he doesn’t do anything.  That’s how one judges good actors” (Server 126). 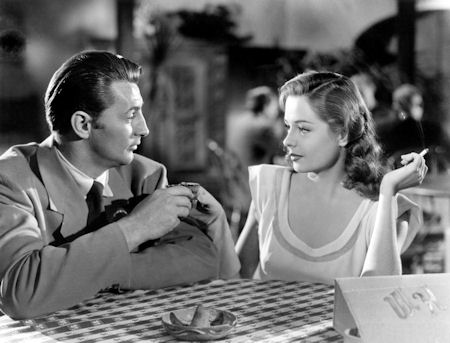 The third side of the triangle is played by Kird Douglas, in only his second film.  He had a poverty stricken upbringing in a small town outside of Albany, New York.  His parents were illiterate Russian Jewish immigrants, and his father struggled to support the family, which consisted of six sisters, and one son, born, Issur Danielovich.  Jews were banned from working in the mills that were the town’s main livelihood.  From a very young age Douglas took a variety of odd jobs which included delivering papers and selling pop and candy to the mill workers.  The money he made as a boy was often the family’s only income.  An inspirational high school teacher urged him to better himself and pursue his dream of becoming an actor. Determined to go to college, he hitchhiked to St. Lawrence University.  He had never applied and had no money for tuition. Showing the dean his high school records he was admitted and given a part scholarship and a job.  He eventually became president of the student body and the drama club, and was an undefeated intercollegiate wrestling champion.

After college, he moved to New York City and charmed his way into the American Academy of Dramatic Arts, the premiere drama school of the day, where he was given an unprecedented scholarship.  He worked as a waiter and in summer stock and changed his name to Kirk Douglas, the Douglas after Douglas Fairbanks, Sr. and the Kirk because it was “snazzy” (Thomas 16).  He talked his way into some small parts on Broadway, but then was drafted into WW II.  Afterwards, he resumed his stage career, hoping to be a big Broadway star.  A classmate of his at AADA, Lauren Bacall, recommended him to movie producer Hal B. Wallis, and, between stage engagements, he was screen tested and hired for The Strange Love of Martha Ivers opposite Barbara Stanwyck.   He made a big hit in his first film, clearly, the camera loved him, and he changed his career plan from stage to screen.

He said once, “I’ve made a career, in a sense, of playing sons of bitches, but I’ve always tried to show how a man got that way.  The guy might not be any good, but you must understand him.  Often, in my films, he’s a rebel against society, and most of us would like to say ‘to hell with society.’” (Thomas 19).

Kirk Douglas, liked Mitchum personally, but would not cede territory to him on screen. He decided to fight him by trying to over-underact him (which is what makes this such an unusual Douglas performance). Greer said, “It was a hoot to watch them go at it.  They were two such different types.  Kirk was something of a method actor.  And Bob was Bob.  You weren’t going to catch him acting. But, they both tried to get the advantage (Server 127).

Reviews of the film were mostly positive, and it made money. But, it was considered just another private eye movie until later critics began to appreciate its chiaroscuro atmosphere, great dialogue, and the breakout performance of a young actor in the most rumpled trench coat in movie history. 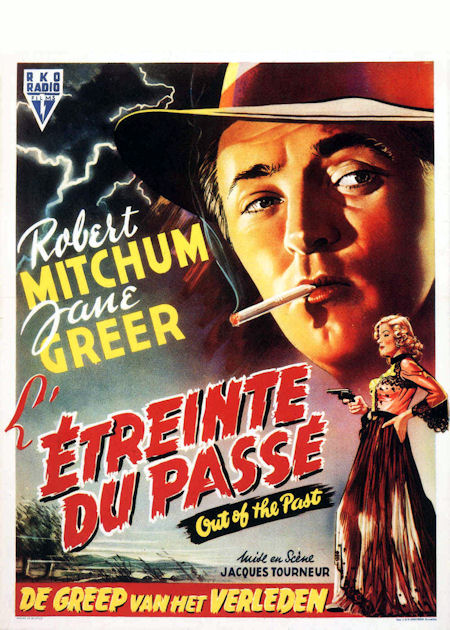