Parvarish (Upbringing) gives a quirky twist to the perennial masala plot of the rivalry between good and bad brothers. A police officer (an alarmingly portly Shammi Kapoor) promises a dacoit’s dying wife that her newborn son will not be raised by his father. He takes the baby home to his wife, nursing a baby boy of her own, and the two grow up as brothers. They don’t know who is the foundling. Amitabh Bachchan, the dacoit’s son, grows up to follow in his adoptive father’s footsteps as an upholder of the law. Vinod Khanna, the policeman’s real son, is a bad boy, who joins villain Amjad Khan’s gang, now ensconced in a swanky lair. Who wouldn’t be attracted to the man who lives in a cave glistening with fake stalactites, as go-go dancers gyrate behind a red glass partition to music only they can hear?

Shabana Azmi and Neetu Singh are two very liberated sisters wearing a series of hideous 1970s trouser suits. They are impish pickpockets who fall in love with the two brothers. Director Manmohan Desai had a fondness for assertive women, giving his films a modern edge. He whimsically gives them little Chaplinesque jumps and twitches as they scurry away from their crimes. Shabana Azmi, who has worked in both popular and art cinema, reflected on her experience in an interview with Nasreen Munni Kabir (quoted in Haham) “Your imagination is tested in the extreme. For instance, in Manmohan Desai’s film Parvarish, for which we had to shoot the climax for thirty days. And Neetu Singh and I had to hang in the villains’s den over a river where at any moment a crocodile could eat off your legs” (NB: it is quicksand, not crocodiles). “So can you imagine trying to pretend this whole thing is real, and do it with any degree of conviction? That’s quite, quite wonderful. I think that what commercial cinema does is to require you to create an alternative reality. And to bring any semblance of truth to that alternative reality is a real challenge for an actor. You have to suspend your belief system entirely, and go along with it.”

The songs, by Manmohan Desai favorites Laxmikant and Pyarelal, are enjoyable. Standouts are the song in which the girls feign suicide for the benefit of their swains in “Aakri Salaam Lethe Ja Na,” and Amitabh and Vinod’s challenge to one another “Hum Premee Prem,” with Shammi joining in for a chorus, too. Shabana and Neetu’s revolver wielding qwaali is also delightful.

Amitabh and Desai had a close relationship, and they inspired each other. “My heroes are like me,” Desai said. All the impossible feats I’ve dreamed of, they perform for me on the screen. I’d even say Amit is my alter ego.” The inspiration was a two way street. Amitabh’s fondly remembered mirror scene from Amar Akbar Anthony occurred when the actor was improvising during his director’s absence from the set–while directing a scene from Parvarish, which was filmed concurrently. But, Amitabh’s comic charm is in full force in this film, too. He’s adorable in his signature white bell bottoms, even if he has to briefly don a hideous checkboard suit (and ghastly red wig) as a disguise. His conspiratorial wink at the audience from his hospital bed is devastating.

Parvarish has Manmohan Desai’s characteristic chaos, of course. As Amitabh Bachchan says “He doesn’t like wasting time…He wants a lot of pace in whatever he does.” The film, made during the Emergency, shows the difficult conditions under which it was filmed. Vinod drives a sporty white Mustang convertible, although on closer inspection, it has a bit of rust and a dent or two. A set from the climax of Amar Akbar, Anthony is redressed, as it has been in many other films, if memory serves. Desai was constrained by the censorship rule that there could not be more than 150 feet of film for each action shot, which restricted results in the editing room. This doesn’t seem to have affected the lengthy “underwater” battle, clearly inspired by the James Bond movie, Thunderball. The submarine is obviously a model, and the struggle beneath the sea is clearly shot on dry land with a blue filter over the lens. Uproarious fun, though. As is all of Paravish. 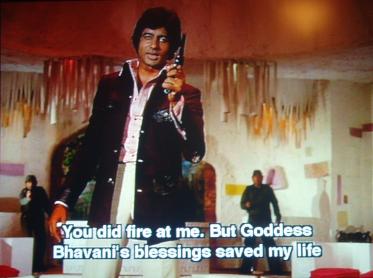 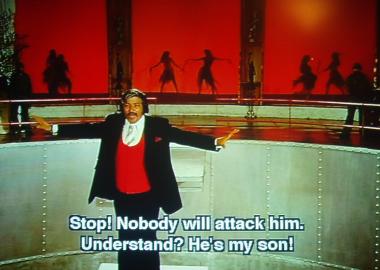