Little Apu grows up in rural Bengal, his life ruled by charismatic women, in a poetic film inspired by Italian neorealism. “All the explosions of a blockbuster, but they detonate in the heart. If you’ve never seen an Indian film, clear out your schedule pronto. Wonderstruck and attuned to the smallest details…Ray’s trilogy is quiet and concentrated. These films will lift you up” (Joshua Rothkopf Time Out New York).

In the golden age of art house cinema, audiences attended subtitled films with enthusiasm. European and Japanese films, in particular, captured the imaginations of American audiences. The films of Satyajit Ray are a major Indian contribution to this vanished era.

In 1993 a devastating nitrate fire destroyed a film archive in London, where the original negatives of Satyajit Ray’s Apu Trilogy had been deposited for safekeeping. Considered damaged beyond repair, the Academy of Motion Picture Arts and Sciences retained every scrap of burned negative. The Criterion Collection, in association with L’Immagine Ritrovata in Bologna, Italy, rehydrated, repaired and digitally scanned the negatives. After a thousand hours of hands on restoration, the scan was painstakingly digitally restored at Criterion. For the next three weeks at the North Carolina Museum of Art, we’ll present one of the milestones of world cinema. 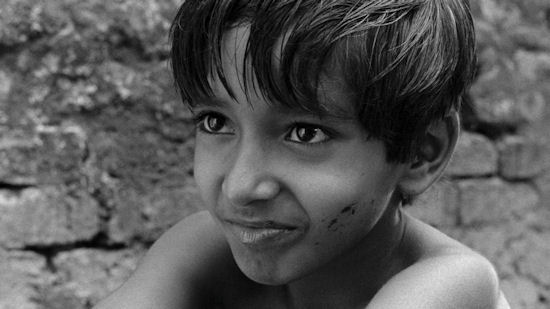 Satyajit Ray was born May 2, 1921, into an artistic, middle class Bengali family in Calcutta, India. An only child, he became enamored of Hollywood movies. He loved Chaplin, Keaton and Lloyd, Douglas Fairbanks in The Thief of Bagdad and Lillian Gish in Way Down East. Later, the films of Ernst Lubitsch became favorites, particularly Trouble in Paradise. The older he got, the more films he saw. He wrote a fan letter to Deanna Durbin (she replied) but only thought of watching films, never making them. He also had a love for Western classical music. His exposure to European and American culture in his youth is similar to the Japanese director Akira Kurosawa, another artist whose films spoke directly to Western audiences.

Ray thought he might be a painter, but instead took a position as a commercial artist before completing his degree. He worked for a British-owned advertising agency, eventually becoming art director. The company branched out into publishing, and Ray designed and illustrated books, including Bibhutibhusan Banerji’s novel Pather Panchali. His interest in film became increasingly serious. During and after WW II, the presence of American servicemen brought increasing numbers of recent Hollywood films to India, and Ray was particularly struck by Jean Renoir’s The Southerner. “This was the film that first brought home to me that characters in a film needn’t be black or white, but could also be grey. It also taught me the importance of shooting in and around locations rather than artificial studio sets meant to represent interiors” (Apu Robinson 18).

He had never been interested in the theatricality of commercial Indian cinema. He wrote an article in 1948, “What is wrong with Indian films?” He concluded “The raw material of cinema is life itself. It is incredible that a country that has inspired so much painting and music and poetry should fail to move the filmmaker. He has only to keep his eyes open, and his ears. Let him do so” (Apu Robinson 19). The following year, Jean Renoir came to India to film The River, and Ray helped him scout locations and connected him with local actors. They responded to one another immediately, and Renoir encouraged him to film Pather Panchali, urging him to eschew Hollywood style.

Shortly afterwards, Ray sailed to London to spent time at his agency’s headquarters, where even more films were available, and he was thrilled by Vittorio de Sica’s Bicycle Thieves. He said the film “gored” him. “I came out of the theatre my mind fully made up. I would be become a filmmaker. …the prospect of giving up a safe job didn’t daunt me anymore. I would make my film exactly as De Sica had made his: working with non-professional actors, using modest resources, and shooting on actual locations” (Apu Robinson 24).

He would eventually make 3 films from two novels by Banerji, Pather Panchali and its sequel Aparajito. Pather Panchali appeared first as a serial in a Calcutta magazine. It became a great success, and although Banerji wrote 50 books, this remains his most famous. The book is based on the author’s own rise up from extreme poverty. One of his friends said of the author, “His hard life had not embittered him, nor made him a cynic. His sympathy for ordinary people was unlimited, and he was not repelled even by the squalor in which such people had to live in our society” (Ray Robinson 74).

One of Ray’s greatest challenges was how to depict village life. As a life-long city dweller , unlike author Banerji, he had little experience of the rural environment. The script had to reflect the meandering plot of the novel, “because that in itself contained a clue to the feel of authenticity: life in a poor Bengali village does ramble” (Ray Robinson 75).

Pather Panchali never had a script. Ray had a treatment started in 1950, and some storyboard sketches, and sequences of dialogue, the majority of it directly from the novel. Ray spent nearly two years trying to raise financing from producers who wondered why they should finance a film with no love story and no songs. He finally used his own money and took out loans to finance a section of the film himself, in the hope of attracting financing. Never having made a film before, even using all the camera equipment seemed to present an insurmountable problem. Many of the actors were professionals, except for some of the extras, and the boy, Apu. Ray auditioned many boys for the role, but finally found his Apu playing on the roofs next door to his Calcutta flat.

The first international film festival was held in India in 1952, and Ray saw Kurosawa’s Rashomon, indeed he saw it three times in three days. The film gave him hope that his film, too, might find western audiences. Meanwhile, shooting continued slowly, as money trickled in. He showed his employers at the ad agency some still photos from his film, and their enthusiasm encouraged him. He showed footage to some of his friends, one of whom said, “This is India’s first adult film” (Apu Robinson 58). 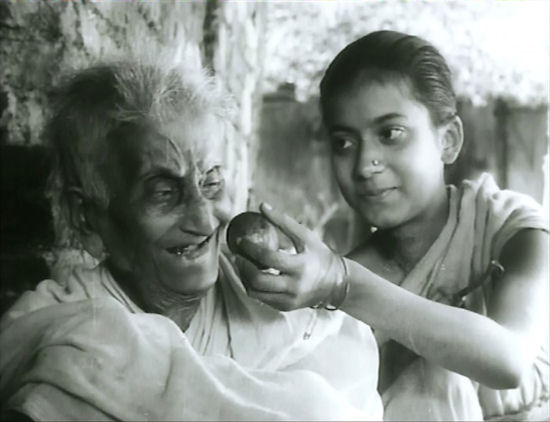 It wasn’t until 1955 that the film was completed, urged on by a deadline showing at New York’s Museum of Modern Art. Monroe Wheeler of MoMA was in Calcutta seeking Indian textiles and objects for an exhibition and heard of the film. He saw some stills (one would eventually be included in the landmark book The Family of Man) and asked if the film could be finished in time for the exhibition.

The music of Pather Panchali, by Ravi Shankar, is one of the most remembered aspects of the film. The two were already friends when Ray asked him to compose the score. Shankar said, “Ray understood Indian classical music as much as he knew Western classical music…Here was a director who would never compromise nor allow me to go overboard. He was confident and rigid about exactly what he required from me or any of his composers. Ray himself was an outstanding composer, and music sessions with him are still unforgettable. For the Apu Trilogy, he extracted the true essence of rural Bengal from me musically” (Apu Robinson 84). Because of the looming MoMA screening deadline, Shankar, in the middle of a tour, watched a rough cut of half the film and composed and recorded in a single 11 hour session.

American reviewers were sometimes baffled by what they saw. Said Henry Hart, the old curmudgeon of Films in Review, “Were it to be re-edited for Western audiences, and equipped with a truly poetic narration, like the ones James Agee used to write, Pather Panchali could be 1) a perfect film for art houses and film societies; 2) an almost perfect ethnographic film; 3) an enjoyable and moving motion picture for any audience above average in intelligence” (FIR 86). Oddly, he was convinced what he didn’t understand was because “I suspect the original was four or five hours long and cluttered with all kinds of vaudeville acts, as most Indian films are.” Yet, he was moved by the acting in all three films, and praised them in his annoyingly backhanded manner.

Ray, himself, acknowledged the shortcomings of his first film. “Judged on the level of craftsmanship, there was much that was wrong with my film. It couldn’t be otherwise. We shot it in sequence, learning as we went along. The early part clearly shows we were groping with the medium. Shots are held for too long, cuts come at wrong points, the pace falters, the camera is not always placed in the right position. The second half is much more assured and—this is what was probably behind the film’s wide success—works well on an emotional level, even with a Western audience” (Ray 78).

The audience response was positive, and then Ray was encouraged to premiere the film in his native Calcutta. Because of the contracts drawn up for finishing the film with the Government of West Bengal, Ray’s payment for foreign rights was overlooked, and he received no income whatsoever from the film. “They get the money, but I got the fame” he said (Ray Robinson 84).

The story of Apu’s journey from childhood to adult responsibility is a metaphor for post-Independence India seeking modernity.  Education, the migration from village to city, and the transformation brought by the railroad is reflected in the life of a rural boy stepping onto the national, and after Ray’s film became a world-wide success, the international stage. 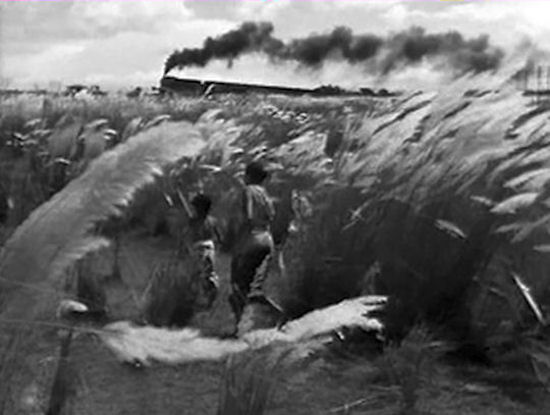 Two decades after first seeing Pather Panchali, Akira Kurosawa said, “I can never forget the excitement in my mind after seeing it. I have had several more opportunities to see the film since then and each time I feel more overwhelmed. It is the kind of cinema that flows with the serenity and nobility of a big river” (Apu Robinson 91)