The shadowy environs of the Casbah shelter a chic gangster, until a glamorous demi-mondaine awakens a fatal nostalgia for Paris. A great classic of French poetic realism, suffused with the exotic allure of colonial Algeria, Pepe Le Moko is a link between the German Expressionist classics of the 1920s and the Hollywood detective film noirs of the 1940s. “Pepe le Moko is the perfect blend of crime and romance, of sleaze and poetryabsolutely dated and perfectly ageless. In short, a classic.” (Ginette Vincendeau) Shown with Pepe Le Pew’s Oscar winning For Scent-imental Reasons.

In the 1930s, Jean Gabin was France’s most magnetic movie star, fusing a potent blend of working class glamour and doomed romanticism. The encroaching shadows of World War II caused an outbreak of fatalism in French cinema, as all European artists began to dream of escape. Pepe le Moko has eluded the police and vanished into the labyrinth of the Casbah, but finds this freedom another kind of a trap. His pursuer, Slimane, is in no hurry to apprehend him, enjoying the slow rhythm of pursuit, much as a lover may enjoy the anticipation of a leisurely courtship. “Like some of the greatest Hollywood movies, Pepe Le Moko both claims and transcends its pulp fiction material and turns it into a powerful emotional statement on identity, desire and loss” (Vincendeau).

Pepe Le Moko originated as a crime novel written by Detective Ashelbe, a pseudonym for Henri La Barthe; his initials, H. L. B., pronounced Ashelbe in French. The film is an amalgam of the novel (likely inspired by the last of the colonial expositions in Paris which glorified the remnants of the empire in Africa and Asia) and the modish American gangster-hero in films like Scarface, The Public Enemy and Little Caesar. However, American criminals are always in furious motion, the opposite of Pepe.”To be a French criminal is existential rather than functional.” (Vincendeau).

Director Jules Duvivier was born in the northern city of Lille in 1896, and was first an actor, then an assistant director. His ascension was rapid due to the manpower diverted to the machinery of WWI. His silent films were mostly unremarkable, but his sound films of the 1930s became touchstones of classic French cinema. He directed several films in Hollywood, both before and during WWII, but found, as did many of his expatriot colleagues, that the studio system was stifling compared to the directorial freedom they enjoyed in France. The poetic realism style of which he was a master could be described succinctly as, “the representation of the popular hero, the pessimistic atmosphere, the (doomed) quest for happiness, and finally the tragic destiny. The chiaroscuro lighting, background artifices, evocative visual imagery, and wittiness of dialogue resulted in a distinctive lyrical style.” (Lanzoni).

Many assumed the Pepe Le Moko was shot on location in Algiers, but is filmed on a beautifully designed studio set, which the director thought would be less distracting than an actual locale. The Casbah at Joinville Studios was admired by novelist Italo Calvino who said, “Having seen the Casbah of Pepe le Moko, I began to look at the staircases of our own old city with a different eyethe French cinema was heavy with odors, whereas the American cinema smelled of Palmolive.” Duvivier had, in fact, made films on location in North Africa, and preferred a closed environment for accentuating a noir romanticism blending stylized sets and photography. 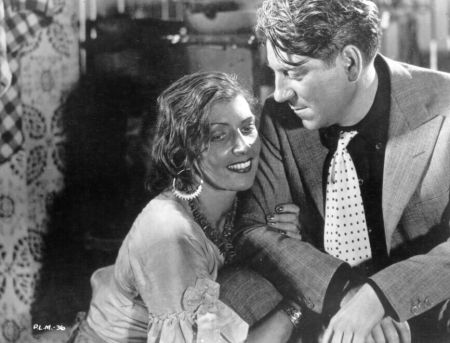 The street slang supplied by dialogue writer Henri Jeanson, a writer for a satirical weekly, cannot really be translated (though these new subtitles try) since the puns and working class argot have no equivalent in English. One of the most flavorful additions to novel was the scene in which Pepe and Gaby remember their favorite places in Paris, ending with la Place Blanche. Although some have interpreted this in a racist fashion; the white (not Arab) place, it is in fact where all Paris mingles at the famous nightclub Moulin Rouge.

There is a lot of music in this film. Gabin, who had started his career on the music hall stage, sings an infectious rumba that became a popular song. The character Tania, played by the famous French singer Frehel, sings a song that evokes nostalgia both for Paris and the youthful self of the singer, seen in a portrait on the wall. The two songs were composed by the prolific Vincent Scotto, and contrast with the Arab music of composer Mohamed Yguerbochen.

The supporting actors were familiar types in French films. Like the Warner Brothers stock company, even if their parts were somewhat underwritten, the audience knew what characters they played. Their acting was, in many cases quite broad, in part to contrast Gabin’s subtle underplaying.

The gangster’s smart wardrobe is a vital part of his appeal. Tony Camonte in Howard Hawks’ Scarface showed off his beautiful new shirts invoking a scene from The Great Gatsby. Pepe’s beautiful clothes were trend-setting, and echo those of Gaby’s. American actors were required to supply their own wardrobes in Hollywood films, so it is not great surprise that when Pepe leans back in a chair, he reveals a tiny JG monogram on his black shirt. Gaby’s gowns often repeat Pepe’s attire, showing her not as his opposite (like a film noir femme fatale) but his twin. 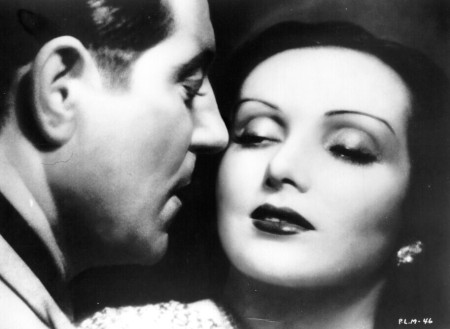 Modern day viewers are likely to be less distressed by the glamorization of crime than the implicit (and explicit) racism of Orientalist milieu. The “orient” which could be North Africa, and the Middle East as well as Asia and throughout the 19th and early 20th century provided an appealing opportunity for moral elasticity and sexual license. These themes pervaded the period, showing up in settings as diverse the Victorian taste for genre paintings of odalisques and slave auctions, Rudolph Valentino’s sensational The Sheik, the mystic rites of the Shriners or the advertising for Camel cigarettes.

Pepe le Moko was santizied and pepped-up for American audiences in the 1938 remake Algiers, a near imitation starring Charles Boyer and Hedy Lamarr. Pepe le Pew was an imitation of the more familiar Boyer Pepe, not Gabin’s. And, the closest satire was The Cat’s Bah, which parodied not just Algiers, but Casablanca, as well. Chuck Jones said Pepe was “what I wanted to be and what I think every man would like to be: irresistible, at least in one’s own eyes.” It’s not a stretch to say, that in spite of the novelty of Pepe being the only cartoon character in the classic era interested in sex, “this American view of Frenchness is distinctly unflattering. French male seduction translates as harassment and ridiculous pretense.” Ginette Vincendeau goes on to suggest this may have been an idea reinforced by returning American GI s alarmed by the odors of Europe and European preferences for garlicky foods.

“From the evocation of the Casbah streets to the hero’s state of mind, Pepe le Moko deploys a web of glamorous noir images which elevate its basic story of petty hoodlums, incompetent policemen and kept women into the realm of poetry.” (Vincendeau).

(Photos from the Museum of Modern Art Film Stills Library. Sources include: Pepe le Moko by Ginette Vincendeau, Republic of Images by Alan Williams, French Film by Georges Sadoul, the introduction to the French Film Collection of Janus Films by Roy Armes, reviews by J. Hoberman and Elliot Stein in the Village Voice, French Cinema from Its Beginnings to the Present by Remi Fournier Lanzoni)