Tracy Lord’s pre-wedding plans to a social climbing stiff descend into chaos with the arrival of a team of society snoops hosted by her former husband. Can either a sensitive slumming novelist or a suave society scion bring her to her senses? “As raucous as it is at times, it is also civilized in a way that keeps it fresh today” (Patrick McGilligan).

Katharine Hepburn fled Hollywood after being labeled “box office poison” (along with other immortal stars) by a narrow minded group of exhibitors. She’d made 14 films at RKO, always the lead, never in a supporting role, and audiences were thought to be tired of “the least versatile of star actresses” as one reviewer carped. Playwright Phillip Barry had spent time in her family home in Connecticut, where he observed her strong willed relations, as well as her discarded husband, Ogden Ludlow Smith, a Main Line aristo who hung around the place as an official younger brother. Barry wrote and rewrote The Philadelphia Story specifically for Hepburn, and she dazzled Broadway in it, with Joseph Cotton and Van Heflin, for 415 performances. Neither of the male stars made a ripple in Hollywood casting circles, and so were not even considered to recreate their stage parts, which annoyed both of them. Cotton, grinding his teeth, repeatedly explained he played “the Cary Grant part,” but shortly went onto his own movie destiny, co-starring in Orson Welles’ Citizen Kane.

Hepburn’s beau at the time was millionaire Howard Hughes, who advised her to buy the screen rights, so that when the play was a success, the movie version would not be cast without her. In fact, he lent her the money himself. Part of the pleasure of The Philadelphia Story is that Tracy Lord is so closely modeled on Hepburn’s public persona, and it’s hard to imagine anyone else in the part. Grace Kelly, who really was sort of a Tracy Lord in real life, was much less convincing in the musical version, High Society. Barry tackled the problem of counteracting a lot of Hepburn’s bad publicity for refusing to play Hollywood games. “’It’s the trouble with being a goddess, with being too magnificent. You lose the human touch.’ This was not only a consoling thought for the rest of us but an inspired solution (courtesy of Phillip Barry) to the problem of Hepburn’s career.” (Harvey). When Hollywood inevitably called, Hepburn held all the cards. Warners would not be purchasing it for Ann Sheridan, nor MGM for Joan Crawford 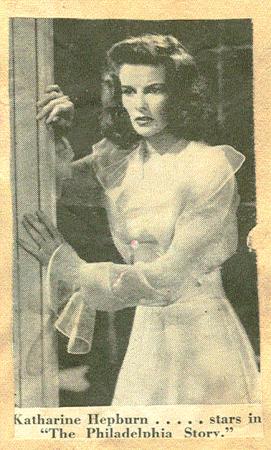 Hepburn wanted to do the film at MGM to take advantage of the studio’s glamourous image, and she wanted their two top male stars, Clark Gable and Spencer Tracy (whom she hadn’t met) to play opposite her. Producer Joseph L. Mankiewicz, soon to be an Oscar-winning writer and director himself, was asked to see the play in New York, tape record it, and rethink it. It was Mankiewicz who combined the characters of Tracy’s brother (who in the play summons the Spy reporters) and C.K. Dexter Haven, who was rather a minor presence in the play. And, it was he who devised the prologue played out with a drumroll, to summarize Tracy’s first marriage. The screenplay was credited to Donald Ogden Stewart, who would win an Oscar for it. In his autobiography, he said that the play was so perfect, it was the easiest job he ever had in Hollywood. In fact, this is extreme modesty on his part. He combined characters, reassigned dialogue and and condensed what is a rather more diffuse comedy onto the gem that we know today.

Can you imagine Mike and Miss Imbrie having the following exchange?

Liz: You’re a funny one, Mike
Mike: Why?
Liz: Use the name “Wanamaker” in a sentence.
Mike: I bite.
Liz: I met a girl this morning. I hate her, but I—
Mike: I get you, but you’re wrong. You couldn’t be wronger. Women like that bore the pants off of me.

Cukor heard the tape recording of the play, and comparing it to the film realized the laughs would come in different places, especially since it had been so changed (improved). The play depended on Barry’s witty wordplay, and the laughs in the film came more from the staging and performances. Cukor said, “That’s why I believe in letting comedy happen on the screen. When people complain about audience laughter drowning out a funny moment in a movie, I tell them, ‘Well, you can always see it again.’ It’s a very pleasing compliment.” (Lambert).

“Kate was never a ‘love me, I’m a loveable little girl’ kind of actress. Only she thinks it’s tragic to be in love with 3 men—on opening night Hepburn was infuriated that people were laughing at her.” (Cukor). Like Tracy, one might say of Hepburn, “strength is her religion.” Three people reprimand her for being an unapproachable goddess, but she “doesn’t want to be worshiped, she wants to be loved.” Cukor liked her extravagant performances, believing it was easier to tone down a performance than ratchet up a limp one. As Gavin Lambert notes, “The values are grown-up. And if the characters and situations are dated, the acting is not. The people seem spontaneous, the interactions so natural and nuanced that it seems no long acting but behavior—Cukor’s favorite kind of acting.” 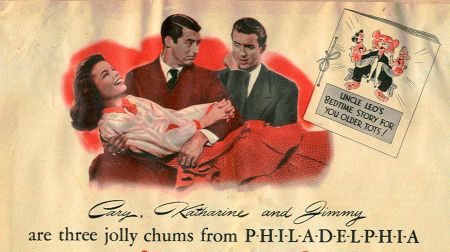 Cary Grant, a bigger star than James Stewart at the time, was allowed to choose which of the two leading male parts he wanted to play, and chose C.K. Dexter Haven, even though in many ways it was a much less showy part than Mike Connors. And, he gives a generous performance, listening closely and letting other actors have the limelight. When Connors makes his drunken appearance at Haven’s house, you can see Grant’s amusement at Stewart’s quirky acting. Grant donated his salary, $137,500, to British War Relief.

James Stewart was still at the beginning of his starring career, and felt uncomfortable both with the rather poetic dialogue in the swimming pool scene, and his wardrobe. “If I appear in a bathing suit, I know it’s the end of my career, and also the end of the motion picture industry.” When he balked at the “You’ve got fires banked down in you” speech, Cukor had visiting playwrite Noel Coward tell him right before the shot how “devastating” he was. And, although the words are a little high flown, (and directly from the play, suitable to a poetical short story author) it is certainly one of Stewart’s more erotic on screen moments. He said later, “When you work with Grant and Hepburn, you work. You let up for a second and they’ll steal the movie from under your nose! They’re the best sort of competition you can have. Talent like that keeps you on your toes” (Eyles).

Stewart won a Best Actor Oscar for this film, his only one. His competition was Henry Fonda in the The Grapes of Wrath, Charles Chaplin in The Great Dictator, Lawrence Olivier in Rebecca (the year’s Best Picture) and Raymond Massey for Abe Lincoln in Illinois. Imagine! Many thought Stewart should have won the previous year for Mr. Smith Goes to Washington, and Stewart’s old friend Fonda should have won for Tom Joad the year of The Philadelphia Story. Stewart’s father called after the Oscar ceremony to say, “You won some kind of prize. I heard it on the radio.” Stewart explained the honor and his father replied, “Well, that’s fine, I guess. You’d better send it over. I’ll put it on show in the store where folks can take a look at it,” and so it ended up in a glass case in a window of the family hardware store in Indiana, PA with various other family mementoes (Pickard). 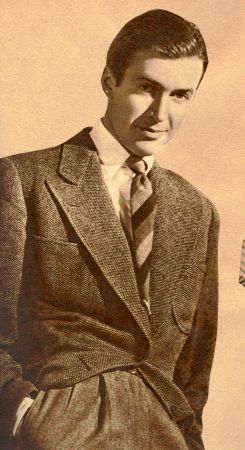 Ruth Hussey said of the experience, “George didn’t say, ‘Well, let’s try it again’ as other directors do when they don’t know what they want. His corrections were more like, ‘a little more color’ or ‘a little more depth’ or ‘lighten up a bit’” Interested in the detail of the performances, like Chaplin, he acted every role himself, which could be disconcerting until the actors got used to it. Her wry performance is a favorite of Moviediva, jr.

Rootie-tootie teen Virginia Wiedler is another of the delights of this film. She had been a child performer since the age of three, and is about 13 in this film. She’s also great as Norma Shearer’s daughter in The Women. Her movie career wouldn’t last much past this film, and she died of a heart attack at the age of 40 (!)

Adrian’s clothes for Katherine Hepburn are amongst the most beautiful cinema wardrobes ever created. Hepburn had been dressed on stage by the New York couturier Valentina, whose clothes were the height of East Coast chic. Adrian went a step further in creating gowns for Tracy Lord suitable for both a Greek goddess and a movie goddess. Gingham was a particular fad of his in the late 1930s, he dressed both Dorothy of Oz and Tracy in it. Tracy’s dresses are bound with cords, as a goddess’ gown would be, or maybe an indication that she needs to unbind herself. By 1941, Adrian had retired almost entirely from Hollywood to design for his own private label. The popular success of the clothes he designed for this film gave him the extra boost to make a debut in the couture business. 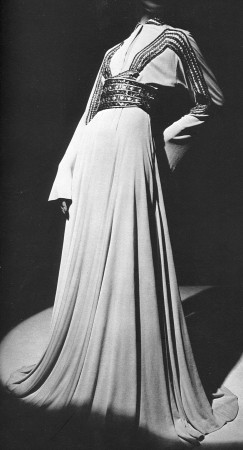 This dress is beaded in gold, appropriate to the Golden Girl

This film was the first video I ever bought, when VCRs were still in their infancy. The Philadelphia Story is one of those perfect moments in the Hollywood studio system, a film that has never been out of style. 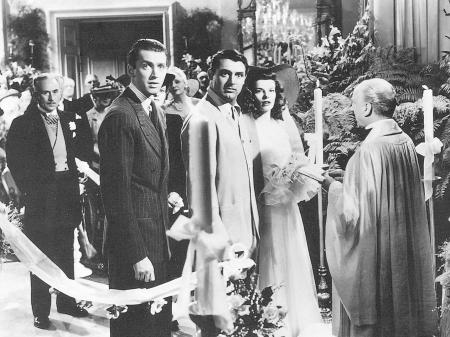