Danny Kean quits the rackets to go legit after a stretch in Sing Sing. He finds his criminal skills perfectly suited to the barely legal antics of a sleazy tabloid newspaper, for whom he becomes the ace “picture snatcher.” There’s nothing like Pre-Code Cagney. Tough, fearless and funny at the same time, he brings an intense magnetism to these early roles. His contempt for his directors resulted in his being the virtual creator of these early films, where his brash and violent sex appeal runs nearly everybody else off the screen.

Picture Snatcher was adapted from ex-con Danny Ahern’s story by Allan Rivkin and P.J. Wolfson, but it was inspired by newspaperman Ben Hecht’s early career in the teens, when he was labeled “the most adept and audacious picture thief in town.” One key episode was based on a notorious incident in which a New York Daily News reporter sneaked a photo from a camera strapped to his ankle at the moment of murderess Ruth Snyder’s electrocution. In a contemporary review, Variety indicated that the fireman’s story (answering a firecall to his own apartment, he finds the charred bodies of his wife and her lover together in bed) which Danny exploits to get his newspaper job, was also based on fact. The paper here is called the Graphic News, an amalgam of the Daily News and the Evening Graphic, a famous tabloid nicknamed the “Porno” Graphic for the tone of its stories. Picture Snatcher is part of a cycle of cynical newspaper yarns including Five Star Final, The Front Page, Hi, Nellie! and a film Cagney walked out of (and was replaced by Lee Tracy), Blessed Event.

Howard Good in The Drunken Journalist writes: “The Depression was, by almost any measure, the Golden Age of newspaper films. Never again would there be so many newspaper films in theaters, never again would they exude so much energy. On screen in the 30s the newspaper office would become ‘a great place’ where star men traded humorous insults with their editors and brash girl reporters rushed in with murder clues.” One reason for this was that so many newspaper men went Hollywood at the start of the talkies. Ben Hecht and Charles MacArthur wrote the groundbreaking play The Front Page (also based on Hecht’s early experiences) with the rapid patter, snappy pacing and tension between the comic and sordid that is the hallmark of the genre. The Front Page was made into a film in 1931 and director Lewis Milestone wanted Cagney for the part of newshound Hildy Johnson, but producer Howard Hughes (who hadn’t yet seen Public Enemy) refused, calling him “a little runt.” Pat O’Brien got the part with Adolphe Menjou as editor Walter Burns. It’s more famous in the gender-switched version, His Girl Friday, with Cary Grant as Burns and Rosalind Russell as Hildy.

Reporters were useful movie heroes because they encounted all social classes in their jobs; the most famous is madcap-heiress-chasing Clark Gable in It Happened One Night. As the Hays Office began to crack down on gangster films, and on Cagney in particular, reporters could still be rewarded for their unethical behavior (they were working stiffs, after all). “Like the gangster,” writes Thomas Doughtery in one of my favorite film books, Pre-Code Hollywood, “another fast-talking, disreputable denizen of the urban underworld, the newspaperman was ethnic and declasse, chatty and cynical, hard-drinking and insubordinate.” The City Editor of the Graphic News, played by Ralph Bellamy, is the Drunken Journalist here; he knocks back slugs of booze poured into little envelopes, then crumples and throws them away. One does worry that he’ll get a nasty paper cut on his lips. 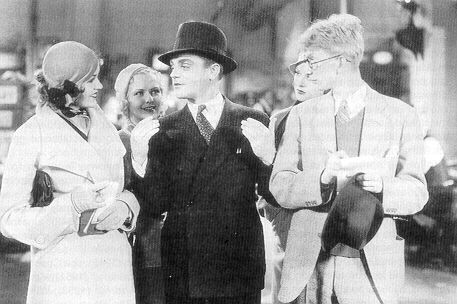 Cagney was impatient with the films he considered beneath his dignity, “programmers” like Picture Snatcher and Blonde Crazy that Warners cranked out at astonishing speed in the early 30s. He told Richard Schickel, “What it amounted to, really, was doing factory work, andwe just did itWe worked all the time, six days a week, sometimes sevenSee, the misapprehension people labor under is that they think they were all great, well written, whatever. Not so. They were (off the) cuff operas, that’s all. And, as these holes appeared, or seemed to appear, we would adjust and do something else.” Dialogue, costume, the business that he called “goodies;” sometimes whole scenes were added by Cagney and the other actors when they felt it was necessary. A film like Picture Snatcher might have been not just unredeemably tawdry but awfully dull without them. His dissatisfaction with the Warners’ treatment lead directly to his activism in the formation of the Screen Actors’ Guild.

Michael Freedland, in his 1975 Cagney biography, writes of Cagney’s preparation for Picture Snatcher, “For days, Jimmy sat in the city room of a Manhattan newspaper, watching reporters and photographers go out on assignments. In the paper’s darkroom, he studied the way pieces of wet paper gradually became photographs.” Considering that Cagney rarely even had a day off between films, this has the aura of fan magazine piffle. He had, however, worked briefly as a copy boy for the New York Sun when he was fourteen. 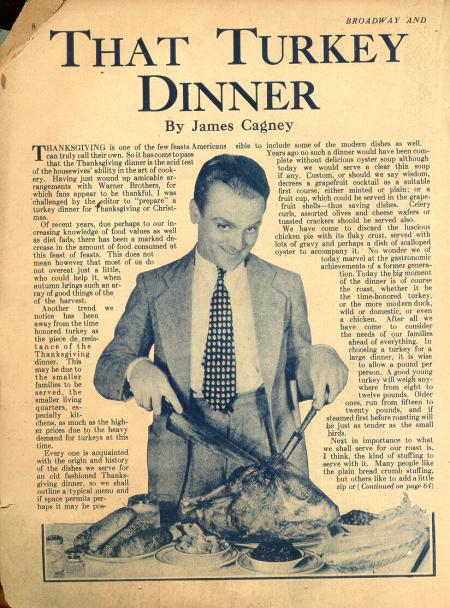 In his autobiography, Cagney wrote: “By this time–1933–we were shooting movies in seventeen days, eighteen days, twenty-one days. Hell, we could have phoned them in. Lloyd Bacon actually shot Picture Snatcher in fifteen days. I used to kid him by saying, ‘What are you doing, getting a bonus for bringing it in ahead of schedule? ‘ One of those fifteen days, I was just walking through a scene with Ralph Bellamy, laying out what I was going to do. I stood outside a door, waiting for my cue, bounced in and went to Ralph’s desk. We did our words, there was also a phone call during it, and then I had some more words, and then out of the room. Suddenly I heard Lloyd yell, ‘Cut–print it!’ I said, ‘Hey, you–I was rehearsing!’ ‘It looked fine from here,’ he said. That was the ultimate efficiency–shooting a damned rehearsal!”

Viewed today, these films have so much energy, so much dialogue, so much recklessness, that it is inconceivable that they were often dismissed as “more of the same” by both contemporary reviewers and modern biographers (not to mention their stars). Condemned as competent or conventional, they have more juice than just about any current film. Perhaps part of the problem for biographers is the necessity of watching so many films in quick succession at an archive or studio. William Haines’ biographer, William J. Mann, told me that he was granted only a brief time to watch Haines’ many MGM films at Turner Classic Movies, so he watched as many as he could every day. Under those circumstances, even an adored actor’s roles may appear repetitious.

Cagney’s biographers must have had similar troubles. Patrick McGilligan identifies the heroine of Picture Snatcher incorrectly in both photo and text, labelling a picture of Alice White as Patricia Ellis, and identifying “his righteous girlfriend” incorrectly as Alice White. John McCabe’s book captions a picture of Cagney and Barbara Rogers as Cagney and Ellis. Richard Schickel gets the heroine of Picture Snatcher right, but inexplicably confuses Ruth Donnelly and Ruth Chatterton in describing his previous film, Hard to Handle. His biographers are fascinated with the scenes in which he uses his fists, just like 1930s audiences (Cagney had trained briefly as a boxer, as well as being a resourceful street fighter as a kid) . In the days before stunt coordinators, the actors worked out the fight scenes themselves. Nearly every writer tells one or both of these stories: Alice White leaning into a sock instead of keeping still and really getting clipped, and Ralph Bellamy, who had never thrown a punch in a film before, miscalculating and hitting Cagney so hard his tooth was chipped.

Bellamy told an interviewer late in his life, “On Picture Snatcher, I permanently changed his appearance. I was the drunken city editor and he the hot reporter. I’m strong, and he’s so small and light, I misjedged during a fight scene and knocked a chip off one of his teeth. But, he could take it, and we even had to retake the shot because it looked so tame” (Tibbetts and Welsh 33). 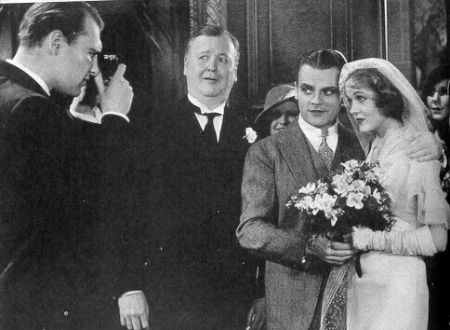 Cagney rocketed into the national consciousness by slamming a grapefruit into Mae Clarke’s face in The Public Enemy. His mistreatment of the women in Picture Snatcher adds to his repetoire of impulsive assault. There are three main female characters, two of whom are quite sexually aggressive. Connie (Barbara Rogers) a gun moll from the old days, tries to vamp him, but he shudders; he’s “finicky” in spite of her tempting him with a silk negligee so fine “you can almost see through it.” Allison (Alice White) is off limits because she’s his best friend’s girl, even if she protests she’s got too much vitality for just one man. She lies on top of him, trying to kiss him into submission, as he squirms and orders her to “cut it out!”

But “good girl” college journalism student Ellis is clearly out of her league. Her dad, the prototypical Irish cop, has already put six slugs in her beau while arresting him, after all. Danny picks her up with a line of hot type fresh from the linotype operator’s machine; indicating perhaps that he’s too hot for her. The dismissive interactions with the “bad girls” reflects the restraint of the real Cagney, who neither smoked nor drank and was married to the same woman from 1922 until his death in 1986. And needless to say, he became annoyed with the parts that had him slap dames around in film after film. In all the biographies and other Cagney material I’ve read, only 30s starlet Jean Muir, in an interview with William Drew in At the Center of the Frame has ever described him as a “skirt-chaser,” although he never made a pass at her. She does goes onto say that she admired him more than anyone else in Hollywood. I wonder, as an aspiring “serious” actress, she was simply too obtuse to get a joke. 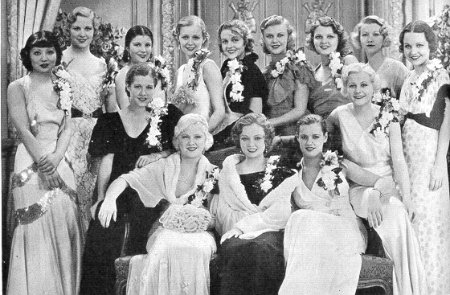 James Woolcott, in an article in the April 2001 Vanity Fair, muses that Pre-Code films are having a Renaissance because, at barely over an hour long, they are short-attention span classics for a web-surfing age. (I loved his article, by the way, and it’s a fab Pre-Code overview) But, of course, it’s a lot more than that. They’re naughty, they have great cars and clothes, and everybody speaks in an obscure argot that now seems to be an extra-terrestrial language (Planet Wisecrack). The familiar supporting casts provides sustenance, (especially Ralf Harolde as Jerry the Mug) but nothing’s more satisfying than Cagney’s fierce charisma.

“Patricia Ellis is ready for luncheon in this tailored acquamarine crepe frock, with its quaint lace jabot draped around her slender neck and drawn demurely through the unique panel arrangement on the blouse, in the style of the moment”–February, 1934, Silver Screen Magazine.

(Mysterious photo of Cagney carving a turkey from Broadway and Hollywood Movies, Oct.-Nov 1932. Don’t ask. Picture Snatcher still is a posed scene not in the film, from Ralph Bellamy’s autobiography, When the Smoke Hit the Fan (1979). Cagney, Ellis and Holloway from the June, 1991 Films in Review. Photo of Wampas Baby Stars from Daniel Blum’s A Pictorial History of the Talkies (1958). There’s a great article about Wampas Baby Stars in the February, 1970 Films in Review. Joan Blondell, Karen Morley and Marian Marsh were Wampas Baby Stars in 1931), “Ralph Bellamy by James Bawden in American Classic Screen, edited by John C. Tibbetts and James M. Welsh.