A family man escapes with the baby sitter in an existential caper inspired by Bonnie and Clyde, and the director’s own proverb, “All you need for a movie is a girl and a gun.” “The epitome of New Wave Pop Art romanticism” (Village Voice).

Cinema is constantly reinventing itself. One of the more significant transformations occurred when a group of young film critics, disgusted with the genteel literary “tradition of quality” they felt stifled French filmmaking, exploded onto the international cinema scene in 1959 with la nouvelle vague or New Wave. Godard’s Breathless (A Bout de Souffle), as well as François Truffaut’s The Four Hundred Blows are the vanguard of this style. These directors adored classical Hollywood cinema (and were the first people to take studio directors like Alfred Hitchcock seriously as artists) but were also steeped in the philosophy of existentialism, which stressed both free will and the absurdity of all human striving. Their heroes were “outcasts, antiheroes and loners” (Lanzoni) and the films reveled in a low-budget aesthetic, off-hand dialogue, outdoor locations, hand held camera, jagged editing, and a new freedom to show sexual activity on the screen.

Jean-Luc Godard was one of the film critics in an iconoclastic crowd including François Truffaut, Claude Chabrol, Jacques Rivette and Eric Rohmer. They were obsessive cineastes who met sitting a few seats away from each other in the dark of Henri Langlois’ Cinematheque Francaise, watching perhaps 1000 films a year. Their shared education, beginning in the early 1950s, moved from the screening room to their articles in André Bazin’s magazine Cahiers du Cinema. Here, they devised the theory of the politique des auteurs (that one man created one film, just as a single author writes a book) and the camera-stylo, the camera as pen. Godard’s remarks in print were described as “unkind, unfair and unreasonable” intended as constructive criticism rather than either fair or admiring. (Richard Roud intro in Narboni and Milne). In 1959, these critics turned directors began to recapitulate a half century of film history in their own work.

In an interview with Cahiers du Cinema, Godard spoke of the “Lolita-style novel” originally printed in the Serie Noir series of thrillers that provided source material for so many French directors in this era. Lionel White’s novel Obsession was about an out of work advertising executive who falls in love with his 17 year old babysitter. The property had floated around Paris for a while, but Godard knew that Stanley Kubrick was filming Lolita and he found the old man/young girl plot “more pathetic than tragic.” He originally wanted to make it with pop singer Sylvie Vartan, but she refused. Godard considered Richard Burton for the lead, but decided he was too Hollywoodisé. He kept the 1930s film You Only Live Once directed by Fritz Lang and starring Henry Fonda and Sylvia Sidney as his inspiration. He wanted his characters to echo other doomed romantic couples from literature. Marianne would represent the active life, and Ferdinand the contemplative. “Marianne knows exactly what she wasn’t and Ferdinand only knows he wants her” (Roud).

The beginning was planned, but the second half of the film was improvised. “I have never been so worried as I was two days before shooting began. I had nothing, nothing at all. Oh well, I had the book. And a certain number of locations. I knew it would take place by the sea. The whole thing was shot, let’s say, like in the days of Mack Sennett. Maybe I am growing more and more apart from one section of current filmmaking. Watching old films, one never gets the impression that they were bored working, probably because the cinema was something new in those days. Whereas today, people tend to look on it as very old. They say, ‘I saw an old Chaplin film, or an old Griffith film,’ whereas no one says, ‘I read an old Stendhal or an old Madame de la Fayette.’”

A famous interview in Cahiers du Cinema ran as follows (in part):
Cahiers: Pierrot, in any case, will please children. They can dream while watching it.
Godard: The film, alas is banned to children under 18. Reason: Intellectual and moral anarchy.
Cahiers: There is a great deal of blood in Pierrot.
Godard: Not blood, red. (Narboni and Milne). 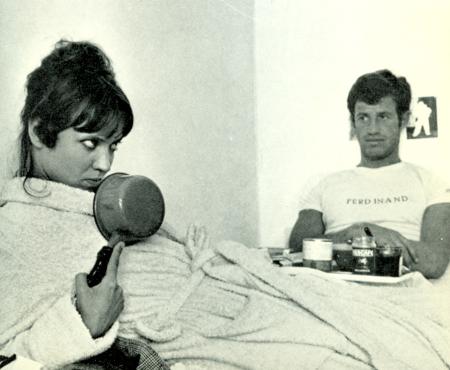 Godard made 8 features and 4 short films in the six years after Breathless, films that varied in subject matter and style. Pierrot le Fou was controversial when it was released in 1966, but would be, for many film lovers, their favorite Godard film of all. It is “a striking, experimental and innovative film that is as much of a thriller as it is a probing of cinema and language, an autobiographical diary, an exploration of love, and an analysis of a disjointed world” (Paris). As skilled as Godard was utilizing the conventional grammar of film, he subverts it, avoiding the usual structure of the flashback by moving back and forth in time within the same shot.

Pierrot le Fou scrambled the plot as well as the time line of a conventional gangster film, and uses many allusions and quotations. The name that Marianne gives Ferdinand, Pierrot, refers to the character of the fool in French pantomime. There are references to Johnny Guitar, Laurel and Hardy, Renoir’s La Chienne, Pepe le Moko, the Spanish painter Velasquez, Balzac, Van Gogh, Picasso, James Joyce, Samuel Fuller, and Jacques Prévert, the director of Les Enfants du Paradise. Samuel Fuller, encountered at a party in the film, explains, “The film is like a battleground: love, hate, action, violence, death…in one work, emotion.” For the first time, Godard’s outrage over Algeria is transposed to Viet Nam, and how America’s role as WWII liberator had morphed into that of colonial oppressor. Godard even refers to his own earlier films by echoing dialogue from them, presenting “a festival of self-citations” (Marc Cerisuelo in Morrey). Jill Forbes calls it “a post modern film before post modernism was invented” (Morrey)

Retaining its ability to shock and confuse 40 years after its release, Pierrot le Fou turns a conventional thriller plot inside out. Characters say and do things for no discernable reason, sometimes staring directly into the camera. The film is surreal, gorgeously shot with an emphasis on a Pop Art primary color pallette, but intentionally obtuse, and, let’s face it, annoying and chilly. What does it mean? I was asked after the screening at the NC Museum of Art. Whatever you wish it to mean is the only possible reply. 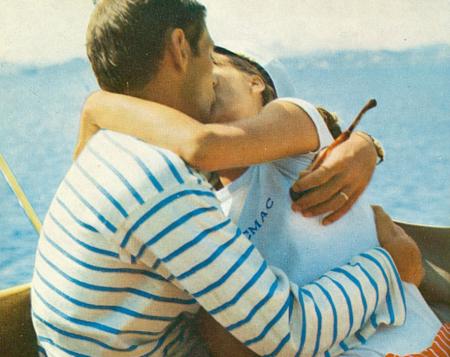