Rose Pamphyle is passionate about her typewriter.  Leaving her village for the big city, her keyboard skills inspire her debonair boss to train her for the 1958 speed typing championship of France.  This candy-colored Mad Men era rom com bon bon evokes the stylishness of classic Hollywood, which critics compared to the best of Doris Day and Rock Hudson. “Populaire has an abundance of charm” (NY Times).

The sexual revolution of the 1960s was transformative to the culture as a whole, and mostly for good, ridding society of the mandatory guilt and shame that accompanied pre-marital sex.  But it was a disaster for romantic comedy.  Once there was no longer a sensible reason to keep a couple out of bed, the genre devolved into disaster.  The last 20 years have been particularly dire, with couples deceiving each other in icky ways, hardly recreating the electricity of It Happened One Night or The Philadelphia Story.

Setting a story in the past heyday of the romcom is one way to circumvent this plot difficulty. Peyton Reed’s Down With Love is a lot of fun, and Austenland, too, looks to the past to reinstate romantic complication.  Populaire, set in the late 1950s, allows first time director Régis Roinsard to write with vintage flair, and comment on the genre at the same time. 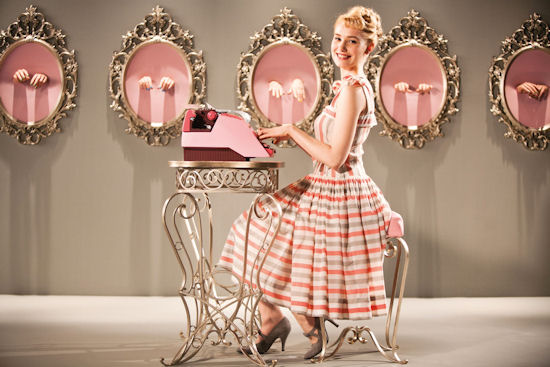 Ronisard began by studying the history of the typewriter.  The invention provided a boon for feminism.  Women didn’t have to work on farm or in factory, they could work a respectable “white collar” job in business outside the home. Generations of women found personal freedom through office work, even though later feminists found it demeaning. The days when women could imagine themselves as the boss were still in the future. Roinsard was particularly fascinated by the actual typing contests that occurred at the time.  These competitions were a spectator sport. Roinsard saw one in a documentary between the Canadian and American teams watched by thousands of viewers.  Becoming an accomplished secretary created a leap in status for women, but these competitions did more, creating a female sporting event.  It was a way for him to meld romance with the sporting film, and he staged the contests as if they were boxing matches.

He loves the elegant look of the 1950s, an era that is extremely well documented in print, photography and in film.  Most sets are carefully designed and constructed (including exterior streets) and a huge number of typewriters had to be recruited, renovated and touched up to look new.  All the typing extras not only needed to look good in their hair, make up and wardrobe, but actually had to be able to use a quirky half century old typewriter. If you’ve never used one, it is not easy, it takes strength, and coordination to keep keys from jamming. It’s quite different from using a computer keyboard; each machine has its own touch and idiosyncrasies, and extras needed to be able to type smoothly and speedily without ruining the takes. 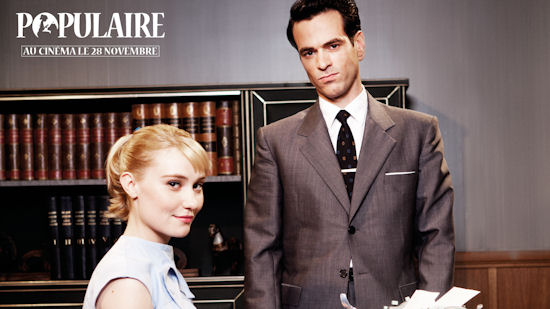 Régis Roinsard said, “I love the style of that period. I love the dress, the cars, the design, the elegance – all that stuff. And the movies, like Billy Wilder, Douglas Sirk, the story telling of those kinds of movie. But if you think about men and women, I’m not nostalgic about that. I prefer my period.” He denies that he was greatly influenced by the films of Doris Day, “Yes, it’s not my principle [influence] in films. I like that movie [The Thrill of It All], but I prefer the tragedies of Douglas Sirk and Billy Wilder, or Jacques Demy or Funny Face by Stanley Donen and the character of Audrey Hepburn. Sometimes we can talk about My Fair Lady, but I don’t really that movie, it’s strange, because I don’t really like the ending. If you’re talking about a Pygmalion movie, I prefer The Red Shoes (in fact, he gave a DVD of The Red Shoes to his leading actress as a parting gift) because it’s more interesting… and voila! “ (thefilmreview.com). He also watched 60s French films, like those of Truffaut and Demy. The score combines favorites from his personal French vinyl collection and an original score mixing pop and classical music. 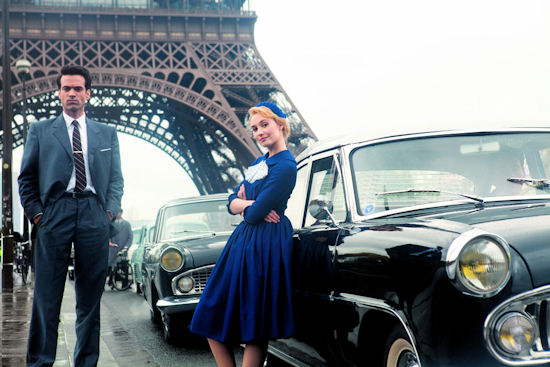 Roinsard actually met with several 1950s-60s ex-typing champions from this long-vanished sport. Like other athletes, they trained, had a coach, the sport had rules and each competition had its own set of challenges.  Actress Déborah François trained for four months, three hours a day, and did come close to breaking the world record of the time, which was about 500 keystrokes per minute.   She was faster at the end of the movie than the beginning, improving much as her character did. None of the typing in the film is speeded up, it’s all real time. Actress François previously played much darker roles, debuting in the Dardennes brothers social realist film, The Child, and loved showing a lighter, funny side to her acting, and to be able to express fantasy.  She watched 1950s films to seem like an actress from the 50s but wanted to give it a modern edge.

Romain Duris, voted one of Frances sexiest men, is more familiar to American audiences, particularly for L’Auberge Espagnol.  He was involved with a play at the time Roinsard sought him out for this film, but was attracted by the enthusiasm of the director and the chance to act in a period film, “like doing your work in a different world.” He researched his role by speaking with a French soccer coach of a small town team, hoping to learn how to inspire confidence in a competitor without crushing hope.  His personal cinema influences included films Chabrol,  Carné and Godard, in part to listen to the different way that the language was spoken.  But, like the others involved in making the film, he wanted to add life inside the reconstitution, rather than being too precise.

The most familiar player is Bérénice Bejo, Jean Dujardin’s co-star in OSS 117: Cairo Nest of Spies and the Academy Award winning The Artist.

Much to my delight, Populaire sold out the NCMA auditorium, in part with French and film meet-up groups. Everyone laughed and loved the film, wondering why it was not better known. The audience left with a smile on their faces. My work here is done.

We live in an era where an inordinate amount of cinematic time is spent watching people type.  Yet, never is it as thrilling as it is here. Rose masters the “machine made for a woman” with two fingers. “It will be a keyboard world” a character opines, the computer age as yet undreamed of.  The delightful Populaire is a Pygmalion-inspired, macaron-colored rom com pondering love, feminism, daddy issues, wartime survivor guilt, Hitchcock’s Vertigo and a skill, once though perfect only for dainty feminine hands, which now rules the 21st century. 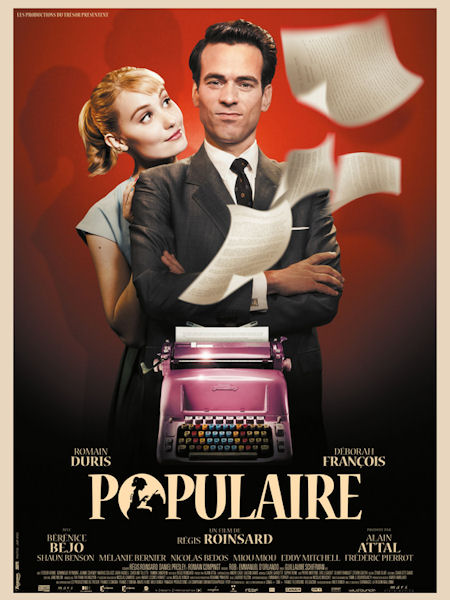 http://thefilmreview.com/features/populaire-interview-regis-roinsard-deborah-francois-romain-duris/, http://www.cineoutsider.com/reviews/films/p/populaire/ (Sadly both these links are broken) also You Tube “making of” featurettes en Français.