Sex, money and murder rule at the Bates Motel, in the annual North Carolina Museum of Art Alfred Hitchcock birthday tribute. This chilling glimpse of an aw-shucks, knife wielding boy next door still makes blood run cold—right down the drain. If you haven’t seen this for a while, or if you never have, you’ll be surprised at how enduringly powerful this black and white Freud fest remains.

Alfred Hitchcock completed an extraordinary run of superbly glamorous thrillers, like Rear Window, Vertigo and North by Northwest by 1960. He was also a household name and face, famous for his “Alfred Hitchcock Presents” television series. For a change, he decided to imitate the style of the hugely profitable cheapie exploitation films flooding the drive-ins, but do it brilliantly, using black and white film and quick television techniques. He also wanted the film to be a rival one he greatly admired, the chilling black and white French mystery directed by Henri-Georges Clouzot, Les Diaboliques. Hitchcock collaborated on the script with Joseph Stefano, a former song writer recently turned screenwriter, who was anxious to learn what he could from the master. Stefano went on to create tv’s atmospheric “Outer Limits.”

Robert Bloch’s novel Psycho was based on the crimes of real serial killer, Ed Gein. Although the grip of the Production Code, which censored American movies, was loosening, Psycho raised many red flags. New to the game, Stefano wrote bold scenes that a more experienced writer would have known were asking for trouble. The novel began with Marion’s arrival at the Bates Motel, but Stefano imagined a more leisurely introduction to the crimes. The opening scene, with its sweaty, furtive sensuality (and the leading lady in a bra and slip) the murders, the hint of transvestitism, but also the sight and sound of a flushing toilet were no-nos. Hitchcock, as always, decided to film what he wanted and battle it out with the censors later.

In Bloch’s Psycho, Norman Bates was a fat, middle aged loner. But Hitchcock never wanted anyone but slim, sensitive Anthony Perkins to play him. Perkins career was a romantic hero was pallid. Promoted as a replacement for James Dean after his sudden death, Perkins was never at home as a heart throb. He signed on without reading the script, anxious to work with Hitchcock. “He would have done it for nothing, as would any of us,” Stefano later said. Perkins’ homosexuality was an open secret in Hollywood, and that subtext was wrapped up in his eerie performance. While many actors have spoken of Hitchcock’s reliance on storyboards and his lack of interest in his actors, Perkins had the opposite experience. He found Hitchcock receptive to his inclusion of gestures (like Norman’s fondness for candy corn) allowed him to choose his own wardrobe, and even rewrite some of his dialogue, making the deranged mama’s boy almost a sinister shadow of himself. Perkins described the director as “expansive, benevolent, happy, productive.”

Hitchcock wanted a big star to play Marion, in part because of the shock of her murder about 1/3 of the way through the film. No one would be admitted after the film began, in part to preserve this surprise. Janet Leigh began her career as a wholesome ingénue, but she had just made the daring Touch of Evil for Orson Welles, and her Psycho performance is unusually carnal for a Hitchcock heroine. In her autobiography, Leigh, too, says she would have played any part to work with the director.

John Gavin, who plays Marion’s boyfriend (and was later the Ambassador to Mexico under Ronald Reagan) did not interest Hitchcock, who considered him interchangeable with others of his type. Gavin was embarrassed to play the first scene with his shirt off, removed from the historical framework of Spartacus, where he was also shirtless. But, the director used his discomfort to advantage in the scene. Hitchcock told Francois Truffaut that he felt a conventional kissing scene would be laughable in the current moral climate as a way of portraying the couple’s motivation. For Lila, he chose Vera Miles, once his dream of the new Grace Kelly. She was under personal contract to him, but her refusal to be molded into the director’s image relegated her to distinctly unglamorous roles.

The 78 shots in the shower scene comprise one of the most famous 45 seconds in film history, scored to Bernard Herrmann’s screeching violins. The images are so swift and convincing, even the censors couldn’t decide if they saw nudity and bloody knife wounds. Sources say Janet Leigh’s naked body was never filmed, although she says all the shots in the film are her. A more revealing shot of the body double’s bottom was included for negotiation with the censor board. The blood, as so often in black and white movies, is chocolate sauce. Note the repeated use of both bird (beginning with the city of Phoenix) and mirror motifs, the latter used to reflect dual personalities and troubled souls.

Psycho was a bargain, made for $800,000, and Hitchcock deferred his salary against the movie’s profits, a move that made him a rich man. The Victorian house was a standing set at Universal, the Bates motel was built in front of it. Recently, Universal Studios Tour in Florida spent more than 20 times the film’s budget on a $20 million “Psycho Experience” with live actors, clips from the film and a special segment filmed by Anthony Perkins. A film the Catholic Legion of Decency found “morally objectionable in part for all” has carved a lasting place in popular culture.

Hitchcock appears about 4 minutes into the film, wearing a cowboy hat outside Marion’s office. Janet Leigh states in her autobiography, “And, for the record, no, I do not take showers.” 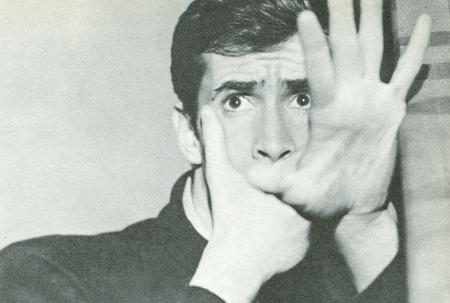 (Photo from The Bad Guys by William K. Everson. Sources include: Hitch by John Russell Taylor, Alfred Hitchcock: A Life in Darkness and Light, by Patrick McGilligan, The Complete Hitchcock by Paul Condon and Jim Sangster, Split Image: The Life of Anthony Perkins by Charles Winecott, There Really Was a Hollywood by Janet Leigh, Hitchcock/Truffaut by Francois Truffaut).