Alain Delon stars as Tom Ripley, a shape shifting charmer freeloading off his rich friends on the sun-baked Italian coast, his calm surface hiding sinister motives. Sensual and opulent, with a La Dolce Vita shimmer, “it lingers in the mind as an irresistibly satisfying slice of worldly enjoyment.” (Criterion essay by Geoffrey O’Brien).

For the next two weeks, we are going to do something unusual, which is watch two different adaptations of the same novel, Patricia Highsmith’s The Talented Mr. Ripley.  Her book was not really considered literature when she wrote it, crime novels rarely were back then, even the ones we now appreciate as classics, by authors like Raymond Chandler, Dashiell Hammett, James M. Cain.  When it came time to choose a favorite version, I couldn’t, and I thought that you, too, would be interested in the comparisons.

Highsmith, the author of five Ripley novels, Strangers on a Train and numerous other novels and short stories, lived an unusual life.  A lesbian at a time when she had to remain publicly in the closet, she presented one face to the world, and was another person in her private life.  “She had experienced at first hand many of Ripley’s characteristics—splintered identity, insecurity, inferiority, obsession with an object of adoration, and the violence that springs from repression.  Like her young anti-hero, she knew that in order to survive, it was necessary to prop oneself up with a psychological fantasy of one’s own making” (Wilson 196). At one time, she willed herself to disappear through anorexia, at another underwent psychotherapy in the hopes of becoming straight, so she could marry a man who had proposed to her.

She was born in Fort Worth, Texas, and shared a birthday (January 19) with Edgar Allan Poe. Her writing owes debts both to him, to hard boiled fiction of the 30s and 40s but also her love for bleak, existential philosophy.  Will Self, on a BBC tv program said, “I think she’ll be remembered as one of the great mappers of the topography of criminal psychopathology, and an anticipator, in a way, of the collective obsession with serial killers and evil that has come to pass, a precursor, if you like” (Wilson 6). Grahame Green, who greatly admired her writing called her “the poet of apprehension…in a world without moral endings…nothing is certain when we have crossed this frontier” (Wilson 7).

She had a miserable childhood, calling it “a little hell.”  Her parents were divorced before she was born (at her father’s urging, her mother drank turpentine to terminate her pregnancy) and she hated her stepfather so much, she constantly daydreamed of murdering him.

She was already acclaimed for Strangers on a Train (and it had been filmed by Alfred Hitchcock) when she wrote The Talented Mr. Ripley was the first of five novels starring the amoral Tom Ripley.  She wrote it quickly, taking only six months in 1954.  “It felt like Ripley was writing it.  It just came out” (Wilson 191). She used as her inspiration Henry James’ The Ambassadors, and her own obsession with identity. “Pretenses when begun early enough become true character…and the curious truth in human nature, that falsity becomes truth, finally” she wrote in 1949 (Wilson 192).  She had seen a handsome young man strolling on the beach in Positano, Italy, in 1952, and in her imagination, wondering about his solitary stroll, split him into two characters.  She was also inspired by a newspaper story in which a man, presumed dead, was discovered attending his own funeral. 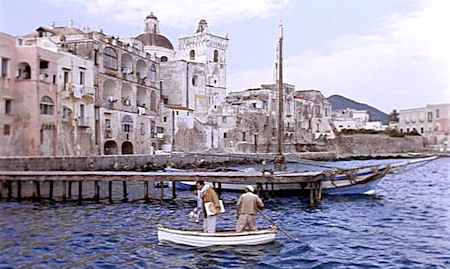 It was not difficult for her to imagine herself as her most famous creation.  “It became a popular book because of its frenetic prose, and the insolence and audacity of Ripley himself. By thinking myself inside the skin of such a character, my own prose became more self-assured than it logically should have been.  It became entertaining” (Wilson 194). He was real to her; some thought she was in love with him, but rather, she thought that she was him, occasionally signing herself, “Pat H., alias Ripley” (Wilson 194).

The Talented Mr. Ripley was published in December 1955, and received many awards, including the Edgar Allan Poe Scroll from the Mystery Writers of American, in a way fulfilling the promise of their shared birthday. When her certificate mildewed from hanging in the bathroom, and when she cleaned it, she added “Mr. Ripley and…” before her name. “I often had the feeling Ripley was writing it, and I was merely typing” she said (Wilson 199).

Susanna Clapp, writing in The New Yorker called her “a balladeer of stalking.  The fixation of one person on another—oscillating between attraction and antagonism—figures prominently in almost every Highsmith tale” (Wilson 5) Highsmith said, “From a dramatic point of view, criminals are interesting; at least at one [particular]moment they act with a free mind, and [feel like they] do not owe anyone an explanation.  I find the general public’s interest for Justice rather dull and artificial, since neither Life nor Nature are concerned about whether Justice has been rendered or not” (Lanzoni 194).

Each director, René Clément and Anthony Mingella, uses his own interpretations and sensibilities to craft the characters and structure the plot.  Purple Noon’s story (or the original French title,  Plein Soleil, Bright Sun, much better) is spare compared to Mignella’s version.  Here, we discover Tom Ripley and Dickie (here named Phillipe) Greenleaf already friends, whiling away the time and the Greenleaf fortune in Italy. Meeting Dickie’s father, and have him hire Tom to bring his wayward son home, has already happened before Purple Noon begins.  Highsmith’s original intention was for us to sense the unfairness of Dickie being privileged, and Tom, not. The actors strongly influence how the characters appear on screen.  Purple Noon’s Dickie is rich, but mean spirited, a bully.  Jude Law’s Dickie Greenleaf in next week’s film is an unattainable ideal of ease and golden beauty. By the first 8 minutes of Mingella’s film, Ripley has started to assume Greenleaf’s identity.  In Clemènt’s version, Alain Delon is watchful, and his path to crime is through a more slowly evolving discovery.  Clemènt’s focus is on the subtle emotions on Alain Delon’s face, and on the sea, the sky and the baked landscape of Southern Italy. 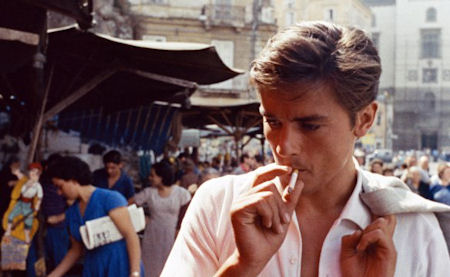 It was producer Robert Hakim who suggested to Clemènt that he might find Highsmith’s novel interesting to adapt.  “I was immediately attracted to the novel’s ambiguity and feeling of uneasiness, which are constants in Highsmith’s work.  Those who try to cultivate ambiguity in the thriller genre don’t always succeed, but Highsmith achieves something quite deep, and genuinely successful” (Clement 19).  Hakim paid $12,000 (or perhaps $15,000) for the film rights.

Highsmith was much less concerned with the plausibility of the plot, but this is a luxury that a director cannot take.  Clemènt had to make the story believable. Unlike Hitchcock, who diagrammed his version of Highsmith’s Strangers on a Train meticulously, there was a certain amount of improvisation on the set, and even scenes written during lunch, to make things make more sense.  Another challenge is to make Ripley a sympathetic character, never mind that Delon is so gorgeous that one is inclined to sympathize. “He is a horrible guy, but you don’t make films with despicable people—that doesn’t work.  People want to relate, they want to identify, I’m stating the obvious. So, how will I make Ripley likeable.  By humiliating him…Humiliate is always lurking in the background symbolically.  It’s what gives Ripley heft” (Clemènt 24). 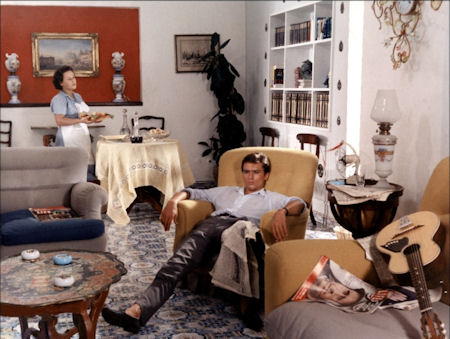 This was in sync with the author’s vision, She thought the true 20th century everyman was the psychopath.  She wanted to write a novel, seen through the eyes of someone “abnormal” with whom the writer sympathizes so much that the reader identifies completely.  She thought only stupid people were content.  “I believe people should be allowed to go the whole hog with their perversions, abnormalities, unhappinesses…Mad people are the only active people, they have built the world” she wrote in 1942. This philosophy was one reason that her books were not popular in their day, her amorality in some ways runs counter to the crime and punishment mode of detective fiction.  There are not really any likeable characters.

Delon was not a major star, and was originally considered for the part of Phillipe Greenleaf, played by Maurice Ronet.  “Alain became Ripley more and more, following everything that was said to him to the letter” (Clemènt 27) a skill that the character of Tom Ripley also has, making this a perfect fit.

Filming at sea is a difficult problem, and the tremendous shipboard scenes are amongst the most memorable in the film.  Clemènt was an experienced sailor, himself, otherwise he never would have risked filming the scenes on the ocean the way he did, especially when taking advantage of an unexpected storm. One difficulty is that the sea changes color depending on the angle of filming, so you have to use the color of the sky to make the colors seem the same.  Henri Decaë, famous for his incredible black and white photography in many of the French New Wave films, was quite daring in his shooting, with 20 people out of sight inside the boat, and Delon, seasick, trying to keep his footing.  Of course, at sea, nothing can be planned.  “I was in my own reality, and Alain, carried away by everything that was happening, gave us the scene you’ve watched” (Clemènt 30). 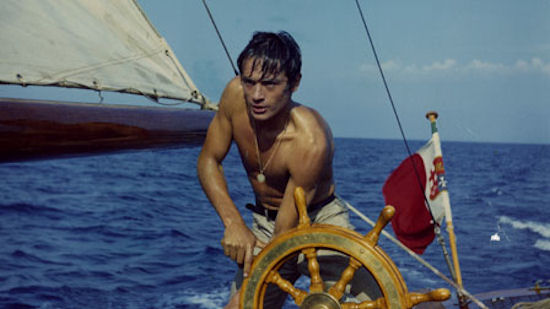 “The passage of time has only accentuated that allure, since the Italy we sample here in such generous detail is a vanished tourist’s dream, underpopulated and unpolluted, a paradise for footloose Americans: the seaport waterfronts teeming with fresh-caught fish, the bodies bronzed from long and carefree afternoons in the sun, the luscious blues and greens of a sea made for open-ended yachting excursions” (Criterion essay by Geoffrey O’Brien).

Highsmith found the film “very beautiful to the eye and interesting to the intellect” (Wilson 224) and thought Delon was well cast as Ripley.  But, she was dismayed at the new ending they devised, and, of course the gay themes so important to her written work could not be explored.

“The mechanism of intrigue, filled with ingenious turns suggestive of Hitchcock’s greatest thrillers, becomes increasingly more intricate as the story unfolds and creates an involuntary uneasiness among viewers… Clemènt…did more than draw the spectator into a well written scenario of psychological suspense, he also focused the entire film on Tom’s narcissistic progression to such a degree that it became difficult for the spectator not to wish for Ripley to go free (Lanzoni 192). 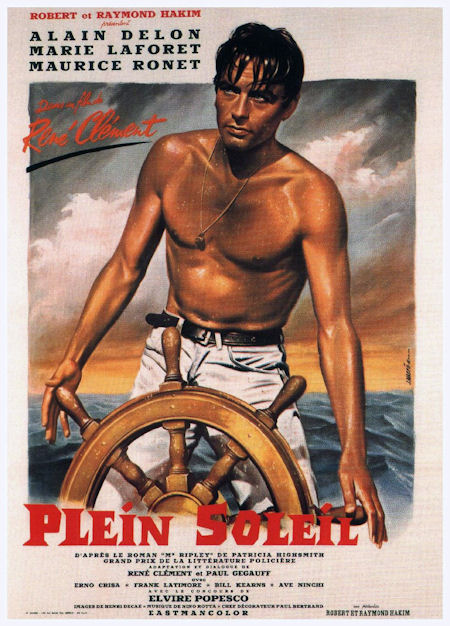 Criterion essay by Geoffrey O’Brien, Interview with René Clément, Feb 1, 1981 L’avant-scene, reprinted in Criterion booklet, Beautiful Shadow: A Life of Patricia Highsmith by Andrew Wilson, “The Master: Remembering Phillip Seymour Hoffman” by Anthony Lane in the Feb 17 & 24 The New Yorker, French Cinema: From Its Beginnings to the Present by Rémi Fourner Lanzoni.