A sultry music hall coquette has a rendezvous with a sleazy promoter, and when he winds up trés mort, her long-suffering hubby is suspect #1. Clouzot (Diabolique) explores the shadows of Paris “a knockout …you can almost smell the cigarette smoke drifting over rain-drenched streets.” (Kenneth Turan LA Times) Restored print from Rialto Pictures.

Director Henri-Georges Clouzot is known as the French Alfred Hitchcock, a reputation based largely on two nail-biting suspense films, Diabolique and The Wages of Fear. This film was unseen in the US for 50 years until Rialto Pictures discovered and restored it and added Lenny Borger’s deliciously slangy subtitles. This policier noir musical was not taken seriously in the US, plus, it dangerously tweaked the Production Code with its depiction of sexual desire and unconventional families. “Lesbianism and miscegenation! Call the Legion of Decency!” (Andrew Sarris New York Observer).

While working as a journalist, Clouzot began writing sketches and songs for the French music hall, and then drifted into working on French language musicals made by the German studio, UFA. During the war, he headed the script department of Continental Films, financed by the Germans in France. He scripted a number of popular films, including two suspense films based on novels by prolific pulp writer Stanislaus-Andre Steeman. In 1943, he made Le Corbeau, a misanthropic film about an anonymous poison pen campaign in a French village, a metaphor for French citizens collaborating with the Nazis. The Nazis hated its anti-authoritarian slant and the French considered it unpatriotic propaganda. After France was liberated, the film was banned, and Clouzot was blacklisted.

Four years later, a producer agreed to finance a comeback film for him, provided it was a commercial one, and Clouzot suggested a novel by his old standby Stanislaus-Andre Steeman, Légitime Defense, which he had read during the Occupation. Like Georges Simenon, whose books inspired many films noir in France, Steeman helped introduce more realism into the crime novel. But this novel was out of print, and Clouzot and his script collaborator Jean Ferry were forced to improvise. This included changing the identity of the murderer, and the addition of photographer Dora Monier. Although the author was dismayed at the alterations (he’d sent a copy to Clouzot as quickly as possible when asked) the director did create a densely detailed portrait of the music hall and police station, based on his own theatrical experience and the two weeks he had spent at the real Quai des Orfevres (the French equivalent of Scotland Yard) with his production designer, soaking up the atmosphere.

Max Douy’s detailed production design and Armand Thirard’s glistening photography depicts the dingy atmosphere of Paris’s post war music halls, and the claustrophobia of police headquarters. The film also is a record of post war deprivations, with its black-market trade in butter, and the lack of heat creating a fashion for the indoor overcoat. The starkness of post-war life in Paris is one of the most interesting qualities of the film, creating a virtual time-travel experience. The costumes are by couturier Jacques Fath, a tremendously talented designer whose early death makes him less well known that his contemporary, Christian Dior. “He had always been drawn to the sassy style of young shopgirls like Suzy Delair, as she worked her magic “tra la la” in Quai des Orfevres, but that flirtatious appeal was always tempered with a mysterious grace…” (Savignon 13). Another one of the few films he designed is The Red Shoes.

Lenny Borger researched the film’s racy dialogue by consulting with a former Paris police inspector, as well as French and American crime novelists. He collaborated with a songwriter for the lyrics of the songs (which had not previously been subtitled), as well as film historians, screenwriters, and even elderly Max Douy, the production designer. 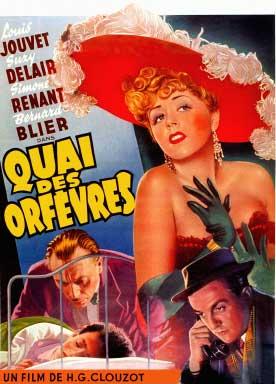 Clouzot’s mistress and muse, Suzy Delair, plays flirtatious Jenny Lamour. Her signature song, “Avec Son Tra-La-La” was commissioned by Clouzot and became Delair’s signature. Jenny is loved devotedly by her husband, but also from afar by Dora, a gorgeous female photographer, one of the many striking individuals in the film. She was played by Simon Renant, considered at the time “the most beautiful actress in Paris.” Detective Lieutenant Antoine, played by the noted stage and film actor Louis Jouvet, is another unusual character. A dogged investigator, he is also a caring father to his teenaged mixed-race son, a souvenir of his days in the French Foreign Legion. This fact alone might have had the film banned in the US.

85-year-old Suzy Delair spoke to the NY Times in 2003 about the film’s rerelease, “He met me when I was a little debutante, working with Mistinguett,” (the great French cabaret star). “He adored Mistinguett, and he came to one of her shows, where I was singing one of her great successes, `Valencia.’ And he put a cross next to my name. The next time he came to the show, he waited for me at the exit, and we went for a drink. And that lasted for 12 years.”

This intimate interlinked portrait of the theatrical and police milieus shows a devotion to the psychology of a group of linked characters and was compared to the complexity of Balzac’s novels. It was a hit in France, although ignored in the US, under the title of Jenny Lamour. The detecting part of the murder mystery is less important than evoking a seedy post-war ambiance. Clouzot won the Best Director prize at the Venice Film Festival in 1947. 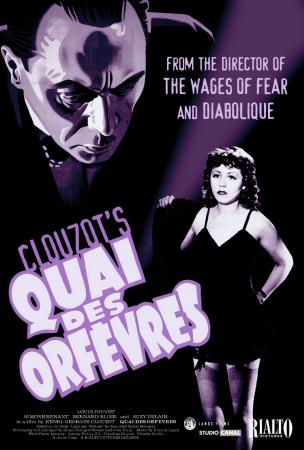