In a medieval forest, there is a rape and a murder. This seemingly simple story is told in four hypnotic flashbacks, each telling one version of the truth from a different point of view. Who can be believed?

Director Akira Kurosawa was born in Tokyo in 1910, the youngest of 7 children. His father was strict, a military officer, but was also receptive to Western culture at a time when many educated Japanese were not. He took his family to European and American films in Tokyo and his children were raised on a beloved 78-record album of “The World’s Best Classics.” Kurosawa’s rebellious older brother, Heigo, wrote on foreign cinema, and was a benshi providing narrative descriptions at silent film screenings. These storytellers interpreted foreign films for audiences, supplying plot, character and sound effects. They had devoted followings, and silent film lingered in Japan long after other countries abandoned silents for sound. Heigo’s suicide when Akira was a young man affected his brother deeply.

At first, Kurosawa wanted to be a painter, but he found it difficult to make a living. He accidentally saw an ad in the newspaper: a movie studio was looking for assistant directors. He hoped this was a way to end his financial dependence on his parents. There were over 500 applicants who were asked to do a film treatment of a story in a newspaper clipping, but only a few made it as far as the oral examination. In his autobiography he said: “I had dabbled eagerly in painting, literature, theater, music and other arts and stuffed my head full of all the things that come together in the art of film. Yet, I had never noticed that cinema was the one field where I would be required to make use of all I had learned. I can’t help wondering what fate had prepared me so well for this road I was to take in life.”

Kurosawa worked as an assistant director for several years. His first film as a director, the judo adventure Sanshiro Sugata (1943) was a big hit. Drunken Angel (1948) marked the beginning of his collaboration with his long-time star, Toshiro Mifune. Rashomon won raves in the international press as well as the 1951 Oscar for Best Foreign Film. His films were not autobiographical as are those of many great cinematic auteurs. He wrote his own scripts (in collaboration with other screenwriters) and never made a film on assignment. His films emerged from his own fertile imagination. In interviews, he was reluctant to speak about his work, saying, “Everything I have to say is on the screen; a filmmaker should not step out in front of it and talk about his work” (Bock).

Rashomon was based on two short stories by symbolist writer Ryunosuke Akutagawa, an author popular in early 20th century Japan. “Rashomon” takes place under the gate of the same name, the largest one in Kyoto, the ancient capital of Japan. The majestic, crumbling structure and the rain-soaked atmosphere originates with this story. The plot, with its multiple points of view, can be found in a second story, “In a Grove.” Kurosawa realized that in order to keep the audience interested in the same tale told several times, it would be necessary to use creative visual flourishes. He was inspired by the pictorial beauty of silent films and wished to recreate their style. The long stretches without dialogue may have been one of the factors contributing to the film’s worldwide success, as silent film had been much more of an international cinematic language than talkies were. Ironically, Rashomon brought some retired silent film benshis back to the theaters, as worried theater owners felt a narrator might demystify the film’s story structure for their audiences.

Cinematographer Kazuo Matsuyama was challenged to create a unique look for the film, which he did both with a series of complicated tracking shots recreating the experience of being in the forest, and memorable lighting. A mirror purloined from the costume department directed sunlight and a screen with leaves attached created custom shadows. Some of the sun-dappled Nara forest scenes defied the conventional wisdom that you couldn’t photograph directly into the sun. Director Robert Altman said the day after seeing Rashomon, he went to work on the tv show he was directing at the time and copied this shot, pointing his camera at the sun. This shot has become a standard element of cinematic language, appearing in countless films and tv shows. Rashomon takes place in an untouched forest, filled with beautiful trees and vines, but in fact, it was also infested with mountain leeches, which dropped out of the trees and crawled out of the soil in search of blood. But, in spite of the inconvenience, the youthful director and his cast worked with great enthusiasm, enjoying the beauty and mystery of the remote location. The audience is transported into the reality of this forest environment and is then challenged when several contradictory narratives confront the idea that you must accept what you see in a film as true. Each vignette is self-contained, and Kurosawa refused to make a synthesis of the stories easy. “Never before was the flashback used with such provocative effect; the truth was enriched by each successive challenge to our imagination” (Parker Tyler).

Toshiro Mifune’s most famous roles were in collaboration with Kurosawa. In The Seven Samurai, Yojimbo and The Hidden Fortress, his electrifying performances fascinated both Japanese and foreign audiences. In Rashomon, Bosley Crowther in his New York Times review wrote that Mifune played the bandit with “terrifying wildness and hot brutality.” The director and his cast passed the time watching movies while waiting for the set to be built in Kyoto. One of them, a Martin and Osa Johnson ethnographic film about Africa, contained shots of a pacing lion, and the director wished his star to incorporate a similar animalistic feeling into his performance. Many previous Japanese heroes had been considerably more passive and Mifune’s raw interpretation seemed to define “Japaneseness” for many of his countrymen. Machiko Kyo, playing the wife, was an unusual casting choice, since Japanese heroines were usually sweet and modest. She was considerably more sexual and was considered to be the “Jane Russell of Japan” that cinema’s first “bad girl.”

Japan was shocked when this film won the first prize at the 1951 Venice Film Festival. Rashomon had not been well reviewed at home. And there was a long-standing belief that those outside Japan were incapable of understanding those works of art not specifically tailored for them. Japanese critics thought the film was not an adequate adaptation of the stories, that the language was too rough (and that the bandit had too ornate a vocabulary) and that the script was too complicated. American critics were sometimes less than enthusiastic about both the complicated structure, and an acting style for which there seemed to be little point of reference in non-Asian cinema. The Western influenced music was styled after Ravel’s “Bolero,” another familiar quality to audiences outside Japan. But, as the film won prize after prize and was revived again and again, both at home and abroad, Rashomon began to take its place as one of the great classics of international art film. “Admiral Perry and his Black Ships steamed into Tokyo Bay in 1853 and forced the opening of Japan to the West; Akira Kurosawa’s Rashomon came steaming into the Venice Film Festival and opened up the West to Japanese films” (Desser).

The film’s title has entered the language, both in works of art and in actual court cases, as an expression for conflicting eyewitness accounts of a single event. The structure of the film, at first thought so revolutionary as to be incomprehensible, has been adapted, reworked and appropriated countless times. Kurosawa’s pessimism about human nature, so appropriate to a Japan devastated by their recent WWII military loss and devastation by fire bombings and atomic weapons, found universal application.

Before filming began, the three assistant directors said the script’s meaning puzzled them. Kurosawa admonished them with a simple explanation: “Human beings are unable to be honest with themselves about themselves. They cannot talk about themselves without embellishing. The script portrays such human beings—the kind who cannot survive without lies to make them feel they are better people than they really are…You say that you can’t understand this script at all, but that is because the human heart itself is impossible to understand…” 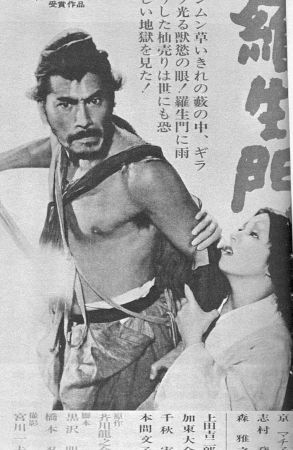