Alfred Hitchcock was the only director of his day most filmgoers knew by name. His face and form familiarized by his popular tv program, Alfred Hitchcock Presents, contemporary critics often denigrated him as too commercial, a mere entertainer. The New Yorker called Rear Window “claptrap” and the single set “foolishness.” Bosley Crowther in the New York Times wrote plainly “Mr. Hitchcock’s film is not significant.” When Francois Truffaut published his admiring book-length interview with Hitchcock in the early 1960s, a young American film professor advised him, “This book will do more harm to your reputation than your worst film.”

Rear Window was adapted from a story in Dime Detective Magazine called “It Had To Be Murder” by Cornell Woolrich, writing as William English. On the surface, the film is a pure expression of 1950s movie magic, with attractive movie stars photographed in lush Technicolor. But, it is clearly intended as an allegory of movie going. James Stewart’s LB Jeffries sits in the dark and watches his neighbors’ apartments as we watch the screen, his observations revealing his fears and fantasies. And, for a Catholic such as Hitchcock, the sins of omission and comission (thinking about doing something bad and actually doing it) are equally wicked.

In Woolrich’s story, the hero had no profession. In Rear Window, he is a photojournalist. Donald Spoto, one of Hitchcock’s biographers (the one with his mind in the gutter) speculated that he was inspired by Ingrid Bergman’s love for photojournalist Robert Capa, a romance observed by Hitchcock while shooting Notorious with Bergman. Spoto suggests Hitchcock was fascinated by Capa’s indifference to a beautiful woman about whom he could only fantasize. Other writers have suggested a closer autobiographical tie is the villain Torvald’s resemblance to producer David O. Selznick, with whom Hitchcock had often tussled for creative control.

Grace Kelly’s character was modelled intentionally on Anita Colby, a cover girl who became an advertising executive at Harper’s Bazaar, then continued her career in Hollywood as a combination fashion and beauty stylist and personal assistant to the aforementioned Selznick. Edith Head did Kelly’s chic wardrobe for Rear Window and it is one of her best. The color of the celadon green suit was specified by Hitchcock, much as he had demanded Kim Novak’s grey one in Vertigo, over Novak’s protests. Head wrote in The Dress Doctor she loved working with Kelly: “She came up the stairs briskly that first day, looking like a girl just out of Bryn Mawr–the whitest of white gloves, the whitest of blouses, the grey tailored suit, the tailored hat, the most immaculate scrubbed look! We’re used to a certain amount of careless dressing in Hollywood; nothing about Grace was careless. Even better than the clothes was the quiet, shy, interested manner; she becomes articulate and gay as she gets to know you, and hers is a childlike ability to be pleased. In the pale frothy negligee of Rear Window, she positively giggled at her image in the mirrors. “Why, I look like a peach parfait!” she said. 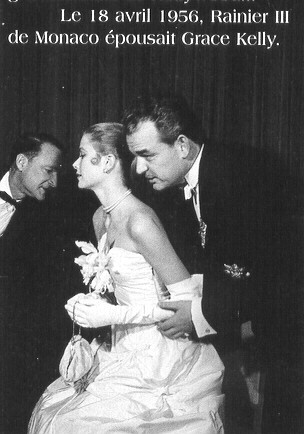 The heart of the film is the biggest, most complex set ever built on a Paramount sound stage, consuming 25% of the film’s total budget. The 31 apartments were lighted individually from a huge console that could simulate both day and night. Rear Window was shot roughly in chronological order. Hitchcock used a short wave radio and the apartment dwellers wore flesh colored headsets, so they could be directed from afar. Their movements were limited, because camera focusing requirements were inflexible, and the actors would go out of focus if they strayed far from their marks. The film takes place during a heat wave partly because all the lights made the stage so hot. But, in pre-air conditioning days, people had to escape the interiors of their stifling flats in summer. James Sanders in Celluloid Skyline suggests that the casual behavior of the courtyard dwellers would never have occurred in the more formal front of the building (the little dog wouldn’t have been let down to wander by himself, for example). The daily rituals of the neighbors do not seem to require privacy, since their ordinariness does not demand particular attention. Stewart stands in front of his window in his pajamas, assuming nobody is looking at him. Of course, the Breen Office censors condemned the “peep show” quality of the script, and were invited to Paramount to see the set for themselves. Satisfied that scenes described in detail in the script would be filmed from afar, they approved, oblivious that to Hitchcock the voyeur’s view of the courtyard was the whole point.

Rear Window is both a murder mystery and a reflection of post-war sexual anxieties. Grace Kelly’s confidently alluring career woman threatens the ambivalent Jeffries, at a moment in time when the likely status afforded a single man reluctant to marry was “latent homosexual.” Stewart’s and Kelly’s male and female perspectives are quite different as they reconstruct events seen through the Rear Window; but sometimes a telephoto lens is only a telephoto lens.

“It was the possibility of doing a purely cinematic film. You have an immobilized man looking out. That’s one part of the film. The second part shows what he sees and the third part shows how he reacts. This is actually the purest expression of a cinematic idea.” — Alfred Hitchcock

“In 1962, while in New York to present Jules and Jim, I noticed that every journalist asked me the same question” ‘Why do the critics of Cahiers du Cinema take Hitchcock so seriously? Hes rich and successful, but his movies have no substance.’ In the course of an interview during which I praised Rear Window to the skies, an American critic surprised me by commenting, ‘You love Rear Window because, as a stranger to New York, you know nothing about Greenwich Village.’ To this absurd statement, I replied, ‘Rear Window is not about Greenwich Village, it is a film about cinema, and I DO know cinema.’ “ Francois Truffaut

(Sources include Alfred Hitchcock’s Rear Window, edited by John Belton for the Cambridge Film Handbook series (which has some interesting essays before decaying into theoretical density) Hitchcock/Truffaut by Francois Truffaut, and James Sanders’ Celluloid Skyline. Photo of Grace Kelly and Prince Rainier of Monaco from an article on their wedding in a French bridal magazine)