In the silent era, the American West was still unknown territory. New Mexico had only been a state for 17 years when Paramount sent a crew to a dramatic mesa outside Albuquerque to film Redskin. The scenario and story were by Elizabeth Pickett, who clearly had a sophisticated understanding of native peoples for her time. This film deals with issues that still have contemporary resonance. Jim Chee, the hero of Tony Hillerman’s Navajo detective novels, grapples with similar tradition vs. modernity issues as Redskin‘s hero, Wing Foot. The Pueblo tribe had allowed Pickett to make some documentary films in 1925, and Redskin pays careful attention to authentic detail. The breathtaking 2-color Technicolor cinematography evokes the dramatic landscape of Ansel Adams’ photographs, with locations at Acoma Pueblo, White Sands and Gallup, New Mexico, and Canyon de Chelly, Arizona.

Acoma Pueblo (where Corn Blossom lives in Redskin) contains the oldest continuously inhabited homes in the US. Native Americans have lived here since 1150 AD. The Pueblo people settled the top of this mesa, 367 feet above the valley, at 7000 ft above sea level to escape marauding bands of Navajo and Apache (a conflict echoed in the plot). In 1929, the only way to the top was a series of hand holds carved out of the rock, and the movie company asked permission to cut a dirt road to the top to transport their equipment. This is still the only road, unpaved until 1993. 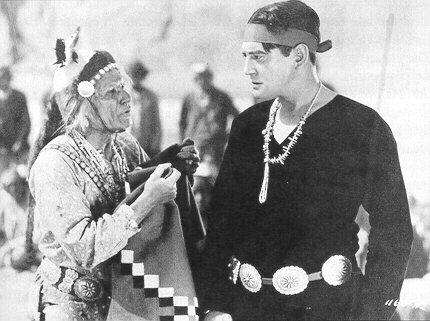 Richard Dix plays a Navajo abducted to a government boarding school as a child, but his partial assimilation into white society leaves him neither Indian or white, just “Redskin”. The abuses of these schools, where children were beaten for speaking their own language and forced to deny their traditions still provoke anger among their former students. Dix was a matinee idol of the 1920s whose square-jawed allure was showcased most notably as the noble brother whose virtues contast with the sins of Rod La Roque in C. B. De Mille’s silent The Ten Commandments. He has a wonderful intensity in Redskin, a part far different from the goody-goody De Mille had him play. Dix didn’t care much for Hollywood, and was happy to spend part of the 1920s making movies at the Paramount studios in Astoria, New York, now the site of the American Museum of the Moving Image. Dix had already starred in The Vanishing American (1925) a more melodramatic and racist view of Native American life. In 1931, he starred in Cimarron, which won a Best Picture Oscar and was almost the last of the outdoor epics until John Ford made Stagecoach almost a decade later. Only 13 or his 45 silent features survive. 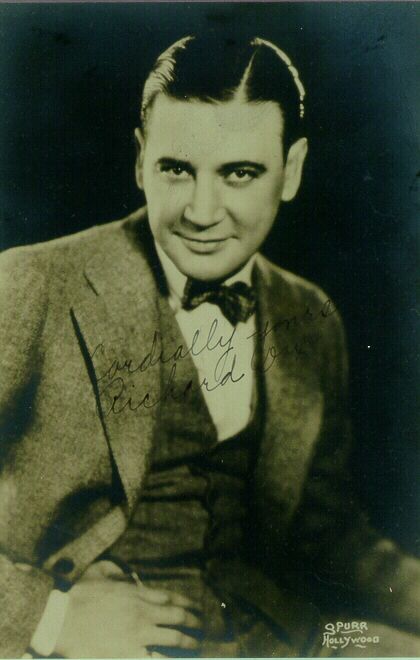 Redskin was an honest effort, ahead of its time, to present the complex web of prejudices between and among Indians and non-Indians. The film was photographed partially in a “ravishing” early Technicolor process; but only the scenes of Native American life, for the Indians are the heroes. Off the reservation, life was in black and white. The striking combination of color and monochrome footage resulted from a financial necessity, not an aesthetic decision. Paramount decided the film was costing too much money, and director Schertzinger was ordered to stop filming in color. He turned a potential disaster into an artistic statement. The original print was also filmed partly in Magnascope, an early 70mm wide screen process. This exhibition print was preserved from the original camera negative in the American Film Institute/Paramount Collection at the Library of Congress. 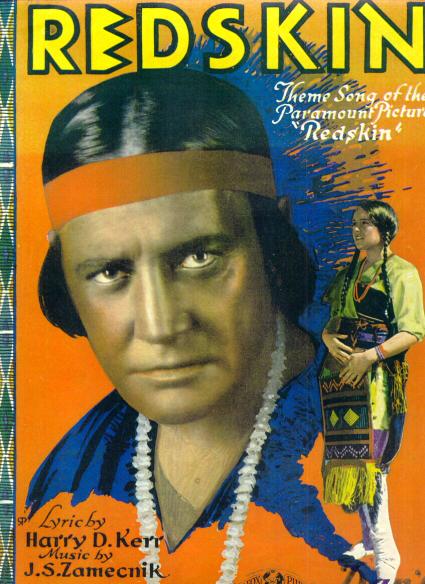 Lyrics of the theme song to Redskin:

(1) Night falls on the lone hills, With the campfires lighting the blue; Wild birds cease their calling, and silent hours bring you;

(2)Dawn steals thru’ the valley as the lone stars fade and depart; Day brings only mem’ries of the dreams that fill my heart;

(Chorus): Redskin, Redskin, boy of my dreams, take me back to silvery streams–Where thru’ the wild wood, in childhood we wandered–Songbirds winging and singing to you and me love’s melody, Redskin, Redskin, let us return–Where bright twilight Welcome fires burn–with happy hearts we’ll go roaming, I’ll whisper in the gloaming, I love you, Redskin, I love you.

David Drazin, who accompanied the NC Art Museum’s screening of Redskin (and provided the photocopy of the sheet music) describes composer J. S. Zamecnik as “the Paramount hack” who provided sentimental themes for most of the Paramount films of the late silent era, including Wings and The Wedding March. Lyricist Kerr clearly knew nothing about the New Mexico setting, a state notably lacking “silvery streams” and “wild wood,” especially on the barren Acoma Mesa.

Shown with: Bliss (1917) Harold Lloyd and Bebe Daniels. (7 min.) Bliss is one of the earliest of Lloyd’s shorts with the peppy “glasses character” he created after abandoning his Chaplin imitation, Lonesome Luke. This incomplete print was made from the only surviving copy, which was found in 1978 after being buried for half a century in Dawson City, Alaska.

In 1978, Dawson City was being rebuilt as a tourist destination recreating its former self, a boomtown gripped by gold fever at the turn of the last century. Excavating behind a former gambling den, Diamond Tooth Gertie’s, workmen struck archival gold, over 500 reels of 35mm nitrate film from 1903-1929.

The Dawson Amateur Athletic Association started adding films to their regular theater programs by 1903. But, Dawson City was the end of the exhibition line and shipping was expensive. The studios didn’t want the films back anyway, in the days before revivals, tv and video. So, the films were shelved in de facto cold storage in the basement of the library. In 1929, an open air swimming pool that was flooded for winter skating was going to be filled in permanently. Presumably, the skating season was longer than the swimming season. All the films were used as fill, dumped in, covered with dirt and boarded over.

The 510 reels discovered by the construction crew were in different states of decomposition, and all were damp. The National Film Archive of Canada rescued them, salvaged what they could, which came to about 425 reels, and began transferring the survivors to safety stock. 190 reels of US productions were transferred to the Library of Congress for conservation, including this only surviving copy of Bliss. With so many silent films lost, each reel is an invaluable piece of the puzzle that is film history.

Why can the Library of Congress say that 90% of all films made before 1929 are gone? Because the studios sent films to the Library, with accompanying print materials, like scripts, to copyright them. The reels were then returned to the studios for lack of storage space at LOC ( and since they did not begin collecting films until later) but the print material was retained. When the theatrical runs were over, and as far as the studio was concerned profit-making potential, prints were junked, sometimes to salvage the pitiful amount of silver in the film emulsion. Many lost films once sat in the Library of Congress, returned to the legal owners who considered them valueless.

And, as far as the studios are concerned, if you think things have changed, think again. Over 99% of new film prints are still junked, not because they are valueless, but just the opposite. Now, studios terrified of piracy make sure that few film prints survive theatrical runs. Museums like the NCMA looking for prints to show in a repertory film program often come up empty handed. Locating a decent print for a film only 20-30 years old becomes a scavenger hunt. Film history does not generate multi-million dollar grosses. A new 35mm print of a classic title not in need of conservation costs around $2-3000.00, probably the price of a coffee break on the set of the next Austin Powers movie. Which expense do you think the studios consider a good investment?

“In the early 1970s the National Film Theater in London asked Langlois for a loan of the Cinematheque’s print Tod Browning’s 1927 feature The Unknown. Langlois agreed. Months passed, and then suddenly, the print turned up in London. After thanking Langlois the director of the NFT expressed surprise at the length of time it had taken to fill his request. Langlois reply was, “Ah, but you see, we have so many cans of film marked “Unknown” at the Cinematheque.”– Glenn Myrent and Georges P, Langlois, Henri Langlois, First Citizen of Cinema

(The story of the Yukon film find is from the July-August, 1979 American Film, “There’s Film in Them Thar Hills!” by Sam Kula. Autographed photo of Richard Dix from the collection of Miss Jane Hendricks. Photo from Redskin from one of the greatest film books ever written, The War, the West and the Wilderness by Kevin Brownlow. I hope Mr. Brownlow (my hero) doesn’t mind my borrowing the photo, since I was unable to purchase a still from Redskin from any of my sources. Glenn Taranto’s splendid Richard Dix website has lots of great photos and an excellent biography. But, sadly this link no longer works. The David Drazin website has quotes, a list of scores and soundclips.)