Just One More Heist. Blacklisted American director Dassin exiled himself to France in the 1950s and made this seamy caper film, famous for a meticulous 30-minute, heart-stopping burglary detailed without music or dialogue. “Out of the worst crime novel I have ever read, Jules Dassin has made the best crime film I have ever seen.” –Francois Truffaut.

In the 1940s, Jules Dassin had made several neo-realist crime films, including The Naked City, trailblazing post-war location photography in New York City. “It was difficult at the time in the studio system to get too far from home. They’d say, you want a street, we’ll build you one,” Dassin said. He was denounced in front of the House on Un-American Activities Committee by director Edward Dmytryk, one of the Hollywood Ten. Dymtryk had gone to jail for a year, and on release named names in order to remove himself from the blacklist. Dassin clearly understood what it was to be a victim of fate, and in his films makes informing on a comrade the greatest sin. In 1950, his camera roamed the shadowy London streets for Night and the City, starring a weaselly Richard Widmark as a crooked wrestling promoter. His next chance to direct again was five years later, and he identified strongly with his hero. “I knew what it must have felt like for Tony, that whole span of not existing, not functioning. In the beginning, Tony tells the guys, I can’t do it. I’m not up to it. And, I felt that, too.” Dassin said in a recent interview.

Even as an expatriate director in Paris, American pressure still caused potential jobs to unravel. Dassin had been unemployable by French production companies because of blacklist-inspired threats that precluded profitable American distribution.”I wrote it, directed it and acted in it, and my fee was $8000. And I was glad to have it.” He got the job because the film’s producer had bought a potboiler that he realized was unfilmable because all the protagonists were Arabs, during the emotional time of France’s conflict with Algeria. Dassin was told, “‘If we hire you, you can make all the bad guys Americans.’ I said, ‘Why can’t we make them French?’ He had never considered it.” The book was racist, no doubt part of the reason for the Truffaut quote, “Out of the worst crime novel I have ever read…” But there was one little chapter that intrigued Dassin about a robbery, and he wrote the script in 10 days. He remembered walking through Paris with a secretary and dictating the script, saying, “We’ll do this scene here and that scene there.” The city streets, during glum rainy days and sharply shadowed nights are almost a character themselves in the film.

Jean Servais, who played Tony, was a weary has-been child actor, and the director was forced to play Cesar himself (delightfully) when an accelerated production schedule clashed with the actor’s contract negotiations. His team behind the camera included many legends of French filmmaking including composer Georges Auric. He was shocked when told that Dassin wanted no music for the holdup sequence, but wrote some anyway, certain that the director would change his mind. Dassin screened the robbery with and without the score and asked Auric what he thought. He said, “Take out the music.” 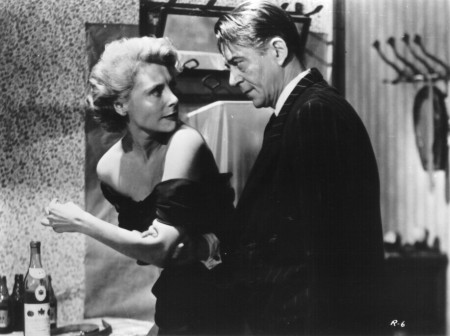 In his rave review, film critic Francois Truffaut said, “Dassin remains faithful to his style of combining the documentary approach with lyricism. For the past week, the only thing being talked about in Paris was the silent holdup, splendidly sound tracked, in which objects, movements and glances create an extraordinary ballet.” Rififi became an international hit and Dassin won the Best Director Prize at Cannes in 1955. The only American who was brave enough to stand with him at Cannes was Gene Kelly, an actor with liberal politics (and a wife who was quite active in anti-fascist causes) who was saved from the blacklist by dint of his fame and his value to MGM.

Rififi is the prototype for all the crime films where a group of charismatic criminals are followed through a complicated and detailed robbery. The Clooney-Pitt version of Ocean’s Eleven is a recent example of this genre, although Rififi‘s robbery is intriguingly low-tech in comparison. Mission Impossible on large and small screen wouldn’t exist without Rififi, and even Wallace and Gromit in The Wrong Trousers show the influence of this film. Dassin even copied himself, in the considerably more glamorous Topkapi, starring his second wife, Melina Mercouri. Topkapi was photographed in stunning color on location in Istanbul during the height of the “caper film” era. Rififi played in the original French only in the big metro areas in the US, and was dubbed for the hinterlands. And, it ran into censorship problems, too, not just because of the sex and violence still prohibited by the Production Code in this country, but because of its being a primer for crime. It had virtually disappeared until this new print was restored by Rialto Pictures, owned by Bruce Goldstein of Film Forum in NYC, perhaps the most exciting revival house in the country. Dassin himself collaborated in retranslating the rich Parsisian slang of the dialogue. Michael Sragow says, “Rififi is just about flawless: a genre movie brought off so keenly that it defines the genre’s strengths and limits.”

“For the French, Rififi had Hollywood pizzazz; for Americans, it had continental sophistication, for both, it seemed to possess an authoritative naturalism.” (J. Hoberman). It’s no musty museum piece, but a driving, compelling piece of work, redolent of the air of human frailty and fatalistic doom” (Kenneth Turan)

Sources: Michael Sragow and Kenneth Turan in the NYTimes, J. Hoberman and Leslie Camhi in the Village Voice, Paul Arthur in Cineaste, Francois Truffaut, The Films in My Life. (Photo from Jerry Ohlinger’s Movie Materials Store).