Hope and Crosby tangle with a Bedouin chieftan, a conniving princess and one very cranky camel in the surreal and self-referential Road to Morocco, the best of the “Road” series. “The hilarious, non-stop gag engine, song-and-dance routines and ad-libbed patter between the two men set the comedy standard for decades, from Jerry Lewis to the Farrelly brothers.” (Halter)

Bob Hope and Bing Crosby first met when they shared the stage in Ballyhoo of 1932. Their good-natured banter seem to flow naturally, and they enjoyed comradely insults of “ski-nose” and “butter-belly” which they’d perpetuate through their long friendship. Crosby said, “It was a thing we fell into. It grew out of the fact that when we appeared on each other’s radio programs and in the Road pictures, it seemed easier for our writers to write abusive dialogue than any other kind.” (Quirk). They were frequent guests on one another’s shows, and their chat echoed the popular feuds of other radio stars, like Jack Benny and Fred Allen, or Edgar Bergen (as Charlie McCarthy) and W.C. Fields.

Once Hope had a hit in The Cat and the Canary, Paramount was looking to capitalize on his fame and box office punch. They had a script on the shelf called The Road to Mandalay, a good natured farce about a pair of wandering entertainers in the tropics. Fred McMurray and Jack Oakie were going to star, or maybe George Burns and Gracie Allen. Retitled The Road to Singapore, and retooled for the personalities of Bob and Bing, Crosby said, “I was intrigued with the idea of working with Bob and Dottie because it seemed to me it would be a winning combination. A foreign land, natives, music. Dottie in a sarong, Bob being a clown and me singing the ballads.” (Faith).

Hope and Crosby enjoyed themselves ad libbing so much, that Dorothy Lamour gave up memorizing her lines, and decided that getting a good’s night sleep so she could keep up with the improvised wordplay was the best preparation possible. Just because the dialogue was not in the script, didn’t mean that someone didn’t write it, since Hope and Crosby both brought in their radio gag writers to punch up the lines. The director conceded, “You know, I really shouldn’t take any money for this job. All I do is say ‘Stop’ and ‘Go.’” They genuinely seemed to enjoy each other’s company and their friendship, on stage and on the golf course, would continue the rest of their lives. The Road to Singapore, as the film was eventually titled was the first of the 7 Road pictures they would make together. The huge success of the “Road” films was instrumental to Bob Hope’s status from 1941-1953 as one of the top 10 box office draws (except for one year). The second “Road” film (…to Zanzibar) was yet another script plucked off a dusty shelf, but the third one, The Road to Morocco, was original material, tailored to Hope and Crosby.

This is considered the best of the “Road” pictures. The formula for success includes topical humor similar to that incorporated into Hope’s radio show. The director of this film, David Butler, was well-suited to the comic task, having grown up at Mack Sennett’s slapstick comedy studio in the silent era, and he knew both how to structure a comic scene and when to let the stars wing-it. Rehearsals lost some of the comic spontaneity, so Butler said, “I’d always let the camera run, and we got some of our funniest stuff after the scene was over. I’d even let the camera roll until they got off the set, or walked out, or whatever happened.” This paid off best in the scene where a cranky camel spits in Bob’s eye, and Bing’s laughter shows his surprise. But, as a former stuntman, Butler also volunteered the rather sedentary Hope and Crosby for a thrill or two they would have preferred to avoid, as when a stampede of horses got out of hand, and the stars narrowly escaped being trampled.

Neil Sinyard wrotes, “In Hope’s persona of the sexual braggart, the devout coward, the man who uses his wit to hide his insecurity, one can see many anticipations of the early Woody Allen.” In fact, Allen has said that his interest in comedy was created when he saw Road to Morocco and that his idea of a perfect weekend would be half a dozen Bob Hope films. Although one of the many running gags is how the girls are all attracted to Bing, the crooner, in real life it was in fact Bob Hope who was the wolf, a veteran of countless extra-marital dalliances. 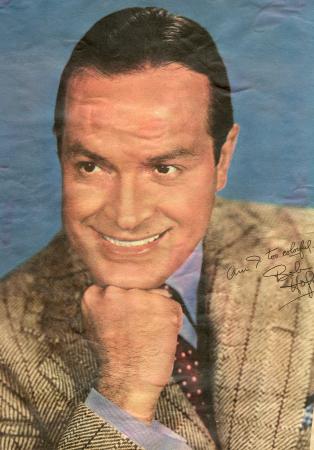 Bing Crosby had been in films since his appearance in King of Jazz, as one of the Rhythm Boys, with Paul Whitman and his Orchestra. Crosby made musical comedy shorts and features throughout the 1930s. In 1942 he had just starred in Holiday Inn, along with Fred Astaire, and introduced the Oscar winning perennial “White Christmas.” Two years later he would win an Academy Award for playing a priest in Going My Way. His offhand suavity while crooning a series of classics by the greatest of American songwriters made him one of America’s most beloved entertainers, and a very rich one, worth hundreds of millions at his death, his wealth second perhaps only to Bob Hope’s. 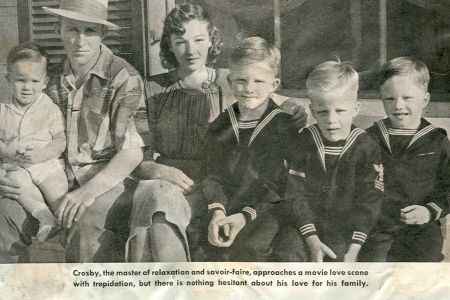 Dorothy Lamour was a former Miss New Orleans who was working as a nightclub singer when Bob Hope first met her in New York in the early 1930s. She’d been in his first film, The Big Broadcast of 1938, and would of course co-star with him many times. Her movie fame rested on a hokey series of South Sea Island pictures, starting with The Jungle Princess, where she played a native beauty swathed in Edith Head’s sarongs. 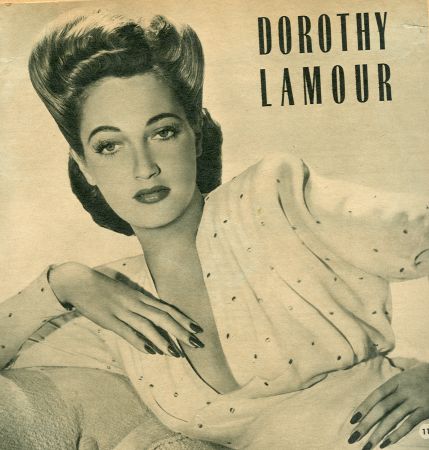 Needless to say, this film is not politically correct by today’s standards. There were a whole cycle of “Arabian Nights” films in the 40s, and it was not unusual for someone like Maureen O’Hara to play a Bedouin princess. Anthony Quinn was recruited to play evil Arabian sheiks more than once. While he always complained bitterly about his typecasting as a variety of exotic villains early in his career, in fact, he brought a lot of wicked fire to these roles, and he is always a pleasure to watch.

The costumes, as for all Paramount “A” films, were designed by Edith Head, who at this point in her career worked on between 40 and 50 films a year. She enjoyed working on the Road films, and wrote in her autobiography, “I didn’t have to worry about authenticity. If somebody wrote and said, ‘Edith, in Morocco they don’t wear headdresses like that,’ I didn’t give a damn. If Bob Hope wanted to wear it because it was funny, he wore it.” (Head). Hope loved dressing up and Crosby hated it. Lamour, who had started in sarongs (she was sewn into them, so they wouldn’t untie) loved the exotic glamour of films like Road to Morocco. “Bob has a special place in my heart for what he did for my costumes in the Road pictures. It was his enthusiasm that really inspired everyone else to get into the spirit of the Roads. There were chaotic plots and gags and lavish sets and great music, but Bob Hope pulled it all together.” (Head).

The film was promoted by tacking cards to drinking fountains reading, “Thirsty for entertainment? See what happens when Bob Hope chases Bing Crosby and Dorothy Lamour to a desert oasis on the Road to Morocco.” In fact, the best promotion for the film were the stars radio programs, many of which, by this time, Hope was doing from Army training bases across the country. My parents had an album of 78 records of a number of these broadcasts, which my brother played repeatedly until he had memorized Hope’s routines. The seven Road movies were sequels of sorts, but spread over 22 years. They even occasionally introduced tunes that became standards, “Moonlight Becomes You” in this film is an excellent example. Time Magazine said, “The Road shows were rummage sales of stuff out of vaudeville, burlesque—marvelously shoddy masterpieces of farce and fantasy, stitched together with clichés and ad-libs.” (Mielke). The NC Museum of Art audience LOVED this film; I’ve never heard louder laughter for anything in five years of programming films at the museum.

Before Bob Hope became Bob Hope, he made a series of 2-reel comedy shorts at the Warner Brothers Studio in Brooklyn. Three hardworking days resulted in 20 minutes of finished film. Movie studios had branches in NYC to take advantage of stage actors, who could squeeze in working days making a movie while still treading the boards at night. The Library of Congress has provided one for this evening, “Calling All Tars.”