A widow and her children are abducted and sold into slavery in 11th century Japan. This historical epic of formal beauty and raw emotional power pleads for compassion in midst of brutality. “Shansho the Baliff is one of those films for which cinema exists—just as it perhaps exists for the sake of its last scene.” (Gilbert Adair quoted in Le Fanu)

The story of Sansho the Baliff is a thousand years old, a folk tale that has been retold countless times. In medieval times, it was told by mendicant priests to village peasants, carrying a Buddhist message meant to offer reassurance to listeners. The story is required reading for schoolchildren, still popular today. But it likely would not have been made into a film, had it not been famous as a story written in modern prose in 1915 by Mori Ogai. Ogai’s version stressed the magical, fairy tale aspects of the story, deemphasizing the tragedy. It was written at a time when a newly liberalized Japan was moving away from tradition, but before the onset of the militarism which would precede involvement in WW II. Unlike the Ogai version, Mizoguchi “makes no room for epiphanous dreams, magical talismans, disguises, repeated numbers, parallel experiences, helpful strangers or a happy ending” (Cavanaugh). Mizoguchi’s version of the story focused instead on the realistic aspects of this familiar family melodrama with political overtones. Made less than a decade after the end of WWII, it does not gloss over issues of political corruption, oppression and loss. Sansho had to wait until the censors of the Allied Occupation permitted the telling of the historical tale, afraid of invoking the customs and traditions they feared caused Imperial Japan’s deadly militarism. The one sanctioned theme, well on display here, was “how can you change Japan into a democratic society?”

Two children are torn away from their mother’s arms and forced into servitude in the muddy sty ruled by the brutal Sansho, a favorite of the ruling government because of his ability to extract taxes and pay tribute. The Hansel and Gretel (as Zushio and Anu) aspects of the story endure, but all the versions of the story are about the power of Anu, whose clear-sighted morality helps orient her brother when he strays from a path of virtue. According to Confucian values, men have unquestioned authority, and a woman’s role is self-sacrifice for fathers, husbands and brothers. Here, at a moment in Japanese history when the first seeds of feminism began to sprout, in part because of a Japanese production of Ibsen’s A Doll’s House, Anu is the one whose choices propel the story to its conclusion.

Kenji Mizoguchi was born in Tokyo in 1898. His family suffered financial reversals, and poverty forced his family to let his older sister “be adopted by” a geisha house, in other words, sold into prostitution. He only had six years of formal schooling. After his sister became the mistress of a wealthy aristocrat, she sent her brother to further his education as an artist. But he loved the theater as well, and in 1920 joined a film studio as an assistant director, directing his first film three years later. No doubt his training in the visual arts contributed to the magnificent compositions that are a highlight of his cinematic style. And he was always sympathetic in his films to the suffering women endure as they sacrifice their own happiness for selfish men. Mizoguchi frequented dance bars and brothels. He was attacked and stabbed by a jealous girlfriend in 1925, a scandalous incident which resulted in temporary suspension from his studio contract. He married a bar hostess the following year, who eventually succumbed to mental illness and was institutionalized. “What manner of guilt or expiation might have lain beneath his intensely sympathetic direction of actresses we can only guess” (Lane). There is no question that the sacrifice of a sister for a brother is a dominant theme in Sansho.

Kinuyo Tanaka, who plays the mother in Sansho, was the director’s muse. She acted in many films for him, starting in 1940, and while they were never lovers, she was, according to people who knew them, the great love of his life. “He loved, through me, the women I played,” she said. (Le Fanu). She stars in a third of his existing films. 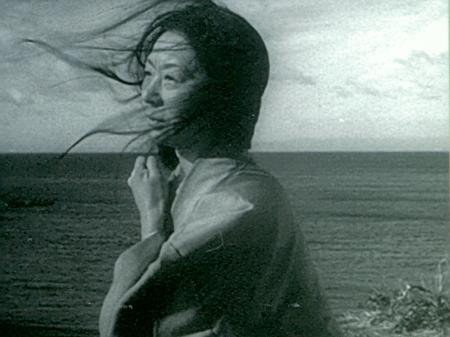 Kyoko Kagawara, who played the grown Anu, remembered that Mizoguchi gave them tremendous freedom of interpretation. “He felt we must act through our bodies and our hearts.” In practicality, this meant he would wait through 30 takes or more, as he repeated over and over, “Are you reflecting?” trying to get the actors to feel their parts deeply. Although she found him somewhat intimidating, she determined, “He taught me my most important lessons as an actress.” The practical result of this was his characteristic long shots, because he felt the longer the shot, the better the actor could sustain their emotions. This often involved complicated compositions, usually including more than one actor, and a mobile camera, frequently using a crane. In traditional Japanese performing arts, the most beautiful moment is coming to stillness after a movement or emotion, and you can see this in the way he photographs his actors.

Takuzo Tanaka was the first assistant director. Among his many duties was research to make the film as exact to the 11th century as possible. If a vase authentic to the period could not be found, it took a certain amount of persuasion to get Mizoguchi to accept a replica. The studio found some of his demands unreasonable, but because he was such a successful director, Tanaka could say, “the old man just isn’t happy with it,” and the studio would consent to his demands. In other respects, his freedom was curtailed, though. He was attracted to the story because of the character of the merciless Baliff, but the studio wanted the story to be focused on the two children. “Those studio bastards are forcing me to make it this way,” he fumed, and he was unhappy that the film was not what he intended. (Criterion)

Mizoguchi as a director was somewhat of a tyrant, himself. He commissioned numerous script revisions, and exhausting rehearsals, never praising his overworked cast and crew. He put leading actress Tanaka Kinuyo on a starvation diet so she would look weak and miserable in the final scenes (perhaps taking a page from the book of Lillian Gish in La Boheme).

Mizoguchi allowed the composer, Hayasaka Fumio complete freedom to decide where, and what kind of music would be in the film, and the result is a haunting and memorable score, with the sound of the mother’s wailing voice layered with samsen and birdsong.

Sansho won the Silver Lion (2nd place) at the Venice Film Festival 1954 and was released in Europe in 1960. Cahiers du Cinema rated it the #1 film of the year, followed by L’Avventura, A Bout du Souffle and Tirez sur la Pianiste. Although Japanese films came to Western attention for the first time in the early 1950s, with Rashomon, Ugetsu, and other works of Kurosawa, Ozu, Mizoguchi and Narune, Japan had always been a major film producing country, with a long tradition of cinematic excellence. He made 86 films in his career, of which only 32 are extant.

Sansho the Baliff “seems to be seen as the deepest and finest of all Mizoguchi’s works—his King Lear, so to speak, the summation and quintessence of his artistry. Experiencing it in the right conditions, the viewer can begin to feel that this is one of the very few works in film, whose emotional range and moral spendour can truly stand comparison with Shakespeare.” (Le Fanu). “(I emerged) from the cinema a broken man but calm in my conviction I had never seen anything better.” (Lane in The New Yorker). 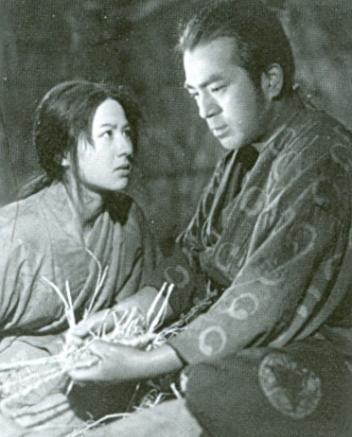