“He was born with a gift of laughter, and a sense that the world was mad.”

So begins Scaramouche. Do teenage girls read Rafael Sabatini anymore? Scarmouche, Captain Blood, The Sea Hawk? I came to Sabatini through Errol Flynn as Captain Blood, but I tore through many of Sabatini’s other 38 swashbuckling novels, (the word refers to the clash of sword fighting) which occupy that thin ledge between serious and trashy fiction. Sabatini’s honorable, outcast (through no fault of their own) heroes were the romantic creations of the “modern Dumas” who, unlike Dumas, wrote in an era when he realized his books might be adapted for the screen.

Adventure stories go back as far as The Illiad and The Odyssey, and continue through the stories of King Arthur and the Round Table. The 19th century brought a vigorous style epitomized by writers like Sir Walter Scott, Jules Verne, Robert Louis Stevenson, Sir Arthur Conan Doyle and Rudyard Kipling. Their tales became staples of the stage, and then, the movies.

Italian-born Sabatini wrote in his mother’s native English because he thought the best adventure stories were written in that language. He was the son, possibly illegitimate, of an opera singing couple. These two themes, of doubtful parentage and an itinerant theatrical life, are themes of Scaramouche (1921) his first great success. Captain Blood followed in 1922 (and was filmed for the first time in 1924). After the triumph of the movie Scaramouche, earlier novels were reprinted, including The Sea Hawk (1915) filmed in 1924 with Milton Sills and Bardelys the Magnificent (1906) starring John Gilbert and Eleanor Boardman, directed by King Vidor in 1926. The latter film is lost, except for a brief sequence Vidor included in his Hollywood satire, Show People. Sabatini strove for historical accuracy, “To produce historical romance of any value, it is necessary first to engage in researches so exhaustive as to qualify one to write a history of the epoch in which the romance is set.” He did write several non-fiction books about subjects he romanticized in fiction. (**Bardelys the Magnificent was rediscovered in 2006!) 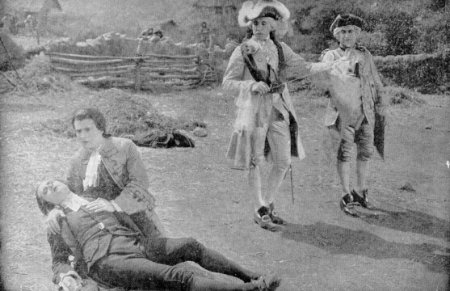 “Phillipe! Oh God in Heaven, don’t you hear me?”

Rex Ingram was one of the few silent era directors who exerted complete artistic control over his films, and in the twenties was considered an equal of Griffith and von Stroheim. He worked with a loyal company of cast and crew, including John F. Seitz, his gifted cinematographer. Ingram pays meticulous attention to detail and artfully casts even the smallest parts. Seitz’s painterly lighting and photographic effects were innovative and admired. His distinguished career continued until 1960, and he photographed many of Preston Sturges and Billy Wilder’s important films.

Ingram (and screenwriter June Mathis) made a star of Rudolph Valentino in The Four Horsemen of the Apocalypse (1921) but the star and director clashed during their next film together, The Conquering Power. Valentino decamped to another studio, and Mathis followed him. Legend has it that Ingram declared he could make a star of any old extra, and chose Ramon Samaniego. Later in his life, Novarro would dispute the serendipitous story of his discovery. If Ingram did indeed threaten to make an unknown the equal of Valentino, he selected his successor with care, since Novarro had been featured in several films, and had a letter of introduction to the director. Metro decided Ramon’s Mexican surname was too difficult to pronounce and pulled “Novarro” out of thin air. He remains a familiar face from the silent era because he was shortly to star in the title role of one of the most frequently revived silent films, Ben-Hur. 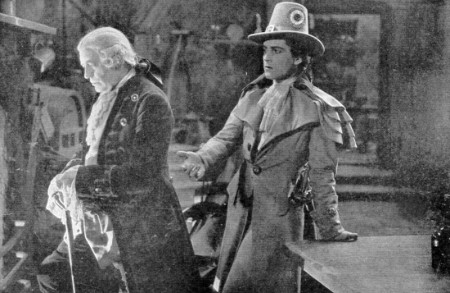 Novarro’s first splashy part was Rupert of Hentzau in Ingram’s The Prisoner of Zenda. The hero, Rudolph Rassendyll, was played by Broadway matinee idol Lewis Stone. Alice Terry’s Princess Flavia was exquisite, but passive, like most of her heroines. Stone lacked fire as a leading man, so Novarro’s leering villain stole the show (if not the kingdom of Ruritania). Ingram was Novarro’s mentor, and the films they made together paved his path to stardom. He and Alice Terry became Novarro’s life long friends. Novarro’s publicity ghettoized him as a post-Valentino Latin Lover. He may have lacked Valentino’s memorable streak of passionate cruelty, but he was a more sensitive actor, and romantic in an understated way. Novarro was gay, although he cooperated with studio publicists’ necessary fantasies of “a sweetheart in Mexico” when required. He had a long career stretching through the early talkies (he had a pleasant singing voice, and introduced “The Pagan Love Song” on screen in 1930) to featured roles in 60s tv shows like The Wild, Wild West. His sordid murder in 1968 resulted in an unpleasant posthumous fame. 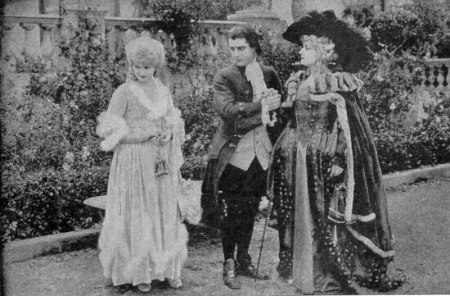 (This still illustrates that while Novarro’s costumes and some of the women’s were correctly in period, Miss Terry’s tend to conform to 1920s standards of beauty rather than the 1790s.)

Ingram’s great films all starred his delicately beautiful wife, Alice Terry. Terry is lovely, but her emotions are contained; she is a specialist of the tremblingly suppressed gasp and sigh, her eyes brimful of unshed tears. In an interview with George C. Pratt from George Eastman House in 1973, she was rather dismissive of her career. She said of her first starring role (in Ingram’s The Four Horsemen of the Apocalypse) “Oh, I was just so glad when that picture was over! It was so difficult for me, because it was my first big picture, and it all seemed to be so important. And, you know, I thought, I’m going to ruin the whole thing! I mean, I certainly couldn’t do the acting that some other people did. So then, I was always ‘adequate.’ Every time I read a review, I was ‘adequate.'” 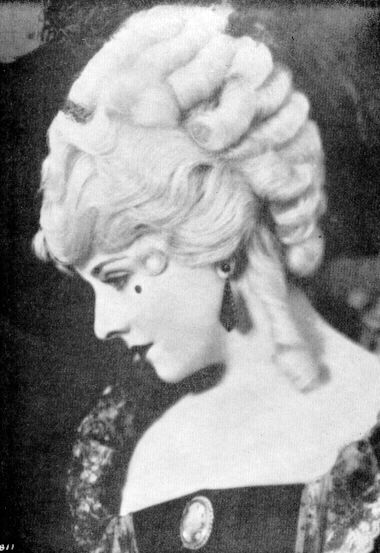 Alice Terry as she appears in Scaramouche.

Much of The Prisoner of Zenda’s cast returned for Scaramouche, set during the turbulence of the French Revolution. When a young law student sees his friend murdered by a foppishly cruel aristocrat for his “dangerous gift of eloquence” the personal becomes political, and he is soon on the run from authorities. Novarro cuts a dashing figure, as he joins a nomadic commedia dell’arte troupe playing the clown Scaramouche, and later becomes a fencing master. Lewis Stone seems more inspired by villainy than he had been as a hero, casting his roving eye at a succession of pert beauties and coldly slaying rebellious populists. Terry’s Aline wins audience sympathy slowly, as her flirtation with Stone’s Marquis makes her seem mercenary and unworthy of the hero’s high regard.

Scaramouche was a big production, budgeted at over a million dollars, with 30 principals, and 10,000 extras. “An army of workmen built a whole French village which covered 60 acres and which was faithfully reproduced to cobble-paved streets and shop windows filled with actual wares. Hundreds of thousand of yards of muslins, satins, brocades and velvets were required in the making of the gorgeous costumes worn by the actors and actressesfifty five persons spent four months making the costumes.” The surging mob scenes in which Paris is gripped by The Terror are genuinely terrifying. 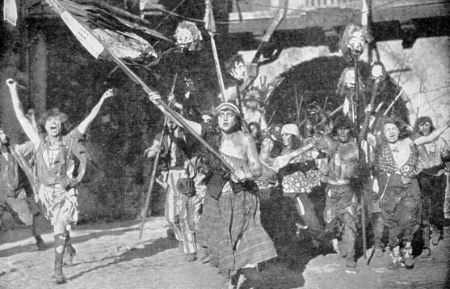 The insensate mob in action.

Ingram was both producer and director, collaborating closely with the scenario writer and cinematographer as well as the editor and composer of the score.. The imprint on each title card reads “Rex Ingram Metro” and during the seven months of filming, no one from the front office dared to interfere, appreciating his ability to create lavish, profitable spectacles. 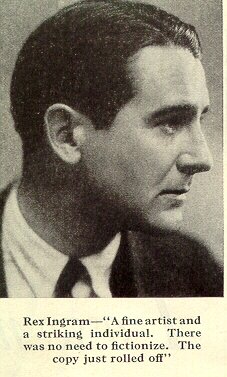 DeWitt Bodeen, who profiled the careers of Novarro, Rex Ingram and Alice Terry for Films in Review (Nov. 1967, Feb. and March 1975) wrote of his own youthful experience seeing Scaramouche: “More than ever, the music that accompanied Scaramouche was an essential part of its public presentation–not just ‘La Marseillaise’, which shadowed the mob scenes, dominating the film’s ending, but in scenes where there was a secret menace underlying a Mozart theme that provided a warning of imminent treachery. I know when I saw the roadshow of Scaramouche at the White Theatre in Fresno, California, an awesome suspense gripped the audience when those deceptively sweet Mozartian notes sounded, while the sheer ecstasy of ‘La Marseillaise’, as played by a full symphony orchestra, when the liberty-crazed mob, led by Rose Dione, swept through the streets of Paris in a murderous carmagnole, made the walls and ceilings of the auditorium quiver with sound. I have often wished that those who are too young to have seen a film exhibited precisely as the big ones were in the days of the silents could see a picture like Scaramouche as it was shown to the accompaniment of a full orchestra; they might then realize how very little the invention of sound actually brought to the film medium for the silent movies had a very special eloquence.” I’m happy to say that in the 25 years since those words were written, it has become easier to experience the blissful union of silent movies and live music.

Fittingly, Scaramouche‘s opening line is the epitaph on Sabatini’s tombstone.

(The entire text of Scaramouche is posted online at www.blackmask.com (Sadly, no longer.  This link is broken.)  A new print with a splendid orchestral score by Jeffrey Mark Silverman just premiered on TCM. Grapevine Video sells a print that is 24 minutes shorter, with a different score. Sabatini quote and the brief history of adventure novels from The Romance of Adventure by Brian Taves. Photo of Rex Ingram from the September, 1929 Photoplay magazine. All other photographs, captions and production quote from the “Photoplay Edition”–14th impression, March, 1923. Lettie E. Rogers received it as a Christmas gift in 1926. A couple of years ago, I gave a number of copies of Scaramouche as presents (to teenaged girls) including a couple of “Photoplay Editions” one of which had a different set of photos than this one. At the time, I couldn’t justify keeping both, but now, I’m a bit sorry!)