Tony Camonte, played by the electrifying Paul Muni, discovers a passion for underworld power, tommy guns and beautiful babes. Screenwriter Ben Hecht evoked the atmosphere of both the Italian Renaissance Borgia family’s maneuverings for power and the American success saga of The Great Gatsby in this gangster classic. “Scarface remains, as it was in 1932, the last word on the Chicago gangsterdom of the 1920s, the smartest, cleverest, punchiest portrayal of an individual mobster’s rise and fall” (Todd McCarthy).

Prohibition of alcohol began in the US in 1920 and lasted until 1933. Rather than create a moral nation, as those who instigated the Constitutional Amendment intended, the result was that average citizens who simply wanted a drink became law breakers. Criminals quickly organized to take advantage of a lucrative market in illegal whiskey, beer and wine. Americans were fascinated with these gangsters who thrived in the decade of the Roaring Twenties. In an age that worshipped the successful businessman and get-rich-quick schemes, criminals like Chicago’s Al Capone inverted this classic success story into a lucrative life of crime. Nicknamed “Scarface” for the two parallel lines scarring his face, this bootlegger, crime lord and psychotic murderer lived extravagantly, driving a custom-made, bullet-proof sedan. Capone was finally vanquished, not by a dramatic shoot out with the cops, but by a prison sentence for income tax evasion. Scarface contains the sensational reproduction of actual crimes ascribed to Capone, crimes which were well-known to the movie-going audience, including the St. Valentine’s Day Massacre. Capone was mythologized in newspapers, books and movies during his career, and by the time of his arrest in 1931 he was the most famous gangster in America, a title he still holds. After his incarceration, his personal power waned, but the criminal organization he created continued to thrive. 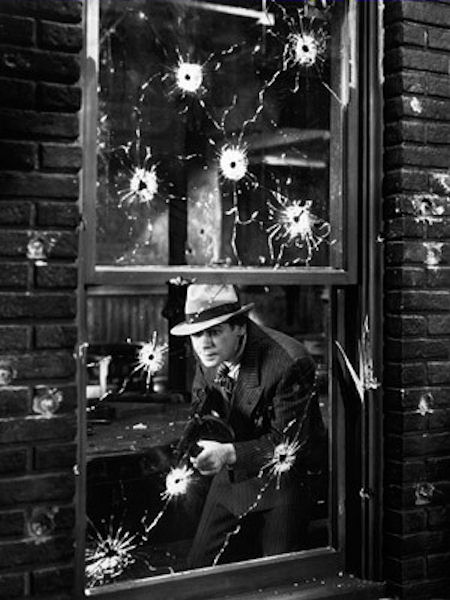 Scarface was one of a trio of prototype slam-bang gangster pictures. In the first of the three, Edward G. Robinson played another Capone-like figure in Little Caesar (1930) based on the novel by W.R. Burnett. The Public Enemy (1931) starred James Cagney as the nervy and brutal killer Tom Powers. Paul Muni played the most unhinged criminal of all in the last of these, Scarface. These films all benefited from the lax Pre-Code era when movie censorship was not strictly enforced, which lasted from the dawn of sound films in 1927 until mid-1934. There had been silent crime films, but the talkies brought the genre to life, unnerving those guardians of the public morals who fretted about undue media influence on impressionable youth. “Tommy guns ra-tat-tat, tires screech, windows crash, women scream, newsboys shout, crowds murmur, jazz blares, and the ambient noise of the streets assaults the ears or percolates just under the edge of consciousness. Above all, the patois of the city murmured a melodic leitmotif—laden with slang and cynicism, clipped dialogue spat out rapid-fire, mouthed by fast-talking hoods, and hard-bitten molls” (Doherty).

“Hollywood had made gangsters look glamorous, and they were grateful for it. When G-Men gunned down John Dillinger, aka Public Enemy No. 1, in the summer of 1934, he was coming out of a movie theater where he’d been watching Clark Gable in the gangster film, Manhattan Melodrama. There was, in the words of the Hollywood historians Christopher French and Linda Rosenkrantz, something of a ‘cultural exchange program between the studios and the underworld.’ Actors imitated gangsters who imitated them right back. Screenwriters incorporated street argot and made it snappier–and then it filtered back to the street, new and improved” (Talbot 378). 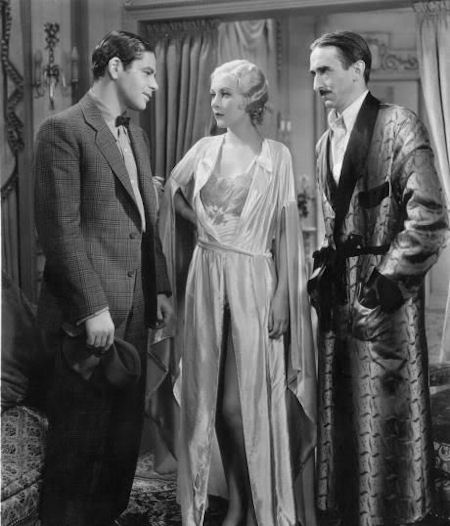 The censors insisted on the insertion of a scene in which outraged citizens demand that the federal government institute some kind of action against raging gun violence. The contemporary resonance of the impassioned speech referring to murdered children caught in the spray of Tommy gunfire was not lost on the NCMA audience. Perhaps it was no coincidence that in 1934 both the Production Code was enforced, banning the gratuitious use of on-screen violence, and Congress passed the National Firearms Act which banned private ownership of the gangsters’ beloved Thompson submachine gun. The bursts of bullets which tore up both the movie screen and the Depression maddened nation would temporarily be reduced.

Scarface was plagued by censorship problems before filming began, even in a time of weak oversight by the censors of the Hays Office. The original ending in which Camonte died in a hail of bullets, defiant to the end, was banned. A second ending, where the gangster turned coward took its place, and an even milder one was filmed (without the cooperation of any of the principals) where Camonte is executed by the state for his crimes. A subtitle, “The Shame of the Nation” was added, but no amount of moralizing at the end could replace the 90 minute glamorization of the criminal life that preceded it. 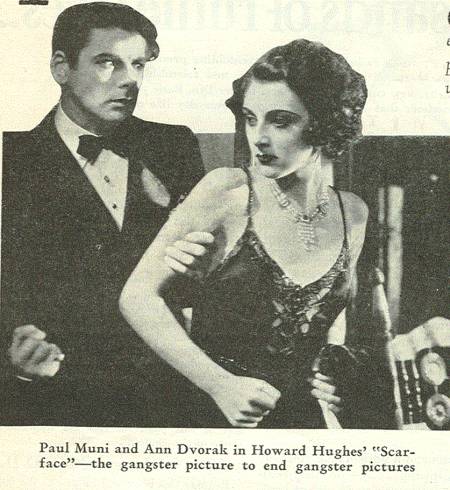 Howard Hawks was one of a generation of directors hailed as “auteurs” because they worked within the studio system, yet imposed a personal style on their films. Early film directors emerged from other professions (Hawks had been studying lazily to be an engineer) but found the nascent movie business captivating. Hawks’ career in silent films was relatively modest, but in the talkies he hit his stride. He agreed to direct a film for millionaire Howard Hughes, who wanted to be in the movie business and spent his fortune as he pleased. Hughes decided a gangster film would be a profitable venture, and told Hawks, “make it as realistic, as exciting and as grisly as possible.”

Ben Hecht, a hit playwright who was also a former Chicago newspaperman, had known Capone in Chicago. He spent two weeks, at $1000/day, polishing Scarface’s script, adding an atmosphere reminiscent of the amoral Borgia family’s ruthless quest for power in Renaissance Italy. (Cesare and Lucrezia Borgia, children of the notoriously libertine pope Alexander VI, masterminded murderous plots; Cesare was the model for Machiavelli’s The Prince.) Camonte’s incestuous desire for his sister, Cesca reflects Cesare and Lucrezia’s relationship. Hecht also contributed The Great Gatsby-like scene where Camonte admires the beautiful silk shirts that his ill gotten gains have provided, and likely recommended Paul Muni for the role of Tony Camonte.

Paul Muni had been a stage actor in the Yiddish theater since childhood, and did not perform in an English language play until he was 31. He’d made a couple of unsuccessful films in Hollywood in 1929 before returning to the NY stage. His huge success in Scarface and a subsequent Broadway hit, Counsellor-at-Law, secured him a Warner Brothers studio contract. His first Warners film was the hard hitting expose, I Am a Fugitive From a Chain Gang. Later in the 1930s he was in a series of dignified and successful biographical films, winning a Best Actor Oscar for the title role in The Story of Louis Pasteur.

George Raft had worked for a real gangster, Owney Madden, and his character in Scarface was based on Capone’s real-life bodyguard and best friend. Raft, a former prizefighter and ballroom dancer, was just getting his start in films. Hawks gave him the nickel-flipping gesture that would become his trademark partly to give him something to take his mind off his nervousness. You’ll also notice Boris Karloff in a small but showy part. He played featured roles in18 films in 1931, the year he shot to fame playing the monster in Frankenstein. Crime boss Johnny Lovo is played by Osgood Perkins, the father of Anthony Perkins, star of Hitchcock’s Psycho. 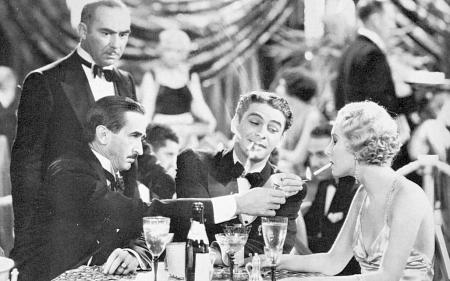 Scarface also stars two fabulous Pre-Code actresses, brunette Ann Dvorak, who plays Camonte’s sister Cesca, and blonde Karen Morley as Poppy. Hawks met Dvorak when he invited Raft to a party at his house, and he brought 18-year old Dvorak as his date. She got a little drunk and asked Raft to dance, and when he resisted did a sexy dance for him to try to change his mind. The incident made a big impression on Hawks, who asked Dvorak to repeat it in the film: “the scene really played like a million dollars because it was something that really happened between George and Ann” (McCarthy). Morley played Poppy with a smoldering sensuality, and Scarface was her favorite film. “Everybody was just in awe of Paul Muni, he was so great,” she recalled. “I was just barely of age, and that set was an exciting place to be. It was all men, and there I was prancing around in gowns that barely got past the censors.” 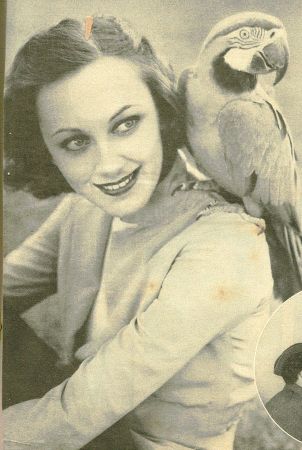 “I didn’t think I’d photograph well,” Ann said to herself when they wanted to make tests of her. “I’m not good-looking enough…and anyway, I’m young and self-conscious. I’m no actress.” 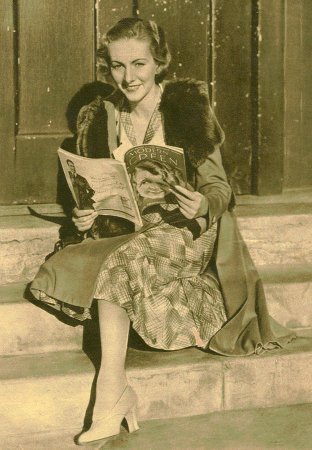 “Karen Morley’s real name is Mildred Linton. Her dramatic career was started by her own interest in stage technique–but for playwriting, not acting. Karen lives with her parents in a modest little Italian bungalow. She says her rise to popularity in pictures proves the Santa Claus story.” Never one to suffer fools gladly, Morley wouldn’t even take off her coat for her publicity shot.

Newspapers marked crime photos with an X to show the location of bodies, and Hawks wanted to use an X in every scene that had a murder. Camonte’s scar is the first of the symbolic Xs in the film. Hawks offered crew members money for their best “X” suggestions. He also did not want his cast to act like stereotyped tough guys. “We saved the animosity for the personal scenes. The other stuff was done without any show of feeling” (Bogdanovich).

Capone’s biographer wrote of the film, “Here was a gallery of psychopaths who wanted to rule the world—and almost did. In its mixture of psychology and gore, the movie was horrifying but also witty. No matter how the Hays Office meddled, Scarface glorified Capone in particular and gangsters in general; they were rich when most folks were bust, they claimed and cast aside women as they pleased and they got away with murder. Anyone who read the newspapers knew that crime DID pay” (Bergreen). 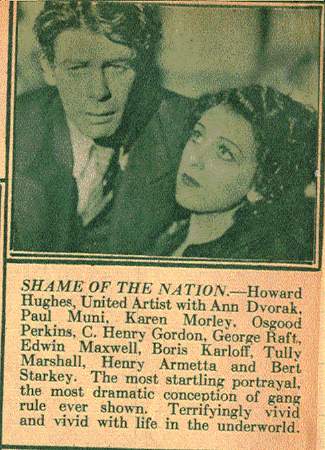 (Photos: “Poppy has her cigarette lit” is from Films in Review, “The gangster picture to end all gangster pictures is from the March, 1932 Silver Screen. All other photos from Hilda Price’s movie star scrapbook. Sources include: Pre-Code Hollywood by Thomas Doherty, Sin in Soft-Focus: Pre-Code Hollywood by Mark Viera, Classics of the Gangster Film by Robert Bookbinder, Hollywood Gangland by John McCarty, Capone, the Man and His Era by Laurence Bergreen, Film Encyclopedia by Ephraim Katz, Howard Hawks by Todd McCarthy, Who the Devil Made It by Peter Bogdanovich, LA Times obituary for Karen Morley by Myrna Oliver, “ Paul Muni” by Jack Jacobs in the November, 1961 Films in Review, The Entertainer: Movies, Magic and My Father’s Twentieth Century by Margaret Talbot.)