A Manhattan socialite marries a mystery man during the heat of a Mexican holiday, and finds herself exiled to his stately manse.  Lang’s bubbling Freudian cauldron (dream sequence by Disney!) simmers with gothic menace. “It deserves rediscovery, despite a production history that rivals the convoluted plot of this film,… created by a cast and crew near the height of their powers” (www.tcm.com) UCLA Archive print.

One of my favorite cinema subgenres are those films from the 40s and 50s that are obsessed with the work of Sigmund Freud. After WW II, soldiers returning with “battle fatigue” introduced a record number of Americans to therapy.  No film is more steeped in Freudian wish fulfillment than this oddball thriller that has gone down in movie history as Fritz Lang’s biggest flop, and one of the biggest financial disasters in the history of Universal Studios.  When I saw this on a raggedy video tape from the Duke University Library (not yet available on DVD) I couldn’t believe how enjoyable it was. 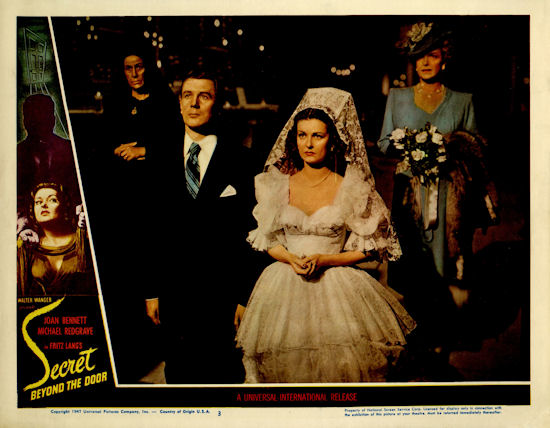 Secret Beyond the Door by Rufus L. King had appeared as a serial in Redbook magazine in 1945.  King wrote novels, plays and screenplays, specializing in mysteries and thrillers.  Fritz Lang was jealous of Alfred Hitchcock having usurped what he thought was his rightful place as “the master of suspense.”  After he saw, and admired, Rebecca, he hoped to make his own play for Hitchcock’s throne.  Lang and his script collaborator, Silvia Richards, were in love, and he had asked her to marry him.  They enjoyed picnics and square dancing, she enthused, “Let me tell you, there’s nothing like a man square dancing in a cowboy suit and a monocle” (McGilligan 353).

Lang and Richards began to change numerous details from the story to suit Lang’s vision.  He wanted it to be an intensely psychological drama.  He had many psychiatrist friends, although he himself shunned analysis. Scriptwriting took all of 1946, although Richards and Hilda Rolfe, who typed the pages, had reservations about the source material straying so far from the original.

The female star of the film is Joan Bennett, who, with her husband, producer Walter Wange,r made some truly amazing noirs, Scarlet Street, The Woman in the Window, and The Reckless Moment.  She was from a distinguished acting family.  Her father, Richard Bennett, was a stage star for half a century, and her older sister, Constance, was a movie star before her.  Joan was a sweet blonde ingénue in the 1930s, but later, with her natural dark hair color restored, she reinvented herself as a more forceful actress. This incarnation lasted all the way to her last entertainment hurrah, as the mysterious matriarch of the tv vampire soap opera, Dark Shadows.  The script for this film was tailored just for her, and included racy scenes of bathing, open mouthed kissing and cleavage forbidden by the Production Code, but which her producer husband managed to get past the censors.  Even though Lang was engaged to Richards, and Bennett was married to the producer, Walter Wanger, Lang and Bennett, at some point, they were reported to have had an affair.  You may judge for yourself whether a passion for her is evident on screen. 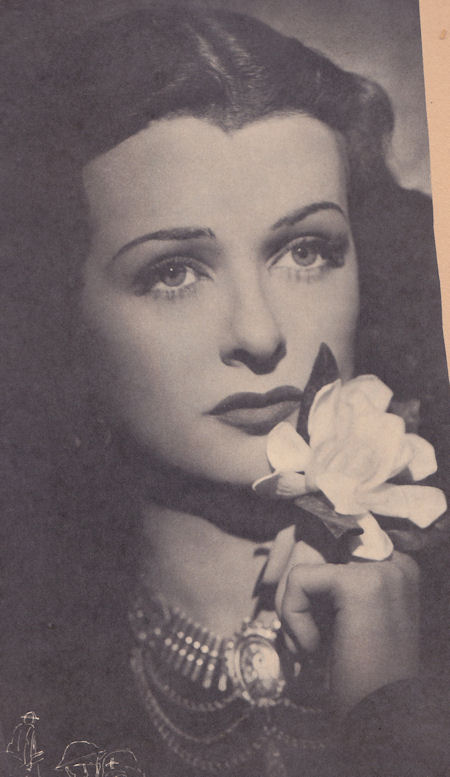 Lang had collaborated smoothly with Bennett previously. But by the time shooting of this film commenced, Lang was cross.  He was denied his choice of cinematographer, and studio pressure was full on the boil with the budget inching above $1 million. Bennett was startled that Lang revealed himself  “a real Jekyll and Hyde character, calm and purposeful one moment, and off on a tirade the next” (Spoto 128). He seemed to delight in tormenting cast members.  Although they had some “thrilling” arguments, at the end, Bennett said they parted friends.   “To me Fritz Lang remains one of the great directors in the history of the business, and working with him was a fascinating exercise in the art of making motion pictures.  On occasion, whenever he makes a trip to New York from his home in California, we still get together for a delightful evening of do-you-remember-when and the-trouble-with–you-was” (Bennett 287).

Her co-star is the British stage actor Michael Redgrave, father of Vanessa and Lynn.  Lang wanted someone whose star power was equal to Bennett’s.  He tried to interest James Mason without success.  Redgrave had been a student in Heidelberg, Germany, and admired the Lang’s films.  Redgrave’s terrifying turn as a ventriloquist in thrall to his dummy in Dead of Night had been screened at the studio, and Lang hired him, even though he had never made an American film.  Theater actors often regarded the screen with distaste, but could not resist the siren lure of cold hard cash.  The amount of money Redgrave was paid for this film, $66,675, was the equivalent of several years’ salary in Britain, not to mention that England was still living austerely under wartime rations.  Redgrave concluded a lovely sojourn in sunny California at studio expense was just the ticket.  The studio wanted to make sure Redgrave looked the part of a visiting movie star.  “Clothes, like everything else, were still rationed in England.  I had spent all my clothing cupons before I left London, thinking I ought to look the part of a visiting English ‘star.’ But, in New York, I was met by someone from Universal International and whisked to a suite in the Sherry Netherland.  I was given a fistful of dollars for expenses. My navy blue chalk stripe suit and ill-fitting dinner jacket were jettisoned and I acquired an entirely new wardrobe” from Saks Fifth Avenue (Redgrave 176).  Director Fritz Lang, in camel hair coat and fedora, welcomed him to Hollywood, and, witnessed by a generous turnout of press, swooped him off in a limousine to a Hotel Bel Air bungalow.

Later, Lang would treat Redgrave harshly.  Bennett’s daughter recalled, “Michael Redgrave was a mess.  He was nervous and uptight, and Fritz was being very naughty…He was diabolical and cruel.  Maybe he thought he was going to get a performance that way” (Spoto 128). Redgrave began to lose his confidence.  He thought, “But Lang must know what he is doing…”  in their previous collaborations Bennett gave “very polished performances” (McGilligan 359).  Even studio visitors advised Lang not to stress Redgrave.  Bennett loved the way Stanley Cortez was photographing her with shimmering glamour.  Her pleasure also fueled Lang’s disdain.  He yelled at everyone, in front of and behind the camera, and predictably began to fall behind schedule.  He thought conflict made a picture better, but many who worked with him did not agree. When filming the climatic fire, he refused to use doubles for his two stars, to punish them. Bennett wrote, “We fled, terrified through the scorching flames, time and time again” (McGilligan 361).

Marlisa Santos writes, “Probably the most overt Freudian depiction of noir psychosis is found in Secret Beyond the Door, a film that features carious recastings of fairy tale patterns bound up with psychoanalytic interpretations of childhood trauma and sexual relationships” (Santos 130).  Not only is Freud invoked by name, but the whole film has a very dream like atmosphere.  The heroine describes her dream, but even when her real life takes over it seems as though she is still sleeping.  Death and love are closely linked in the film, which is rich with doubles, mirrors and other common symbols of noir. Celia’s new husband has a very curious hobby, collecting rooms in which women have been murdered, yet this does not set off any alarms in her head, it’s as if she cannot wake up, and has to follow the dream to the end. Her voice over (also borrowed from Rebecca) contributes to the films strange atmosphere.  The uncertain ending (the film tells you one thing, but it’s hard to accept it as true) continues the hallucinatory qualities. 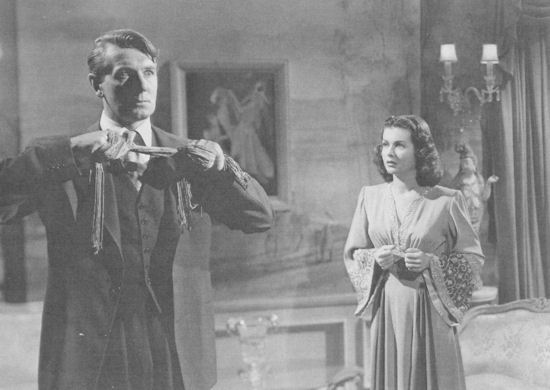 Secret Beyond the Door was, as you will see, a mash-up of the Alfred Hitchcock hits Rebecca and Spellbound.  It exploited a common post war theme, women finding themselves married to men who are strangers, the experience that many a woman experienced when their deeply changed spouses returned from WW II.  Lang contributed his Germanic love for fairy tales and legends, along with his strong visual sense (photographed by the extraordinary Stanley Cortez).  Miklos Rozsa, whose theremin laced score for Spellbound had been so distinctive, brought his prodigious musical talents to bear.

The publicity department had no idea how to promote the film, and the preview audience loathed it.  “Poor” “Beyond human endurance.” “It stinks” they wrote on the comment cards(McGilligan 363). It received the worst reviews of Lang’s career, and was Universal’s lowest grossing film of the year.  And, you will see, it is not without its problems!  But, for the mystery, the beauty of the photography, for the Freudian stew, and the revelation of the Secret Beyond the Door, it’s outrageous cinema fun. 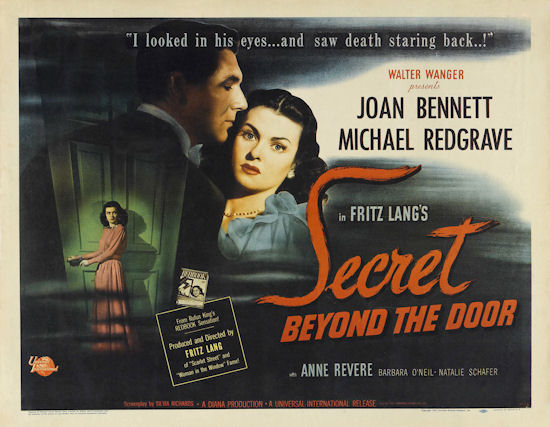 Fritz Lang: The Nature of the Beast by Patrick McGilligan, The Redgraves by Donald Spoto, The Dark Mirror: Psychiatry and Film Noir by Marlisa Santos,  In My Mind’s Eye by Michael Redgrave, The Bennett Playbill by Joan Bennett and Lois Kibbee