The Secret Six is a gangster film, a rare MGM foray into Warner Brothers territory. Meant to be a hard-hitting expose of a Capone-like mob, the film falters when the Secret Six themselves are revealed to be a comic-bookish cadre of masked, crime-fighting bureaucrats. The film’s tough-talking script by Frances Marion was based on a Saturday Evening Post scoop on an actual group of Chicago businessmen who banded together with the state attorney and the Feds. to stop illegal activities in the city.

Wallace Beery is introduced at his slaughterhouse job dispatching cattle with a sledgehammer. A “slab of beef” himself–his favorite drink “a bottle of cow” he’s satisfied with his $35.00 a week until he falls in with a babyface mobster played by Ralph Bellamy, fresh off the train from a NY stage career. The hero, played inertly by former Alabama football hero Johnny Mack Brown, is completely upstaged by a loosey-goosey performance by young, 7th billed, Clark Gable. Screenwriter Marion thought Gable had star potential, and she made his part bigger with every script revision. This is the first of 6 films Gable was to make with Jean Harlow. Her forte was the comic sexpot and her serious role here (and her wooden performance) shows no hint of the sparks she and Gable would strike the next year in Red Dust. But, Beery instantly recognized her scene-stealing potential (if only for her abhorrence of underwear) and made her life on the set miserable. 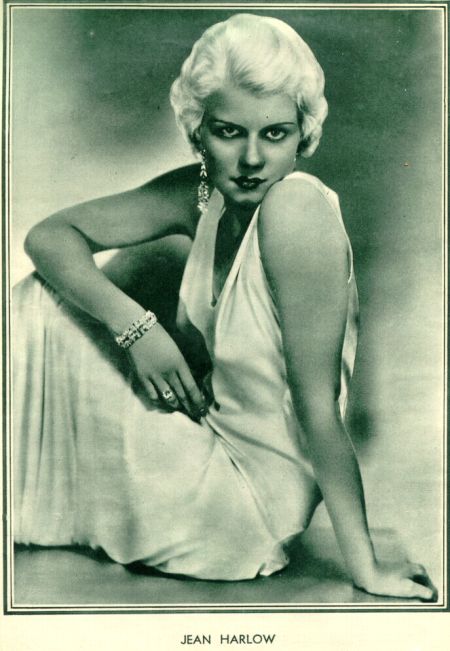 Harlow’s portrait is printed without comment, much as those of other decorative but largely forgotten starlets in the same issue of The New Movie Magazine as Madge Evans, Richard Cromwell, Lois Moran, Irene Purcell, Helen Chandler and Alison Lloyd. In contrast, Gable is already heating up the screen, in the letters section, (“After seeing The Secret Six I would predict a brilliant future for Clark Gable. He was spendid in The Easiest Way, but in The Secret Six, as the reporter, Carl, he gave an almost flawless performance. He has poise and virility beyond the average, and a smile which should become as famous as that of Maurice Chevalier.” Eleanor J. Newman, 70 Howe Street) and in an article by writer Jim Tully. Tully writes, “There is a hidden brutality in Clark Gable. He has large hands, a wide mouth, even white teeth, and dimples and dark hair. His eyes have the ancient allure for women. It is freely predicted that he is on his way to the Throne of Romance once occupied by the lamented Valentino… and is, in my opinion, the most graceful male that ever walked through the land of flickering shadows…It is felt by no less an authority than Irving Thalberg that within a year Gable will be the most popular film player of the period, if not in screen history.” For once, the fevered predictions were fairly accurate.

The real-life Secret Six were, as Louis Pizzitola writes, “without a doubt one of the most elite vigilante groups in U.S. history.” Their members included the chairman of Sears, the President of the Association of Commerce, the head of the Chicago Bar Association, and perhaps even publisher and media mogul William Randolph Hearst. Overtly concerned with the increasing hold Al Capone and his racketeers held on Chicago, care for their own constricting business interests while gangsters held sway over the city was also a motivating factor. They may have raised over a million dollars for their own investigators, stool pigeons and wiretaps, certainly skirting legality in some cases. Hearst produced the film at MGM to capitalize on the newspaper articles about the Secret Six that captivated the public; and of course to promote his own interests.

The Secret Six is extremely violent and filled with unexpected betrayals. Unbelieveably, the advertising was aimed at children, which changed when a 12 year old boy shot a friend in the head after seeing it. (The more things change…). The brains of the mob are supplied by a dissolute attorney played by Lewis Stone, in transition between his romantic leads of the silent era and his future as Andy Hardy’s wise old Dad. Wallace Beery, who’d been in, literally, hundreds of movies since 1914, is riveting as ganglord Louis Scorpio. Marion planned Scorpio’s death to be poetic justice; trampled to death “in the muck of the stockyards” from which he had risen. The censors decreed a conventional “crime does not pay” solution. On the last page of her revised script she penciled resignedly, “the proverbial happy ending.” 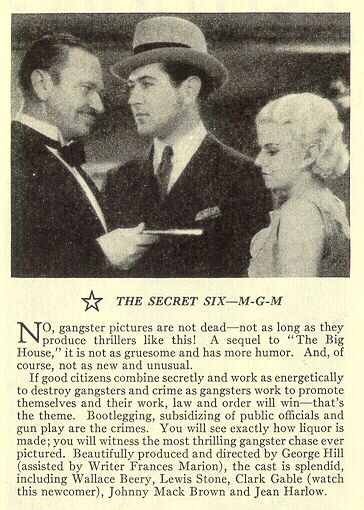 (Photo of Jean Harlow from October, 1931 The New Movie Magazine. Were any of her performances any good in this unflattering style of hair and make-up? Review from Photoplay Magazine, reprinted in The Talkies, edited by Richard Griffith.)