A beloved movie epic, filled with rip-snorting action, mocking humor and delicate humanity. Beleaguered farmers reluctantly engage a band of wandering samurai to defend them from ruthless bandits in this endlessly imitated classic adventure…”this greatest of filmmakers gave employment to action heroes for the next 50 years” (Roger Ebert).

Seven Samurai is Kurosawa’s most famous film. Many writers do not hesitate to call it Kurosawa’s masterpiece, perhaps even the greatest Japanese film ever made. It was, along with Ikiru, the director’s personal favorite of his own work. Thanks to the G.I.s returning from WWII with a new appreciation for foreign cultures, it is also ground zero for the American devotion to Asian martial arts films. The silhouetted horsemen galloping over the horizon in the opening shot of Seven Samurai intentionally blur the distinction between 16th century Japan convulsed by a civil war and the wide-open, lawless spaces of the American West. Three groups of people, the civilized, the savage and those who live between, define both the epic Western and the samurai film, as redefined by Akira Kurosawa.

Akira Kurosawa, Japan’s most famous director, and Toshiro Mifune, the charismatic star of 16 of the directors 30 features, died within a few months of each other in 1998. Their collaborations created a series of movies that influenced countless international filmmakers and created a new audience for Japanese film. Kurosawa is one of the undisputed geniuses in film history, and Japan’s most renowned cinematic storyteller. At times, he was criticized both in and out of his native country for his acknowledged debt to Western art: he had a great admiration for Dostoyevsky, as well as director John Ford. A descendent of samurai himself, he flirted with a career as a painter, much to the disapproval of his army officer father. He accidentally saw a newspaper ad a film studio placed in 1936, seeking assistant directors. After passing the exams (written and oral) he began his long career in film, inspiring such diverse artists as Sergio Leone, Francis Ford Coppola, Martin Scorsese and George Lucas.

Japan had a long tradition of sword-fighting films, but much as Hollywood-style Hollywood epics often sacrifice accuracy to spectacle, they had no real relation to Japanese history. This film was meant to be different. It is set during the Sengoku Jidai, or the time of the civil wars. This was a century-long period when the military class struggled within itself for land and political power. Most samurai films are set in the 17th or 18th century, a time when the professional warrior had an entirely different code of ethics and way of behaving. The Sengoku period was a time when the Japanese world had been turned upside down. Class boundaries became fluid, and the warrior class had freedom: a peasant could still become a samurai then. Forces of change were experienced as forces of destruction. Seven Samurai, Throne of Blood, The Hidden Fortress, Ran and Kagemusha are all set during this era. Kurosawa felt a kinship with his own turbulent wartime and postwar eras, when so much destruction was linked with Japan’s creative energies and national change. European and American audiences brought their post-war experiences to the film as well, and for many, Kurosawa’s movies must have been a gateway to Japanese culture, so recently reviled in Allied wartime propaganda.

The samurai were an educated class, expert in riding, archery, and of course, swordplay. They followed a code, Bushido, the Way of the Warrior. The government and the Emperor of Japan promoted this form of nationalism during WWII, and samurai films were encouraged by the government during the war. For this same reason, the army of the occupation banned them.

Kurosawa had been working on a screenplay about the daily life of a single samurai, a subjected that fascinated him because of his family history. But, this film never came to fruition, nor did a story based on a clan who were expert warriors. But, in the research he uncovered with his collaborators, he found an incident in which a group of farmers had hired a samurai to protect their village from bandits, and in expanding the tale he found this to be the most inspirational subject. He and his writing partners spent 6 weeks in isolation writing their script. They did not want their film to be merely entertaining, but to show a variety of complex, flawed characters in a chaotic world in which good and evil are not always distinguishable.

Kurosawa’s attention to detail meant his research included not just notes on each individual samurai, but also on 101 residents in 23 families. He wanted to extras to live and work together on the set to create the atmosphere adding to the authenticity of his tale. “Kurosawa creates a world so believably real and lived in that it becomes contemporary, one so emotionally true that its time and place become our time, our place. Using everything that he has learned as a filmmaker, Kurosawa’s greatest success with the film is that he puts us in the thick of it” (Galbraith 174).

Seven Samurai was in production for nearly a year, with 148 shooting days. It was the longest and most expensive Japanese film to date. The climax was filmed in a manufactured downpour—one way that he wanted to distinguish his film from the American Western, which always takes place in the heat and dry. It was filmed in the winter, and water was used to wash away the snow that had fallen overnight on the set. Filmed under freezing conditions, Kurosawa was a taskmaster, but his cast and crew were fanatically loyal to him. “On the set, it was just like a war. He was shooting with a fierce expression on his face. He kept screaming the whole time” Mifune remembered (Galbraith 189).

There is no moment in this film where one hero stands as an individual, and that is an enormous contrast to the American Westerns with which it is often compared. The Western pits the lone hero as a moral man against the mob. Samurai and farmer face each other across a gulf of distrust, but they must work together to fight the bandits, a union possible only in a time of social disintegration. This union offers an escape from war, oppression and class conflict.

Kurosawa always insisted that the motion picture should be composed of motion. The motion may be as small as a shot of quivering nostrils or as great as a charge on horseback, but it is always there. He is also careful to show how a thing happens. We hear of plans for the climactic battle, but maps and words are one thing and a vortex of rain, steel, mud and death is something else. Reality is different from illusion.

Every event in the film centers on one basic question: Who will control the rice fields? Rice structures the relations between the classes and has brought the bandits like a plague upon the village. In a country with so little farmable land, rice means everything.

“ An action film can only be an action film. But, what a wonderful thing if it can at the same time claim to depict humanity! This has always been my dream since the time I was an assistant. For the last ten years, I have been wanting to reconsider historical drama from this new point of view” (Kurosawa quoted in “Seven Samurai” by Andre Bazin, Perspectives on Akira Kurosawa p.114)

In its shortened American release, it was retitled The Magnificent Seven. The film recovered its original title, Seven Samurai when a Western starring Yul Brynner took that title. When Kurosawa was asked if he had ever seen it, he said briefly, “Gunslingers are not samurai” (Galbraith 196). 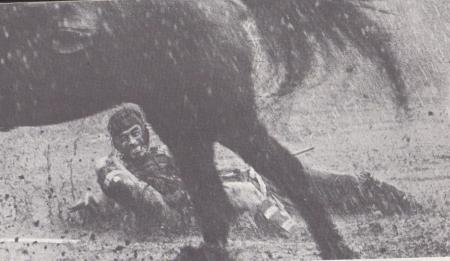