There is no more potent image in American cinema than Marilyn, her white halter dress billowing in the breeze of a Manhattan subway grate. She is luminous in this lusty 1950s-time capsule about a doughy, middle-aged husband, liberated for the summer from his wife and son, who daydreams about the va-va-voom neighbor upstairs. Director Wilder bent the censorship code until it nearly snapped, his script surging with canoe paddles, milk bottles, undies in the icebox and the siren call of Rachmaninoff.

George Axelrod’s play was a huge Broadway hit, the married hero’s yearning for an affair with “The Girl” slyly undermining Post-War insistence on hearth and home. Although Hollywood was interested, the censorious Production Code dictated The Seven Year Itch unfilmable. Wilder was undeterred. He liked collaborating on scripts and teamed up with the playwright to forge an acceptable version. Axelrod wouldn’t let the play be filmed until the Broadway run was over, so they could take their time. The pair couldn’t have hit it off too well. Axelrod brought a copy of the play to their first meeting. “‘I thought we might use it as a guide,'” he said mildly. ‘Fine,’ said Billy, who took the script and dropped it on the floor, ‘We’ll use it as a doorstop.'” (SikovOSB).

The text is but the skeleton of Wilder’s film. Dialogue was padded with outrageous puns, gags and parodies. Most importantly, the adultery theme had to be sanitized for the screen. In the play, Richard Sherman and The Girl do sleep together. In the film, they explicitly do not so use your imagination. Wilder begged the producers, “Look, unless they do it, we have no picture. I would just like to have one tiny little scene where the maid of the Tom Ewell apartment is making the bed and finds a hairpin. That’s all I want, nothing more. The whole aspect of the picture would have changed.” (Sikov OSB). He did manage to outmaneuver the censors on numerous other issues.  Rewatching in 2022, I like the fact that she does not sleep with him–because she would just be trading sex for air conditioning.  And no matter how hot her apartment is, that doesn’t seem right.

When asked why the heroine didn’t have a name, Axelrod said, “The truth of the matter is that I could never think of a name for her that seemed exactly right, that really fit the girl I had in mind.” In the stage version of The Seven Year Itch The Girl, as played by Vanessa Brown, was attractive, but average. And, she was allowed a bit of her own fantasy life, as well, instead of being merely the embodiment of a man’s fantasies. (As she debates whether or not she should spend the night with Richard she muses, “I mean you can understand a person wanting to find out something about life and everything before she gets married and all settled down and has to start getting in by one o’clock again”). She’s not stupid (the last book she’s read was Catcher in the Rye) and is trying to “find herself ” in this case by the experience of sleeping with a married man. A revival, with The Girl played as an intelligent free spirit, making Richard Sherman’s fantasies a complete delusion; now THAT would be an interesting interpretation. 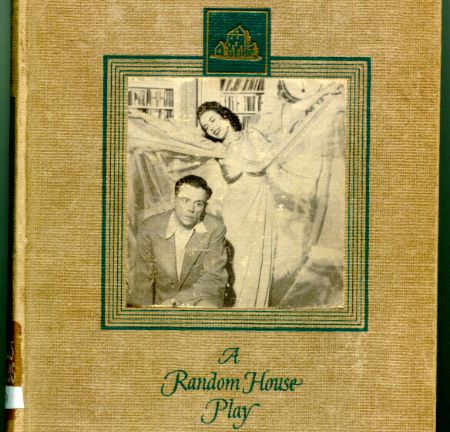 Marilyn Monroe was set to star from the beginning, and Wilder wanted to make sure that he had a leading man who wouldn’t wither under her star wattage. He interviewed the then unknown Walter Matthau and was quite enthusiastic about him for a while. Gary Cooper, Jack Lemmon, William Holden and James Stewart were also mentioned at one time or another for the part of Richard Sherman. But eventually, it was Broadway star Ewell, after all. 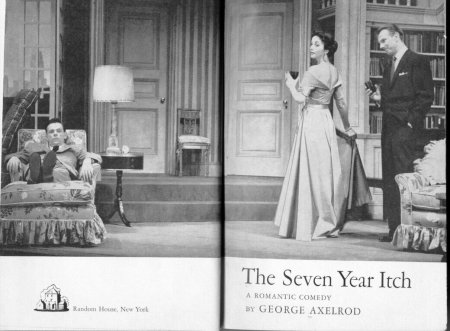 The film began shooting in New York, in front of a rented apartment on 164 East Sixty First Street. Several days later, there was a night scene scheduled with Marilyn and a subway grate at Lexington Avenue and Fifty First Street. The event was set up more as a publicity stunt than as an actual shoot, with thousands of frenzied onlookers in attendance, including Marilyn’s disgruntled husband, Joe DiMaggio. “Photographed again and again, the publicity stills became almost as famous as the shot of the Marines raising the flag on Iwo Jima.” (McConathy and Vreeland). Surprisingly, the stills are far racier than what’s seen in the movie, which was eventually filmed in the controlled atmosphere of the Fox Studio. DiMaggio was so offended by both his wife’s exhibitionism, and the crowds slavering reaction to it, that their marriage effectively ended that night.

Marilyn wanted to play The Girl so badly that she reluctantly did the studio’s choice for her, There’s No Business Like Show Business, first and went into this next film without a break. She was, as always, chronically late. But Wilder was not overly concerned with her tardiness. “I have an Aunt Ida in Vienna,” he once said, “who is always on time, but I wouldn’t put her in a movie.” (Lally). “Directing her was like pulling teeth. But when you finished with her, when you had made it through forty or fifty takes and put up with her delays, you found yourself with something unique and inimitable. When the film was finished, you forgot your troubles with her.” (Sikov OSB). Wilder would direct her four years later in Some Like It Hot. She would become increasingly difficult to work with as her personal problems intensified. Ewell, who had played Richard Sherman for 730 performances on stage had no complaints about Monroe. Perhaps he sensed that his performance with her would be his ticket to immortality. 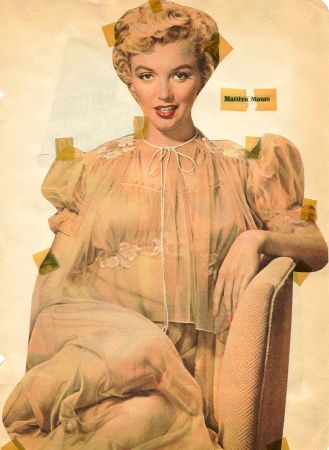 This scrapbook has many images of teen stars like Jane Powell, Shirley Temple and June Haver–and one of Marilyn.

William Travilla designed most of Marilyn’s most memorable costumes both on and off screen during her brief career. He did 10 sketches for The Girl in a weekend, including the white halter neck dress. Travilla denied the dress was bought off the rack, as reported in Hollywood Costume: Glamour, Glitter, Romance! By Dale McConathy and Diana Vreeland. He asserted that in the studio era, everything was designed especially for the screen. Several versions exist, as well as the reproduction made by designer John Kloss for the “Hollywood Costume: Glamour, Glitter, Romance!” exhibit at the Metropolitan Museum of Art in 1976. 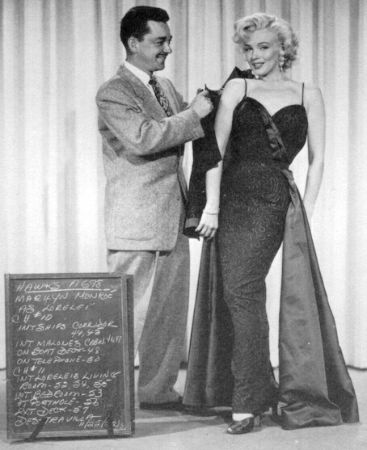 A costume check still from “Gentlemen Prefer Blondes” becomes a photo op for Marilyn and her designer, William Travilla. 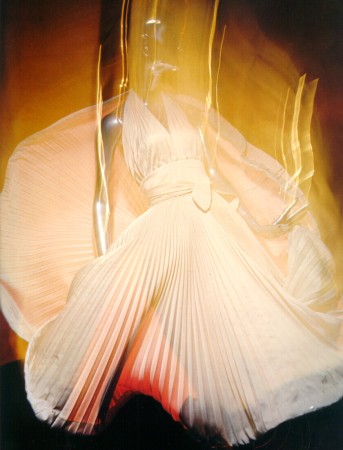 John Kloss’ 1976 reproduction of Marilyn’s dress for the Met

Has any star been more written about than Marilyn? All I can add is that there are hundreds of Dumb Blondes in the movies, and nobody played them more sweetly, more knowingly than she did. So many of them (particularly in the 1950s) are hateful, but Marilyn never is.

The Seven Year Itch unspools in a sweltering un-air-conditioned New York City. The itch Richard Sherman longs to scratch is not a heat rash, but the 50s pox of repressed sexual urges. In Ed Sikov’s great book on 1950s comedies, Laughing Hysterically, he summarizes the decade’s obsessions as “coffins, pills, drinks, songs, breasts and psychiatrists’ couches.” He continues, “When we look back at the 1950s we see a culture of extreme neurosis and paranoia, an age that was defined by inner turmoil and external threat but that had nonetheless never had the relaxing benefit of a full-fledged breakdown.” Shrinks, cigs and martinis barely help Richard keep “the lid on his id” (Biskind). And Marilyn is such a feverish object of desire, it is amazing that the hero finally takes his canoe paddle up to Maine and his prim wifey, after all.