Shadow of a Doubt explores the moral rot threatening placid Santa Rosa, California. Uncle Charlie is a charmer, but does his adored niece want to discover his dreadful secret? Hitchcock identified with the character closely enough to write some of his speeches (unusual for him) and to give Uncle Charlie his own childhood bicycle accident. Hitchcock enjoyed the congenial collaboration with Our Town playwright Thornton Wilder and the location filming in Santa Rosa, and considered this one of his favorite films. The cast and crew lived with the locals and were coached by them to ensure an aura of impeccable Americana.

This film brought murder, as Hitchcock said, “back to the home, where it rightfully belongs” (Harris and Lasky). The film was set, as well as shot, in the small town of Santa Rosa, California, which the director liked so well he bought a house there. The script is slow, literate and character-driven, written by Thornton Wilder and Sally Benson, best known for her sentimental Meet Me in St. Louis. The setting and characters were intended to be as realistic as possible, with the suspense created by the sympathetic portrayal of its villain, sociopathic gigolo Uncle Charlie. The film began as a 9-page story outline suggested by Gordon McDonell, the husband of the head of the Selznick studio’s story department. McDonell was writing a hard-boiled mystery novel at the time, and this story outline is retained in the final film only in bare bones form. “According to a 1943 article in the New York Herald Tribune, McDonnell based “Uncle Charlie” on a ‘more or less obscure drama’ that had actually happened in Hanford, where a serial ladykiller from New York, who had thought himself safe in the bosom of his sister’s family, had been arrested in 1939, to the amazement and chagrin of the townspeople” (Krohn).

Hitchcock loved working with Wilder. He said, “In England, I’d always had the collaboration of top stars and the finest writers, but in America, things were quite different. I was turned down by many stars and by writers who looked down their noses at the genre I work in. That’s why it was so gratifying for me to find out that one of America’s most eminent playwrights was willing to work with me, and, indeed that he took the whole thing quite seriously” (Truffaut). Wilder was not particularly enthusiastic in the beginning, and took the job to make money to provide for his invalid sister. At first, he complained to critic Alexander Woocott about the “corny story” but after beginning with Hitchcock, he changed his mind. “The only news I have for you is this: that I’m deeply interested in the movie we’re doing, that Mr. Hitchcock and I get on fine together. In long story conferences we think up new twists to the plot and gaze at each other in appalled silence as much as to say, ‘Do you think an audience can bear it?’” (Krohn). He and Wilder would discuss the story in the morning, and in the afternoon Wilder would write scenes here and there, not in consecutive order, long hand, in a high school notebook. Before he had completely finished the script, he had enlisted in the Psychological Warfare Division of the US Army, and wrote the last pages on the train with Hitchcock before beginning his military service. Sally Benson worked the dialogue for the children, and added several colorful minor characters. Actress Patricia Collinge, also a writer, wrote some of the dialogue for her character, the mother (named Emma after Hitchcock’s own mother) and the love scenes between young Charlie and the detective.

Joseph Cotten took a risk playing villainous Uncle Charley, but perhaps the studio “didn’t consider Orson Welles’ protégé such a valuable investment” that he couldn’t be cast in a negative role (Phillips). He said in his autobiography that his part in Shadow of a Doubt was recalled at least as often as in Citizen Kane or The Third Man. Having never played such a part before, he asked Hitchcock for guidance. Before the cast and crew left for Santa Rosa, Hitchcock took Cotten on a stroll through Beverly Hills, and asked him if he could pick a potential murderer from the crowd on Rodeo Drive. Cotton made a few suggestions and realized that Hitchcock simply wanted him to act naturally, “Forget trying to intellectualize Uncle Charlie. Just be yourself” (Cotten). 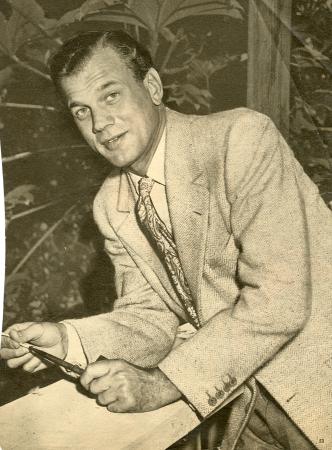 Teresa Wright’s career thrived in the 1940s. A stage actress uninterested in the Hollywood glamour machine, she was nominated for an Oscar for her first three screen performances, in The Little Foxes (1941) Pride of the Yankees and won as Best Supporting Actress for Mrs. Miniver (both 1942). She also shone as the daughter of returning veteran Fredric March in Best Years of Our Lives (1946). Still alive, she last performed with Matt Damon in The Rainmaker (1997) directed by Francis Ford Coppola. (N.B. Sadly Ms. Wright died shortly after our screening, on March 8, 2005 at the age of 86). 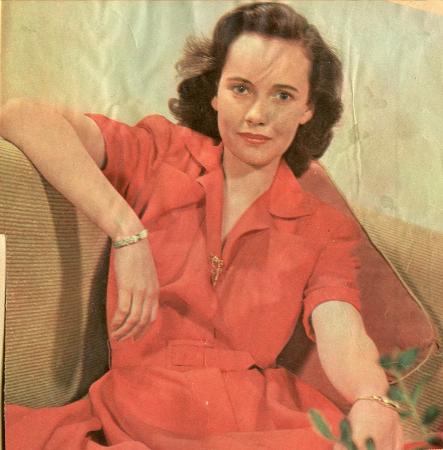 You can’t make a pin-up out of me fan magazine photo: “Teresa Wright. Good, sound acting talent instead of the usual fanfares of publicity account for her slow, steady rise in Hollywood.”

Stage actor Hume Cronyn, who plays Herbie, arrived in California to make his first film after Hitchcock saw a screen test he had made years before for another film. The producer warned him that he wouldn’t be hired because he was too young for the part. But, Cronyn went to the interview with the director, and after chatting for a while, Hitchcock announced, “We’ll have to mess around with a little make-up—some gray in the hair, perhaps, and glasses. We start shooting in about three weeks. Will you stay here or go back to New York?” Cronyn was surprised to find he had the part after all, and said that it was a turning point for him, in fairly short order he became a film actor, married his wife, Jessica Tandy and became a father. Those of you who go to Playmakers in Chapel Hill, have no doubt seentheir daughter Tandy Cronyn perform there. Like Norman Lloyd, another stage actor who had just made his first film, Saboteur, for Hitchcock, he remarked in his autobiography on the director’s huge appetite for goblet sized martinis.

“Wilder and I went to great pains to be realistic about the town, the people, the décor” (Maxford). The exteriors were not sets. Although one reason for shooting on location was authenticity, another was the newly imposed wartime guideline that no Hollywood film could use more than $5,000 of new materials for set construction. Hitchcock found just the genteely shabby middle class house he wanted in Santa Rosa, at 902 McDonald Avenue, and prevailed upon the couple who owned it to rent it to the studio. Wanting the house to look its very best, they had it spruced up and painted, much to Hitchcock’s horror. He had to have the studio painters restore it to its run-down glory, although, after the location crew left, he had it repainted as the owners wished. Crowds were respectful during the location work. Cronyn signed his very first autograph for a girl who noted his performance in a scene and then frowned at her autograph book and advised, “Now, hurry up and get famous!” Some small roles, like that of Teresa Wright’s younger sister were cast with locals, as were most of the extra parts (at $5/day). The closeness of the cast and crew on location contributed to the family feeling of the shoot. The breakaway set reproducing the Santa Rosa house in which the interiors were filmed was built for $1,987, well under budget.

Shadow of a Doubt’s disturbing ambiguity marks it as the first of Hitchcock’s great American films. The nuclear family is besieged by the forces of darkness. Mundane existence may be boring but it is safe, kept free of the threat of undue excitement. Many of Hitchcock’s famorite themes occur here, the doubling of characters, mistaken identity, the sense of self in doubt. Peter Bogdanovich asked Hitchcock, “Does Cotton really love Wright in the film?” and Hitchcock replied, “I don’t think so. Not as much as she loves him. And yet she destroys him. She has to. Wasn’t it Oscar Wilde who said, ‘You destroy the thing you love.’? Shadow of a Doubt was a most satisfying picture for me—one of my favorite films—because for once there was time to get characters into it. It was the blending of character and thriller at the same time. That’s very hard to do.”

Thanks to Mike Mashon at the Library of Congress for the loan of the archival print. 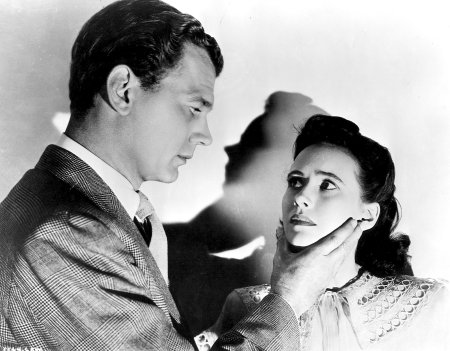 (Portrait photos of Cotten and Wright from anonymous movie star scrapbooks, two shot from Jerry Ohlinger’s Movie Materials Store. Sources include: Films of Alfred Hitchcock by Robert A. Harris and Michael S. Lasky, A Terrible Liar, by Hume Cronyn, Vanity Will Get You Somewhere by Joseph Cotten, A-Z of Hitchcock by Howard Maxford, Hitchcock—The Murderous Gaze by William Rothman, Alfred Hitchcock by Gene D. Phillips, “All in the Family, Alfred Hitchcock’s Shadow of a Doubt” by James McLaughlin in A Hitchcock Reader edited by Marshall Deitelbaum and Leland Pogue, Who the Devil Made It by Peter Bogdanovich, Hitchcock/Truffaut, Hitchcock at Work by Bill Krohn.)