The Grand Tetons loom over the farm of a sodbuster, his wife and son, and the weary gunfighter who rides in one day looking to escape his past.   The breathtaking Oscar-winning cinematography sets the stage for a dramatic life and death conflict. “Shane wears a white hat and Palance wears a black hat, but the buried psychology of this movie is a mottled, uneasy, fascinating gray”  (Roger Ebert).

Jack Schaefer author of Shane, was born in Cleveland, Ohio and had never been West of Toledo when he wrote Shane.  He wrote three more Westerns before visiting the American West, and, after visiting, he and his wife promptly moved to Santa Fe, New Mexico in 1955.  Although he wrote other books that became films, this is the most famous one.  Indeed, one of the most famous Westerns of all, often cited as one of the greatest, #3 on the AFI list of greatest Westerns, 97% fresh on Rotten Tomatoes, and so on.

Schaefer’s Shane is a compact novel told from a child’s point of view; Joey Starrett, in the novel called Bob.  In the book, the boy is older, a victor in playground scraps, who cuts school to go fishing.  In the film, he’s much younger, and does not hang out with other kids.  Foreshadowing violence does not appear until almost midway through the book, which begins as a tranquil idyll of landscape and the virtues of farmwork and community.  Bob’s narration gives it a fairy tale like quality.

“I wanted more and more to be like Shane, like the man I imagined he was in the past fenced off so securely.  I had to imagine most of it.  He would never speak of it, not in any way at all.  Even his name remained mysterious.  Just Shane.  Nothing else.   We never knew whether that was his first name or last name, if indeed, any name that came from his family.  ‘Call me Shane’ he said, and that was all he ever said.  But, I conjured up all manner of adventures for him, not tied to any particular time or place, seeing him as s slim and dark and dashing figure cooly passing through perils that would overcome a lesser man” (Schaefer 52)

Paramount bought the rights to Shane almost immediately, as a vehicle for Alan Ladd, perhaps, because the hero of the book is described as being physically slight, as was the actor.  Ladd was born in Hot Springs Arkansas.  His father died when he was four, and after his mother remarried, the family moved to Hollywood.  Alan excelled at high school swimming and diving; in 1932 he was West Coast diving champion. He also became enamored of high school dramatics.  He was dropped from an early contract at Universal because he was too short, and found work on the radio.  Ladd had been knocking around Hollywood for years without much success; he may have had bits in as many as 150 films; his most famous, as one of the faceless reporters in Citizen Kane.  Sue Carol, a former silent film actress, had become his agent and lover (although they were both married). He was blond, and only 5’ 6” in the era of “tall dark and handsome.” He became a huge star as the kitten-loving hitman of This Gun for Hire.  He died at the age of 50 from an overdose of sedatives and alcohol, and in spite of an earlier suicide attempt, the death was ruled accidental. 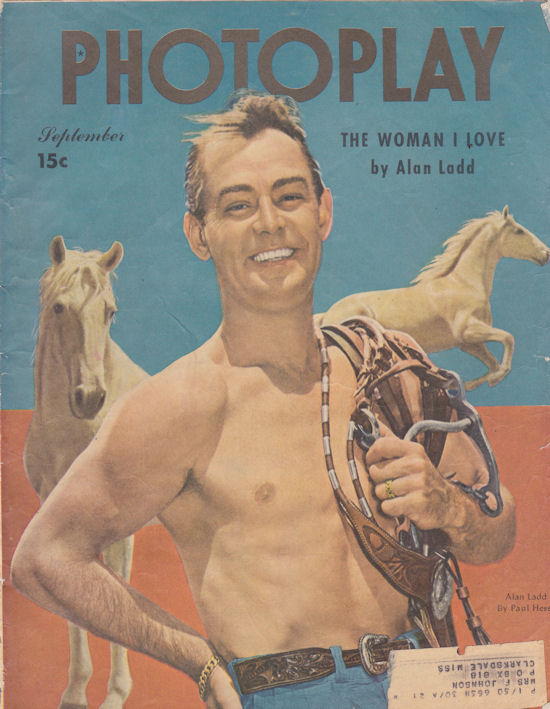 Schaefer was never considered as a candidate to adapt his own novel for the screen (to be fair, he had no movie experience), and the eventual screenwriter was guided by director George Stevens’ copious margin notes, in an unusually close adaptation of the novel.  Stevens hired Joe DeYong, an authority on Western history to act as a technical advisor.  He changed much of the dialogue, based on the way people on the frontier really talked, like saying “somebody” instead of “someone” (Moss 190).

Stevens started out in the silent era, directing Laurel and Hardy and Our Gang comedies at Hal Roach.  He knew how to improvise on location, and he knew how to listen to the contributions anyone on set  had to make (although in the case of studio executives, he often as not ignored them).  Unlike directors such as John Ford or Alfred Hitchcock, who controlled their work by shooting a minimal amount of footage, Stevens shot a lot of film, but still shaped the material with a strong hand.  Stevens shot over 363,000 feet of film, the finished version is a little over 10,000 (Countryman 30). 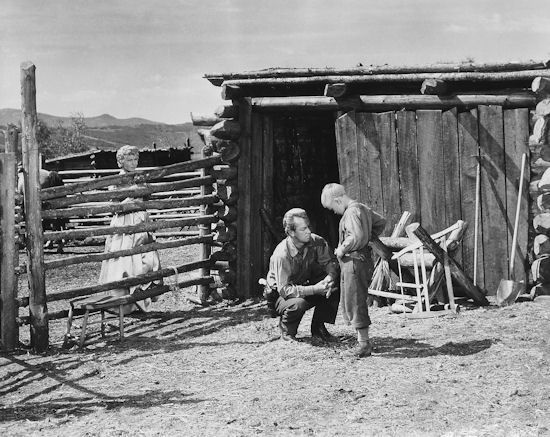 Even though the novel had been purchased for Ladd, Stevens had hoped for Montgomery Clift, opposite William Holden.  Van Heflin, who would play the farmer, was a stage actor, but he was rather weak on the charisma, compared to Holden.  Brandon De Wilde was considered “the best child actor available” (Countryman 27).  Jean Arthur, who had worked with Stevens before,  was the only choice for Marian.  Ben Johnson, a favorite of John Ford, felt his role in Shane was the first one that was really challenging as an actor, which would lead to his late career Oscar in Peter Bogdanovich’s The Last Picture Show.
The film was shot on location near Jackson Hole, Wyoming, on land owned by the Rockefeller Foundation, north of a small town called Kelly.  The spot was dry sagebrush plain, so the stream is artificial, with the mountains actually much farther away, the cinematographer foreshortened the landscape with a strong telephoto lens.  A few location sets were built, and the interior of the cabin constructed in the gymnasium of Jackson Hole High School.  The weather was a challenge, 26 of the 31 location days were disrupted by bad weather, although Stevens never missed an opportunity to shoot dramatic skies.  “Slow progress” was frequently noted in the reports, due not just to the weather, but the cumbersome 3 strip Technicolor cameras and the challenge of working with a child actor.  There was still a lot of work to do back in Hollywood. 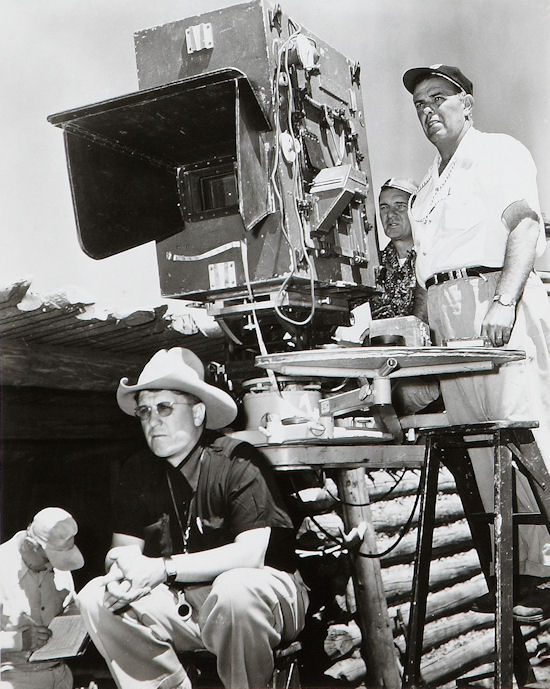 Shane does not refer to any particular historical event, as My Darling Clementine did last week.  Instead, it philosophizes about the open range and encroaching civilization.  Native American rights are not mentioned, even though in the book, Schaefer refers to Standing Rock, a location that takes on contemporary significance.  Stevens was deeply interested in the detail of daily life on the frontier, and created that as accurately as he could.  For example, as in many early frontier towns, buildings are on only one side of the street.  The reason many Western movies have two sided main streets was so that you couldn’t see the rest of the studio backlot.

Clothing is worn, and sourced to the late 19th century, with the exception of Marian’s attire.  Not only would a woman never have worn trousers during this era (unless she was explicitly cross dressing) but her 1950s poodle haircut is not just inaccurate but, for me, terribly distracting.  This was surely a case where the star’s desire overrode any attempts at authenticity. 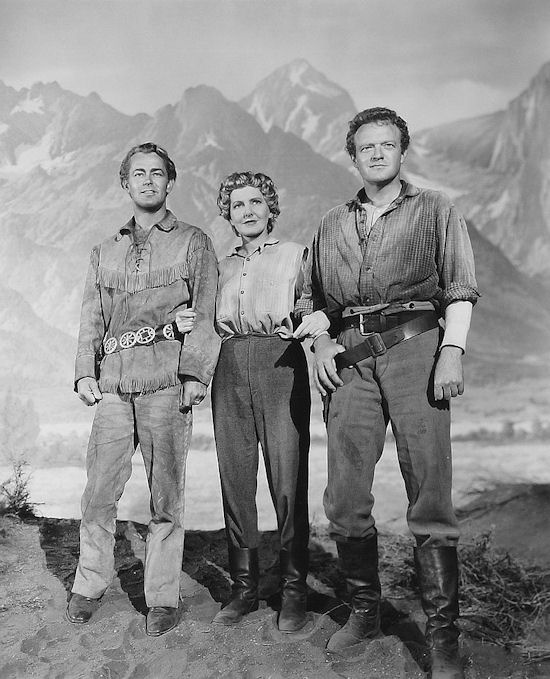 The characters are emotionally complex for a Western.  Shane is an oddly feminized character, with his dude-ish fringed buckskin duds and long blonde hair.  He’s so slow to action that it gives other characters plenty of leeway to underestimate him.  What is a man? Is a question posed by his gentle manner and his pacifism.  Marion, the frontier wife is given some submerged passions of her own.  Stevens like complex female characters in his films, and the life of the homestead wife was hard and lonely.  She’s dedicated to hearth and home, but that doesn’t prevent her slumbering desires to be awakened by a stranger more romantic than her stolid husband.

Stevens came back from World War II disturbed by all the guns he saw in society.  In Germany, kids played cowboy, perhaps echoing the American heroes who had vanquished fascism.  Back at home, Roy Rogers was king, and heroic gunslingers ruled movies, and soon, television.  He wanted to demystify the myth of the heroic gunslinger.  Shane was his war picture.  “When you ask a man to fight and to take a life, you not only ask him to risk his own life, but you ask him to make a great sacrifice of his moral ideals” (Moss 180). 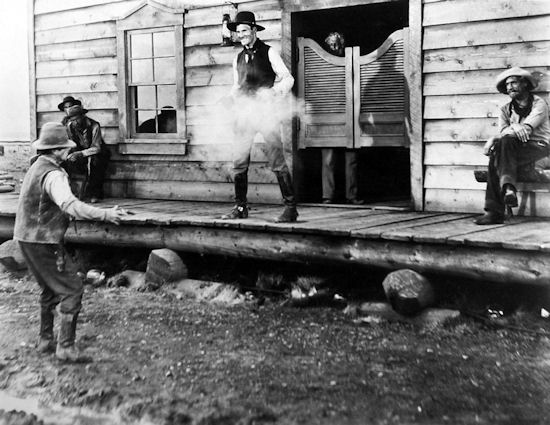 Shane was meant to be the White Knight of mediaeval legend, the lone hero going out to do battle against great odds, his past mysterious.  Perhaps he is a descendent of  James Fenimore Cooper’s heroes, belonging entirely neither to the wilderness or the community.  The American West had significance for Stevens, personally.  He grew up on the West Coast, and had spent happy days in Wyoming and Montana when he was young, photographing silent films starring Rex, the Wonder Horse.  He embraced the romanticized frontier past, while fearing the reign of sanctioned violence.  He also represents the WW II GI returning home from the war, feeling damaged and struggling to integrate into family and community.  All great Westerns strive to evoke a kind of idealism that is hard to find in present day films or television.

The film is revered both by critics and audiences alike.  It’s the favorite of some unlikely people, like Woody Allen, who said, “Shane is a sort of fine piece of poetry.  For whatever reason, probably because Stevens himself had some of the poet in him” (Moss 183) 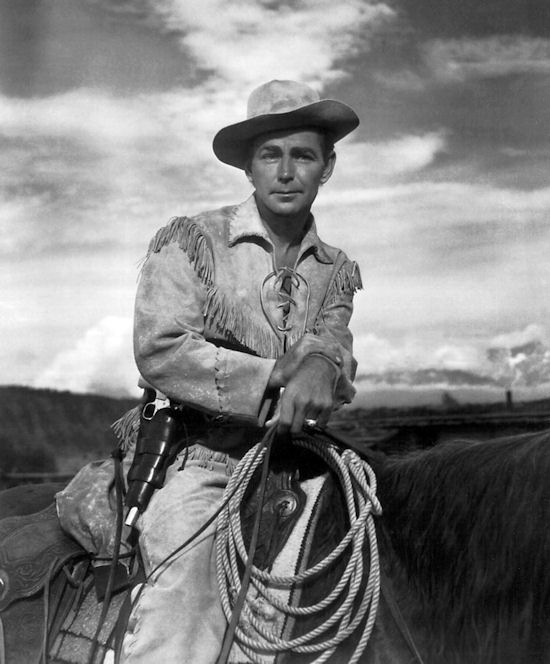 If you’d like to hear me on the radio talking about Westerns: http://wunc.org/post/movies-radio-best-western-0