“It took more than one man to change my name to Shanghai Lily.” A tumultuous train trip from Peking to Shanghai, commandeered by revolutionaries, and lensed in lush, stylized chiaroscuro, was the top grossing film of 1932. Two reunited lovers face death, and two women with checkered pasts entwine fates as Chinese American silent star Wong holds her own against smoldering Dietrich. 100% on Rotten Tomatoes.

Josef von Sternberg and his muse, Marlene Dietrich, made some of the most visually stunning films of the 1930s.  Obsessed with the film’s design; the plot and characterizations take a less important role, Shanghai Express is considered the pinnacle of their collaboration.  His biographer stated, “Had von Sternberg made only Shanghai Express, his position in the pantheon of filmmaker would be secure” (Baxter 142).

Von Sternberg and Dietrich had a long and complicated relationship. A bit of their background together can be found on my Morocco page, an essay about their first American film.   She had been his muse since the days of The Blue Angel in Germany. Before production on this film began, von Sternberg’s wife sued Dietrich, also married, and with a small daughter, for alienation of affection from her husband.  They were apparently having an affair, but Dietrich was perennially non-exclusive in her affections. The press made much of this, labeling her a “love pirate” a scandal which certainly did not injure her ability to play a notorious woman in their next film together. 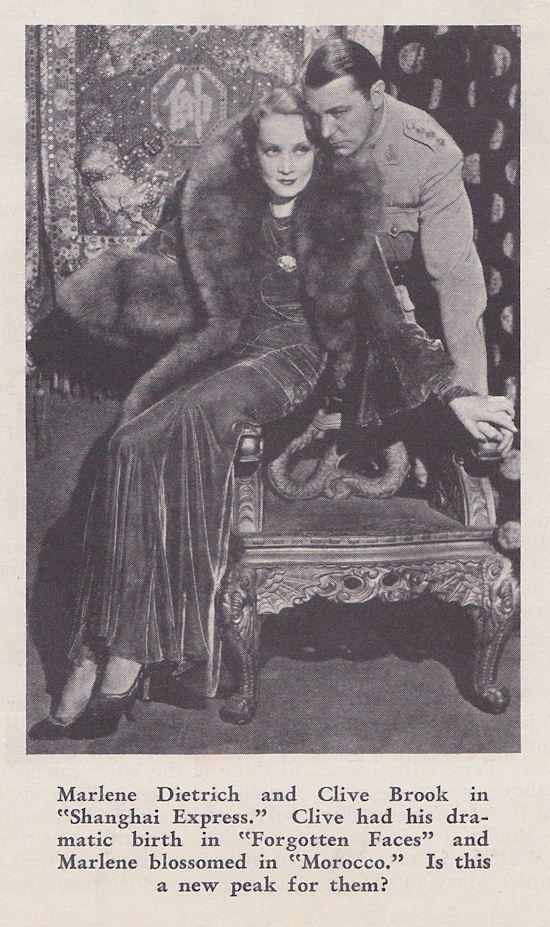 Harry Hervey’s 22 page story was expanded by Jules Furthman into von Sternberg’s fantasy, “a China built of papier-mache” (Baxter 143). Thousands of Cantonese-speaking extras, with a few larger parts being filled by correct Mandarin-speaking Chinese, were recruited for convincing background.  The Sante Fe railroad rented him a train and closed two stations.  The railway cars were painted with authentic Chinese characters and camouflage patterns, sometimes by the director, himself.  The film exists for its design, by Hans Dreier and his assistants, Peter Ballbusch and Richard Kollorsz. The sets were built so pressingly close to the tracks that the locomotive accidentially plowed into them in rehearsal.

The result of all this obsessive attention to detail was not to make the film more realistic, but less.  Everyone in the film has something to hide, and the layers of disguise pile on top of one another.  Black and white are used as dramatic contrast, but texture is important, too, and Sternberg’s supervision of Lee Garmes cinematography creates a visual symphony that is distinctively his own.  Sensuality is represented by feathers, fur, veiling, silk, sequins, net and lace.  Sternberg uses the oppositions of “appearance/reality, faith/distrust, understanding/blindness” (Del Gaudio 83) symbolized by light and dark. Von Sternberg was apprenticed in a millinery store, and had worked in a lace warehouse and had an unusual appreciation for costume accessories used as enhancement and disguise.  His obsession with Dietrich’s appearance is a secret to no one who has seen the films they made together. 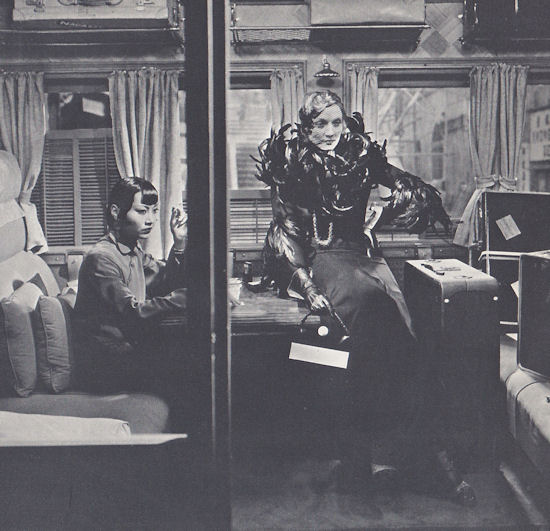 All the elements of the film were designed in a strict black and white palette.  No element is more striking than Marlene Dietrich’s costumes, designed by Paramount designer Travis Banton.  Her unique hats were executed by the milliner, John Harburger, known as John Fredericks, or Mr. John.  She enters in a cloche trimmed in dramatic black feathers; according to Maria Riva, Dietrich’s daughter, the entire Paramount costume department was scoured searching for the most dramatic options until the choice was made, Mexican fighting cock feathers, pearly black with a green iridescence. 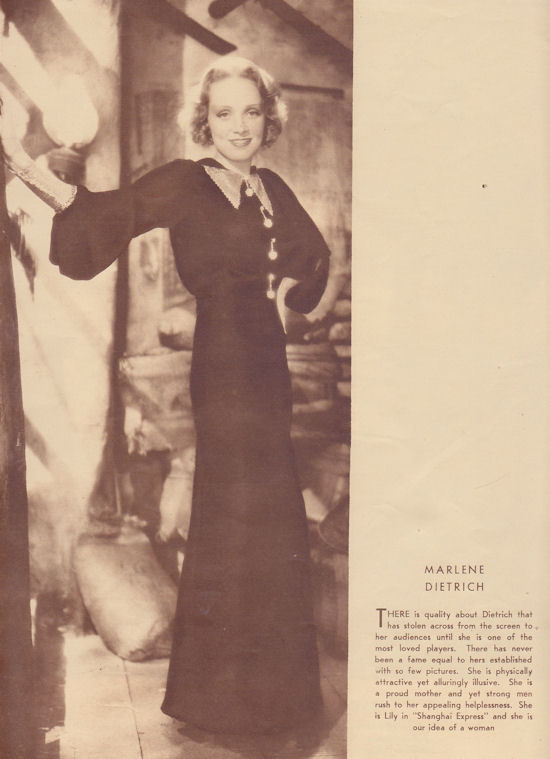 A smiling portrait in costume from Silver Screen, March 1932

According to Dale McConathy and Diana Vreeland, “One of the most memorable movie costumes, Travis Banton’s gown for Marlene Dietrich in Shanghai Express, 1932, summed up the power of the femme fatale.  Significantly, this power is suggested by layers of feather and beads spilled over black crepe—the face hidden behind a veil and the hands encased in gloves” (McConathy and Vreeland 127).  Hollywood gossip columnist Hedda Hopper thought Dietrich looked like a hausfrau before meeting Banton.  “Banton worked tirelessly with Dietrich and director Josef von Sternberg to craft her public image; they were a team for whom the only acceptable outcome was perfection.  Dietrich’s daughter Maria Riva remembered that ‘day in and day out (they) worked, sometimes for 12-hour stretches.  My mother never tired, such normal things as breaking for food, bathroom, and rest did not exist while Banton prepared the clothes for a film’” (Landis 133-4).  The slim black dress pictured above has glittering detail at the neck and wrist. Shimmering on screen, it looks lilke Lily is dressed in Art Deco chain mail, significant, as she is about to make a nobel, knightly sacrifice. 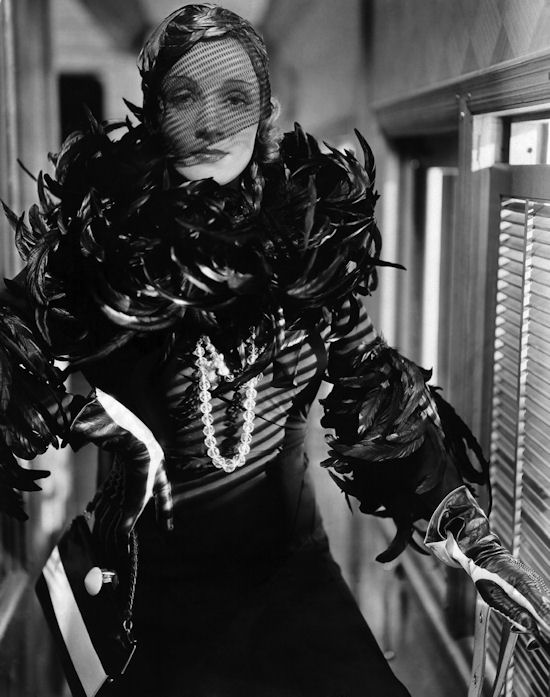 This is how Dietrich dressed off camera. As you can see, the media considered her outfit newsworthy.

Another dominant design element is that of Chinese calligraphy, seen on newspapers, telegrams, passports and visas.  The rhythm of the train underscores the entire film.  Clive Brook recalled, “I remember very clearly ‘Von’ telling us we were on a train, and he said that people on a train always talked in rhythm with the wheels.  I was dashed if I could really see what he was driving at, but I do remember very well him bringing a metronome on the set and saying, ‘Now, that’s the rhythm of the wheels.  Talk in time with that.’ Darn difficult, you know” (Baxter 145). The tracking shots, the cutting, the trembling motion of Lily’s clothes, all contribute to the concept of a story in motion.  Von Sternberg said the movie was a story about a train.  It’s an adventure story, a romance, but dominantly, a triumph of cinema atmospherics. And, if the dialogue was less than realistic, and the acting hampered by these restrictions, it was secondary to the hypnotic visuals.  Von Sternberg’s single minded vision made him tyrannical on the set, anything out of place could trigger a tantrum.

Some described it a “Grand Hotel on a train” but unlike that star-studded film, Shanghai Lily and her companion are the only characters to really care about, incredibly beautiful, mysterious, veiled, swathed in a voluminous wardrobe of no period, only sexual mystery. 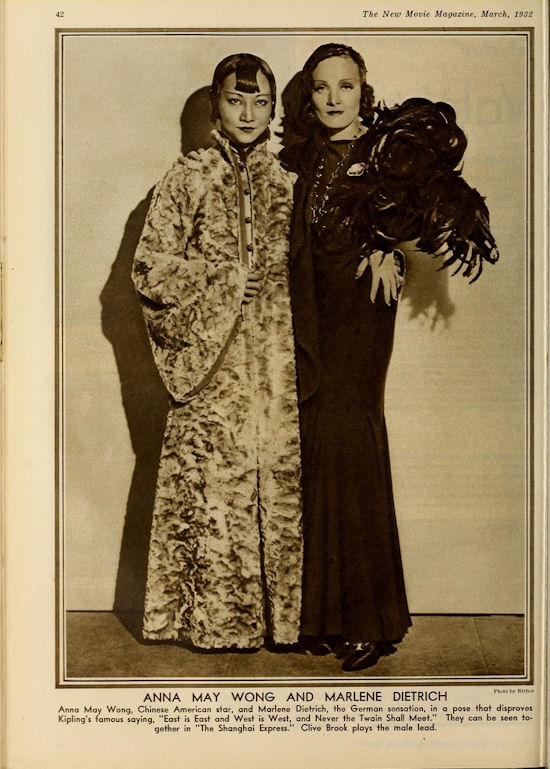 Anna May Wong (an old friend of Marlene’s from Berlin) plays Hui Fei, in her greatest role in Hollywood talkies.  She was third generation Chinese American, born in Los Angeles, her Chinese name meant Frosted Yellow Willow.  Chinatown sometimes subbed for real China in early films, and Chinese extras were needed for verisimilitude.  Anna May got permission from her parents to be an extra when she was a student, and then dropped out of high school and was cast as Madam Butterfly in an early two color Technicolor film, The Toll of the Sea.  This led to her being cast in Douglas Fairbanks superproduction, The Thief of Bagdad.  A victim or a temptress were often the roles she played (or both at the same time) but fan magazines printed her portrait and celebrated her beauty, if, in a condescending way, certainly with more respect than other non-white performers received.   In Europe she had more freedom, and better roles, it was here that she had met Dietrich, and Leni Reifenstahl,  and in England starred in perhaps her best film, Picadilly.  “Wong’s role in Express was, in many ways, a classic person-of-color best-friend role — only this best friend had an amazing resting bitchface and a gaze that could shut a man up with a single glance. Her true feat, of course, was getting people to look at something, anything, that wasn’t Dietrich’s intoxicating face for more than a minute. Plus, under the direction of Josef Sternberg, she got the most awesome German expressionist lighting of her life. Just look at her and Marlene. This is majesty” (Buzzfeed) It made no difference as far as most Hollywood casting was concerned.  She would continue to be cast as a Dragon Lady type, and white actresses would play leading roles (like Olan in The Good Earth) in “yellow-face.”

Pre-code.com adds: “The way the two women are connected together in temporary but complicit friendship is as uncanny of a commentary as the subtle digs at white egotism. When a woman lowers her status, her agency is removed. You can justify any of your actions towards a woman– from mistrust to rape– if you see her as free and easy. They’re shameful, antiquated feelings, built alongside the bigotry that led Europeans to create the then-disastrous, murderous Chinese state of colonial fiefdoms. Only respect and understanding can save anyone from their own awful attitudes.” 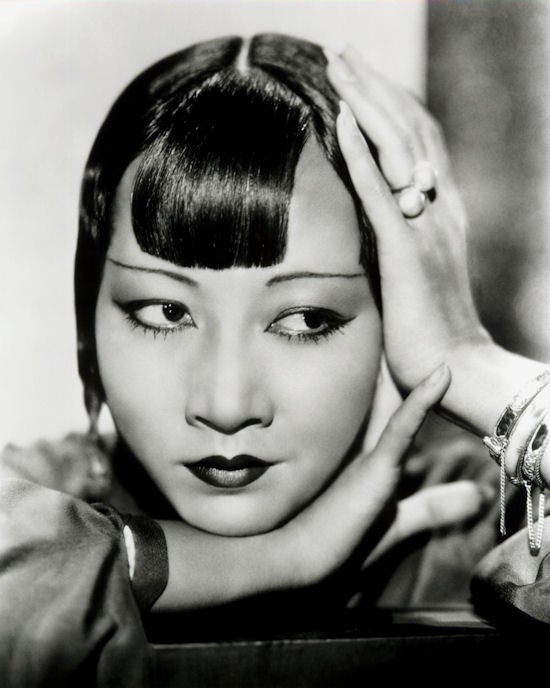 While giving Wong her best role in American talkies, Shanghai Express also stars Warner Oland as a “Eurasian” warlord.  Johan Ohlund was born in Sweden, and immigrated to the US with his parents when he was a young teen.  He Americanized his name when he began working as a stage actor in New York in the earliest years of the 20th century.  In Hollywood, after playing Al Jolson’s Orthodox Jewish father in The Jazz Singer, he became typecast as Asian characters, particularly detective Charlie Chan.  Chan was a fictional detective created by Earl Derr Biggers, but he was based on a real detective, Honolulu sleuth Chang Apana. “I owe my Chinese appearance to the Mongol invasion” Oland once said, referring to a Russian grandmother (Huang 201).  He claimed he didn’t need elaborate make-up, he simply combed his moustache down and his eyebrows up.  He started playing Charlie Chan in 1931, and became, after Shirley Temple, Fox’s most valuable property, making 16 Charlie Chan movies in six years.  Oland was an alcoholic with the attendant health problems.  He walked off the set of a Chan movie in 1938, returned to Sweden, and died there, at the age of 57 in 1938.  I wish I could say that this kind of ethnic impersonation was entirely a thing of the past, but this issue has occurred as recently as 2017, when there was a controversy about white actresses being cast as Asian characters.

Clive Brook is a rather stolid on screen personality, even though he was considered to be a matinee idol in his day. He acted in Hollywood films, starting in 1920, in silents opposite such stars as Clara Bow, in Hula, and talkies such as in Tarnished Lady with Talullah Bankhead.  His buttoned-up screen image created a contrast with his more sensual leading ladies.  He also played Sherlock Holmes on screen. We showed a pet project of his, On Approval a while ago. One catty researcher claimed he was even more stiff than usual in this film, thanks to a recent face lift.  Even though Dietrich’s character was unabashedly a prostitute, the film does not urge her to reform to please her stuffy ex.  “The movie is not about her becoming worthy of him, but about the journey of faith that allows him to become worthy of her.  Shanghai Lily doesn’t need to change.  Her boyfriend needs a new attitude” (LaSalle 90). 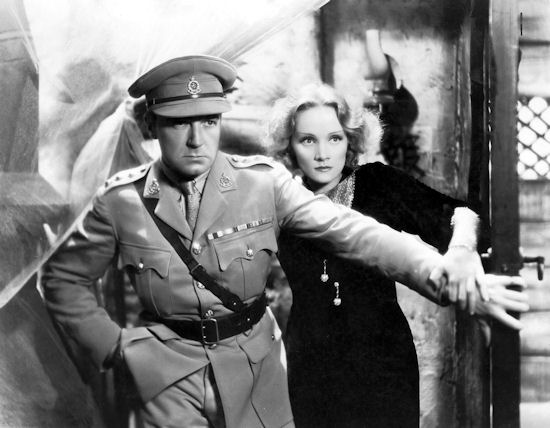 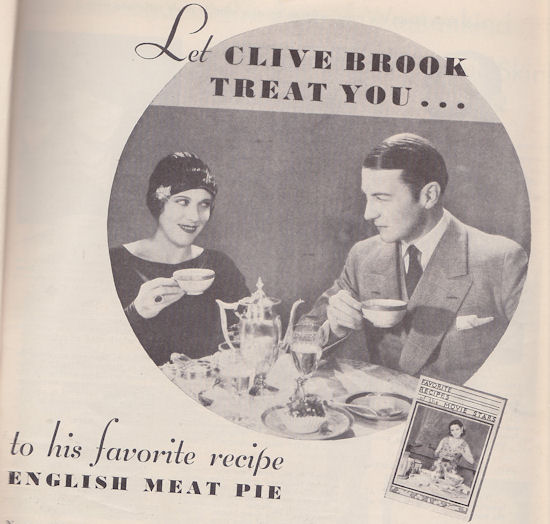 The government of China protested the country’s depiction in the film, its citizens homicidal and immoral, but China had more pressing political concerns than a Hollywood film.  Certainly we would classify this film as “Orientalism” a China that exists completely in the fevered imagination of the director, who had never been there.

Lee Garmes’ cinematography would win an Oscar, although Shanghai Express lost for Best Picture and Best Director. It was the most successful of all the von Sternberg/Dietrich films, in fact the top grossing film of 1932. 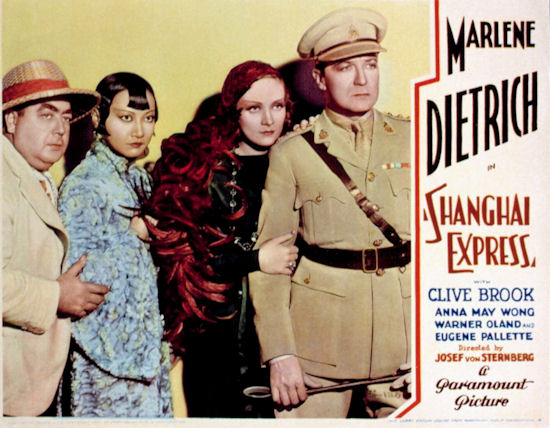 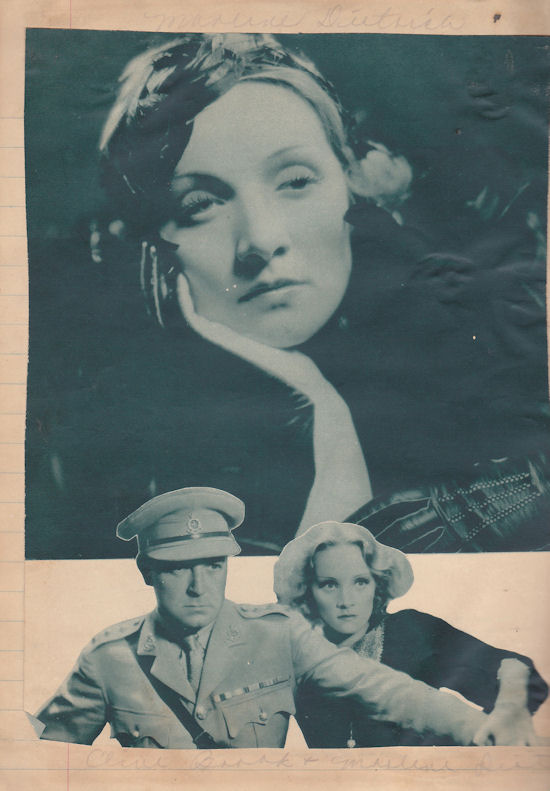 Often the films that are valorized in film history do not appear in movie star scrapbooks of the day. Shanghai Express is an exception.