A day-dreaming projectionist falls asleep on the job and magically walks into the detective thriller on-screen. Keaton’s surreal gag-filled masterpiece melds state-of-of the art technology, thrilling stunts and vaudeville hi-jinks. This peerless film revels in both the cinematic medium and Keaton’s extraordinary acrobatic skills. Live music by Maestro David Drazin. Shown with perfection itself: the Keaton short “One Week.”

Buster Keaton was born into his family’s rough-house vaudeville comedy act. Buster’s role was as “human mop.” His father tossed him around the stage, and the youngest Keaton’s ability to take any fall, or “buster” without harm made the act a huge success. He never attended school and spent his youth evading the social services that sought to separate him from his performing career. After the Five Keatons broke up, partly as a result of his father’s alcoholism, a chance encounter on a New York City street and a day of improvising on the set of a Fatty Arbuckle 2-reel comedy changed his life. He was smitten with the movies. Keaton and Arbuckle made 15 short comedies between 1917 and 1920; Keaton increasingly shared the director’s chores with Arbuckle, at the time one of the movies top comedy stars. Offered his own studio by producer Joseph Schenck, Keaton embarked on a decade of 2-reel and feature comedies unmatched for their uniquely audacious and elegantly surreal humor. Walter Kerr said of his debut film in The Silent Clowns, “But from the very first film Keaton released as a star, once his association with Arbuckle was ended, was breath-takingly, an explosion of style. To sit through dozens and dozens of short comedies of the period and then to come upon “One Week” is to see the one thing no man ever sees: a garden at the moment of blooming.”

Sherlock, Jr., showcases Keaton at the height of his creative powers. It is, quite simply, a film about film, one of the first. It synthesizes two halves of his personality, his stage-trained, vaudeville roots, and his love for the technical side of movie making. He was fascinated by the world of illusion, as represented by the stage and film, and its contrast with the “real” world. Some sequences are carefully constructed to show you how a magician’s trick is accomplished, and even with a cutaway set, and a visual explanation, sometimes you can’t believe what you are seeing! 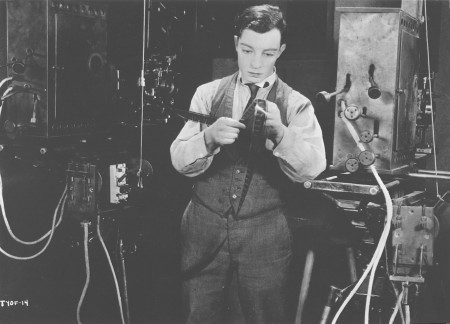 On display, as always, is his extraordinary athletic ability. He does all his own stunts, which was true throughout his silent career, with one exception (a pole vault in College). He doubled his other actors, too. It is Keaton who falls off the motorcycle as the cop, and then is seen again riding on the handlebars. He made sure that you can clearly see that it is the star risking life and limb, and in fact, he was badly injured during the making of this film. During one scene he runs across the tops of several railroad cars, and grabs onto a waterspout which was supposed to lower him gently to the ground. The gush of water was unexpectedly strong and it slammed him onto the track and he fainted. His cameraman kept cranking, though, because no scene was finished until Buster said “cut.” He had blinding headaches for months afterwards, but it didn’t stop him from working. It was only many years later that during a physical a doctor asked him when he broke his neck, and he thought back to the accident during Sherlock, Jr.

And, remember that there were no laboratory special effects. Every trick was done in the camera, by the use of precise measurements using surveyors’ instruments, special lighting and double exposure. Supposedly, Hollywood cameramen and directors watched this film over and over, vainly trying to deconstruct Keaton’s methods. These films were entirely Buster’s. He sometimes had a nominal director, and a team of gag writers, but he was the central creative force, the star both in front of and behind the camera. He was an inveterate tinkerer, too. In “One Week” the short that begins this program, he may even have constructed the house that is the main prop for the film. It was, in fact, topical humor, a parody of a Ford Motor Company documentary about pre-fabricated housing called “Home Made.” He built many of the props for his films until an accident with a moving staircase on one of his short films resulted in the studio insisting that he hire a technical director. He relied on his creative team, photographer Elgin Lessley, technical director Fred Gabourie, and a cast of regular actors, including his father, Joe Keaton, who plays the father of his girlfriend in Sherlock, Jr.

As brilliant as Sherlock, Jr. appears today, its central concept not appropriated again until Woody Allen used the plot device in The Purple Rose of Cairo in 1985. Keaton’s film was not well received in 1924: it was truly a film ahead of its time. 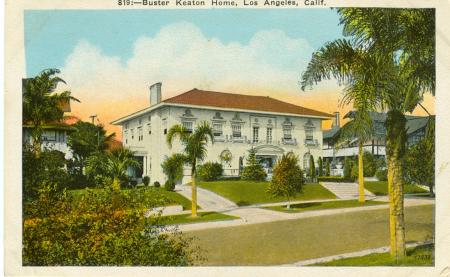 In the 20s, Keaton was not as popular as his colleagues Charlie Chaplin and Harold Lloyd. But, his films have eclipsed his rivals in current popularity. As early as the 1950s, James Agee wrote in Life magazine, “He was the only major comedian who kept sentiment almost entirely out of his work, and he brought pure physical comedy to its greatest heights. Beneath his lack of emotion he was also unstintingly sardonic; deep below that, giving a disturbing tension and grandeur to the foolishness, for those who sensed it, there was in his comedy a freezing whisper not of pathos but of melancholia.” 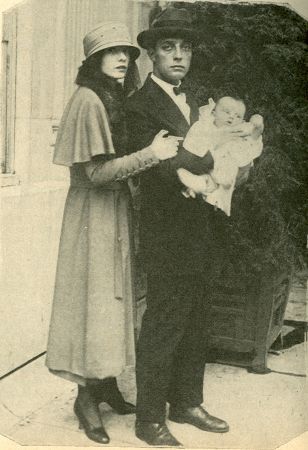 From the January, 1923 Motion Picture Magazine: Baby Joseph has arrived in New York with his father and mother. This is the first time Buster Keaton and Natalie Talmadge Keaton have been in New York since their marriage. Note the fist the young heir shakes at the photographer.

More Keaton on Moviediva, The General and Out West.

Those interested in Buster Keaton should visit the official fan club website of the Damfinos, at www.busterkeaton.com.

David Drazin, who played for the February 4, 2005 showing at the North Carolina Museum of Art, is a pianist and jazz archivist living in Chicago. His regular gig is with the Gene Siskel Center at the Art Institute of Chicago, but he has played in venues all over the country, and for the last two years was invited to play at the world’s most prestigious silent film festival at Podenone, Italy. In a 2005 review of David’s music for a retrospective of Yasujiro Ozu’s silent films, Chicago’s second most famous film critic, Jonathan Rosenbaum of the Chicago Reader, said, “the accompaniments of David Drazin alone are worth the price of admission.” Here is the link to the David Drazin website.