The silent movie business looks back at itself and laughs in King Vidor’s Show People. Bubbly Peggy Pepper, fresh from Savannah, Georgia, arrives in Hollywood, ready to be a star. She travels from slapstick to high drama, and, reinvented as haughty Patricia Pepoire, must find herself and her true love in the coils of fame.

King Vidor’s career was a long one, stretching from the ‘teens to Duel in the Sun and The Fountainhead in the 1950s. The late 1920s was a time of extraordinary creativity for him, in a few short years, among others, he directed the first film to deal realistically with the doughboy’s experience in WWI, The Big Parade, (and made John Gilbert a huge star) brought a distinct style of naturalism to the screen with The Crowd, and made a comedy, Show People, that represents the best of its stars, Marion Davies and William Haines.

Davies was, of course, famously the mistress of millionaire William Randolph Hearst. Although well-known privately for her sense of humor, WR was convinced she was shown to best advantage in a series of starchy costume films that he financed for her at MGM under the Cosmopolitan Pictures imprimatur. Vidor had the idea of a satire of the movie industry, loosely basing his script on the career of Gloria Swanson. He collaborated with Laurence Stallings, the author of What Price Glory?, as well as The Big Parade. Swanson had started in slapstick shorts at Mack Sennett’s studio and later became a great star in the opulent sex comedies of Cecil B. DeMille, eventually marrying into minor French nobility. WR hated the idea, and refused to let Marion star, until Vidor realized his main objection was that he would not allow her to be hit in the face by a custard pie. When the script substituted a stream of seltzer water, Hearst gave his approval. 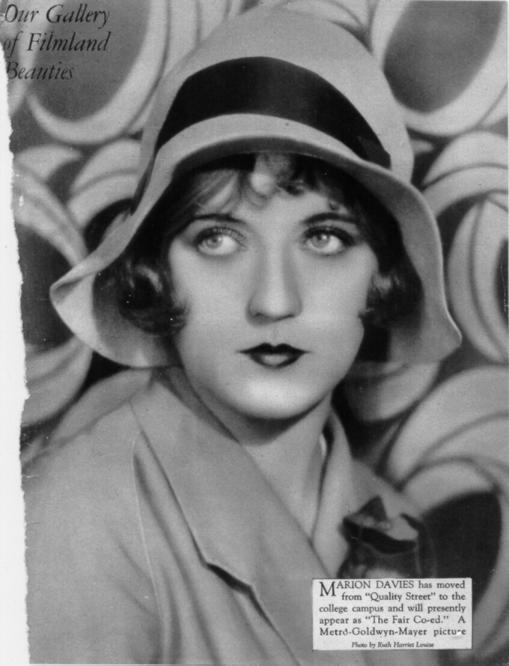 William Haines was a bigger star at the time than Davies, and he appeared in the film partly to boost her career. She was one of his best friends, and he was a frequent guest at San Simeon, part of the “younger degeneration” of revelers Marion enjoyed inviting to “The Ranch” for visits that sometimes stretched into months. Haines had hit it big at the beginning of 1926 with Brown of Harvard, the first of a series of college films that elevated him into the top rank of box office stars. The characters he played in these films were brash to the point of obnoxiousness, and Billy Boone in Show People was a departure for him; Vidor was his best director, and for him he gave his most sensitive performance. 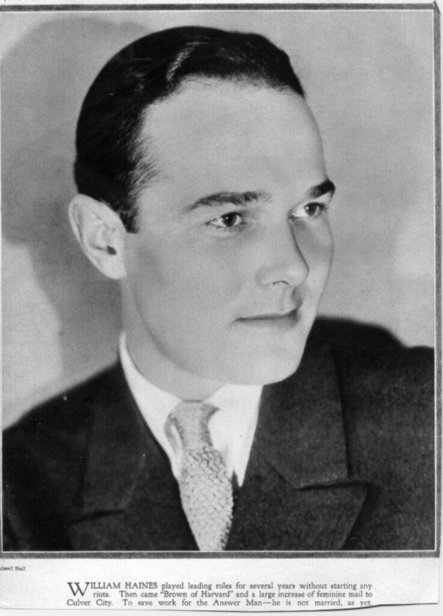 William Haines played leading roles for several years without staring any riots. Then came Brown of Harvard and a large increase of feminine mail to Culver City. To save work for the Answer Man–he is not married as yet. 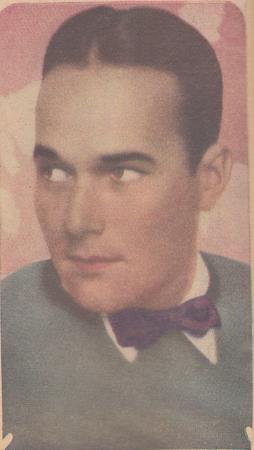 Hearst approved heartily of his casting, because he was insanely jealous of Marion, and Haines was openly gay. Spies were always posted on Marion’s sets for romantic scenes, but with Haines, WR felt this precaution unnecessary. In the freewheeling Hollywood of the 1920s, Haines lived his life as he pleased. MGM covered any indiscretions, such as when he was arrested with another of his partying girlfriends, Constance Talmadge, at a speakeasy that had a gay clientele. When the Production Code came in 1934, changing both what was seen on the screen and attempting to mandate the stars private behavior, Louis B. Mayer gave Haines an ultimatum: either get married and put yourself outside the reach of the gossip columns, or you’re fired. Haines replied, “I’m already married,” and told L.B. to tear up his contract. Haines became a successful decorator, numbering among his clients many film people, but also the likes of Nancy Reagan, and the US Ambassador to Great Britain. He and his partner, Jimmie Shields, were together from 1926 until Haines’ death, nearly 50 years later. (Mayer took a savage dislike to actors who chafed under his need for ultimate control, and if you got on his bad side, he could and would destroy your career. Other victims included John Gilbert and Buster Keaton).

William Mann’s biography of Haines, Wisecracker, is a marvelously researched biography that presents a vivid portrait of 1920s Hollywood and is a virtual Rosetta stone of gay Hollywood, allowing the interpretation of the photo below: 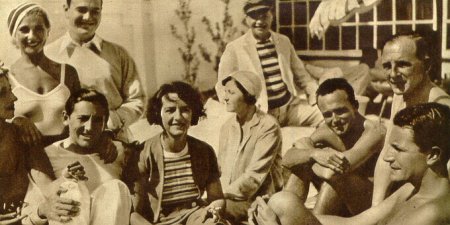 (Edmund Lowe and Lilyan Tashman were moderately famous stars of the early 30s, gay, and married as a publicity subterfuge. They gave lavish parties with guest lists largely drawn from the gay and Lesbian artistic circles of Broadway and Hollywood. Here you see Haines and Shields, as well as Tashman and Ivor Novello, a gay matinee idol of the British stage, who starred in Alfred Hitchcock’s silent The Lodger. It’s amazing to think of these party photos being published in a movie magazine, opaque to the average movie goer, but completely transparent to those with the knowledge to decode the scene.)

The print of Show People shown on Turner Classic Movies has the score that was originally released with it in 1928 and is heavily flavored by popular songs of the day, the titles often making a comment on the action, (“You’d be surprised,” etc.).  There is also a theme song, “Crossroads” written for the film, and used under the titles, and at a key moment in the action.  This film came out during the turbulent transition to talkies. Many in Hollywood thought no one actually wanted to hear the actors speak, and a music track added at the studio would be the only change in the way pictures were released. This, of course, would change shortly; Haines’ next film was shot silent and then reshot with dialogue. Kevin Brownlow did a restoration of Show People that adds a composed score by the superb Carl Davis and a brief scene of Billy Boone showing Peggy Pepper how to put on movie make-up (which is quite sweet; I miss it in the TCM version). 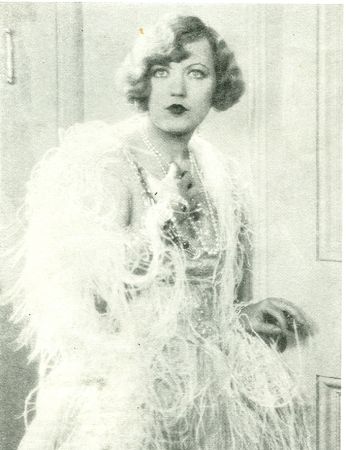 This $800 dress, worn by Marion Davies in “Show People” was ruined by seltzer water–deliberately and as part of the plot–in a comedy scene. The gown was made by Greer.

Show People is both funny and touching, full of inside jokes as well as an insider’s peek into Hollywood at the end of the silent era. 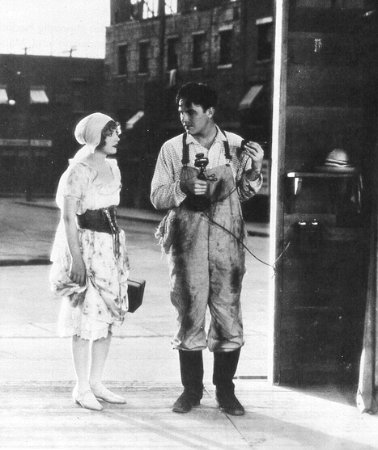 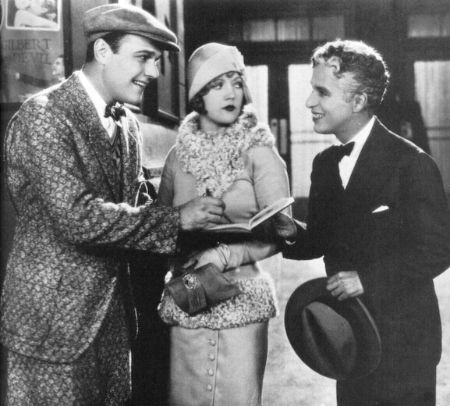 (Portrait photos from an anonymous collection of film star clippings c. 1927, party photo from October, 1931 issue of The New Movie Magazine, production stills from King Vidor by John Baxter, Marion in her $800 dress from the July, 1928 Photoplay Magazine).