As Wall Street to the eighties, or The Big Short, Margin Call or any tale of financial chicanery, Skyscraper Souls fuses male ego, money and power. David Dwight is the master of a phallic symbol even bigger than the Empire State Building (just completed in 1931) as seasonal views of an atmospheric matte painting remind us. Below his penthouse-dwelling feet the lives of the humble and the great unfurl. Women work, but it’s sex that seems to be their true vocation, whether they are dedicated executive secretaries, lowly stenographers, dress fitting models or restless wives. 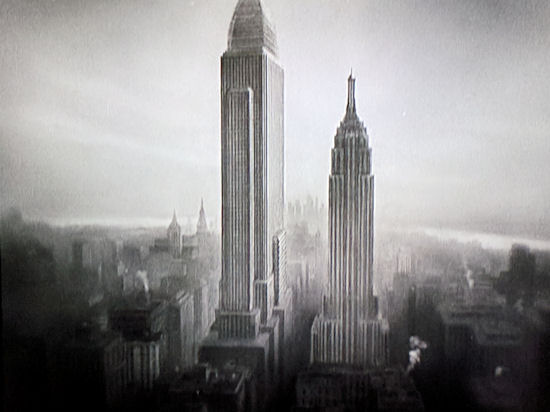 My building is bigger than your building.

The film was based on Faith Baldwin’s 1931 novel Skyscraper. She was a popular novelist of the day who often dealt with stories of women navigating their professional and personal lives in books and magazine serials like The Office Wife and Wife vs. Secretary, also made into films. Movies are often guilty of simplifying complex books, but in this case, the opposite is true. Skyscraper is a standard love triangle, with successful David Dwight seemingly modeled on Adolphe Menjou, unlike the tall, suave Warren William, who plays him in the film. Almost all the intertwined subplots were devised for Skyscraper Souls, with just wisps of them in the book, giving the impression that the movies were far more sophisticated than even the acme of popular fiction. In the book, administrative assistant Sarah (Verree Teasdale) is lamenting a transgression of her youth, not having a current affair with Dwight. Jennie (Anita Page) becomes the mistress of a buyer, and then disappears with him, the wages of sin in this case being exile to Evanston IL. The film allows her a conventional happy ending. Most apparent is the linking of all the plots much more strongly to the magnificent Seacoast Building. In the novel, Dwight is a lawyer, who neither lives nor works in the office tower. In Skyscraper, the Seacoast Building is 72 stories to the Empire State’s 102. In Skyscraper Souls, the tower has been heightened considerably. Dwight’s reign as a banking Zeus in the Seacoast heavens unifies these stories.

Clearly, MGM wanted this to be a vertical version of Grand Hotel. So much so that they seem to have reused a set: 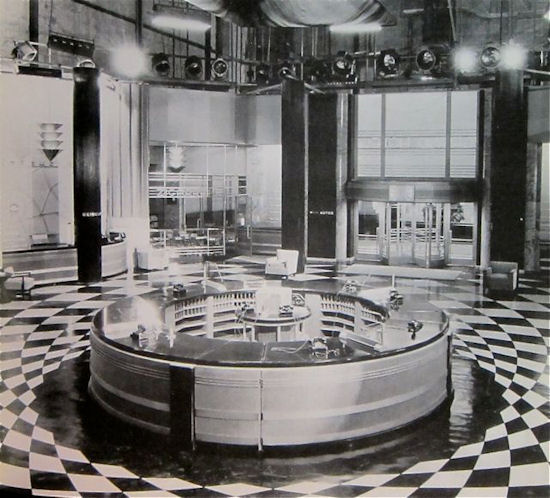 This is the lobby of the Grand Hotel. 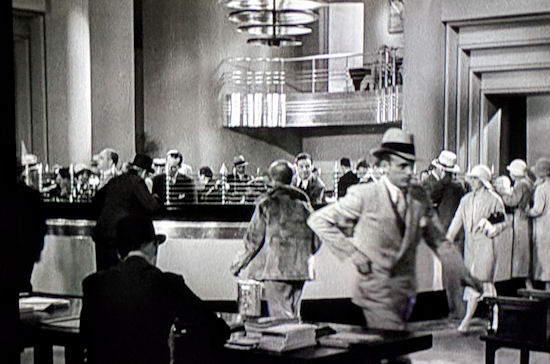 This is a round bank tellers’ station in the Dwight Building. You can’t see very well, but I’m sure it’s the same set. 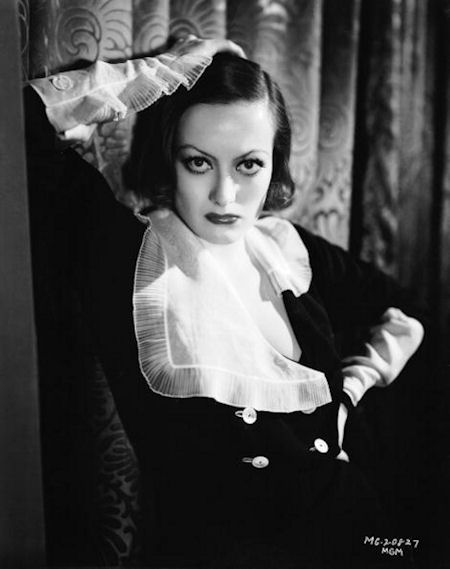 Here is Joan Crawford in Grand Hotel, in a gown by Adrian. 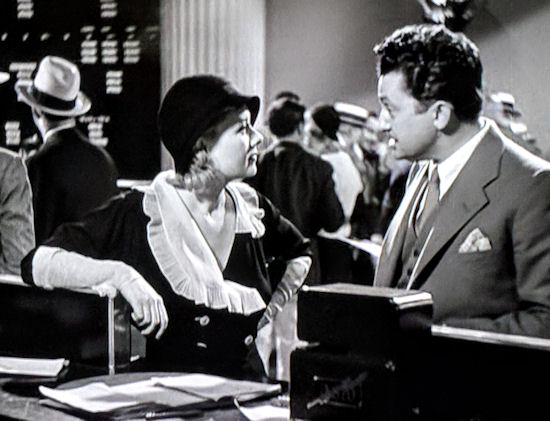 Here is Anita Page in the same dress, which is appropriate, since her character is very similar to the one Joan plays in the other film.

Tender morsel Maureen O’Sullivan is wooed by one of those obnoxious, dunderheaded mashers who populate Depression-era films. There is something decidedly creepy about Norman Foster’s relentless pursuit of her, and he is quick to sense any imagined infidelity, perhaps because his own randy nature is so indiscriminate. He accuses pretty Lynn of being on a “hair-trigger” but it’s wishful thinking on his part. Why does she find him attractive? He’s so awful! Run, Lynn, run!

To a modern reader, the most striking impression of Skyscraper is how many bad decisions are made on the basis of sexual frustration. Lynn and Tom, get all hot and bothered necking, but never even consider having sex. They explode in arguments about whether Lynn is going to continue working after they are married (she likes her job) and whether she is paying too much attention to Dwight. But, since they are serious about each other, and engaged, it seems like if she would just sleep with him, it would take a lot of pressure off. But, doing so would make her a fallen woman, and Tom would lose respect for her, even if the person she was sleeping with was him. The convoluted logic of this mystifies a modern viewer. David Dwight is “bad” and Tom is “good.” But there is not that much difference in their predatory behavior. 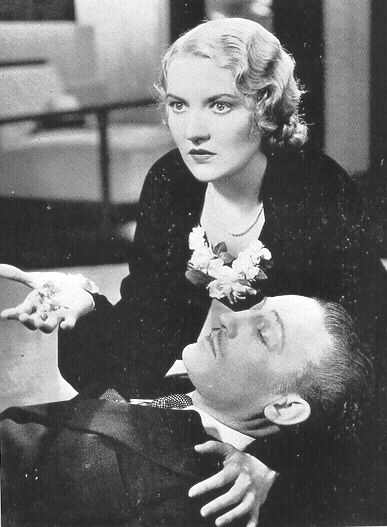 “Is this to be the climax of a great lawyer’s career?” 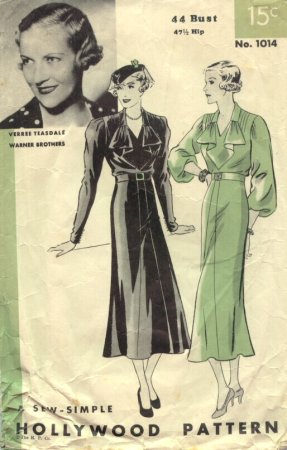 The film of Skyscraper Souls, unlike the book, is full of sex. Most of it is furtive, occasionally satisfying, often inspired by money rather than passion. Lynn’s seduction (or near seduction) by Dwight is decidedly rape territory. But, he’s at least polite (if thoroughly untrustworthy) unlike her horrible boyfriend, who assaults her in a much less polished manner (isn’t there a third choice?).

Verree Teasdale is a much more appealing character, a career woman who is the devoted mistress of the boss, even though he lies smoothly to her about his wife’s refusal to get a divorce. She looked older than she was (she’s 30 in this film), so often played other women and sniffy society matrons. She was a Broadway actress, who made her first film in 1929. A second cousin of Edith Wharton, she married Adolph Menjou, and they remained married until his death.

Maureen O’ Sullivan came to MGM as a contract player in 1932 after a few films at Fox. She’s just 21 years old here, She was born in Ireland, and came to the US in 1929 with a Fox movie deal. She said in an interview that she felt as if she had spent her first and last days on the MGM lot in costume as Tarzan’s Jane, making Skyscraper Souls just after Tarzan the Ape Man. She insisted Jane’s costume wasn’t immodest, and she certainly spent enough time onscreen in her lingerie in the early 30s to know. She changes clothes in her Seacoast Building office, and even in Payment Deferred her gratuitous scanties are the only sexual interest in a film dominated by Charles Laughton’s bravura performance. She went on to play ingenues in some big MGM pictures, like The Thin Man and A Day at the Races. There is no costume designer credited for Skyscraper Souls, and there is no dumpier evening gown in any 30s film than the one O’Sullivan wears in her big scenes. Obviously, Adrian was busy elsewhere, although one of his dresses for Joan Crawford in Grand Hotel shows up fleetingly on Anita Page. I’m guessing this film may have been costumed by Dolly Tree, but I have no evidence to support that guess. 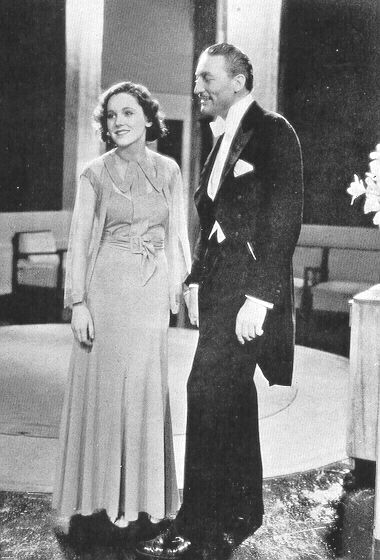 “Lynn is flattered by the attentions of David Dwight, the brilliant lawyer.”

Warren William is a marvelous addition to any Pre-Code cast. Mark Viera says in Sin in Soft Focus he “came out of nowhere and quickly became the house seducer, exerting his oleaginous charms in Under Eighteen, Beauty and the Boss, The Dark Horse and The Match King.” (Moviediva Jr, used to call him The Match King, since that is the first movie in which she remembers him). His dark sexuality dominates Skyscraper Souls, and the Warner Brothers version, Employee’s Entrance. But, he’s quite good at light comedy, too, sparring romantically with Joan Blondell in films like Gold Diggers of 1933 and Goodbye Again. Later in the 30s he played detectives Philo Vance and Perry Mason (including The Case of the Curious Bride).

Norman Foster, who plays the hero (?) acted in about 50 films. But, he spent most of his career as a director, first doing Mr. Moto and Charlie Chan B pictures, but also Journey Into Fear with Orson Welles and Joseph Cotten and that film noir with the amazing title, Kiss the Blood Off My Hands. He also directed episodes of the Davy Crockett show on tv. His most recent acting credit, over 40 years after his death, is the recently released final film by Orson Welles, The Other Side of the Wind.

The head of the jewelry firm who carries a torch for Anita Page is Jean Hersholt. He’s a Danish actor with a long career in the movies ranging from one of the two lead actors in Erich von Stroheim’s Greed to Shirley Temple’s grandfather in Heidi. He was deeply involved with various charitable causes; he was the President of the Motion Picture Relief Fund which supported actors down on their luck, and was also involved with the Motion Picture County Home and Hospital to which actors could retire and find care in their old age. The Jean Hersholt Humanitarian Award, which is given annually at the Oscars, is named for him.

The fictional Seacoast Building was built, as were many real NYC skyscrapers, as a speculative venture for rental to a variety of tenants. All the components of a small town were contained vertically within its walls. The stock manipulations that enable David Dwight to gain control of the building from its investors mirror the disastrous finagling that brought on the Crash of 1929. James Sanders points out in Celluloid Skyline that many familiar landmarks were similar speculations “–the Empire State and Chrysler Building, the needle-like spires of lower Manhattan–permanent additions to the city’s topography, already assuming their enduring place as perhaps the most distinctively ‘New York’ buildings ever produced. It is a fascinating paradox. How and why did these towers, built in a frenzied moment, the very emblems of paper prosperity and the fast dollar turn out to be some of the city’s most stylish and well-made buildings, the very essence of its imaginative spirit?” And, of course he answers his own question by observing it was then good business to make a daring, beautiful skyscraper.

“Monday releases some spring, animating the routined gestures of men and women. Monday begins the workers’ week, and the Seacoast Building opens its doors of green bronze set in black marble and invites them within, to struggle, to attain, to fail, to succeed, to love and to hope, to laugh and to weep, to suffer and rejoice, to envy and wound, to hate and to pity. In short, to work for their existence.” –Faith Baldwin 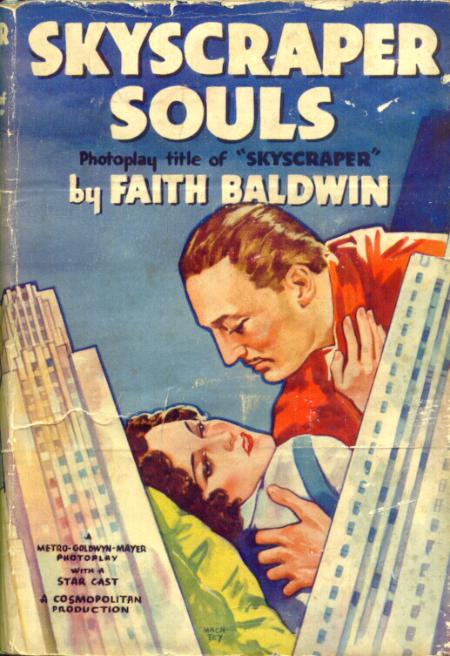 (Pictures from the Photoplay Edition of Skyscraper Souls. Sources include Celluloid Skyline by James Sanders www.celluloidskyline.com)