A Sutton Place socialite wakes up in a train compartment and doesn’t know where she is.  Is she crazy, or is it something more sinister?  A top notch supporting cast includes Keye Luke as the hero’s Chinese best friend and Hazel Brooks as one of the sluttiest bad girls ever.  UCLA Archive Print.

A rediscovery of the UCLA Festival of Preservation, Sleep My Love was directed by Douglas Sirk, known for his overheated 1950s Technicolor melodramas, like All That Heaven Allows, Magnificent Obsession and Written on the Wind.  Hans Detlef Sierck was born in Hamburg, Germany.  He became an important theater director during the 1920s; he was a colleague of Kurt Weill and Berthold Brecht.  In 1934, he switched to film directing, since the Nazis, at the time, had less interest in the movies, because they were primarily for export.  He had a son with his first wife, who became a Nazi.  She barred him from seeing his child, since his second wife was Jewish.  His son, Klaus, joined the Hitler youth, and then became the preeminent child star in Nazi cinema.  The only way his father ever saw him again was on screen.  His second wife left for the US in 1936, and her husband joined her a year later. In 1937, he came to Hollywood, where in spite of his success in German cinema, he was unknown, and was assigned to B pictures, thrillers and melodramas. He managed to transform this genre material through his deep knowledge of the construction of theatrical classics, his profound insights into human behavior, his exceptional camera eye.

According to Jon Halliday, who interviewed Sirk extensively in the 1970s, “I think his interest in ambiguity was accentuated by the fact that many of his close friends and colleagues became Nazis; the difficulty of trusting people—i.e.of being convinced that one knows who someone else really is and how they will behave under intense pressure,–became a dominant factor in Sirk’s life” (Halliday 4). This film is an apt example of this tension of trust and betrayal.

The script was adapted by Leo Rosten from his own story.  He was “a witty guy” according to the director (Halliday 85) Although a successful screenwriter, his greatest claim to fame was as a Yiddish lexicographer as the author of The Joys of Yiddish.

The film’s star, Claudette Colbert, made her mark as the heroine of frothy comedies, winning an Oscar for It Happened One Night.  She was born in Paris, but moved to New York City as a girl.  She ended up on stage by chance, but became a successful Broadway star, and would have stayed there had the Depression, and talking pictures, not made a movie career more financially attractive. Her first big hits were a couple of sexy historical spectacles directed by Cecil B. DeMille, Sign of the Cross and Cleopatra.  She was not anxious to make It Happened One Night, but when it won all five major Oscars, she changed her mind. She glittered in a wonderful series of comedies throughout the 30s and 40s like Midnight and Palm Beach Story, as well as dramatic roles in films like Imitation of Life, and Since You Went Away.  Her New York sophistication with a European gloss (and her age, she’s in her early 40s here) made her a perfect choice for the Sutton Place wife of Sleep My Love. 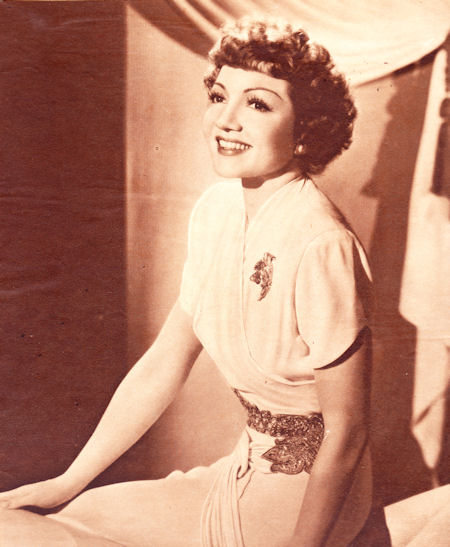 This is a 1940s scapbook photo of Miss Colbert. No more cheesecake at her age.

Don Ameche’s parents were Italian, but he was born in Kenosha WI.  His father intended for him to be a lawyer, but in college he was attracted to the stage. His first success in show business was on the radio, where he appeared on many dramatic shows, and was the host of The Chase and Sanborn Hour, which starred ventriloquist Edgar Bergen and his dummy, Charlie McCarthy.  Ameche became one of 20th Century Fox’s biggest male stars, especially in musicals, in which often starred either Alice Faye, Betty Grable or Carmen Miranda. For a long time his greatest claim to fame was inventing the telephone in the title role of The Story of Alexander Graham Bell.  His name briefly became slang for the telephone, “call me on the Ameche” you hear occasionally in 1940s movies.  In the 1980s, his career was briefly revived in films like Cocoon and Trading Places. 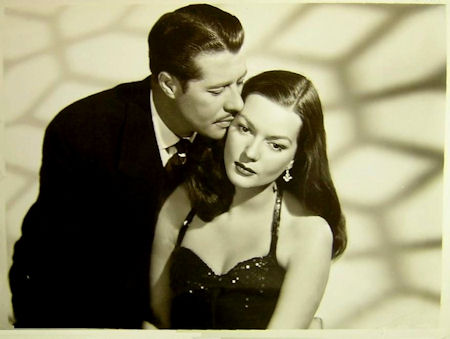 Robert Cummings was born in Joplin, Missouri. In high school, he was taught to fly by his godfather, Orville Wright. He snagged his first Broadway role by pretending to be an Englishman, and his first movie role by pretending to be a Texan. He specialized in light romantic comedies, although he played dramatic roles in films like two directed by Alfred Hitchcock, Saboteur and Dial M for Murder. In the late 1950s , he starred as a womanizing photographer on a self-titled sitcom, known in reruns as Love That Bob. He was a health food advocate; he ascribed his youthful looks to his sensible food choices and vitamin intake, publishing a book called How to Stay Young and Vital.

Hazel Brooks, who is startling in her greed and her negligee, was born in Cape Town, South Africa.  She was a fashion model and pin up model (for Alberto Vargas). Most of her decade’s worth of movie parts were uncredited.   After retiring from acting she became a photographer, herself. 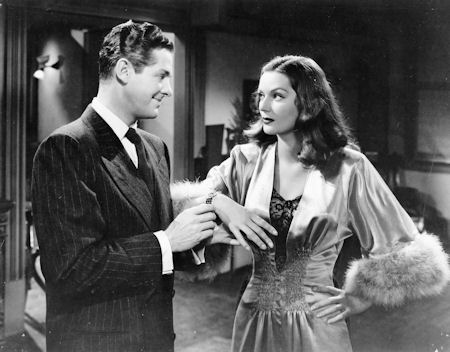 Sleep My Love is part of a cycle of films, of which Gaslight is the prime example, of women being menaced by people they trust in their own homes.  The upper class mansion is in midtown, on Sutton Place (59th Street at the East River).  The husband’s mistress lives downtown, by the El tracks, and she wants everything that his wife already has.  Don Ameche offers her a diamond bracelet.  “These two conspirators meet in a dark and dingy dive, and Ameche presents Brooks with the bracelet in a desperate attempt to placate her.  Slowly she turns the bracelet over and over on her wrist.  She assesses it.  It sparkles and winks.  She thinks about it.  It speaks of glamour and wealth.  It’s not bad, not bad at all, but ‘I want the house.’ She knows true woman’s film value.  And that’s final” (Basinger 244).

As a lover of classic Hollywood films, their racist attitudes sometimes create embarrassing moments.  One thing that is amazing about this film, other than the cracking plot and excellent cast, is that, without comment, the hero’s best friend is Chinese American.  Keye Luke, himself Chinese American, had to play many stereotyped roles, from Charlie Chan’s #1 son, to Master Po on the Kung Fu tv show, to the “inscrutable” keeper of the Gizmo, in Gremlins.  But, in this film, he is just a pal, like any other, and the film stops in the middle so we can all go to his wedding.  Clearly, this was not just because Hollywood had seen the Error of Their Ways.  After all, Japanese Americans were currently being deported to internment camps.  But, China was an ally, and the film’s unexpected  appreciation of Asian culture is rather wonderful. It’s a symbol of all the warmth and humanity missing from the heroine’s stuffy mansion. The scenes were filmed in Los Angeles’ Chinatown. 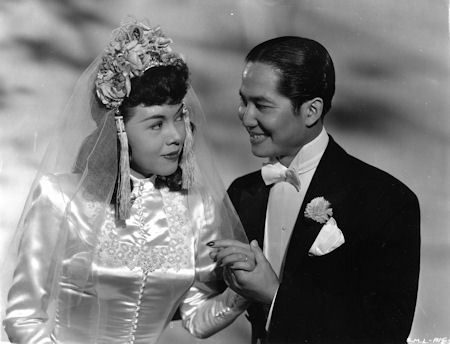 The film is a prime way to view the way a talented director shapes genre material to his world view.  In many of his later melodramas, affluent houses are psychologically threatening to their female inhabitants. The contrast between the restrictions of wealth, and the pleasures to be had in more modest circumstances are a recurring theme in Sirk’s career..

Sources include: Douglas Sirk by Michael Stern, Sirk on Sirk: Conversations with John Halliday, UCLA Festival of Preservation notes, Film Encyclopedia by Ephraim Katz, A Woman’s View: How Hollywood Spoke to Women 1930-1960 by Jeannine Basinger, “Claudette Colbert” by Joseph B. Pacheco Jr May 1970 Films in Review, “Don Ameche” by James C. Madden January 1972 Films in Review, The Great Movie Stars: The Golden Years by David Shipman, The Power of Glamour by Annette Tapert.