Miles Monroe, owner of The Happy Carrot Health Food Restaurant is wrapped in tinfoil after a botched ulcer operation in 1973 and cryogenically frozen, awakening 200 years later in a world that cares only for the orb, the telescreen and the orgasmatron. Groucho-esque interludes of satire savaging beauty pageants, totalitarian regimes, Blanche DuBois, family dinners, Volkswagons and deep fat alternate with slapstick sequences paying homage to Chaplin, Keaton, Lloyd and Laurel and Hardy.

We may know more about Woody Allen than we care to, as he tirelessly recycles his life into his art. A self-educated film nut, he began selling jokes to the many show-biz columnists in the New York newspapers when he was still in high school. He got a “D” in motion picture production just before flunking out of NYU. In order to impress the beatnik co-eds he was attracted to, he discovered he had to have some interests besides NY Giants baseball and magic tricks, and he’d have to read Faulkner and Fitzgerald instead of comic books (a love for Ingmar Bergman films came much more naturally). After a successful comedy writing career he became an even more successful stand-up comedian.

Sleeper is a transitional film, between those that are closer to Allen’s stand-up routines, and his more serious comedies. His original plan was quite grandiose, a 4 hour film in which the first half would portray Miles’ life in the 20th century. There would be a dinner break right after he went in for his surgery, and the second half would take place in the future. Obviously, only the second half of this story was made. The elaborate sets and props caused the film to run behind schedule and over budget; the final edit, condensing 35 hours of footage to just under 90 minutes, was finished two days before the opening. The film was made just as troops were being withdrawn from Viet Nam, and as the Watergate crisis was unfolding. (Nixon had not yet been implicated, so the Nixon joke is pure prophecy). When he remarks on the future totalitarian regime being “worse than California” note Reagan was then Governor. Albert Shanker as the feared “Leader” is a New York joke; Shanker was the much hated president of the NYC teacher’s union. There are clear references to then current SF films, too, to HAL in 2001, the firemen of Truffaut’s Fahrenheit 451 and even a Droog derby surfaces from Kubrick’s Clockwork Orange.

Luna is played by Diane Keaton, who met Allen when he cast her in Play It Again, Sam on Broadway. Their personal relationship was over before she appeared in any of his films. Luna reflects the stirrings of feminism’s second wave, as she evolves into a political and sexual revolutionary. At first shallow, she shares her middle-brow friends’ enthusiasm for the poetry of Rod McKuen and the paintings of the schlocky Walter Keane, perhaps the 70s version of Thomas Kincaid. (Hilariously, one academic misinterprets her remarks as being 1950s slang–keen–rather than the name of the artist– Keane. How quickly pop culture forgets!) Allen equates similar mindless pleasures with a California lifefestyle in subsequent films. 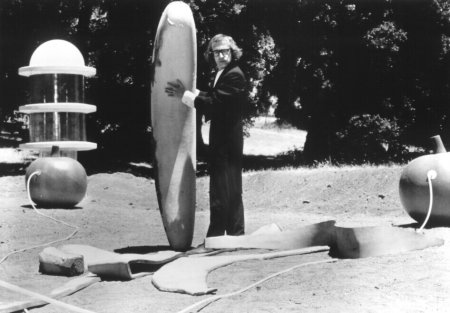 Miles Monroe is another of Allen’s messy, emotional Jewish characters in a sterile goyisha world. But, this clean, white, modernistic environment is particularly unwelcoming to him, and Allen is “scrawny, unheroic, physically unimpressive and unappealing to a greater degree than any of the earlier film comedians except Harry Langdon.” Gerald Mast goes on to say, “Allen is such a spectacular combination of post-Freudian complexes and insecurities that the very notion of heroism and its opposite has no place in his world at all. Although the comic world is always full of pain for the central clown, in no one else’s comedies is the pain so much the product of self-mortification.”

This film is full of physical comedy, which is not often associated with Allen. The slapstick interludes are underscored with New Orleans jazz standards played by the Preservation Hall Jazz Band, with Allen on clarinet. In his latest film, The Curse of the Jade Scorpion, he makes fun of his youthful agility, as he climbs stiffly down a ladder and hobbles across a roof in a slow motion escape. Sander H. Lee in Woody Allen’s Angst also sees a parallel to Hitchcock’s “innocent man accused” thrillers like The 39 Steps and North by Northwest. “Hitchcock equates the achievement of selfhood with the ability to successfully establish a romantic link with another person. Thus, these characters are placed in the position of convincing a woman, often while kidnapping her, that everyone else in the world is wrong, and that she should believe in him alone.”

Allen said rather modestly to Leonard Probst in Off Camera “Sleeper the script is not very funny, and I relied on myself to make it funny.” He told Leonard Maltin, “It’s exactly the kind of picture that I used to see as a kid, and love.”

During the making of Sleeper, film Editor Ralph Rosenblum telephoned producer Jack Grossberg to ask how the film was progressing. “Slowly.” This movie wouldn’t be like the previous ones. How so? Rosenblum asked. Grossberg replied: “The butterfly has come out, and he has red hair.”