Barbara Stanwyck spent half of 1932 down on the farm. The characters of Selina Peake and Joan Gordon are worlds apart, except in their fierce determination and survivor’s instinct, courtesy of their creator. You can see from the credits the two films have a lot in common. Both are directed by William A. Wellman, just a year (and in early Warner Brothers style, four pictures) off his white hot success making James Cagney a star in The Public Enemy. George Brent plays Stanwyck’s romantic interest in one, and her protege in the other. Hardie Albright plays her whining son in So Big, and a whining boyfriend in The Purchase Price. The plots are not dissimilar. But, one of them is a sprawling epic based on a popular novel, and the other, from a more obscure source, is concise and filled with wry humor.

So Big was based on the novel by Edna Ferber, about the spiritual and financial struggles of a farm wife. Ferber’s parents were Jewish shopkeepers who ran a general store in Kalamazoo, Michigan. Her mother took over the family business when her father began to go blind, setting an example for her daughter of a resourceful businesswoman. After stints as a reporter and as a successful short story writer, Ferber’s wrote a hugely popular novel, So Big, and won the Pulitzer Prize for Literature in 1925. Reviewers commented that the film’s brief running time was too short to encompass 60 years of Selina Peake’s life in a mere 80 minutes. I expected the novel to be enormous, but it is a compact 283 pages. The adaption, by J. Grubb Alexander and Robert Lord, is, in fact, a faithful rendition of the book, with one exception. For some inexplicable reason, the script omits the incident explaining how she manages to make a success of farming, creating the impression, as Jeanine Basinger writes, “a woman like Barbara Stanwyck can apparently go to market to sell her artichokes (sic) in So Big and come home an old woman.”

The second half of the film, with her cute baby boy So Big (Dickie Moore) grown into petulant Hardie Albright, seemed hasty and ill thought out, but the novel is the same way. There is a rush to make nervy Bette Davis into Selina’s youthful doppelganger, a role that Miss Davis did not relish. But the first half of the film is quite effective, as Selina grows up under the wing of her gentle, but disreputable gambling father (“‘The more kinds of people you see, and the more things you do, and the more things that happen to you, the richer you are. Even if they’re not pleasant things. That’s living. Remember, no matter what happens, good or bad, it’s just so much’–he used the gambler’s term, unconsciously–‘just so much velvet.'”) After his death, she is sent off to teach school in High Prairie, 10 miles outside of Chicago, but Timbuktu, as far as both the city and country folk are concerned. She befriends a sensitive farm boy at the house where she boards, and then impulsively marries a shy farmer. She’s shocked to find herself at 4:00 am the morning after her wedding a working (slaving) wife. In Ferber’s novel, it’s clear Selina is sexually attracted to farmer Pervus DeJong, a fact negated by the casting of clunky, morose Earle Foxe in the film. 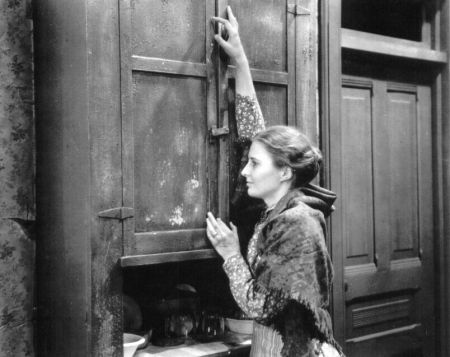 There’s never going to be any time to paint that kitchen cabinet.

Frank T. Thompson writes, “So Big probably would have fared better at a studio like MGM at this time, a studio that wouldn’t have been ashamed to give it the style, flourish and finish that would elevate it to superior soap opera.” But, the plain Warners’ style suits the story. Greta Garbo, in a similar situation in Susan Lennox, Her Fall and Rise, luxuriates in the lushly shadowy photography, nearly erasing the misery of her situation. And, sadly, Hollywood continues to believe donning old age make-up to be Acting with a capital A. Stanwyck was praised for her emotional range in this film, but the grey hair and wrinkles seem false. I didn’t believe a similar transformation in A Beautiful Mind either.

The Purchase Price opens with Stanwyck singing a torch song (in her own husky voice) begging someone to take her away. She’s wearing a dramatic gown with narrow beaded panels that Orry Kelly appears to have recut from a Baby Face dress she had worn only a few months before. In a goofy ply twist, she takes it on the lam to Elk’s Crossing ND to get away from her genial but pushy racketeer boyfriend, played by Lyle Talbot with his usual lack of sex appeal. Swapping places with a girl about to ship out as a mail order bride, she finds herself in short order married to a sniffle-wracked George Brent, who’s been waiting for a wife for so long, he expects to go to bed with her RIGHT AWAY. Taken aback (but clearly no better than she should be) Barbara wallops him, which makes him pretty darn mad. It will take the rest of the movie for them to see eye to eye. 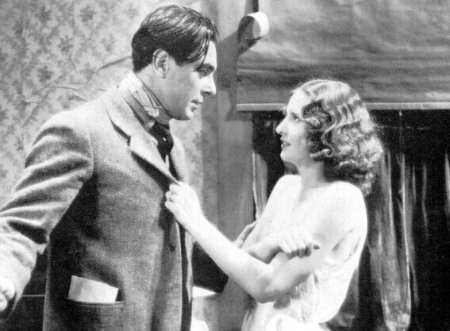 Wellman takes a lot of pleasure in staging the raucous shivaree that welcomes the newlyweds to the prairie. He even worked some comic business for twenties slapstick comic Snub Pollard, unbilled and hard to spot without his signature mustache. 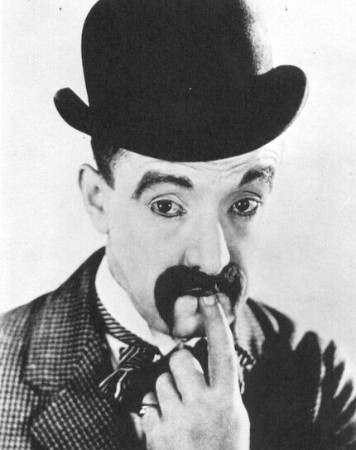 Snub in his silent heyday

In So Big, Selina is overwhelmed with the back-breaking farm work. In The Purchase Price, Joan figures there isn’t anything she can’t do, and cheerfully pitches right in, without Selina’s more realistic angst. And Joan’s life experience has prepared her well . When a sinister neighbor makes unwelcome advances, she is unfazed, and takes care of things herself. In both films, the wife makes the farm a success through the deus ex machina of a windfall investment. And, George Brent, usually a groaningly bland leading man, does manage to put a little oomph into farmer Jim Gilsonhe seems to have been most alluring during the 2 years (1932-34) he was married to Ruth Chatterton. He’s pretty good playing opposite Chatterton in Female, too.

“Let George do it!” was the battle-cry at Warners, when someone asked, “Who can rival Gable?” George–who’s a new he-man from Broadway–could think of lots of easier jobs. But they cast him opposite Ruth Chatterton in “The Rich Are Always With Us” and Barbara Stanwyck in “So Big”–so watch out, Clark!

William Wellman was a studio era director who, like Howard Hawks or Michael Curtiz, excelled in many different movie genres. Wellman hit it big with the silent era air spectacular, Wings, and Wellman had just directed Stanwyck in the Pre-Code gem, Night Nurse. They got along well, making five films together. Axel Madsen writes “Between set-ups she confided the details of her marital troubles with Frank Fay to her director. Because he understood ‘fellers’ better than ‘gals’ as she said, Wellman was better at explaining Frank to her than anyone. We do not know whether Wild Bill could explain delusion, tenaciously held, irrational beliefs, or whether she heeded his grousing, plain-spoken advice. We do know that when he turned in the first draft of A Star is Born three years later, David O Selznick pronounced it too close to the Fays’ real life dramas.” What Price Hollywood is also cited as a precursor to A Star is Born. That earlier film was written by Adela Rogers St. Johns, who also knew the Fays quite well. 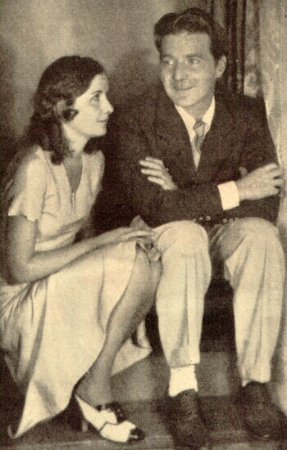 Acting for the still photographer: Frank and Barbara Fay

The Purchase Price was shot during Frank Fay’s worst behavior. As Barbara confided to the columnists about her idyllic home life, she omitted she was being abused by her husband. “I was a nobody until Frank Fay came along, ” she gushed to Faith Service of Motion Picture magazine. ” Doesn’t anybody realize that? Everything I know, he taught me. Everything I know of etiquette and the niceties of life, the correct way to talk and walk and meet people and entertain; everything I know of books and art and people and the world around me. The very success I am supposed to have would not be mine if it were not for him. I was nothing until he came along, and I would have been nothing a great deal longer if he had never come along. I can’t repeat that often enough.” 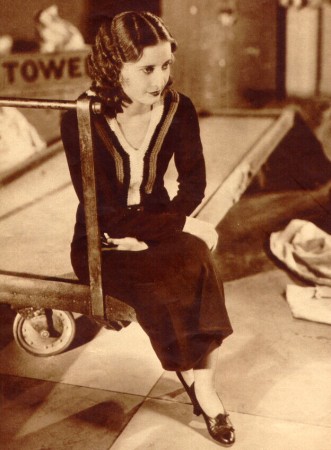 The critics agree on one thing about Barbara Stanwyck–she is one of the best emotional actresses on the screen today. And after you read the story opposite, you’ll know the reasons why. Her success, she says herself, dates back five years–to the time she met and married Frank Fay. She gives all the credit to him. But, perhaps she should give at least fifty per cent of the credit to Her Love For Him. She has needed only a child to make life complete. And at last she has one–hers by adoption. Now watch Barbara emote in “Woman in Prison!” NB: In costume for The Purchase Price; caption must refer to “Ladies They Talk About.”

“By her performance in So Big, Barbara Stanwyck definitely establishes herself with the writer as being a brilliant emotional actress. No matter what one may think about the picture, the final conviction of anyone who sees Miss Stanwyck’s Selina Peake will be that she herself contributes a fine and stirring performance, making of it a characterization which is direct and eloquent all the way.” (William Boehnel in the NY World Telegram quoted by Smith). “Wellman (in The Purchase Price) shows an admirable disregard for plausibility and motivation, and ends up with a film worthy of Luis Bunuel” (Thompson). Choose your poison.

(Photo from So Big from Grand Illusions, edited by Richard Lawton, photo of Brent and Stanwyck from The Purchase Price from Smith, Pollard from Clown Princes and Court Jesters by Kalton C. Lahue and Sam Gill, Brent portrait from Hilda Price’s 1931 movie star scrapbook, one of four photos of Brent within, photo of the Fays and Stanwyck portrait from Motion Picture. Sources include: So Big, by Edna Ferber, Stanwyck by Axel Madsen, William A. Wellman by Frank T. Thompson, A Woman’s View, by Janine Basinger, Starring Miss Barbara Stanwyck by Ella Smith, “Barbara Stanwyck Gets Her Heart’s Desire–A Son” by Faith Service in the December, 1932 Motion Picture magazine, “William Wellman” by John Gallagher in May, 1982 Films in Review.