A prim psychiatrist is entranced by a suave colleague who may be an imposter. Hitchcock’s bubbling caldron of guilt, Freudian analysis and murder is intensified by the Oscar winning, Theremin-spiced music by Miklos Rozsa.  “ A tense and exciting tale, a psychological thriller which is packed with lively suspense” (New York Times).

Alfred Hitchcock was brought to Hollywood by David O. Selznick for Rebecca. The film was a great success, and won a Best Picture Oscar (for Selznick, not Hitchcock, who never won an Oscar). Hitchcock was contractually bound to Selznick for two more films, and nobody in Hollywood would hire him until he fulfilled his commitment to the powerful Selznick.  The producer requested a film about the subject of “the healing potential of psychiatry” (McGilligan 348).  Spellbound was only the second Hollywood film to use psychoanalysis and the first one to use it to solve a murder, which may explain the use of only the most simplistic, and to us today, rather obvious symbols. Yet, the idea that a repressed experience has psychological power is commonly used today.  In fact, several of Hitchcock’s masterworks, like Vertigo and Psycho are based on precisely that idea.

The story was based, extremely loosely, on a 1927 novel called The House of Dr. Edwardes, written under the pen name Francis Beeding by Hilary St. George Saunders and John Palmer. Hitchcock said, “Well, the original novel, The House of Dr. Edwardes, was about a madman taking over an insane asylum.  It was melodramatic and quite weird.  In the book, even the orderlies were lunatics and they did some very queer things.  But, I wanted to do something more sensible…” (Truffaut 163).

The source material was transformed by director Alfred Hitchcock and his collaborators, first Angus MacPhail and then the seasoned screenwriter Ben Hecht.  They knew that the film could only employ what Hitchcock called “pseudo-psychoanalysis” (McGilligan 354) as he and Hecht crafted a romance shrouded in mystery.  First, they visited hospital facilities housing mentally ill patients for inspiration.  Although Hitchcock carefully did not mention Salvador Dali’s name until late in the process, he had always envisioned including the contributions by the famed surrealist. He didn’t want a dream sequence with out of focus figures wandering in the mist, but sharply imagined images.

Interestingly, the mystery reflects the details of a notorious real-life murder case.  In 1928, a 22 year old student was on holiday, hiking with his father in the Alps. The father fell down a ravine, and his son ran to a nearby inn for assistance.  By the time he returned, it was too late.  His father had been hit on the head with a rock and robbed.  The son was found guilty and sentenced to 10 years in prison, although the prosecution was so anti-Semitic, the case came to be known as the Austrian Dreyfuss Affair.  On his appeal, the prosecution used Freud as a motivation, saying the boy had an Oedipus complex, although Freud, himself, discounted it as a reason for murder in this case. After serving a shorter sentence, on the condition that he leave Austria, the young man came to American and changed his name, to Phillipe Halsman, becoming one of the 20th century’s most distinguished portrait photographers.  Because the case was so notorious, it’s quite possible either Hitchcock or Hecht was influenced by it as they reworked the novel (King 78).

A dream provides the key to unlocking the fictional hero’s mystery.  Selznick had undergone analysis, at the insistence of his wife.   He hired his own psychiatrist, Dr. May E. Romm “a motherly Freudian” (McGilligan 356) to peruse the medical details of the script, even though Hitchcock himself was quite skeptical with regards to the therapeutic process and was not concerned about realistic treatment details.

Hitchcock had an immediate rapport with Ingrid Bergman, and had been hoping to pair her with Cary Grant, one of his favorite leading men.  But, Grant declined the script (Selznick was relieved, he was awfully expensive) and replaced him with Gregory Peck, a young veteran of the La Jolla Playhouse, acting in only his third film. 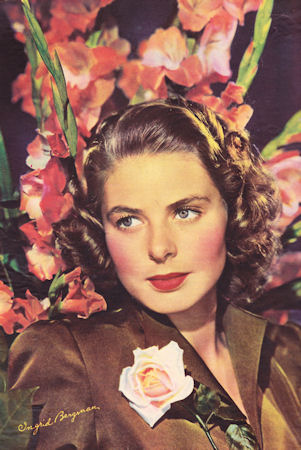 Hitchcock preferred technical actors, he was not interested in helping actors find motivation for their roles.  Peck found it a little frustrating, since he was new to motion pictures, and hoped his director would be willing to help him shape the character a little more.  However, this early foray into portraying a darker character would bolster his career, showing both his romantic attractiveness and his acting range.  He did not find it hard to act opposite Ingrid Bergman.  “I think you fall in love a little bit with a woman like Ingrid Bergman and I don’t think there is any way to avoid it, because she was so incredibly beautiful and a very sweet person…her lovely skin kind of took your breath away and her whole radiance was something to behold (Fishgall 98). Clearly, Peck was somewhat smitten with her, as was Hitchcock, who flirted rather outrageously with her throughout the filming. 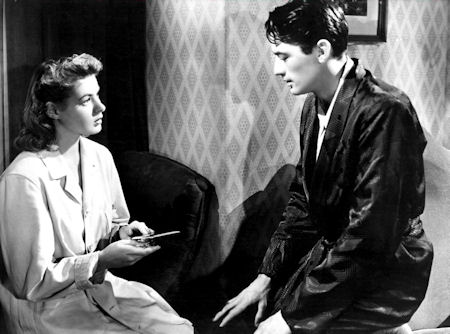 In the 1940s Salvador Dali began to realize that there was much money to be made from his celebrity.  He did a fragrance promotion for Elsa Schiaparelli (he had collaborated on her fashion collection in the 1930s, designing fabrics with painted lobsters and trompe d’oeil rips and tears, and inspiring such accessories as a saucy hat topped with a lamb chop) and then went on to use his symbolic obsessions to promote stockings, ties and perfume.  He also began to do book illustration and designed sets and costumes for ballets and a flamenco show.

A dream sequence was not a part of the original script.  The idea emerged, perhaps because the film’s art director, James Basevi, had worked with Dali on Moontide.  Producer David O. Selznick liked the idea of the publicity value of using Dali, in a memo he noted Dali had appeared in Life magazine 6 times in the last 12 months (Cochran 174).  Publicity was not Hitchcock’s motivation.  Dali agreed, in part because he liked Hitchcock “one of the rare personages I have met lately with some mystery” (Gibson 489).

The original estimate for the sequence came to a budget breaking $150,000, which Selznick termed “a ghastly shock” (King 79).  Scaled down to $20,000 the project commenced, with Dali and the studio agreeing to split ownership of the artwork produced during the process.  Because the sequence had to incorporate specific clues to the crime, Dali did not have the creative freedom he would have liked.  He arrived to find one scene, with 15 pianos suspended from the ceiling over a ballroom full of dancers being executed in miniature.  Another scene which would be cut after it was at least partially completed, involved Ingrid Bergman, dressed in a Grecian gown, transformed into a statue, then covered in ants.   Nor would there be a scurrying cockroach with an eyeball glued to its carapace.  The dream sequence was completed, more or less to Dali’s design, and he was paid an artist’s fee of $4000. 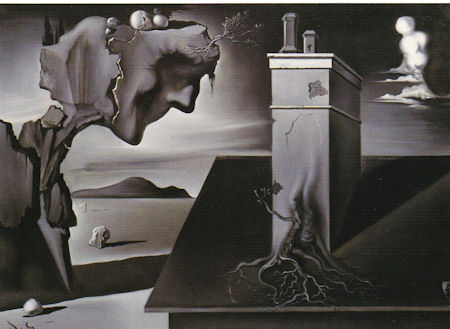 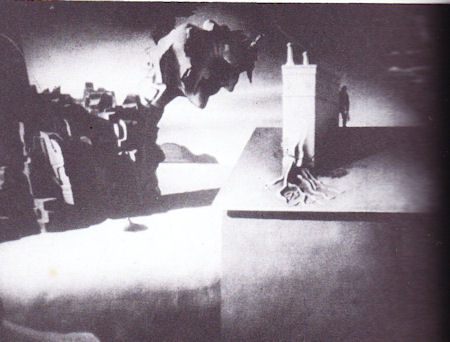 Above, the Dali painting, below, a screen cap of how the image appears in the film.

Hitchcock was exhausted from his dealings with Selznick, and after he finished the rough cut of the film departed for England.  At that point Selznick, who didn’t like the sequence at all, stepped in.  He recruited William Cameron Menzies, a brilliant production designer with whom he had worked before, to revamp the dream. He laid out a new storyboard and began to reshoot. Although the final dream sequence is “based on designs by Salvador Dali” little of what was shot under his hand survives into the final film. Hitchcock and Dali were both disappointed.  Ironically, it remains the most well-known of Dali’s Hollywood collaborations. 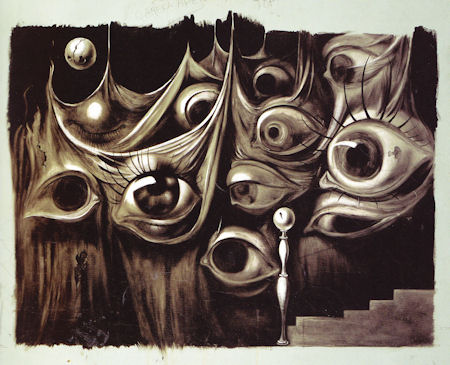 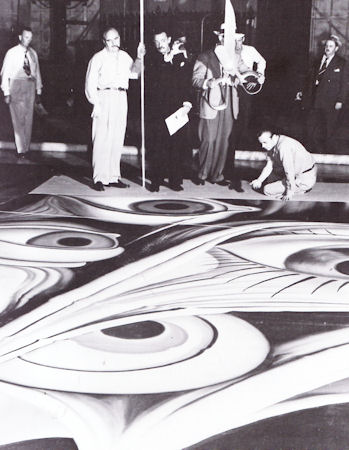 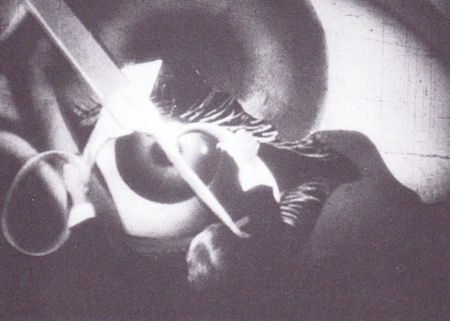 The curtain of eyes, as painted by Dali, supervising the art department (including the line for the scissors to cut) and the image as it appears in the film.

Yet, the disturbing atmosphere, including the curtain covered with eyes, are all Dali. He directly supplied some of the images.  In addition, his well know iconography was incorporated into the finished product.

Interestingly, there is one dream sequence just as well-known, retaining a larger percentage of Dali’s images, yet credit for it has been overlooked.  In Father of the Bride, Spencer Tracy has a vivid nightmare about his daughter’s impending nuptials.  That he collaborated with Vincent Minnelli in the sequence where Tracy finds himself losing his clothes and sinking into the church aisle has received relatively little critical attention.

Dali lived almost entirely in a dream world of his own making, which made it extremely difficult for him to follow through with the nitty gritty of film making, no matter how much the cinema would be able to bring his dreams to life in a way that a static canvas could not.  In an interview, one of his friends later in his life, Amanda Lear, said he could not dial a telephone, much less drive a car, and that his wife cautioned that he did not even know that you had to wait for the traffic to stop at a red light so he could cross the street (King 178).

The film was a huge success, it’s box office take at the Astor Theater in NYC broke even Gone With the Wind’s record (Molyneux 77).  The film was nominated for several Oscars, including Best Picture, although it won only for Miklos Rosza’s Theremin-laced score. Bergman did win an Oscar that year, but it wasn’t for her questing therapist, but as a warm and understanding nun in The Bells of St. Mary’s.

David Thomson wrote perceptively of the film’s great success, “It’s easy to make fun of, but in truth the intellectual climate of the time was very drawn to analysis. In previous wars, it had been enough to say some men were brave, and others not, but it was during the Second World War that nervous stress, battle fatigue and torture became respectable subjects…mental breakdown was not mere weakness or self-indulgence (Thomson 56). Although, noted critic James Agee sniffed that the film had “just enough of the id as could be displayed in a Bergdorf Goodman window (Molyneux 78).

The review in the January, 1945 issue of Motion Picture magazine

And, check out this great article from the New York Times, “Patriarchy is just a spell”

https://www.nytimes.com/2019/12/26/opinion/spellbound-movie-hitchcock/?smid=nytcore-ios-share (Sadly, this link is broken!)