“ The finished film is a glittering flow of polished glossy images that could leave breathless a spectator accustomed to the ‘normal’ film.” (Leda)

Storm Over Asia, or to give the film its original title, The Heir of Genghis Khan, was the third (after Mother and the End of St. Petersberg) in a trilogy of great romantic revolutionary films made by one of Soviet Russia’s greatest filmmakers, V.I. Pudovkin. Although a fictional story portraying the birth of political consciousness in a people more concerned with day to day survival than ideology, it effectively captured an historical moment when the ancient traditions of Tuva could still be documented before the Communist government began to extinguish them. The fictional story of a Siberian hunter whose mistreatment at the hands of the occupying colonial powers causes his transformation into a rebel leader in the style of his ancestor Genghis Khan sweeps this epic film towards its unforgettable climax. The organically perfect score on the DVD is provided by Yat-Kha, an ensemble with Tuvan throat-singing at its spiritual center, but incorporating many influences, including rock, blues, punk and avant garde.

Film director Vsevolod I. Pudovkin was born in1893. He fought in WWI, was wounded and spent time as a prisoner of war. His early interest in physics and chemistry vanished after seeing D.W. Griffith’s monumental Intolerance (1916) after the war. Pudovkin felt liberated by his work in the cinema, “In the exact sciences…I always felt myself to be a slave. The cinema allows me to create” (Taylor). He joined the Moscow State Institute of Cinematography and began directing in 1925. His trilogy assured his place at the forefront of world cinema, along with the work of his Soviet Russian colleagues, Sergei Eisenstein and Alexander Dovzhenko. Pudovkin was less interested in stirring images of the revolutionary masses than he was in emphasizing the heroic individual. Using a technique called “montage” devised by Eisenstein, Pudovkin cut together brief, sometimes unrelated shots in the editing room. The clashing images created new meanings, and a new kind of cinematic expression was born, one which continues to be influential today. Pudovkin likened this technique linking short scenes together to the assembly of individual words into a complete sentence.

Storm Over Asia was adapted from a novel based on a true incident that occurred in 1920, when the British army occupying Mongolia captured a partisan fighter and found in his possession a document verifying him as a descendent of the emperor Genghis Khan. But, the director was more interested in the mythic dimensions of the script than its realism. Nineteen typed pages with each scene delineated in a few words constituted the scenario. Pudovkin’s enthusiasm for the script stemmed in part from his certainty about casting the title role with an old actor friend, Valeri Inkizhinov, Buriat-Mongol by heritage, although educated in Moscow. The film might not have been made without him, but he had to reclaim his own heritage, for example, learning how to ride in the Mongol manner for the film. The man who plays his father was his real father, and scenes were filmed in the family’s traditional home. Pudovkin was relieved to escape from the urban pressures of Moscow and travel with his crew to the remote locations in the Altai, Mongolian and Tuvan Urianghai Central Asiatic Republics.

The filmmakers’ guide there was a cultured, multi-lingual Mongolian advisor named Achirov. He provided cultural background for the filmmakers, and as he described the life of his countrymen, the scenario began to take on the life of the region, embellishing the fictional story with the reality of life in Tuva. Buddhism was a central part of the lives of the people, which of course the Soviets considered an opiate of the masses, leaving them vulnerable to the evils and exploitation of foreign imperialism. But the director and his crew were quite interested in these important rituals. The filming at the monastery at Tomchinsk was stymied when the monks divided into two camps, one unopposed to the filming there, but the other strongly against. But, Achirov convinced the Grand Lama of Buriat Mongolia not just to authorize filming performance of the Feast of Tzai but to do so at the Pudovkin’s convenience, changing the traditional date of the elaborate ceremony. The monks even repeated any details needed to complete the sequence for the camera. The cinematographer captured the remarkable scene by hand-cranking what passed for a lightweight camera, a 15-pound Debrie, strapped to his chest.

Storm over Asia was an international success only after alterations were made in the intertitles. The British were outraged by their villainous depiction as unscrupulous fur traders, and foreign prints were reedited to identify them and their supporting army as “White Russian” or remnants of the old aristocratic order vanquished by the Bolshevik revolution. The film audience at home in Russia was divided, as the Communist ideologues were concerned that the symbolic “storm over Asia” which concluded the film was inconsistent with revolutionary realism as mandated by the state. Over the years, and for various reasons and under various censorship boards, the film was cut into shorter and shorter running times, and is restored and presented here in its original running length of 140 minutes.

Yat-Kha, was founded by Albert Kuvezin. He and his ensemble are natives of Tuva, a country you can locate on the map by finding the River Yenisei at the Arctic Ocean and following it to its headwaters. Those of you who saw the electrifying performance by Huun Huur Tu at Duke University several years ago have already experienced Kuvezin’s lush khoomei singing, with its deep rumbling bass and high harmonic overtones. He felt somewhat confined by Huun Huur Tu’s traditional style, which was incompatible with his more modern musical favorites such as Deep Purple and Sonic Youth. He took both his anarchic punk leanings and his guitar with him in founding Yat-Kha, which is the name of the long zither Kuvezin also plays. Yat-Kha’s other members include Zhenya Tkachov (kengyrgy, bvox), Mahmoud Skripaltschchik (bass), Sailyk Ommun (vox, yat-kha) and Radik Tiuliush (igil, vox) and they join with Kuvezin in combining the folkloric traditions of the Republic of Tuva in Siberia with a modernist sensibility to create a fusion style of folk-infused progressive rock. The band, admired by musicians as diverse as Brian Eno and Paddy Moloney of the Chieftains (Yat Kha records on his label) have played in worldwide venues, “prestigious music festivals, arts centers, reindeer herder conventions, sweaty punk clubs and open air arenas from Estonia to Palermo.”

Currently, there is a trend of accompanying ethnographic silent films with music by indigenous musicians, and Yat-Kha brings both their unique origins and their knowledge of contemporary world music to provide a rich collaboration between film, musicians and audience. This is the second time they have toured internationally with their remarkable score for Storm Over Asia.

“The final product was a film of extraordinary documentary authenticity and cinematographic expression. It was a true discovery of the east, only minus the pavilion exotica and oriental décor which tended to abound in every scene set in Asia in both Western and Soviet films. Even today, none of the scenes in The Heir of Genghis Khan has lost any of its profundity, sincerity or human poignancy” (Zorkaya). 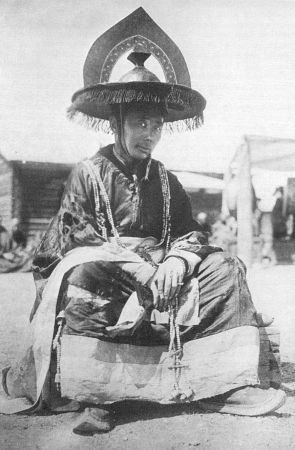 Participant in The Feast of Tzai

(Photo from Leda. Sources include: Early Soviet Cinema: Innovation, Ideology, Propaganda by David Gillespie, Cinema in Revolution: The Heroic Era of the Soviet Film, edited by Luda and Jean Schnitzer and Michael Martin, Kino: A History of Russian and Soviet Film by Jay Leda, Politics of Soviet Cinema 1917-1929 by Richard Taylor, Illustrated History of Soviet Cinema by Noya Zorkaya, An Index to the Creative Work of V.I. Pudovkin by Jay Leda, Film Encyclopedia by Ephraim Katz).