A successful middle aged female playwright falls madly in love with a struggling actor, who turns out not to be a dreamboat, but a predator.  Nominated for Oscars for Crawford, Palance as well as costumes and stunning San Francisco cinematography, this rediscovered noir masterpiece contains one of Crawford’s fiercest performances. “Like many underrecognized treasures, David Miller’s Sudden Fear fits into and defies different genres, its convention-scrambling partly the result of the fact that the film looks both forward and back” (Village Voice)

Why do I find myself drawn to film noir?  Because of the women.  Strong, resourceful, with plenty of agency, not just wives and girlfriends.  Joan Crawford’s character in Sudden Fear, Myra Hudson, is already rich and successful when the film begins.  Frankly forty-plus, she finds herself blindsided by a sexual passion that turns out to have a dark side. This was an era of “women in peril” movies. During World War II, women put aside their aprons for the welding torch. The 1950s encouraged them to return to domesticity, leaving the public sphere to men. Dial M for Murder, Sorry Wrong Number, The Spiral Staircase, each presented the spectacle of a hapless female being menaced, and then rescued.  Although this film fits into the genre, the outcome is rather different. 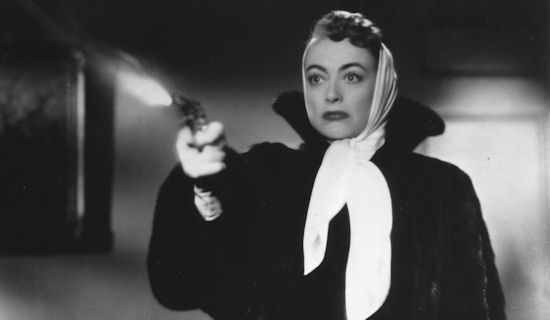 Crawford had enjoyed a brief revival of her career in the early 1940s at Warner Brothers with Mildred Pierce, Humoresque, Possessed and Daisy Kenyon.  But, the studio did not know what was best for a bankable actress of a certain age.  Crawford had been a big star for a long time.  She had clawed her way up from nothing, determined to light up the silver screen.  She cared about her fans, and she cared about her craft.  She worked hard to be the best she could be, and with a role like Myra, she is.

She was ready to be a free agent, and contacted an independent producer, Joseph Kaufman, telling him about a novel she had read recently by Edna Sherry, called Sudden Fear.   Joan would make many of the creative decisions.  She hired Lenore Coffee, a seasoned screenwriter she had known at MGM, and David Miller, a director she admired.  She even recommended Elmer Bernstein, just beginning to compose for films, to write an edgy, modern score and insisted on film noir expert and eight time Oscar nominee Charles Lang for the cinematography.  Clark Gable had been discussed to play opposite her, they had been friends for over 20 years and had an on again, off again romantic relationship.  But, he knew he was too old, at 51, to play a novice actor.  She reluctantly agreed instead to Jack Palance, who had replaced Marlon Brando on Broadway as Stanley Kowalski in A Streetcar Named Desire.  Sultry Gloria Grahame would be Palance’s accomplice. Krekor Ohanian, just 27, would have his first screen role in Sudden Fear. Billed as Touch Connors, a baseball nickname, he would gain fame in the 1960s as the tv private eye, Mannix. 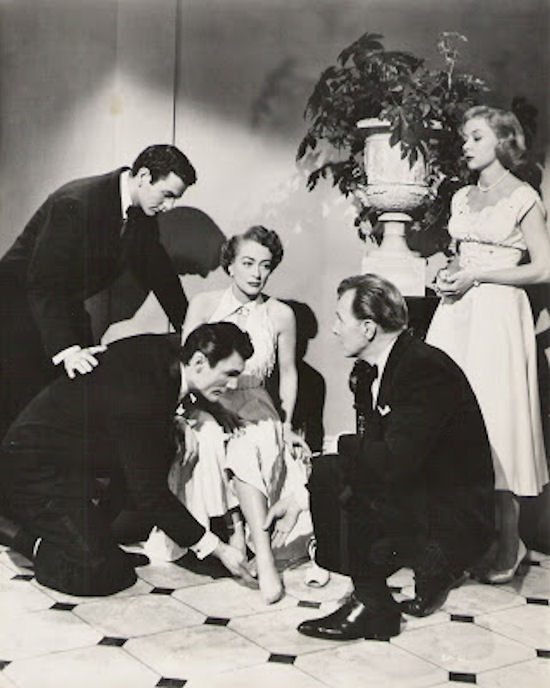 “It’s wonderful to be casting myself instead of accepting someone else’s idea of who I should play” Crawford told Time magazine (Spoto 216).  The company filmed on location in San Francisco, and enthusiasm ran high.  Crawford and Kaufman scraped together $720,000 for the film, with Joan taking 40% of the profits instead of a salary.  This would result in over a cool million for her when the run was over.  The plot was kept under wraps and Edna Sherry was persuaded to delay the paperback release until after the film came out, which I’m sure benefited her, as well. 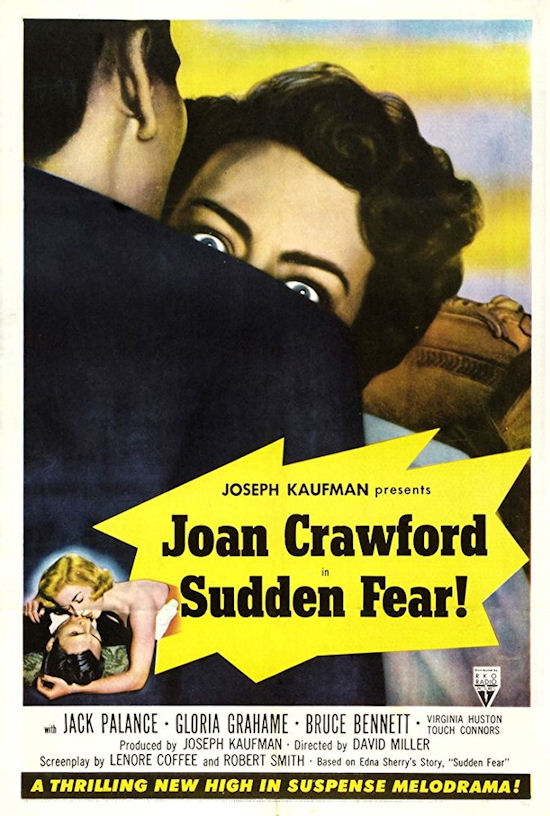 Crawford and Palance did not get along during the shoot.  She had to be persuaded to cast him in the first place (the director made her watch him Panic in the Streets three times).   She did not think he was handsome enough to be her leading man, and this would be his first leading role.  “You don’t love me, you don’t respect me!  How could you even suggest that I accept such a leading man?  Don’t you realize that I have played opposite the biggest stars in film?  Gable, Tracy, Taylor, Cooper!”  (Thomas 178).  But Miller firmly insisted that it would take a powerful appearing actor to be convincing as a menace to such a strong woman.

Palance was born Walter Palahnuik in a Pennsylvania coal mining town, to Ukranian immigrant parents.  Drawn to boxing and football as a teen, he won an athletic scholarship to UNC Chapel Hill, but was much more interested in sport than classes.  His parents cried when he dropped out of college after two years, to become a professional boxer, and then to train as a bomber pilot in WW II.  After a serious crash, he was discharged, and went to Stanford on the GI Bill, and where, after a role in a local production, borrowed cash from his roommates and left for New York to become an actor.  He got work right away, eventually understudying and then replacing Marlon Brando in A Streetcar Named Desire.  His first movie role, in the exciting noir Panic in the Streets led to his villainous turn in Shane, and then, Sudden Fear. His stellar reviews for this film, even while being labeled “the ugliest man on the screen” got him an Oscar nomination, and then another one the following year when Shane was released.

Palance did not react well to Crawford’s  grand dame manner (she arrived with an entourage and  personally greeted the crew every morning) which he found insincere, and she was unconvinced by his Method acting mannerisms.  She would not have been averse to a real life affair with him (not unusual for her) but he was having an affair with Gloria Grahame, instead, which certainly added some real life context to the filming.  Like many actors, he did not appreciate his leading actress’ more powerful position, “She’s a woman and has to have her way in everything” he griped to a reporter (Quirk and Schoell 162). 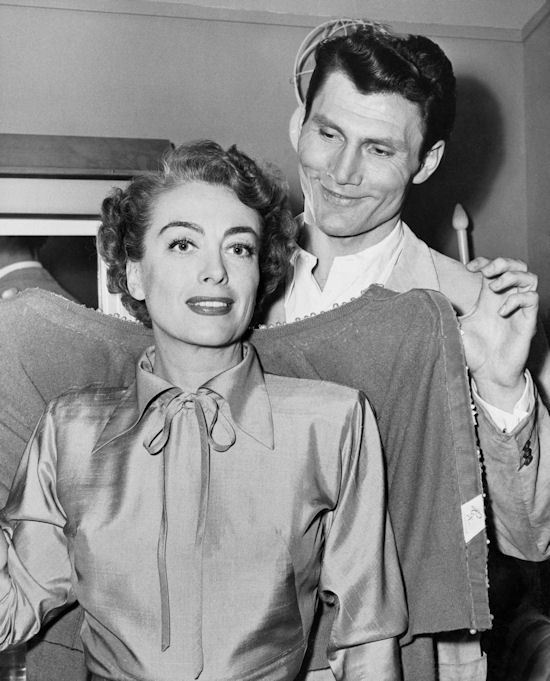 Crawford, in charge behind the camera, as well as in front, insisted there was no money for her personal designer to do Grahame’s costumes as well, those would be shopped off the rack.  She didn’t mind if Grahame looked less attractive on camera; perhaps Crawford even insisted that Grahame’s clothes were altered to make them frumpier.   She barred Grahame from the set unless she was on camera, so she would sneak in and hide to trigger a Crawford tantrum.  Eventually, Crawford and Palance never spoke except when exchanging dialogue.  This certainly aided in ratcheting up the tension on screen. 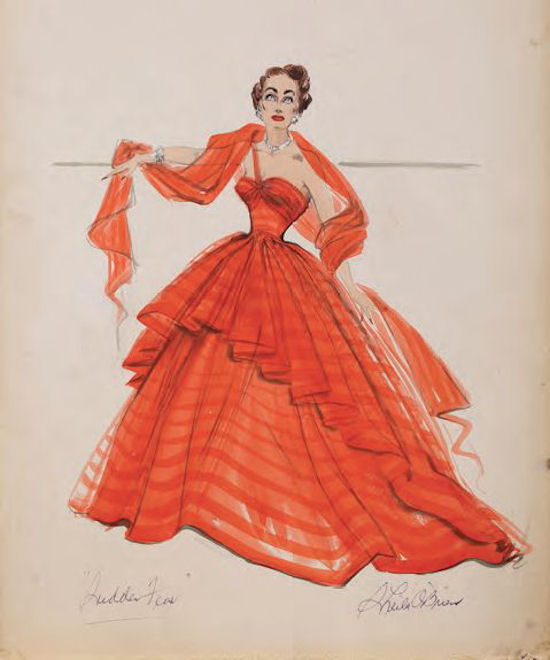 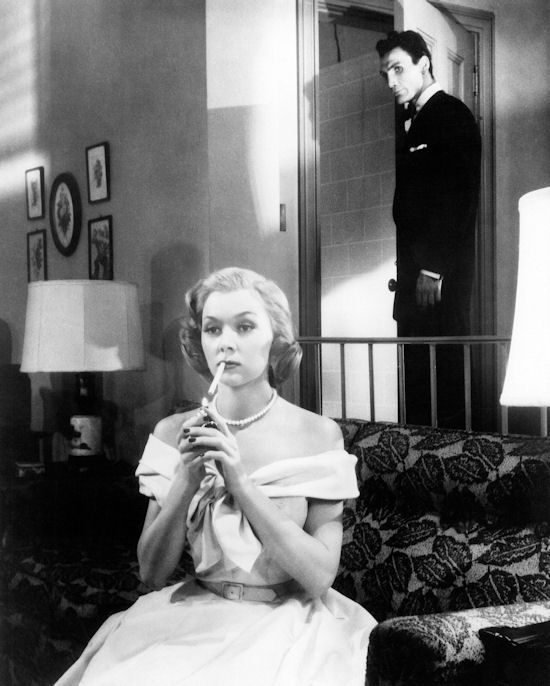 Crawford informed Miller, when he said he wanted to see her bare shoulders under the covers after her honeymoon, that would be impossible, since she had eight nightgowns, whose straps needed to be screen tested.  Miller complied, showing her what a fantastic waste of time and money it was, to get her cooperation on other matters. And, she did eventually agree to the bare shoulders.

Mike Connors recalled, “There were days when Joan looked so angry that I was afraid she was going to chuck something at Jack.  She put all this intensity into her performance, instead, thank goodness.  She pretended Gloria didn’t exist, and I just tried to stay out of her way.  I think David Miller found it all a trial, but he stayed on keel in spite of it.  Not the easiest way to make movies, but exhilarating, I guess” (Quirk and Schoell 163). 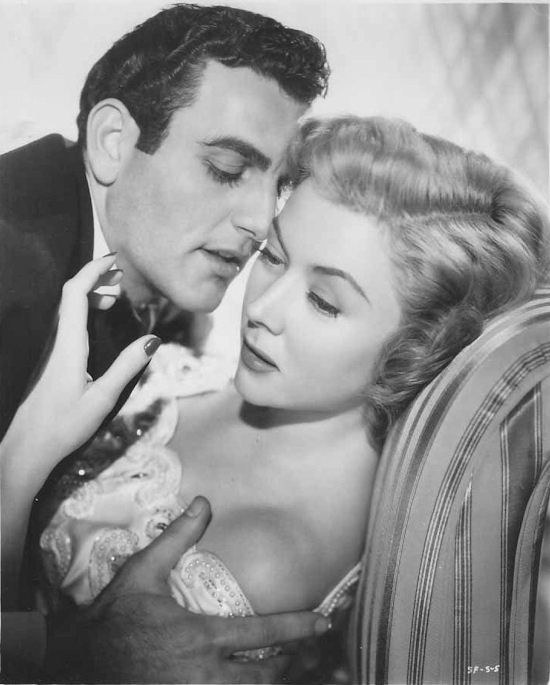 In spite of all the angst, Joan never regretted a moment, since the outcome was an excellent film.  “One of my better efforts. Not humble, maybe, but it’s the truth” (Quirk and Schoell 164).

The film was a smashing success, not only at the box office, but critics and awards.  The film was nominated for four Oscars, for Joan, for Jack Palance, for the photography and for the costumes. Crawford was also nominated for a Golden Globe. This new restoration is courtesy of the Cohen Film Collection. The almost sold out audience at the North Carolina Museum of Art really enjoyed a film few had heard of before the screening. They reacted strongly to Crawford’s intense acting style, and the jump scares and suspense. The applause at the end was long and enthusiastic. It’s so gratifying to introduce an audience to a new favorite! 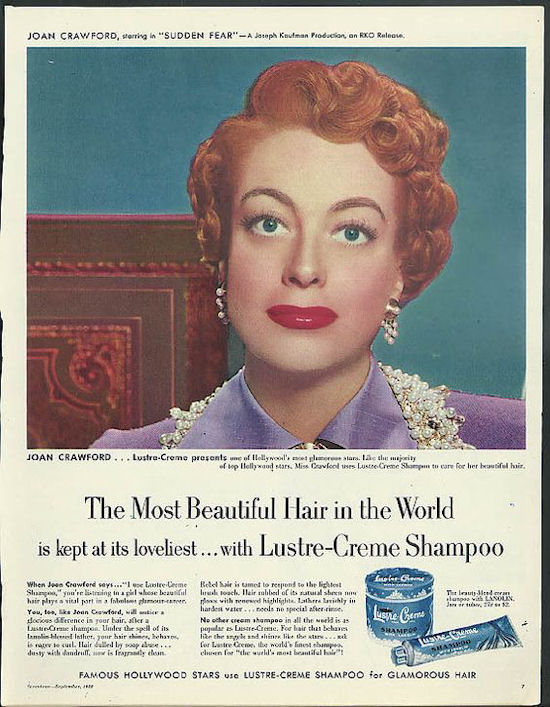 Promotion is everything! Shampoo… 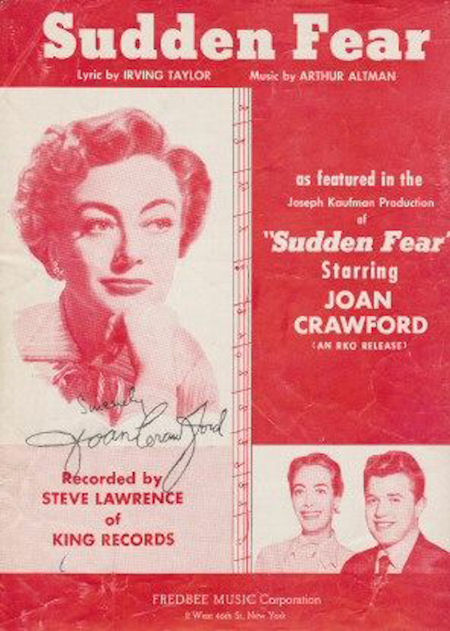 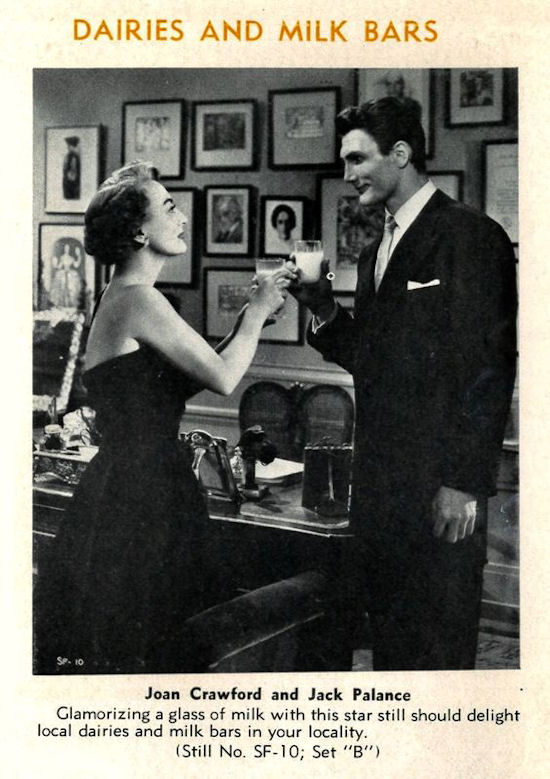 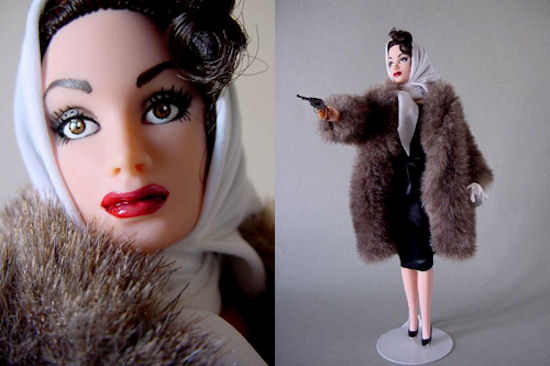 Even Barbie does Joan