Tony Curtis, a real, old style Hollywood movie star died last year (2010), and I wanted to program a film as a tribute to him. He was born Bernie Swartz, a Hungarian Jewish kid from the Bronx. His sixth wife, Jill Curtis said “All Tony ever wanted to be was a movie star.” Even as a scrappy street kid, he knew his face would be his fortune and avoided brawls that would damage his looks. When he signed a 7 year contract at Universal in 1948, he began a career at the twilight of the studio era. Universal may have changed his name, but did not smooth his rough edges, leaving his New York accent (even in period films) and his brazen charm.

Some Like It Hot, clearly the peak of his career, is familiar and beloved. I scanned the obituaries looking for something a little fresher, and watched a number of them. Operation Petticoat? Not funny and too sexist. Houdini? Trapeze? Meh. Boing Boing (recently revived on Broadway) Even more sexist. Sparatacus? Too long. The Defiant Ones? His only Oscar nom… too preachy. His early sword and sandal movies for Universal, The Prince Who Was a Thief, Son of Ali Baba? Great fun…and completely unavailable on 35mm, DVD or even VHS. So, I returned to The Sweet Smell of Success, praised in the 2/25/11 Entertainment Weekly, “Quite simply one of the greatest New York movies—and movies, period—ever made.” 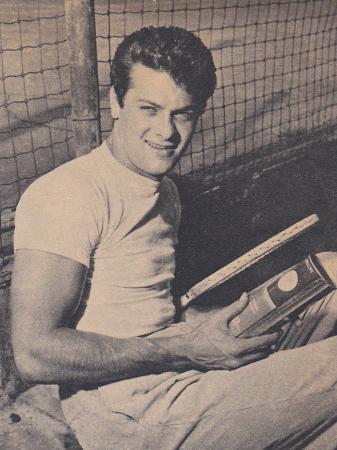 Lancaster’s independent production company, Hecht Hill Lancaster was the first non-major studio to win a Best Picture Oscar, for Marty, starring Ernest Borgnine. Sweet Smell.. was directed by Alexander MacKendrick who was fired from his next film when this one was deemed a flop. Time has shown it to be anything but a flop, but instead one of the most corrosive views of the glamour and hustle of New York City. This is the enticing, corrupt New York of Mad Men.

Sweet Smell of Success was based on a novella by Ernest Lehman called “Tell Me About It Tomorrow.” It was the first Hollywood movie to depict manipulation of the press during the McCarthy era, and its bleak view of the culture of celebrity portends the even greater era of the exploitation of fame that blankets current media. Lehman in his youth had worked for Irving Hoffman, an influential press agent and columnist. He was a friend of the emperor of gossip, Walter Winchell, who had a syndicated newspaper column and a national radio show. He could make or break a performer or politician merely by mentioning them, and his staccato delivery was distinctive, and he had a way with slang (he is credited with creating words like “pushover” and “scram”). Winchell helped create modern day celebrity culture, and his power had a dark side. A friend of J. Edgar Hoover and Joseph McCarthy’s minion Roy Cohen, he became a fearful figure, accusing people of being communists and essentially blackballing them. Winchell was powerful and feared. Insiders knew he had a seemingly too close relationship with his daughter, Walda, becoming apoplectic if any man became too close to her. Lehman’s inside view of this world both fascinated and repulsed him.

Because Lehman had worked for Irving Hoffman, he was also welcome in Hollywood, where he wrote the scripts for Sabrina (with Billy Wilder) The King and I, and an original script for Alfred Hitchcock, North by Northwest. His novella was rejected as a possible screen adaptation both because of material that challenged the Production Code, but also because of the studios’ fear of Walter Winchell, clearly the model for J J Hunsecker (the columnist was known as WW). But, by 1957 the atmosphere in Hollywood had changed. Winchell had lost his radio and tv shows and McCarthy had been discredited. Hecht-Hill-Lancaster had some significant critical and financial successes, and they were interested in Lehman’s story. He said, (Hecht Hill Lancaster) felt a great affinity for Sweet Smell. They dug it. Nobody else did, really” (Naremore 27). It was a daring film for its day, and now seems terrifyingly prophetic.

At first, Orson Welles had been mentioned to play Hunsecker, but as production neared, Lancaster said he wanted to play it. Lehman had originally been slated to direct, as well, but he was afraid of Lancaster, as many were. Elmer Bernstein, who composed the score said, “Burt was really scary. He was a dangerous guy. He had a short fuse” (Naremore 29). His coiled menace is one of the things that makes his performance so effective. Director Alexander MacKendrick was an American who had spent most of his career in Britain, where he directed some dark comedies at the Ealing Studio, like The Ladykillers. He was familiar with British tabloid journalism, and was enthusiastic about the film’s atmosphere and subject matter.

MacKendrick felt the script could be improved, and to that end, American playwright, Clifford Odets, was hired. Odets was a true working class artist, and author of Waiting for Lefty, Awake and Sing, and Golden Boy. He was a major (uncredited) author of Hitchcock’s Notorious, the originator of the script for the film that evolved into It’s a Wonderful Life, as well as possibly being the inspiration for the character of the Coen Brothers’ Barton Fink. His career was at an extremely low point after the trials of the blacklist, but nearly everyone at Hecht Hill Lancaster considered him a genius. He was an excellent source to explore the dark side of the American dream of fame and celebrity; he considered success “the peritonitis of the soul” (Buford 179). He hung out with Walter Winchell to get a sense of his lifestyle and power. He would do 11 major rewrites, as well as punching up individual scenes, sometimes right on the set. The dialogue from the film is so extraordinary, that it is eminently quotable, “few films have employed such deliberately ‘stagey’ language, in this case a mixture of gutter poetry and Winchell-ese of a sort that was never actually spoken in New York” (Naremore 40). The Production Code, being liberalized for the first time, sent a list of suggestions for taboo topics and language: all suggestions were ignored. 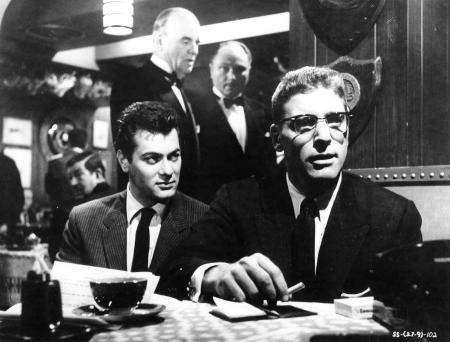 Mackendrick was a meticulous director whose penchant for perfection tried the patience of many associated with the film. “The truth was that Sandy (Mackendrick) had been driving Burt and Harold (Hecht) crazy right from the start of filming. Sandy wanted every detail to be just so, and too often Burt and Harold didn’t think Sandy’s perfectionism was necessary. If we were drinking cocktails, Sandy wanted the drinks to be a certain color. If we were having dinner in the movie, he wanted what we were eating to be the kind of food the characters would choose. He insisted that all these things were necessary, but no one else saw the need, which only made Sandy surly and ill-tempered. He wanted his pictures the way he wanted them. Everyone agreed that details were important, but he was slowing the production down so much that it was costing Harold and Burt and lot of money” (Curtis 182).

The gorgeous cinematography is by James Wong Howe, whose career dated back to the silent era (including Mantrap). He had won an Oscar the year before for Lancaster’s The Rose Tattoo, and was one of the originators of the use of source lighting for naturalistic effect. MacKendrick suggested Lancaster wear his own glasses as Hunsecker, to give him the look of a “scholarly brute” (Naremore 61). Howe accented them by using a wide angle lens from a low angle, and using an overhead spot to cast sinister shadows. A spot of Vaseline on the lenses distorted his eyes, as well as slightly disorienting the actor.

The night location photography in New York City is outstanding. Mackendrick wanted every scene to begin and end on the sidewalk, and in the background, the Palace Theater, the Brill Building, and Duffy Square. Using the quarter hour of dawn and dusk for many scenes put a lot of pressure on the production and actors. The interiors of 21 and Toots Shor’s were carefully recreated sets in Hollywood, with moveable walls for the camera. They were built two feet off the stage, so the smoke pots could fit underneath, providing a curtain of haze. The walls were coated with oil to make them glowingly slimy.

Tony Curtis, dismissed as teenaged girl catnip, desperately wanted to play the role to confirm his ability as a dramatic actor, which the film decidedly did. He was an acquaintance of Lancaster’s and they had starred together Trapeze with Gina Lollobrigida. Curtis trained as a circus flyer for the film, and he and Lancaster looked mighty good in their tights. Trapeze was a big hit, and both stars were at the top of their games. Curtis jumped at the chance to be in Sweet Smell… Tony Curtis’ teen aged fans were mad that he was playing such a dislikable character, and he was annoyed that nobody would give him credit for being a serious actor.

Susan Harrison’s acting ability was somewhat limited, she had only worked as a waitress and model before this film. She was cast, in part, because she resembled Winchell’s daughter Walda, and was styled in imitation of her.

Of course, the film was a flop when it was released. Cynical and cruel, with no hero to root for, up against box office champs like Bridge on the River Kwai and Peyton Place, it was a film ahead of its time. Tony Curtis had just received the 1957 Golden Globe for Most Popular Male Actor, but his fans did not want to see him play Sidney Falco any more than Lancaster’s fans wanted to think him anything like JJ Hunsecker. Director Mackendrick said later, “Stars have a persona that stays the same, therefore they must be enteraining monoliths that never change. Burt was better than a star. He had a moral courage at playing roles that are quite against any star image” (Buford 183).

As Clint O’Connor wrote in the Cleveland Plain Dealer, “Seen from the 2000s, Sweet Smell of Success is clearly one of the great films of the 1950s, a noir classic that inhales you, with Curtis at its zenith. He and Lancaster could easily scooped up Best Actor Oscar nods. Amazingly, the movie received zero nominations.”

“Half a century later, it is for many the hip American movie. A swan song to noir, the gleefully cynical exposé of the sleazy link between celebrity and the press, between naked ambition and corrupting success, stands in stark contrast to the musicals and Biblicals of 1950s Hollywood” (Buford 177). Or, as Curtis described it, “A feel bad movie” (Buford 178). 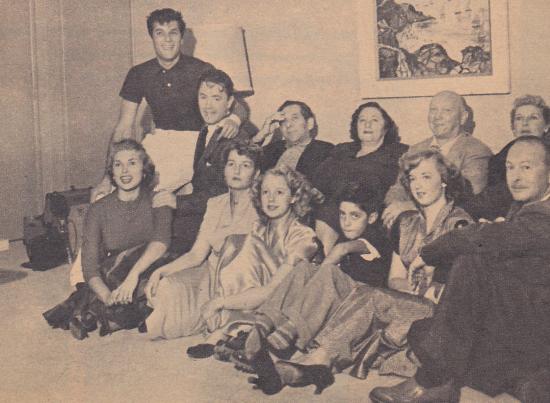 A fan magazine documentation of a family gathering, Janet Leigh’s father’s 44th birthday (he is seated far right, Janet’s mother is on the couch right behind him. 44 looked older then!) Tony Curtis’ parents, the Swartzes are on the couch, his father, Mono has his hand to his forhead, his mother is next to him. The little boy is Tony’s kid brother, Bobby, the rest assorted uncles, cousins, etc. The article’s title states, “Helping to toss a birthday party for Janet Leigh’s Dad, Tony proves he’s one Bridegroom who has no in-law trouble. And neither has his bride.”

The sepia toned photos are from a 1952 scrapbook assembled by one of Tony’s presumably teenaged fans, who may have been offended by his playing Sidney Falco.