Sociopath Tom Ripley is hired to insinuate himself with a dissolute playboy, and melts into the lifestyle with amoral aplomb.  Minghella’s  “ hypnotic, sensually charged adaptation of Patricia Highsmith’s fascinating reptilian murder story has the same kind of complex allure that made The English Patient so mesmerizing” (New York Times).

I hope some of you came last week to watch Purple Noon, and can compare these two contrasting versions of Patricia Highsmith’s novel, The Talented Mr. Ripley. They are surprisingly different.  René Clément’s Purple Noon is gorgeous, but the settings are stark.  Mongebello, the village where Phillipe (Dickie) Greenleaf lives is sun baked, with little vegetation, just the sky and the sea.  The house is nice, but modest, as are the characters’ wardrobes, although I can be a little obsessed with those 60s bathing suits that Marge (Marie Laforêt) wears, with their off-the-shoulder necklines and little sleeves.

Anthony Minghella’s film, made 40 years later, evokes the time period with a glamorous nostalgia.  Everywhere Tom, Dickie and Marge go is enviable, beautiful houses, stylish clothes, intoxicating nightclubs, familiar landmarks in golden sunlight, so the viewer, too, wishes to live Dickie’s life…in the PAST.  In Clément’s film, Phillipe is rich, he has a nice yacht, all the money he wants, but he’s a cad.  Tom doesn’t want to be Phillipe, as much as he desires his privileges.  In Mingella’s version we understand Tom’s desire to live that life, because we all want to go back in time to 1950s Italy, too. 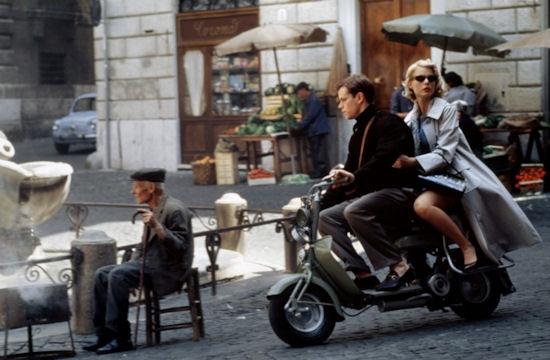 Patricia Highsmith, the author of the Ripley novels, Strangers on a Train and numerous other works, was a lesbian at a time when she had to remain firmly in the closet, and this life experience informs almost all her writing. She presented one face to the world, and was another person in her private life. “She had experienced at first hand many of Ripley’s characteristics—splintered identity, insecurity, inferiority, obsession with an object of adoration and the violence that springs from repression. Like her young anti-hero, she knew that in order to survive, it was necessary to prop oneself up with a psychological fantasy of one’s own making” (Wilson 197).

She was born in Fort Worth, Texas, and shared a birthday (January 19) with Edgar Allan Poe. Her writing owes debts both to him, to hard boiled fiction of the 30s and 40s but also her love for bleak, existential philosophy.  Her childhood was miserable, she called it “a little hell.”  Her parents were divorced before she was born (at her father’s urging, her mother drank turpentine in hopes of terminating the pregnancy) and she hated her stepfather so much, she constantly daydreamed of murdering him.

The Talented Mr. Ripley was the first of Highsmith’s five Ripley novels.  She wrote it quickly, taking only six months in 1954.  “It felt like Ripley was writing it.  It just came out” (Wilson 191). She used as her inspiration Henry James’ The Ambassadors, and her own obsession with identity. “Pretenses when begun early enough become true character…and the curious truth in human nature, that falsity becomes truth, finally” she wrote in 1949 (Wilson 192).  She had seen a young man strolling on the beach in Positano, Italy, in 1952, and in her imagination, split him into two characters.  She was also inspired by a newspaper story in which a man, presumed dead, was discovered attending his own funeral.  Susanna Clapp, writing in The New Yorker called her “a balladeer of stalking.  The fixation of one person on another—oscillating between attraction and antagonism—figures prominently in almost every Highsmith tale” (Wilson 5).

It was not difficult for her to imagine herself as her most famous creation.  “It became a popular book because of its frenetic prose, and the insolence and audacity of Ripley himself. By thinking myself inside the skin of such a character, my own prose became more self-assured than it logically should have been.  It became entertaining” (Wilson 194). He was real to her, some critics thought she was in love with him, but she thought that she was him, occasionally signing herself, “Pat H., alias Ripley” (Wilson 194). 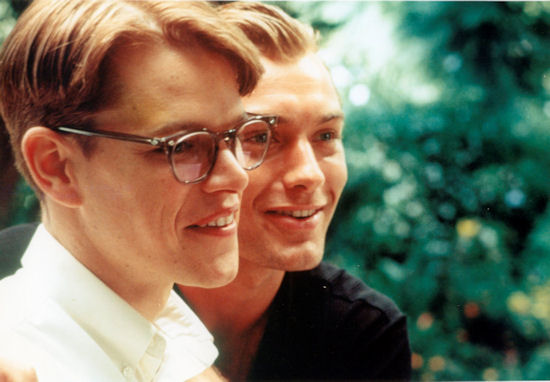 Critic Geoffrey O’Brien feels that Mingella makes Matt Damon’s Ripley more “a figure of pathos, and the film a critique of his misguided yearnings.”  Director Anthony Mingella said that as a child of immigrants living on a small island, he felt he was always looking in, and identified withTom Ripley’s feelings of exclusion.  “What I’m always trying to find is what’s personal, to live with a film for two, three, four years of your life, it has to situate itself somewhere in your own obsessions.  I’ve always wanted to exchange myself with somebody else” an impulse he shares with Highsmith.

He wanted the film to be a celebration of Italy, which is almost like another character in the film, and he certainly succeeds.  Minghella was influenced by many of Italian films of the late 50s and early 60s, La Dolce Vita, but particularly I Vitelloni, which has a lot of friends just hanging around and doing nothing. He made one substantial change from both the book and Purple Noon. In Clément’s film, Tom slowly decides to impersonate Phillipe. In Minghella’s, 8 minutes in, Tom is already introducing himself as Dickie Greenleaf.

Minghella didn’t want to do the film unless he had somebody really great for Ripley, and after he saw Matt Damon in Good Will Hunting, he knew he understood the character.  Jude Law had the aristocratic confidence, and the comfort in his own skin, that was vital for Dickie Greenleaf.  Mingella said he thought he would be perfect because he’s “unbearably handsome in a film that is so much about the desire to be somebody else.  Who would you rather be than Jude Law?”  Maurice Ronet in Purple Noon is a bully (he tosses Marge’s book manuscript overboard) and he is much easier to hate than Jude Law. 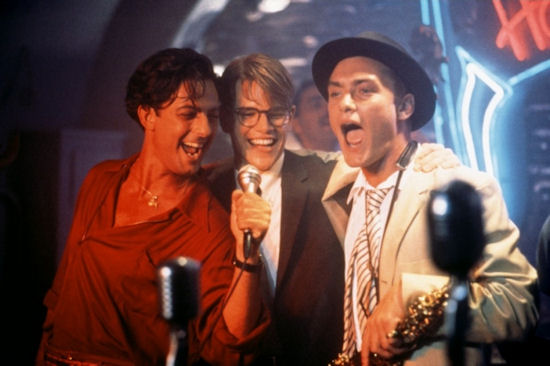 Cate Blanchett’s part was much smaller in the original script, but when she agreed to the part, Minghella enlarged it for her.  Having the two couples (Dickie/Marge and Tom/Meredith) be mirrors of each other was entirely a result of Mingella’s casting choices, a distinct departure from the book. In fact, because of the high profile actresses playing the roles, the heterosexual romance has a much greater emphasis than in either Purple Noon, or in the novel, which was distinctly homoerotic. One advantage to making the film in the present day is the ability to explore gay themes  In the book, in the very first scene, where Tom meets Dickie’s father, he first thinks he is trying to pick him up in a bar. Nowadays, Tom’s love-hate relationship with him can be shown to be sexual as well as aspirational.

Of course, even though it was programmed long before his tragic death, this film is also our little tribute to Phillip Seymour Hoffman.  “Everyone who admires the film remembers his arrival—one of the great arrivals, indeed in the history of cinema, as he jumps from an open-top Alfa Romero in an Italian piazza, bops towards us, kisses Dickie, pours a slug of wine, and throws it down his gullet in a single draft…Mingella saw the fruitfulness of allowing characters, and the actors who embodied them, to take turns in the spotlight—to strut and fret their time upon the stage, and them make way.  Who owns the movie is never quite decided, and the one thing more full blooded than Hoffman’s swagger in his first appearance, is the elan with which he yields to the blissful air of repertory—a travelling troupe, putting on a show.  There is a modesty in that approach; an unexpected trait, in such a force of nature as Philip Seymour Hoffman, and in so immodest a trade as cinema” (Lane 119). 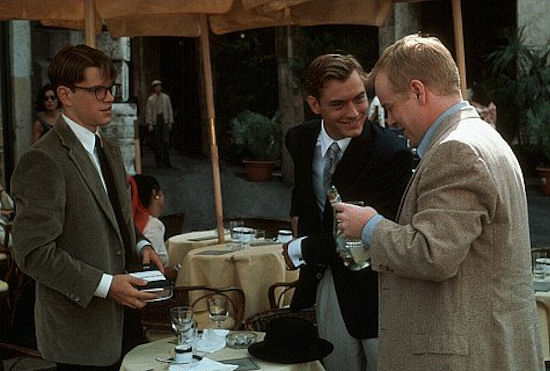 Highsmith thought there was a distinct parallel between writers and psychopaths. Will Self, on a BBC tv program said, “I think she’ll be remembered as one of the great mappers of the topography of criminal psychopathology, and an anticipator, in a way, of the collective obsession with serial killers and evil that has come to pass, a precursor, if you like” (Wilson 6). Grahame Green, who greatly admired her writing called her “the poet of apprehension…in a world without moral endings…nothing is certain when we have crossed this frontier” (Wilson 7).

“There’s an odd moral requirement in the Hollywood film.  Good guys have to triumph and bad guys have to get caught.  What is Ripley, is he a hero or a villain?” (Mingella).  Highsmith clearly considers him a hero. She thought the true 20th century everyman was the psychopath.  She wanted to write a novel, seen through the eyes of someone “abnormal” with whom the writer sympathizes so much that the reader identifies completely.  She thought only stupid people were content. In 1942 she wrote,  “I believe people should be allowed to go the whole hog with their perversions, abnormalities, unhappinesses…Mad people are the only active people, they have built the world.” 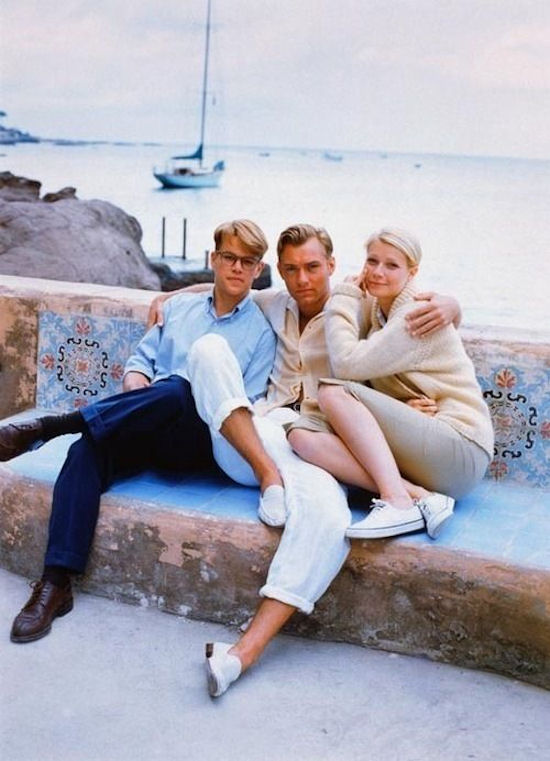 DVD interview with Anthony Mingella, Beautiful Shadow: A Life of Patricia Highsmith by Andrew Wilson, “The Master: Remembering Phillip Seymour Hoffman” by Anthony Lane in the Feb 17 & 24 The New Yorker.