Francois Truffaut’s autobiographical film debut was prodded by a restless desire to purge the demons of his miserable childhood. A passionate cinephile drifting into petty crime, Truffaut spent his 17th birthday in jail, convinced he would die there before he ever made a film. Ten years later, after a tumultuous stint as a film critic at Cahiers du Cinema, his first feature won the Director’s Prize at Cannes. The 400 Blows (slang for “raising hell”) is considered to be the flashpoint of the French New Wave, almost of modern filmmaking itself.

Truffaut poured his heart and soul into his first feature. And, his films are filled with a warmth and humanity that many other early classics of the New Wave by directors like Jean-Luc Godard, Claude Chabrol or Eric Rohmer lack. Rebellious, the unwanted child of an unwed mother, nothing was more important to Truffaut than the movies. In The 400 Blows, the mother’s matter of fact coldness towards her son is alarming. Some parents simply don’t love their children, and rarely has this been portrayed more chillingly. Young Truffaut (and his files filled with film notes) were barely tolerated in his own home. Many of the episodes are directly autobiographical, for example the typewriter theft, even though Truffaut maintained that the film was not about him, but was closer to the childhood experiences of one of his friends. In the brief scene where the family has an enjoyable outing (to the movies, of course) he shows the wisp of hope that leads every unhappy child to think that now, finally, his family life will be a harmonious one.

As a teen, Truffaut saw three films a day and read three books a week. Cahiers du Cinema critic Andre Bazin became his refuge; mentor, friend and surrogate father, encouraging his questing mind and acid pen. Truffaut moved in with Bazin and his wife and sincerely felt the movies had saved his sanity. He was denied press credentials for the 1958 Cannes Film Festival due to his arrogant disdain for the polite style of “quality” French films and his lionization of American movies and directors. In 1959, this exorcism of his difficult youth won the Cannes Director’s Prize. 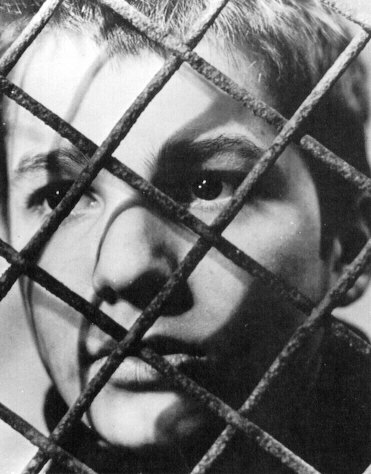 In the studied recklessness of The 400 Blows, and throughout his career, Truffaut’s adoration for classic films and film genres permeates every frame. Truffaut had a complicated relationship with Jean-Pierre Leaud, who plays his alter ego in this film and also in Love at Twenty, Bed and Board, and Stolen Kisses. He wrote: “I think in the beginning there was a lot of myself in the character of Antoine. But as soon as Jean-Pierre Leaud arrived, his personality, which was very strong, often led me to make changes in the screenplay. So I consider that Antoine is an imaginary character who derives a bit from both of us.” Leaud was also a fractious teen, and became almost a member of Truffaut’s family. Their relationship echoed the one Truffaut had with Andre Bazin, although far more contentious, as Truffaut continued his lifelong struggle to separate his life from his art.

This question has tormented me for thirty years: is the cinema more important than life? –Francois Truffaut

Truffaut by Antoine de Baecque and Serge Toubiana is a fascinating synthesis of the director’s personal and creative lives.