Although known today primarily as the devoted mistress of media mogul William Randolph Hearst, on screen Davies was a sprightly imp at her best in the comedies directed by silent era great King Vidor. Here, she faces off against her imposing mother, played by Marie Dressler, a social climber trying to push Marion’s older sister into society. “(Davies) had a bouncy, elfin personality, she was a natural clown with a great gift for mimicry and her porcelain prettiness photographed like a dream.” (Stein) Shown with “Pass the Gravy” starring Max Davidson. Live music by Maestro David Drazin.

Davies was a popular star of the 1920s, either because of, or in spite of, her famous patron, William Randolph Hearst. Sadly, her artistic reputation was sullied by Orson Welles’ Citizen Kane. Welles repeatedly denied that the shrill harpy Susan Alexander, Charles Foster Kane’s mistress, was based on Marion. He wrote the introduction to her autobiography, The Times We Had refuting the similarities and called her, “one of the most delightfully accomplished comediennes in the whole history of the screen.” (He also denied Charles Foster Kane was based on Hearst.) Hearst tried to destroy Welles’ film, supposedly more for the aspersions cast upon Marion than on himself. But, even without Citizen Kane, there had always been snickering over the enormous budgets Hearst lavished on his lover’s films, her $10,000 week salary, the private 14 room bungalow on the MGM lot and the gushing “Marion was never lovelier” reviews in the Hearst press. But, let the record show that Hollywood history is littered with the failed careers of mistresses who were promoted as great stars to a public who rejected them. Watch Marion’s films and you can see that her stardom was not a manufactured one.

Twenty year old Marion Davies’ delicate beauty caught the eye of the 54 year old Hearst as she trouped in the 1917 Ziegfeld Follies. Hearst was already married, of course, to another former show girl, who dutifully bore him sons and refused to divorce him, relishing her name and her position in society. At first, Hearst and Marion’s relationship was discreet, but later the liaison became an open secret. In a more decorous time, the press never mentioned their very public life together, nor was it acknowledged in the fan magazines. In the 1930 book, How I Broke Into the Movies, a page signed by Marion advises the aspiring actor, “to come well fortified with stage experience, if possible. It will prove very valuable.”

Marion dutifully starred in the starchy costume dramas her lover preferred, which almost always included a scene of her in pants, because Hearst thought it was sexy. She made modern dress films, too, including the delightful Show People (also directed by Vidor) where she plays an aspiring movie actress allowing her to encounter nearly all her MGM counterparts, Charlie Chaplin, and to disdain “Marion Davies” when she sees her. The Patsy also contains imitations that she usually did for friends, of silent stars Lillian Gish, Mae Murray and Pola Negri. Cosmopolitan Pictures, while thought of as Marion’s private company set up for her by Hearst, in fact, produced many other films. Around the time of The Patsy, Cosmopolitan began the star-making machinery on behalf of Greta Garbo (the company owned the rights to her first two films, The Torrent and The Temptress) and developed Our Dancing Daughters, which made a star of Joan Crawford.

Davies was devoted to Hearst throughout the remainder of his life, living with him all over the world in lavish estates and at his California castle, San Simeon, acting there for all intents and purposes as his wife. When Hearst fell on hard times, she instantly returned all his jewelry to him—a million dollars was real money in the 1930s– so he could raise capital on it. She nursed Hearst through his final illness, but he died when she was asleep in another room. In the morning, his sons had quickly removed his body to return to his wife, and she could not even say goodbye after their 32 years together. 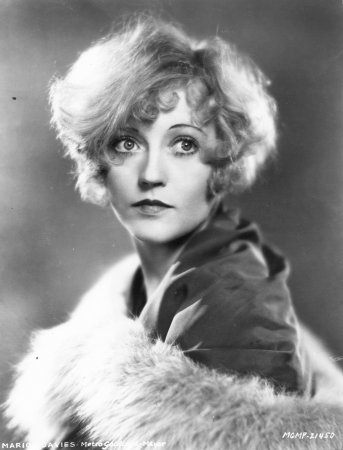 Director King Vidor’s relationship with Hearst and Davies was a warm one. When MGM balked at Vidor’s pacifist WWI drama, The Big Parade, in 1925, Marion sponsored a private screening for industry insiders at her home. Shortly afterwards, it was booked into an important LA theater and was on its way to being one of the silent era’s top grossing films. It was the first movie to show the effect of WWI on the average doughboy, and it made John Gilbert a huge star. Richard Schickel calls Vidor, “the most sophisticated American-born master of the silent film.” Vidor started as a clerk at Universal, submitting stories under an assumed name, because studio employees were forbidden to supply scenarios. Eventually, he was hired as a writer, and went from there to directing shorts and then features. Vidor directed The Patsy immediately after his realist masterpiece, The Crowd. The Crowd was an everyman story, insightful and unadorned (it was the first American film to show a toilet…and the last for a long time, Louis B. Mayer of MGM hit the roof over it) whose affecting naturalism still exerts its influence over contemporary filmmakers. Vidor was a brilliant director who was still working into the 1950s with films like Duel in the Sun and The Fountainhead.

“He (Hearst) wanted to get me to do a film with Marion Davies. And I didn’t want to do one of the films as she had been doing them,–they were all costume pictures, which I had no interest in whatsoever. But, in trying to get me to do a film we worked on Mayer, and Mayer worked on me, and so we went to San Simeon, the Hearst ranch and then I noticed that Marion Davies was a darn good comedienne. Used to entertain people and do imitations of people and she had a great sense of comedy. So Lawrence Stallings and I started discussing the possibilities of Marion as a good comedienne. I don’t know whether she had ever done comedy before, but certainly not the imitations and the clowning the way I had her in the pictures I made.” The Patsy was based on a successful drawing room comedy that had been done a few years earlier with great success on stage. Vidor brings Mack Sennett veterans Marie Dressler and Dell Henderson into the act to provide some rambunctious fun, but in their comical quest for upward mobility reminds us that he has not entirely abandoned his social conscience. 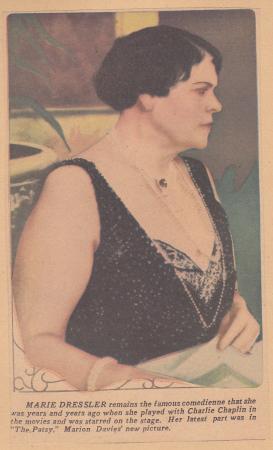 From a 1928 Chicago Tribune movie star scrapbook. “Marie Dressler remains the famous comedienne that she was years and years ago when she played with Charlie Chaplin in the movies and was starred on the stage. Her latest part was in ‘The Patsy,’ Marion Davies’ new picture.”

Marie Dressler had spent 20 years on Broadway as a great comic star, promoting her ungainly body and “the funniest face that the Lord had ever put on human shoulders.” Her first film was the first comic feature, Tillie’s Punctured Romance (1914) based on a character she played on stage, co-starring Mabel Normand and a young Charlie Chaplin. She was acclaimed, one review called the movie “6000 feet of undiluted joy.” Both her film and stage careers waned in the 1920s, and a famous story tells of her eating dinner at the Ritz while planning to commit suicide that night. Director Allan Dwan, coincidentially dining at a nearby table, offered her a job on the spot that literally saved her life. This film dates from the beginning of her comeback. “Davies adored Marie’s performance as her monstrous mother in The Patsy. In a demonstration of her considerable clout, she insisted that none of Marie’s scenes be edited from the final print.” (Kennedy). Dressler’s greatest fame came in the early 1930s, in Garbo’s Anna Christie, Dinner at Eight, and when she won the Oscar for Best Actress opposite Wallace Beery in Min and Bill. When she died in 1934, she was the most beloved movie star of her day. 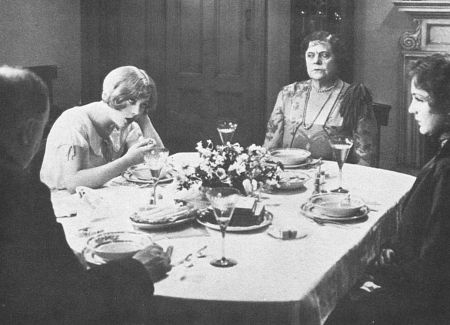 The Patsy is a lively social comedy centered around Davies’ bubbly performance as the put-upon younger sister of Leatrice Joy look-alike Jane Winton. Pat (Davies) and her manipulative mother (Dressler) feud memorably over household chores, beaus and the donning of a chic evening wrap. Even though few in the audience may recognize the source of Davies’ impressions of silent film icons, they still evoke laughter as comic creations of their own. Janine Basinger writes of Davies in Silent Stars: “Although the critics often gave her excellent notices, they never forgave her for the sin of William Randolph Hearst. No doubt many sincerely resented the immorality that Marion represented in those more restrictive years; for many people in the press, as well as in the audience, Marion Davies was a ‘fallen woman.’ The fact that she not only wasn’t suffering for it, but was apparently having a heck of a good time–and becoming a big-time movie star while having it–must have really irritated them.”

Shown with: “Pass the Gravy.” There are many forgotten comedians from the silent era, but that doesn’t mean that they weren’t as funny as the immortals from time to time. When I saw Max Davidson and Spec O’Donnell in “Pass the Gravy” at a film convention earlier this year, I laughed harder than I have in a long time. Davidson, like so many 1920s funny men used ethnic humor, in this case a Jewish character, as a wellspring for laughs. We’re all a bit sensitive about these stereotypes today, but his ribbing is gentle and good-natured, and of course he was Jewish himself. He made over 160 films, starting around 1911 and continuing at least until 1942. He starred in two series of silent short comedies, “Pass the Gravy”, which co-stars Spec O’Donnell (named for his freckles) and Martha Sleeper, who is as funny here as Lucille Ball ever was.

(Portrait of Davies from Jerry Ohlinger’s Movie Material Store. Production still from Baxter. Sources include: Silent Stars by Janine Basinger, King Vidor by John Baxter, A Tree is a Tree by King Vidor, Marion Davies by Lawrence Guiles, “Marion Davies” in Golden Images by Eve Golden, “The Princess and the Showgirl” by Elliott Stein in the Village Voice, Hearst Over Hollywood by Louis Pizzitola, Men Who Made the Movies by Richard Schickel, King Vidor, American by Raymond Durgnat and Scott Simmons, Marie Dressler, a Biography by Matthew Kennedy)