After the fall of the Third Reich, a Nazi official has reinvented himself as a beloved teacher in a Connecticut prep school, courting a judge’s daughter.  As golden autumn darkens into winter, a war crimes investigator dogs his trail.  The only Welles film to make a profit on release, it’s “a grade A gooseflesh raiser” (Time Magazine).

Orson Welles, of the Mercury Theater, the sensational radio adaptation of War of The Worlds and the monumental Citizen Kane was a genius whose reputation was slightly tarnished. His second film as a director, The Magificent Ambersons was recut by the studio, and he was unable to finish his third film as a director, It’s All True.  In debt, as usual, he agreed to  act in The Stranger by its producer, William Goetz.  Welles had enjoyed working with him on Jane Eyre and Tomorrow is Forever, and asked him if he could direct the film, as well.  Afraid of losing a still bankable actor, Goetz agreed, but said he must stay on budget and on schedule, and that if he failed, he would be replaced as director, but would still have to act.  Welles agreed to work within the system as a way of proving himself.  The complete control he had once enjoyed was a thing of the past.  His strict nurse-maiding within the Hollywood mainstream, shorn of what were considered his artistic excesses, made this film a more typical studio product, so much so that its reputation has been seriously underrated over the years.

Orson Welles acted and directed in The Stranger during a period of his life when he was quite politically active.  It was the first commercial film to show concentration camp atrocities, and it warned about the persistence of Fascism after the war.   The original story was written by Victor Travis and the script by Anthony Veiller, Welles and surreptitiously by John Huston, who was in the army and could not officially take credit. Welles contributed all the drugstore checkerboard scenes, and also wrote and shot an extensive introduction to the character, a prelude that took place in South America.  He had envisioned the character as a stand-in for Martin Bormann, a close associate of Hitler who escaped to South American after the war. The film’s editor was a strong believer that there should be nothing in a film that did not advance the plot, in direct opposition to Welles’ philosophy, and Welles fought him “tooth and nail” but he ended up losing the entire South American prelude.  “And I have to this day a deep wound on my leg where I stepped on a baby’s coffin in one of the scenes—the wood cut into my leg—and it always reminds me of what was lost from that movie” (Leaming 312). Editor Ernest Nims would be the focus of Welles’ wrath again, when he recut Touch of Evil.   Welles also wrote the film’s ending, which he considered “Pure Dick Tracy…a straight comic book finish” (Welles 189). 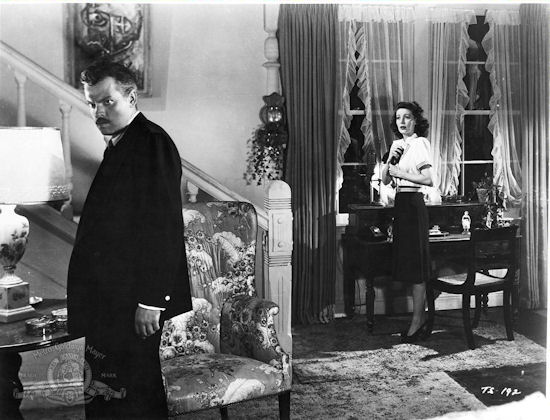 Welles was a committed anti-Fascist before World War II, at a time when Hollywood could be skittish in accusing the Nazis of crimes, in those days before Pearl Harbor. In 1946 he was also writing a column for the New York Post, rhwn a liberal newspaper, and was on ABC radio with a program Orson Welles Commentaries.  In his editorials he protested against the atomic bombs being tested on Bikini Atoll (one of which would bear the image of his by then ex-wife, Rita Hayworth) and kept in the public eye a case of an African American army veteran who was assaulted by police in South Carolina.  Teaming with Edward G. Robinson, another Hollywood anti-Fascist, Welles’ message to the public was clear.  World War II may be over, but injustice lingers.

Welles had the idea to have the Nazi hunter played by Agnes Moorehead. “I thought it would be much more interesting to have a spinster lady on the heels of this Nazi” (Welles 187) but he could not talk anyone into it.  Edward G. Robinson, slowly leaving his gangster roles behind him, was cast instead. He played a similar part in Confessions of a Nazi Spy, and of course it is reminiscent of his role in Double Indemnity, as well. 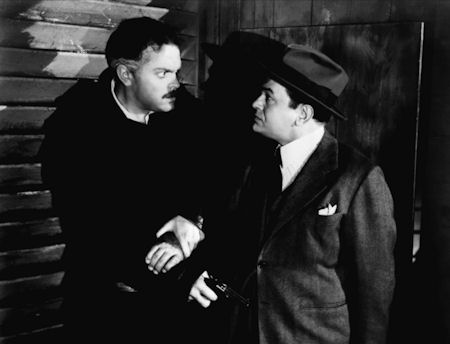 Welles’ shady character is a little sympathetic, which reflects both his skill as an actor, and the script, itself.  “I think most heavies should be played for sympathy. All the good ones in the theater are” (Welles 189). My mother, a dedicated Orson Welles fan, was shocked to see him play a villain.  “Not my Orson!” she remembered thinking.

Ex-Nazi Franz Kindler is in love, not with Mary, but with the idea that he can use her successfully to mask his crimes.  Her warmth is his perfect disguise. On set, Welles made a point of trying to get along with the other actors.  When Robinson protested that he was shooting only his “bad” side, Welles agreed to change his camera angles.  When Loretta Young, a devout Catholic, protested a scene in which she meets Welles’ character outside a church, and decides to skip mass for a walk in the woods, a new scene was added so she could meet him walking her dog on a weekday. 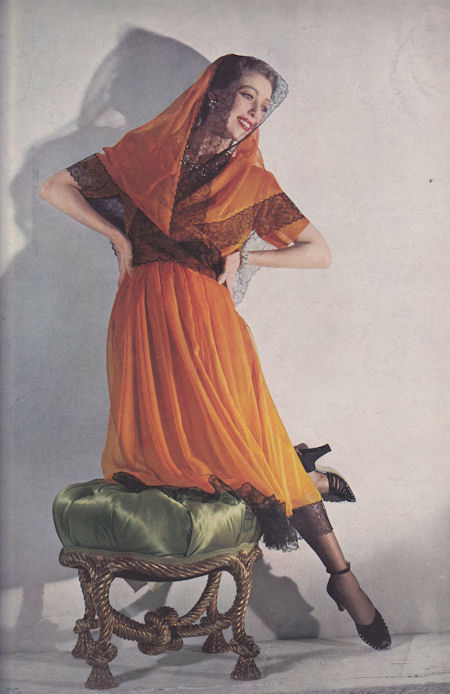 Glamour shot of Loretta Young from a movie star scrapbook of the 1940s.

Perry Ferguson designed a Connecticut village for the film, including a 124 foot clock tower, which, when installed, would create the tallest set built in Hollywood since DW Griffith’s Intolerance.  The clock had been on the Los Angeles County Courthouse prior to 1922.  Stored in the basement of the LA  County Museum, it would be hoisted by 150 foot crane in two sections onto Ferguson’s clock tower. The exterior shots on the tower were not faked, Welles teetered 80 feet up in the air without a net, the crew perilously perched at the same height.  In the days before CGI, Welles made cinematographer Russell Metty stay up all night for a shot of the moon peeking around the clock tower.  One continuous tracking shot took an entire day with Welles and Konstantin Shayne walking in the woods “Yeah I had to be a young man for that, Jesus, that was a physically tough shot—it nearly killed both of us” (Welles 189).

The Stranger came in on time and under budget, but, for whatever reason, did not enhance Welles’ reputation in Hollywood.  Although his cooperation did get him the opportunity to direct The Lady From Shanghai, this is regarded as the least Wellsian of his films, although there are certain unmistakable flourishes. Gone was not only the South American prelude (except for a snippet) but the meet cute outside the church, the full moon rising over the clock tower and likely many other details. What remains are the unmistakable low angle shots, the deep shadow contrasted with bright light, the intense emotion shown in extreme close up. He was demoralized by all his concessions, “I was ready never to act again” (Leaming 315). 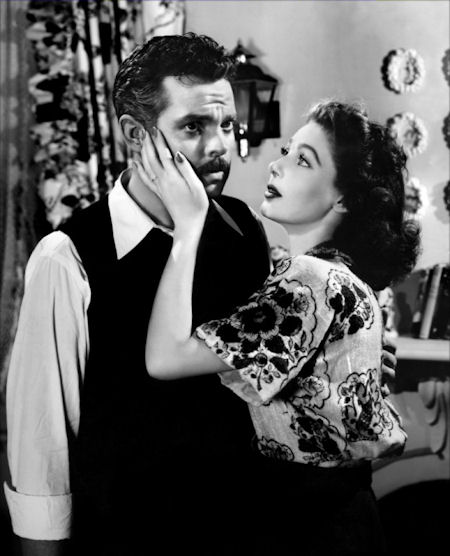 The film with its “disturbing visual milieu using abundant skewed and extremely low camera angles, shadows, smoke, geometric patterns and wonderful elliptical cutting, especially in the film’s finale” marks it as an early film noir (Biesen 203).  Like Gilda and Notorious, also released in 1946, the film trails Nazi war criminals out of Germany, in this case, bringing Fascism to the sun dappled Connecticut woods. James Agee, one of the more thoughtful critics of the day wrote, “Orson Welles’ new movie, The Stranger, is a tidy engaging thriller about a Nazi arch criminal (Mr. Welles) who hides out as a teacher in New England boys’ prep school…in a quite modest way the picture is, merely, much more graceful, intelligent and enjoyable than most other movies…plenty of reason to be glad that Welles is back at work.  Although Mr. Welles takes a reasonable amount of care not to insist on it, The Stranger is an “art” movie” (Biesen 206). 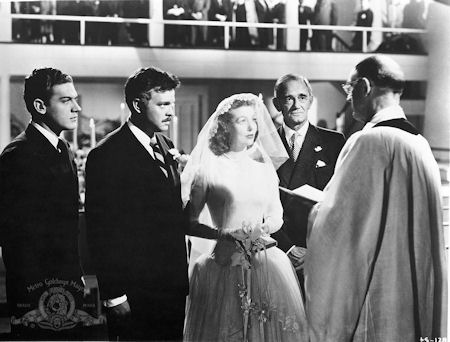 “Once again, Welles is concerned with showing us a particular kind of American innocence that can banish as quickly as the snow from the Rosebud sled when the heat of reality—the knowledge of pain, misery and cruelty—scorches away illusion” (Higham 108).

Unlike the more documentary tone of last week’s film about Nazi infiltration, Went the Day Well, The Stranger relies on the heightened emotions of melodrama to make its case for vigilance as the price of freedom. This film is sweepingly dismissed by Orson Welles scholars, who find it lacking the baroque details of his masterpieces, yet The Stranger is a good, solid film, so full of the vanished pleasures of classic Hollywood cinema, that I feel his blindered biographers have not done him justice.  It’s not Citizen Kane.  But then, what is? 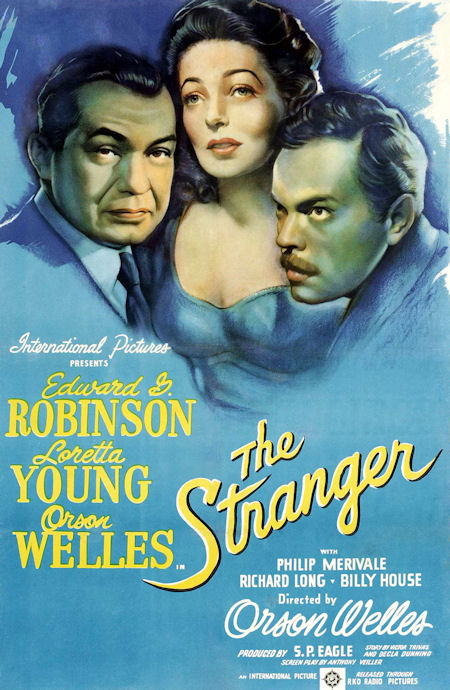