They Made Me a Criminal (1939) Directed by Busby Berkeley. John Garfield, Claude Rains, Gloria Dickson, May Robson, Ann Sheridan (92 min).

A boxer on the lam is enfolded in a surrogate family on an Arizona date farm, and learns to love the Dead End Kids and hard-boiled Gloria Dickson. This is an uncharacteristic non-musical film directed by Busby Berkeley and it is full of the Warners grit, highlighting a brooding performance by John Garfield in his first starring role.

They Made Me a Criminal began life as a play, Sucker, which had already been filmed by Warner Brothers in the Pre-Code era, as The Life of Jimmy Dolan (1933) starring Douglas Fairbanks, Jr., Loretta Young and Guy Kibbee in the parts played by Garfield, Dickson and Rains. The play was co-written by Bertram Millhauser and Beulah Marie Dix, both screenwriters who had been in Hollywood since the teens. Millhauser had written a novel about a fighter named Jimmy Dolan called Hot Leather and collaborated on the play with Dix, a female writer who didn’t care for so-called “women’s pictures” but loved rough and ready action stories. The Life of Jimmy Dolan was Dix’s last credit as a screenwriter. Warners frequently reworked their own properties in this way; after all, even The Maltese Falcon had been made two times in the 1930s before John Huston and Humphrey Bogart got it right.

This version of Sucker would feature Warner Brothers new star, John Garfield. Garfield was born Jacob (Julius) Garfinkle on the Lower East Side of New York. Young “Julie” hung with the neighborhood gangs and later said he learned “all the meanness, all the toughness, it’s possible for kids of that age to acquire” (Roman). He was kicked out of several schools and his rebellious nature seemed to be inclining him towards a life of crime. Fortuitously, he was placed in a school run by a noted child psychologist, who insisted on the improvement of his circumstances at home (he was sleeping on a bed without a mattress or blanket) and put him in a drama class to cure his stutter. The theater was a revelation to him, and after a series of small parts and odd jobs, playwright Clifford Odets recommended him to the Group Theater in New York. Garfield said later, “It was the height of my ambition, I sometimes think that nothing so good happened to me before or afterwards.” (Roman). After starring in Odets’ Awake and Sing about the yearning of a slum kid to escape his opressive enviroment, his career was made. But, after being passed over for the lead in Golden Boy, a play about a boxer that Odets had expressly written for him, Garfield bolted from the New York theater and signed a contract in Hollywood with Warner Brothers.

His first film role was essentially a featured part in the soap opera-ish Four Daughters, which told the tales of four blandly attractive young women (three played by actual sisters, Priscilla, Rosemary and Lola Lane, with Gale Page) their sweet little romances, and their warm relationship with their musical pater familias, played by Claude Rains. “Into a household of sentimental, musical young women—presided over by a genial musician father in a bucolic suburban setting, with various suitable swains hovering about—comes the electrifying dark presence of Garfield’s doomed orchestrator, thick black hair curling over his forehead, his eyes half lidded by the weight of despair. He was the sort of man whose untapped genius needed only the right woman to kindle his self-esteem, and audience reaction suggested that many young women imagined themselves as candidates.” (Sklar). Four Daughters‘ director was Michael Curtiz, probably because at one point Errol Flynn was to star, and Curtiz had recently directed him in The Adventures of Robin Hood. Curtiz generously gave Garfield beautifully lit, lengthy close-ups during his brooding monologues, and wreathed in cigarette smoke, rumpled as if he’d just gotten out of bed, Garfield’s jolt of charismatic lightening propelled him into a Best Supporting Actor Oscar nomination for his first screen role. 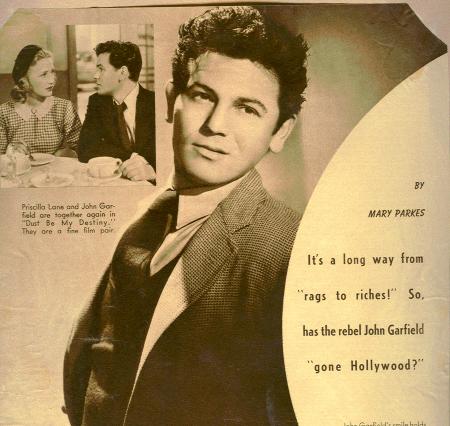 “John Garfield’s smile holds a sadness for the human race. His wife calls it ‘Julie’s orphan look’ and it dates back to his childhood and accounts for his sense of pathos.” The article is called “Little Orphan Julie” which acknowledges his real (Jewish) name.

Warners had hired Garfield to be a younger version of James Cagney, one of their biggest stars, but his sexy vulnerability made him a different kind of tough guy. They Made Me a Criminal was Garfield’s first starring role, and he made the most of it, getting extraordinarily positive reviews. A writer in the New Yorker saw him as reflecting the plight of those young men who had come of age knowing nothing but the Depression, “I thought there was some discretion and common sense in his toughness. There is nothing noisy, stagy or showy about him. One can find hundreds along Sixth Avenue, spelling out the signs in front of the employment agencies.” (Sklar). Garfield had been a Golden Gloves boxer, and the fight scenes, photographed by James Wong Howe, have a gritty reality.

Claude Rains did not want to play the part of the disgraced police detective, feeling he was terribly miscast. But Warners wanted their hot new leading man to have the best support possible, and that meant contract player Rains. This was one of six films Rains made in 1939, his loan-out to Columbia for Mr. Smith Goes to Washington would garner him an Oscar nomination and begin the era of many of his great character roles at WB.

Rains was a Cockney who left school at 11. His accent, a stutter, and an inability to pronounce the letter “r” would seem to be a handicap for someone who wished to be an actor, but a stint as a boy soprano in a church choir led to his becoming a call boy in the theater and then going on the stage. He served in WWI and was gassed in the trenches, resulting in nearly total blindness in his right eye. His vocal chords were temporarily paralyzed, which contributed, in part, to his distinctive voice. He made his screen debut in The Invisible Man for director James Whale at Universal Studios, where his face was not seen until the final moments of the film. Warners signed him to a long term contract in 1936, where his most prominent role up until this film had been Prince John in Errol Flynn’s rousing The Adventures of Robin Hood.

The Dead End Kids, Leo Gorcey, Hunz Hall, Billy Halop, Gabriel Dell, Bernard Punsley and Bobby Jordan made many films as a team, beginning with Dead End, which gave them their collective identity. Renamed the Bowery Boys, they continued to act together until they were quite long in the tooth, in a series of increasing horrible B picture comedies which used to be a staple of afternoon tv in Cleveland OH in pre-cable days. Billy Halop has the biggest role here, as the heroine’s needy brother, and his ardent attachment to Garfield’s character seems to exceed an adolescent hero worship. 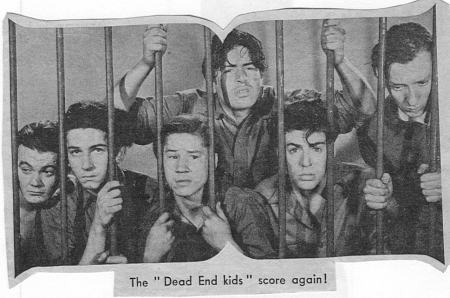 In hindsight, it seems a horrible waste to have cast Ann Sheridan in the small part as Garfield’s girlfriend at the beginning of the film and given the heroine’s role to the unmemorable Gloria Dickson. Dickson made 23 mostly B pictures before dying in a house fire at the age of 29. Sheridan, described by one biographer (Bubbeo) as a “hash house Carole Lombard” has a lot more spunk. Clara Lou Sheridan from Denton TX won a trip to Hollywood when her sister sent a photo to a Search for Beauty contest. Renamed Ann, she stayed on determinedly as a bit player after her contest prize expired. She was signed at Warners the same year as Rains, 1936, and her career languished until some sexy Hurrell pin-up photos came out the year of this film and the studio restyled her, somewhat cryptically, as the Oomph Girl. Sheridan was embarrassed by the publicity, until Paul Muni advised her to use her notoriety to pressure the studio for better parts. Not an actress preoccupied with her appearance, she used to tell the make up person, “come over here and put a little oomph on me.” 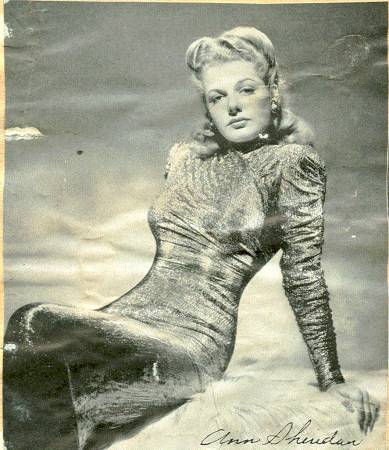 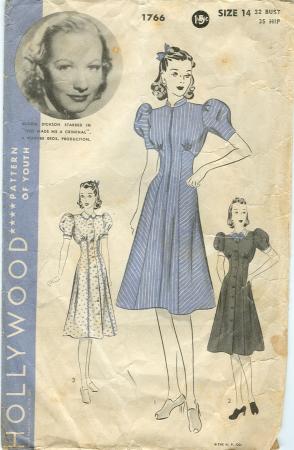 Berkeley seems an odd choice to direct this film, which allows him few opportunities to share his peculiar gift as the choreographer of extravagant musical numbers. He was always particularly proud of the non-musical films that he directed. His skill is most apparent in the unusual water tank set piece, which provides the most tension-filled scene. At one point, as an “in joke” he has Hunz Hall sing the theme of one of his signature dance pieces, “By a Waterfall” from Footlight Parade, although it should be noted that Warner Brothers frequently cross-promoted their films in this way.

Warner Brothers films have a certain texture that instantly sets this studio’s product apart from films of this or any other era. The quality of the photography, the music, sets and costumes and dialogue, and the toughness of the actors comes across beautifully in They Made Me a Criminal.