Garbo is incandescent in her first American film, as a village lass transformed into a jaded prima donna with a penchant for fur trimmed evening wraps.  Based on a popular novel by Blasco Ibáñez, and drenched with MGM’s glossy romanticism, you’ll see a star blaze to life on screen as an imperious diva struggles with her passion for a mama’s boy with bedroom eyes.  Silent film with live music by David Drazin.  Print from George Eastman House.

Vicente Blasco Ibáñez was a popular author writing in Spanish in the early 20th century, whose works were the source for several popular silent movies.  He was born in Valencia, Spain, and was a journalist, he wrote his first novel in 1892.  Influenced by Emile Zola, he wrote in a naturalistic style, and was interested in the intersection of nature, nurture and social and political conditions.  Entre Naranjos (Between the Orange Trees, written in 1900) was an example of  this measured style.  Later, his plotting became more eventful, and Hollywood came calling, particularly for two Rudoph Valentino movies, The Four Horsemen of the Apocalypse (a WW I drama which made Valentino a star) and the bullfighting story, Blood and Sand.  Rex Ingram, who directed the Four Horsemen, also filmed Ibáñez’ Mare Nostrum, an espionage story. Two of Garbo’s earliest silents, tonight’s film and The Temptress were based on his works. 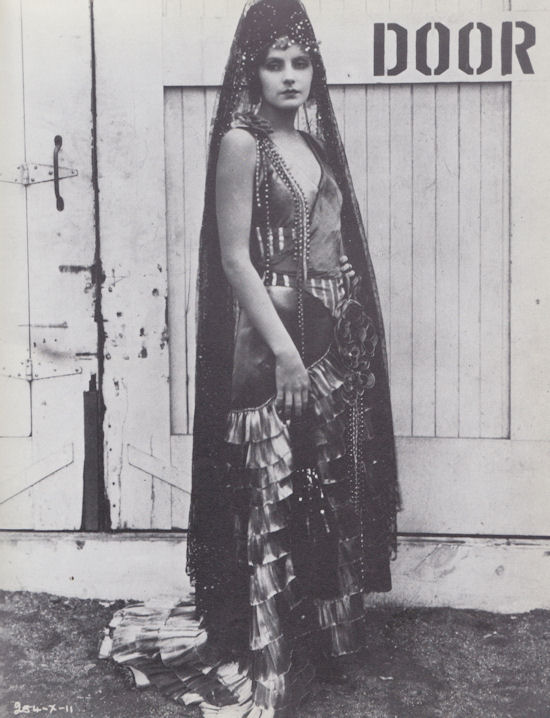 The copy of Entre Naranjos I took out of the Duke Library had a charge slip that said it had last been taken out in 1943.  Although I can’t confirm this, it is an indication of how far his works have fallen in favor.  Entre Naranjos does bear somewhat of a resemblance to the film, with a considerable timeline alteration.  On screen, the lovers had a youthful relationship denied by the boy’s mother.  In the novel, they meet as adults, thanks to the torrent of the title. 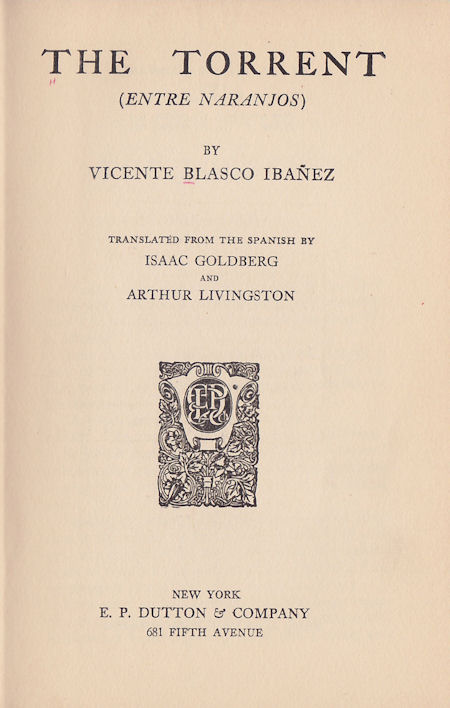 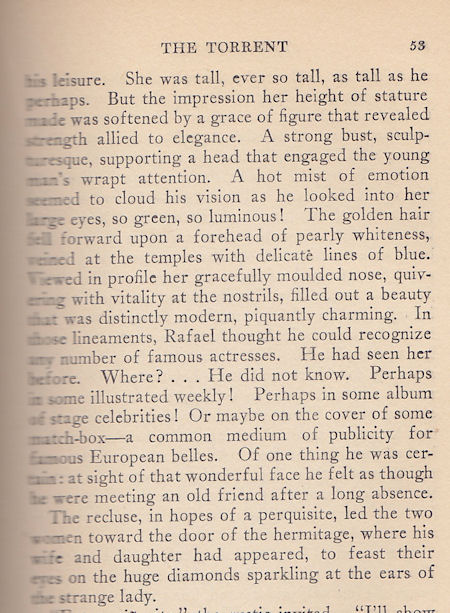 Coincidentally, we are showing Greta Garbo’s first Hollywood film, and, next month, her last success, Ninotchka. Greta Gustafsson was the third child of a low paid day laborer and his wife, a kitchen maid.  Her father died when she was 14, and she was already working as a lather girl in a barber shop.  At fifteen, she started in the millinery section of a large department store, and was soon modelling hats, which led to acting in some short advertising films.  She auditioned for and got a place in the Academy of the Royal Dramatic Theater, and soon after was sent for an audition for the man who would become her mentor, director Mauritz Stiller.  She had a pivotal role in The Saga of Gosta Berling and then  in Pabst’s The Joyless Street, in Germany, two important European silent films.

Gosta Berling is an epic film directed by Mauritz Stiller, in many ways the culmination of the Swedish silent cinema.   Lars Hansen plays the title role, a defrocked minister living on an estate with various rogues, n’eer do wells and drunkards, courtesy of the roistering lady of the estate, who calls them her knights.  Garbo arrives as the wife of a local nobleman, but she was Gosta’s first love, when he was her tutor in her native Italy.  Garbo and Hansen leap off the screen as they burn and pine for one another.  Stiller’s direction is masterful, including one mind blowing scene in which a horse drawn sledge carrying Gosta and his love is chased across a frozen lake by a pack of ravening wolves.

MGM’s Louis B Mayer had come to Europe to hire Lars Hansen to co-star with Lillian Gish in The Scarlet Letter, and wooed the director to come to Hollywood as well. He insisted that his protégée was part of the deal.  After waiting endlessly for Stiller to negotiate his contract to direct The Temptress, also by Blasco Ibáñez  which would become her second film,  MGM decided Garbo would first star in Ibáñez’ Torrent, a big budget, $250,000 film under William Randolph Hearst’s Cosmopolitan insignia, and Monta Bell, not Stiller would direct her.  Stiller was disappointed, but it was the screen test he directed of her that caught the studio’s attention, and so he urged Garbo to accept this prestigious assignment with another director. 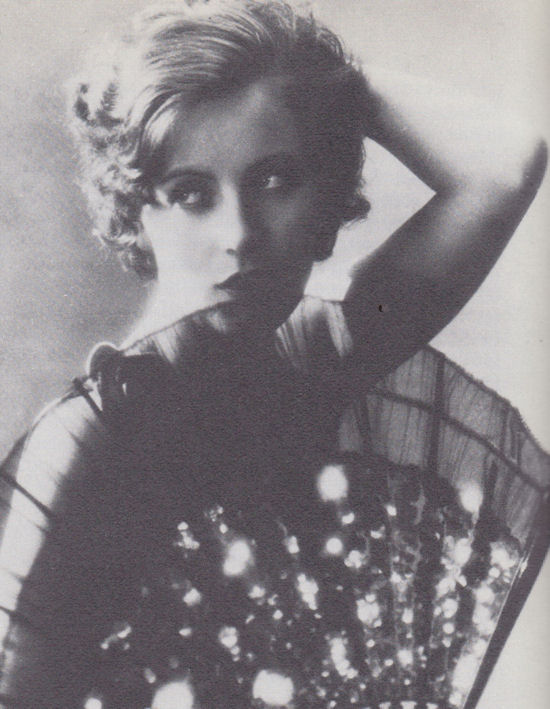 She had already been photographed many times, first by Arnold Genthe (one of his photos appeared in Vanity Fair before she made a single American film) by Russell Ball, and finally by Ruth Harriet Louise.  Louise seemed to sense something essential in what would become Garbo’s onscreen image, “There is no seductiveness here, and Louise seems to recognize Garbo’s essential clarity and lack of vulgarity” (Dance and Robertson 165).  In her first two films she became a Latin seductress, with elaborate costumes and hair styles, it was a way for MGM to sexualize her “foreign” image.  The studio wanted to typecast her as a vamp, something completely opposite to Garbo’s real character.  Louise also did a series of dual portraits of Garbo and her co-star, Cortez, together, in which they acted out a sensual drama inspired by the film.  “Garbo is, in these photos, that peculiar mix of desire and reticence, erotic energy and ennui,  that enabled her to ‘seduce husbands by the hundreds’” Another portrait session of Garbo alone had her posing in her dramatic wardrobe, including the striped fur-trimmed wrap from the film. 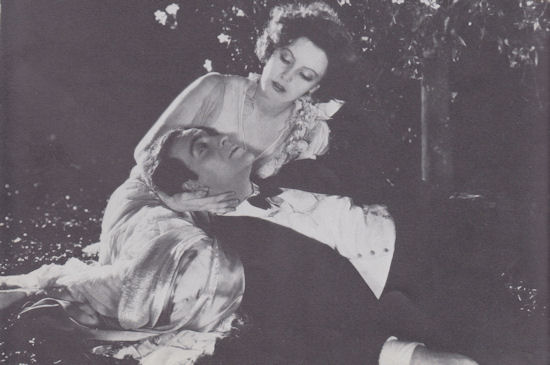 The adaptation by Dorothy Farnum (many early screenwriters were female) summarized the plot, “to tell the story of a Woman of Destiny, a creature born to shine as a star to be the light of all men—but out of the reach of any one” (Swenson 94).
Garbo’s grasp of English was still tentative, and the studio assigned her an aspiring Swedish actor as an interpreter.  Sven-Hugo Borg arrived as she was starting her make-up and wardrobe tests.  For the first and last time, she allowed her hair to be dyed black, since she was playing a Spanish diva. When Borg arrived, Garbo was clinging fearfully to Stiller.  “As I came up, she was saying to Stiller, in Swedish, ‘Oh, Mauritz, it’s so terrible and confusing!  What am I to do? What do all these people talk about?’ I was introduced to both Stiller and Garbo and, with a smile, he said to her, ‘Here is a man who has nothing to do except tell you what they talk about…’” (Swenson 94). 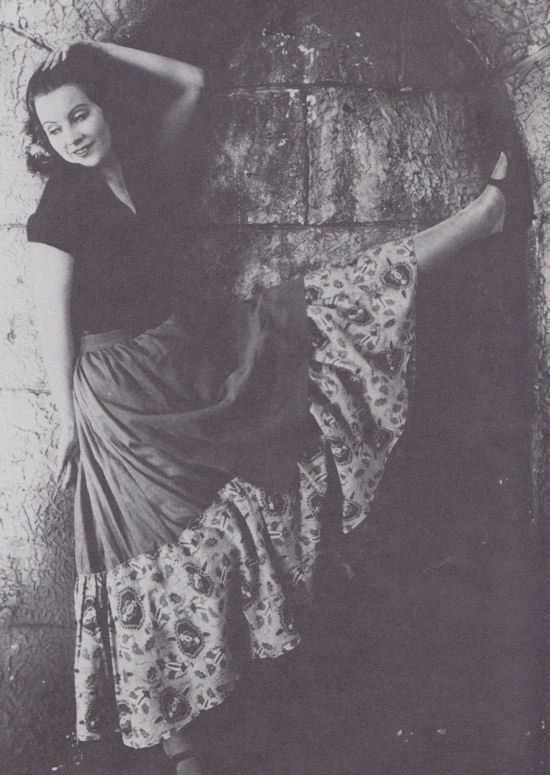 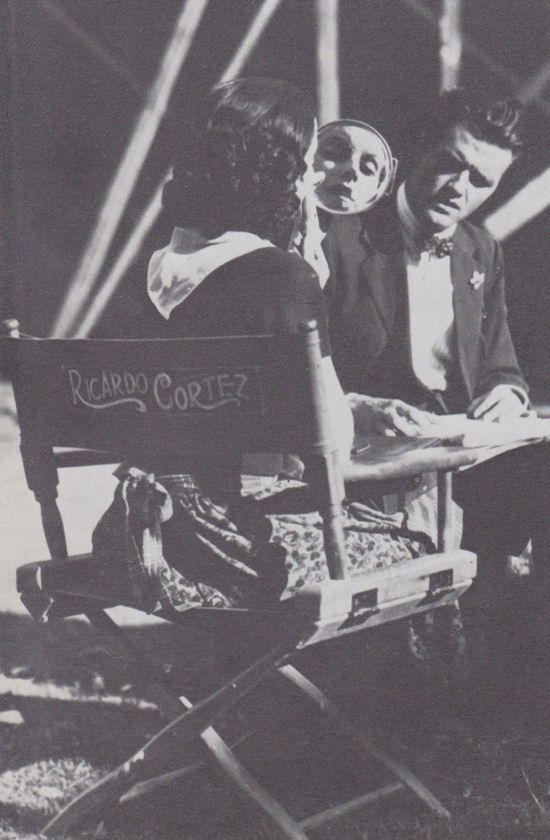 Garbo on set with Hugo Borg.

She began her first American film with a kind of grim resignation. Borg said, “Without the guiding hand of Stiller, she was lost…’Borg, Borg do something’ she would plead, wringing her hands. ’Make them let me have Mauritz. Why won’t they let me have Mauritz?’” (Swenson 95).  Sadly, Stiller’s genius was cloaked by an irascible temper, he fought endlessly with studio executives, and he would soon return to Sweden, where he died, tragically young.

Rudolph Valentino, in a couple of other Ibáñez sourced works, had created a craze for the so-called Latin Lover, and one would be required for this film, too.  One of the many pretenders to Valentino’s throne was Jacob Krantz of the Lower East Side of New York City, recently renamed Ricardo Cortez. They did not get along, in part because Garbo had replaced Aileen Pringle, and then Cortez’ girlfriend, Alma Rubens, the latter would soon become his wife.  Garbo and Cortez only spoke when necessary, and he became increasingly annoyed at the interest of the front office in her career, not his.  After a drenching studio rainstorm, Cortez even appropriated the blankets Borg had been holding for Garbo.  “Let him have them” she said, “You mustn’t let yourself be bothered by a pumpkin like that” (Swenson 96). 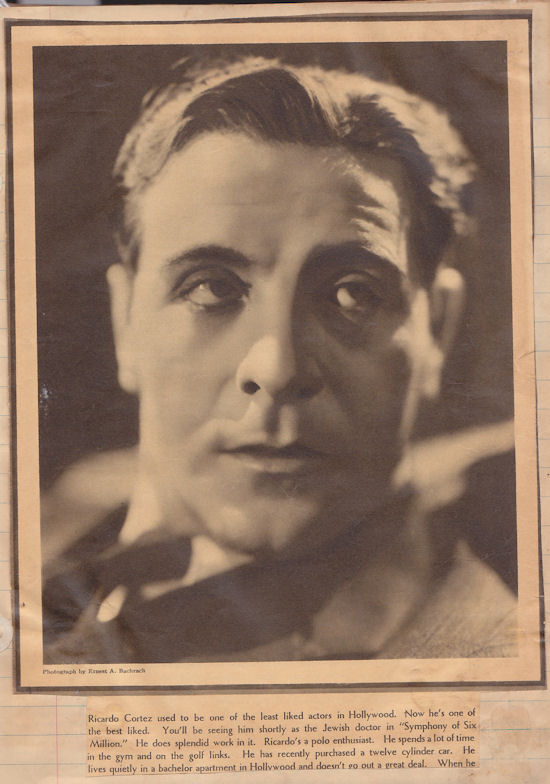 From a 1931 movie star scrapbook. Cortez career got a boost in the talkie era, he often played gangsters and even Sam Spade in an early version of The Maltese Falcon

Although Garbo’s on screen image is closely associated with the wardrobe created for her by Adrian, he did not arrive at MGM until 1929.  The clothes for Torrent were designed by (Clement) Andre-Ani, along with Maude Marsh and Kathleen Kay, society dressmakers who arrived at the behest of Mae Murray.  Max Rée, a theatrical designer who had worked with Max Reinhardt in Berlin and on Broadway,  joined the team in 1926.  Apparently it is impossible to ascertain who did what on the film (at least until a researcher digs deeply into the MGM archives) except that Ree was given the credit for “Garbo’s mammoth, neck concealing fur coat” (Chierichetti 12).  All of these designers only worked for a year and a half at the studio. 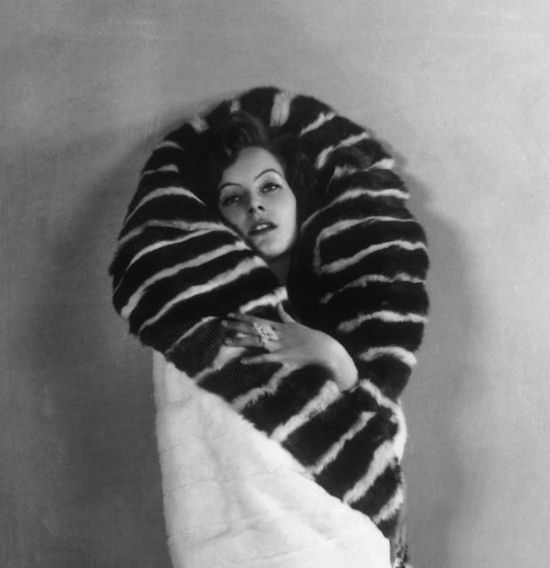 Three days before the film’s premiere, the Hearst papers featured Garbo’s wardrobe as a central marketing focus of the film, “in what has been regarded as one of the most elaborate wardrobes ever assembled for a screen star. The wardrobe will be worn by Greta Garbo, noted Swedish star of Ibáñez’ Torrent.  As an opera star in the picture, Miss Garbo will be shown in triumphs in Paris, Milan and Madrid.  Max Rée, famous Danish costume creator, outfitted her” (Gutner 71).  Her gowns were meant to reflect many moods, as the studio mulled over how they wished to tailor her image.  One early critic wrote, “Miss Garbo, as it happens is dark, beautiful, and rather exhilarating to look upon…a separate and distinct being, quite unlike anything else on earth.  Once seen, she will not soon be forgotten” (Gutner 72).  She didn’t simper or slink, she strode masterfully across the screen in her electrifying attire.  And, Ricardo Cortez would acquiesce to her dominant love making, which would be repeated in many of her subsequent films. André-Ani said of the star, “Garbo has foreign ideas about clothes that do not go well in American pictures.  And, her figure—it is difficult to dress” (Landis 60). Not to mention the fact that she hated fittings, and in her personal life eschewed  frippery. The ensembles that captivate on screen today made a different impression on some. Columnist Joseph Alsop wrote in 1935, “Miss Garbo was clothed in a series of the most improbably hideous garments conceivable by the human mind” (Bainbridge 94). 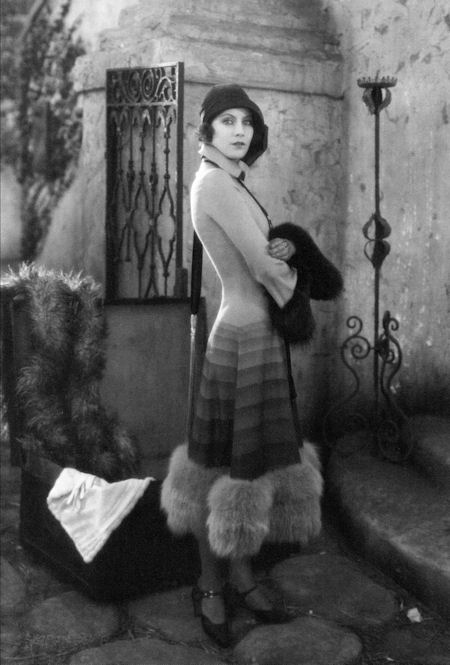 Her biographer observed, “Just as Greta Gustafsson’s face had habitually followed the sun in Sweden, Greta Garbo turned into the  light of the MGM dream factory and became someone else.  Although in many of her early productions she acted in Swedish (title cards would take care of the language difference) what Garbo radiated was universal.  ‘I’ve been down watching that new girl work one screenwriter told a journalist.  ‘I don’t know what it is that she has, but I do know that everyone on the lot who can get a way for a few moments from whatever he is supposed to be doing goes to watch her. There is a stillness about her, a power” (Swenson 96). The film was shot quickly, in just 4 weeks, which Garbo found nerve wracking.

Cinematographer William Daniels photographed her with great sensitivity.  She had long eyelashes, and he lit her from above, casting the shadow of her lashing on her cheeks, which became part of her image.  The studio was excited about her debut, even if her Swedish friends in Hollywood were pessimistic.  But, they did not view her debut the way the public did.  The love scenes, in which she took the dominant position over her lover created a sensation, they were quite racy in the 20s and nobody else would have dared.  The critics raved about her, Variety said she was “the find of the year. This girl has everything, with looks, acting ability and personality” (Swenson 99).

David Drazin’s score for the film was exceptional. He incorporated two compositions by Enrique Granados, particularly Andaluza (for which we have a fondness, because our mother used to play it) to great effect. The torrential storm of the title shook the rafters. The audience responded with great enthusiasm to his score, and to the delightfully shocking modernity of the plot. As well as watching a star being born on screen. 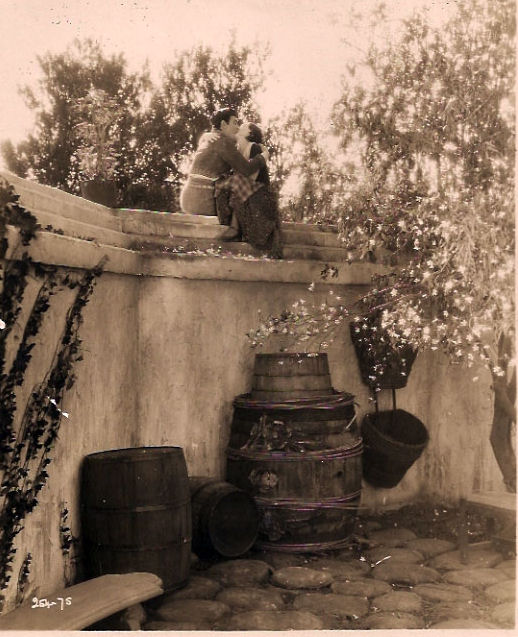