Bordertown corruption sabotages the honeymoon of a Mexican narcotics officer in Welles’ last masterpiece. Beginning with a legendary tracking shot of a car rigged with explosives, Touch of Evil is a ticking time bomb of moral ambiguity. “A wild masterpiece, a sleazy, grimy, jittery and ultimately dazzling work of cinematic magic” (Seattle Weekly).

Touch of Evil is considered by some to be the end of an era—the end of Orson Welles’ masterpieces, and the last of the true films noir. It was also the last film Welles would direct in Hollywood. The first time I saw it, I found it rather confusing, not knowing that the studio had edited it into a form that they felt was more commercial, even though it obscured not just what was going on, but Welles’ as always, dazzling visions.

One story goes that Welles got along so well with the producer Albert Zugsmith, for whom he was acting in a Universal film, that when he said he’d like to direct a film again, and Zugsmith offered him his pick of studio owned scripts. Welles asked, “Which is the worst one?” Or, maybe he was just asked to play the villain in Badge of Evil.

Universal was trying to get Charlton Heston, who had just played Moses in The Ten Commandments, for the lead.  He hesitated. “It’s a good enough script, but police stories, like Westerns and war stories have been so overdone that it really depends on who is going to direct it” (213 Comito).  Who was the director going to be ?  No director yet, but Orson Welles is playing the heavy.  Heston supposedly said, “You know, Orson Welles is a pretty good director” and Universal agreed. (Thomson 335). Welles would receive a salary of $125,000 to act, direct, and if he wanted to, rewrite the script. 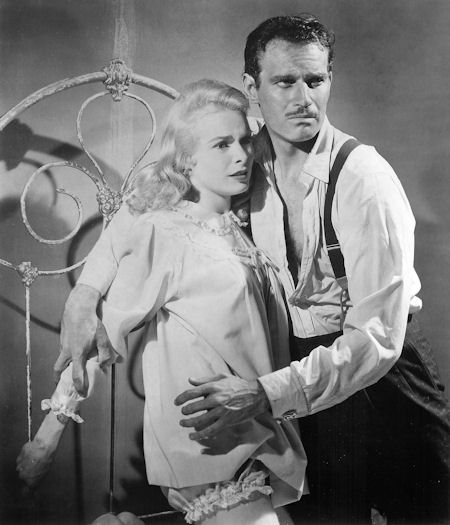 Welles did not disdain the trashy origin of the material, a novel by Wade and Miller. Part of the classic crime story structure is beginning with an act of violence that must be resolved by the protagonists.  Welles kept this beginning, and with his famous three minute plus tracking shot, makes the tension taut and suspenseful.  His most masterful contribution was to make the entire film a meditation on cross-border American racism, and to create a monstrous protagonist, played by himself, repellent in every detail.

The script for Badge of Evil was written by Paul Monash, and Welles rewrote, focusing the script more on Hank Quinlan, his corrupt cop, and embellishing Monash’s strong structure.  One major change was that Mitch Holt, the narcotics cop had a Mexican wife, and Welles made Miguel Vargas a Mexican detective with a blonde American wife. Heston put on makeup to play Miguel Vargas, and while the brownface may make us cringe a bit, it was definitely not a stereotype of the sleepy sombrero variety.  Mike Vargas is a real, three dimensional character. Welles also transposed it to a US Mexican border town (shot in seedy Venice, California).

Welles, already over 300 pounds, donned even more padding, changed his hairline and added a fake nose.  The makeup was supposed to be a visual representation of Quinlan’s soul-deep corruption, and he looks sweaty, and unwashed, almost as if he is rotting from within. He said of his character, “It’s a mistake to think that Quinlan finds any favor in my eyes.  To me, he’s hateful.  There’s no ambiguity in his character.  He’s not a genius, he’s master of his field, a provincial master, but a detestable man. The most personal thing I have put in this film is my hatred of the abuse of police power…So this is the angle from which you have to understand the film: whatever Vargas says, he says as my mouthpiece.  It’s better to see a murderer go free than for a policeman to abuse his power” (Comito 204-5). 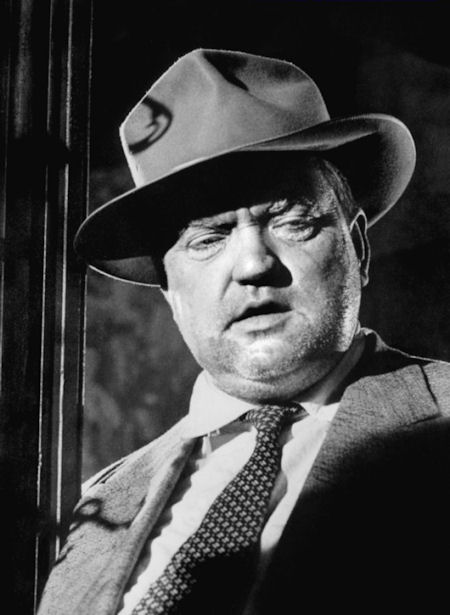 Welles collaborated with an old cinematographer friend, Russell Metty.  They planned to can shots as quickly as possible so he would be ahead of schedule, and let him do as he wished afterwards. Shooting in Venice, mostly at night, meant that studio brass would not be looking over his shoulders. He loved letting the actors improvise.  Janet Leigh compared him to Hitchcock, for whom she would shortly make Psycho, “With Mr. Hitchcock the picture is over for him before he starts shooting” (Leaming 421).  Leigh had recently broken her arm, but Welles did not find this to be a problem.  He hid it in shots where he could, and in one scene had her cast sawed off, and replaced after shooting.  Welles didn’t care about the storyboarding.  If a little more continuity was needed, he would loop dialogue in post-production to explain it all.

Heston spoke of working with Welles, “He’s exciting. He makes it fun…Film acting is often not very interesting.  Even if you have a fascinating part with four or five major scenes, which is unusual, those scenes don’t take up half the running time of the film, or the shooting time, either…Orson has the capacity as a director to somehow persuade you that each time is indeed the most important day in the picture, and that’s kind of marvelous and I applaud it” (Comito 216).  Welles felt the same way about Heston, “He’s the nicest man to work with that ever lived in the movies” (Welles and Bogdanovich 304).

The long tracking shot over the titles is justifiably famous, a tense and riveting beginning of the film, but there are less flashy, but equally bravura moments, like when Quinlan “finds” the shoe box full of evidence in an apartment.  The shot threaded through two rooms, a closet and a bathroom, with 13 pages of dialogue.  The tracking was intricate, but so deftly done, that it’s hard to realize it’s a single take. When this first shot for the film, was completed, Welles was–intentionally–two days ahead of schedule, which reassured the studio of his work ethic. 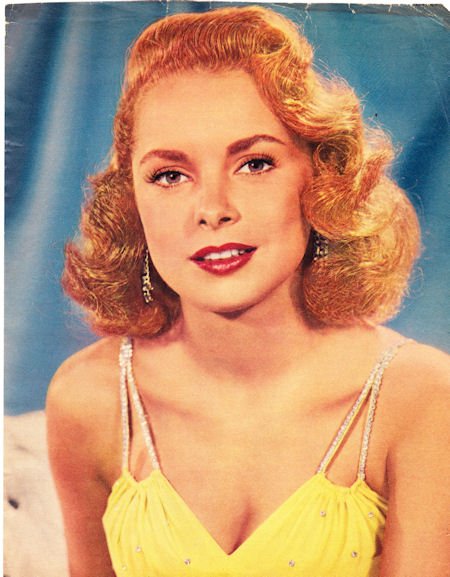 He called in a few friends for favors on the spur of the moment, including Marlene Dietrich.  The studio was quite surprised to see Miss Dietrich in the rushes, in a costume and makeup she devised herself, since they were not paying for her.

Universal was enthusiastic about the bizarre look of the film, and “was consistently emphatic in their approval.  It’s murky, low-key lighting, its tortuous long takes, it eccentric camera angles and pictorial compositions—these posed no problem for the boys in the front office, who were seriously talking about signing Orson to do another five pictures for Universal” (Leaming 425). Welles finished his cut, presented it to the studio and left Hollywood, a miscalculation he had made before.  Not being present for the studio screening of the film turned out to be one of the worst mistakes of his career.  The studio panicked when they saw his cut, and he was not there to defend his work.

Universal decided the story, which was a crime melodrama at its heart, needed more straightforward storytelling.  They cut about 15 minutes, and had a studio director film a few scenes that would help explain things for the audience. Both Heston and Leigh refused, out of loyalty to their director to participate, until it was pointed out that their contracts demanded it.  And, Welles raged, overtaken again by “that old haughty self-destructiveness.”  Charlton Heston said, “You can’t leave a studio holding an unfinished film, surely not without talking to them.  Orson had an odd blind spot.  He was infinitely charming with his crew and actors but I’ve seen him deliberately insult studio heads.  Very dumb.  Those are the guys with the money.  If they won’t give you any, you don’t get to make many movies.” (Both quotes, Thomson 344). 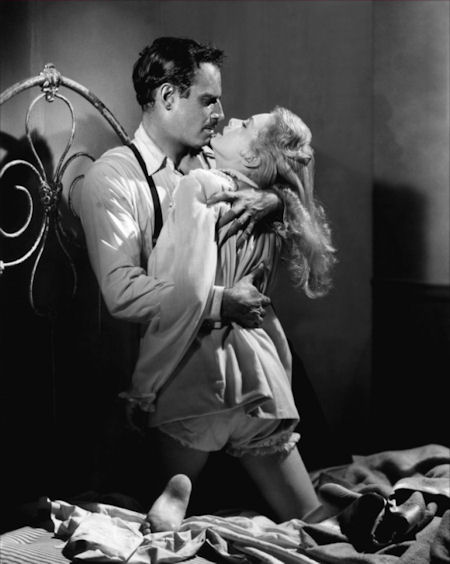 Universal didn’t know what to do with it.  There were 19 different plans to advertise and promote the film, one of which made it seem like a white slavery exploitation film.  In many places it opened as the bottom half a double feature, with The Female Animal, Hedy Lamarr’s last film, at the top of the bill.  In some cities, it only played drive-ins. But, American reviewers began to praise it, and European critics, like young Francois Truffaut, thought it was superb, that it should have been the American entry at that year’s Cannes Film Festival. “Welles is a poet. I warmly recommend to you the films of poets” (Truffaut 289).

In 1998 film archivist Rick Schmidlin released a version of Touch of Evil re-edited to Welles’ specifications. He had planned to release a deluxe laserdisc (!) version of the film, and realized that Welles had written a 58 page memo to Universal with directions on how to re-edit his film. Lew Wasserman, the former chairman of Universal Studios located a copy of the memo for Schmidlin to use in his reconstruction. Welles wrote the memo after leaving the film in the studio’s hands while he went to New York to appear on a tv talk show, and then began acting in The Long, Hot Summer.  When he saw the version of his film editied “for clarity” as I suspect the studio argued, and with the pick-up scenes added in by another director he wrote the memo, afraid that the history of The Magnificent Ambersons was about to repeat itself. “Yes, and on TOUCH OF EVIL Welles was at the top of his bent. He was 42 years old, in top form and everything he did with this film was virtuoso. Virtuoso directing, virtuoso camerawork, virtuoso editing. He was right on the money in everything he was doing “ (wellesnet.com). The editor who was assigned to the film, Ernest Nims, felt he was doing Welles a big favor by trying to deliver a more commercial film.  But, that had been Welles’ intention all along.  His memo contained instructions on how to polish the finished film so it would become a box office hit.

The most dramatic change was that the opening sequence, the way the film was originally released, had the credits rolling over it.  Luckily, because in other countries the film would be released with titles in different languages, there was a version without the titles, and they were able to find the sound elements, not just the version with Henry Mancini’s music over the scene.  Schmidlin and his editor, Walter Murch, began with the memo, but also used Welles original script, the original editor’s script, cue sheets, continuity reports and production reports. Both Charlton Heston and Janet Leigh worked to promote the theatrical re-release of the film, finally conforming to Welles’ original vision.

Rosebud by David Thomson, Orson Welles by Barbara Leaming, Touch of Evil, Orson Welles Director edited by Terry Comito, This is Orson Welles by Orson Welles and Peter Bogdanovich, The Films in My Life by Francois Truffaut,
http://www.wellesnet.com/?p=290 interview of Rich Schmidlin by Lawrence French.