In the two second gap between when the juice flows to the electric chair and John Allen fries, he relives his tragic entanglement with a conniving floozie. A great Warner Brothers Pre-Code melodrama feeds us the raw meat of the Great Depression “This is Robinson, great American actor, in the most intense minutes of his film career” (Mick La Salle).

Films from the Warner Brothers Studio in the early 1930s are unlike any others in cinema history. Made on the cheap…you can see the same cast of characters, the same sets, and sometimes even the same costumes in one film after another…they are swift and fresh, hard hitting and uncompromising. Filmed before the Production Code enforced censorship (beginning in mid-1934) they deal with crime, sex and desperation in post-Crash America. This rarely screened gem about a high steel construction worker and his descent into a maelstrom of his own making moves quickly from its tragic premise to its unforgettable conclusion.

Edward G. Robinson exploded onto the screen as the gangster Little Caesar in 1931. Although the film may seem slowly paced to modern eyes, Robinson’s performance, as a criminal slaughtering his way up the ladder of success, is still scintillating. He was directed in Little Caesar, Two Seconds and in the razor-sharp expose of muckraking tabloid journalism, Five Star Final, by young Mervyn Le Roy. They must have had an extraordinary rapport to make three such different films in a short period of time, each in its own way unforgettable.

He was born Emmanuel Goldenberg in Bucharest, Rumania, in 1893 and arrived in the US when he was nine. His propensity for being on stage revealed itself early when young Manny gave what was considered to be the longest Bar Mitzvah speech in the history of his Lower East Side synagogue. He was drawn to acting soon after, and studied at the American Academy of Dramatic Arts in NYC. He was encouraged to change his name and chose Edward G. Robinson, keeping his initials and adding the de rigueur Anglo-Saxon surname. He honed his craft in stock, but in looking for jobs in New York in the ‘teens remarked, “In those days I would go for an interview and find myself competing with this other chap who would always be younger and taller, and much handsomer than I. I would recognize immediately that the producer wasn’t particularly sympathetic and I learned to say, out of intuition, ‘I know I’m not much on face value, but when it comes to stage value, I’ll deliver for you’” (Parish).

Robinson worked steadily on Broadway throughout the 1920s, and made his first talkie (he’d been in one silent film) at Paramount’s Astoria studio in New York. Irving Thalberg of MGM brought him to Hollywood in 1930 and he stayed, eventually signing a contract with Warner Brothers, who offered him the role of Caesar Enrico Bandello, Little Caesar. “I had the advantage of reading the book by (W.R.)Burnett, and when the script was first submitted to me, it was just another gangster story—the east side taking over the west side and all that. Finally, I was given a version that made some difference, reading more or less like a Greek tragedy. It’s a man with a perverted mind, ambitions of a kind, who sets a goal more important than himself, that what makes him a highly moral character in his perverted way. He is a man who defies society, and in the end is mowed down by the gods and society, and doesn’t even know what happened” (Parish).

Typically, many of the standard sources, and indeed the memoirs of those involved with Two Seconds, brush off many early 1930s performances by Robinson, “Most of Robinson’s 1932 film work, while profitable for Warner Brothers, provided the actor with rather routine screen assignments” (Parish). Mervyn Le Roy includes this film in a list, “There was Two Seconds once more with Edward G. Robinson, and Hard to Handle (my second with James Cagney).” Robinson writes only, “Two Seconds is a mishmash memory” although he does note later that it was one of several films in which his restless wife, Gladys Lloyd, was given a bit part to play as a favor to the star. Her character is billed as “Woman.” 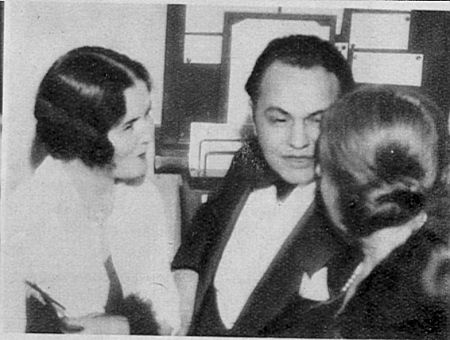 But in his memoirs, Le Roy does acknowledge that his Pre-Code films like Little Caesar, Five Star Final and I am a Fugitive From a Chain Gang were unique. “I think this was Hollywood’s bravest era, and it was exciting to be a part of it. Expose films were the rule, but we were able, at the same time, to combine our exposes with entertainment, unlike the more recent history of message films that are so heavy and ponderous that they do not entertain at all, and therefore defeat their own purpose.” He loved making Little Caesar, chronologically the first of the 1930s gangster pictures. “Little Caesar started it all. I’d like to be able to say that I realized I was blazing a trail, setting a precedent, revolutionizing an industry. In all honesty, I can’t say I made Little Caesar for any such noble goal. All I wanted to do was make a movie with some meat to it, some substance, where before all had been froth.”

Ted Sennett is one of the few writers from the “nostalgia era” of film book writing (Warner Brothers Presents is from 1971) who grasps the power of this unheralded film. “Two Seconds is a somber, economically produced film that is not easily forgotten…This odd film grips the viewer’s attention until the final moment.” 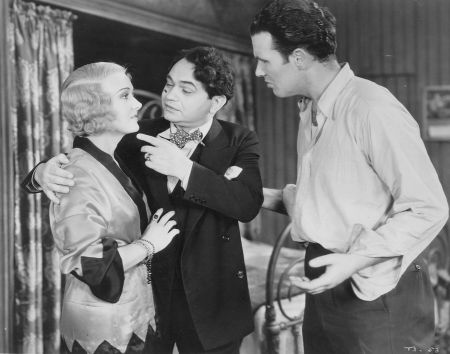 Adapted from a short-lived stage play, Robinson co-stars with Preston Foster, recreating his stage role. For the most part, rediscovery of this film is due to the interests of those writers rescuing Pre-Code films from obscurity. Warner Brothers preserved all their original camera negatives and donated them to the Library of Congress, for whom we have to thank for this brand new print, a favorite of curator Mike Mashon. Mick La Salle reminds us, “So why go back to the movies of the Pre-Code era? What’s the point of discovering and watching these films all these years later? The questions are valid. After all, we’re talking about a brief period that ended almost seventy years ago and counting. Most of the films are unknown, and don’t even attract nostalgia buffs, since there’s nothing drippy or sentimental about them. Indeed, the kick of the Pre-Codes is the opposite of nostalgia. Watching them, we don’t search for the past in the present. Rather, we discover the present in the past.” 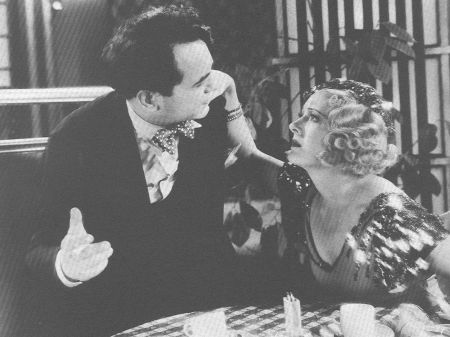 There’s a scene at the end of this film that I think you won’t soon forget. As La Salle describes Robinson’s courtroom speech, “The thinking is twisted. The passion takes him over the edge. He cracks before your eyes. This is Robinson, the great American actor, in the most intense minutes of his film career. He endows the speech with the shape and size of melodrama, but maintains the precision of a ballet dancer. Remaining true to his core, and so in control, he goes to a deep place, without fear, hesitation or bluffing, using himself unflinchingly. No movie star ever looked like Robinson, and he’s beautiful.” 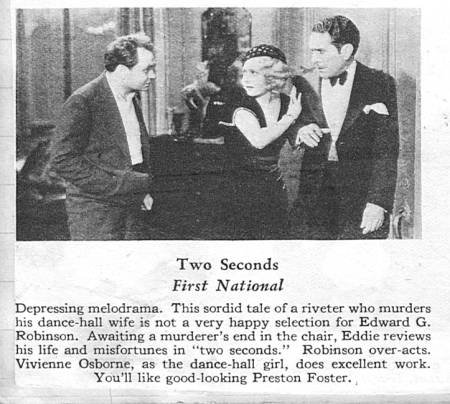 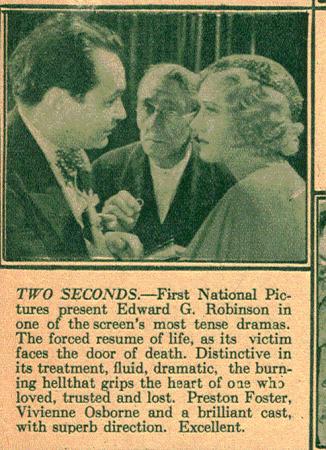