Alfred Hitchcock’s masterpiece, Vertigo, was dismissed as glossy claptrap in many contemporary reviews. It has outlived its critics by becoming a fixture on many lists of the greatest films of all time. Ostensibly a twisty mystery about a detective with a fear of heights, its true subject is the hero’s pathological obsession with a dead woman. Vertigo’s inherent creepiness deepens with each successive viewing, and in fact, knowing the outcome allows the viewer to look at the film in different ways. Analyzed endlessly by film critics, “Vertigo fares best on screen and not in discussions on paper” (Harris and Lasky).

Vertigo was adapted from the book D’Entre les Morts (From Among the Dead) by Pierre Boileau and Thomas Narcejac. Their previous novels, Les Diaboliques and the Wages of Fear had been made into films in their native France. François Truffaut said D’Entre les Morts had been written specifically to catch Hitchcock’s eye, and it did. The book was set in Paris and Marseilles during WWII, but was transposed to the more familiar environs of San Francisco. A major reason for locating the film in that city was that the village church which was the murder site in the original could be transposed to a California mission church.

Ghostly events have a prosaic explanation in Vertigo, even as an eerie fatalism casts a spell on the characters. Hitchcock was far more interested in mood than in plotting, and, as usual, more interested in suspense than surprise. Taking the audience into your confidence allows much more time for squirming than a simple shock, like the explosion of a bomb. The studio executives disagreed, believing key revelations should be saved for the end of a movie, but this would have completely subverted Hitchcock’s plan, making Vertigo a far different (and lesser) movie.

Creating the hero’s physical sensation of vertigo, with the staircase falling away, was achieved by doing a forward zoom and reverse tracking shot simultaneously. This effect, a first, now part of the standard vocabulary of movie making, was also resisted by the studio, until building the set in miniature reduced the cost from $50,000 to $19,000—an extraordinary amount of money for a single shot.

James Stewart, already a veteran of Hitchcock films The Man Who Knew Too Much and Rear Window, was a full creative and business partner with Hitchcock in the film. After his combat experience in WW II, Stewart resumed his acting career with the intention of tackling more psychologically complex roles. Scottie Ferguson is one of his greatest performances, taking his obsessed character to the edge of hysteria without losing audience sympathy. Novak recalled Stewart “went deep inside himself to prepare for an emotional scene. He was not the kind of actor, who, when the director said ‘cut’ would be able to say OK and walk away. I was the same way. He’d squeeze my hand and we’d allow each other to come down slowly, like in a parachute” (McGilligan). Stewart also acted as a buffer, reassuring Novak that Hitchcock wouldn’t have cast her if he didn’t want her.

Kim Novak’s performance is at the heart of Vertigo, and the arguments about her effectiveness as Madeline have been unceasing for almost 50 years. Originally, Hitchcock had planned for his new protégée, Vera Miles, to take the role, but she inconvenienced him by getting married, and then becoming pregnant, for which he never forgave her. She had already done costume fittings and in a key plot point, a portrait of Carlotta Valdez had been painted in her likeness. Miles, who was not a glamorous actress, was uneasy with being refashioned as the next Grace Kelly (Hitchcock’s probable intention) and was evidently relieved to miss out on the role.

Kim Novak was the most popular star in 1957, according to Box Office Magazine, and perhaps it was his “chagrin over losing Vera Miles kept him from going wild over Kim Novak” (McGilligan). Hitchcock and Novak clashed bitterly over costumes and hair styles, as Novak refused to wear the tailored grey suit which Hitchcock demanded. He enlisted the aid of Paramount designer Edith Head. “Handle it, Edith. I don’t care what she wears as long as it is a grey suit.” Head was used to working with temperamental stars. For their next costume consultation she had a variety of grey fabric swatches and a sketch that Hitchcock had approved. Feeling that they were now collaborating on the design, Novak acquiesced to the director’s vision (Head and Calistro).

Novak’s passive carnality has always provoked adjectives like “mask-like” in reaction to her performances, but it is her stillness that allows both Scottie and the movie audience to read her face according to their own desires. Screenwriter Samuel Taylor said, “If we’d had a brilliant actress who really created two distinctively different people, it would not have been as good. She seemed so naïve in the part, and that was good. She was always believable. There was not ‘art’ about it, and that’s why it worked so well” (Dewey).

Barbara Bel Geddes plays the selfless Midge, Scottie’s spurned admirer. As a reward for this frumpy, thankless role, she was rewarded with the lead in the best remembered episode of the director’s tv show, Alfred Hitchcock Presents. In “Lamb to the Slaughter” (written by Roald Dahl) Bel Geddes murders her husband with a frozen leg of lamb and then cooks and serves it to the investigating detectives.

“We could tell,” screenwriter Samuel Taylor recalled, “that this was a very important project for Hitch, and that he was feeling this story very deeply, very personally.” Many thousands of words have been written about the parallel of the director remaking his reluctant star, and Scottie Ferguson’s behavior in Vertigo. The eroticism of the film, certainly a more demanding aspect of the plot than its logical progression, hinges on Detective Scottie Ferguson’s efforts to dress the object of his desire, rather than undress her.

As an indication of its critical status at the time, Vertigo was nominated only for Best Art Direction and Best Sound Oscars. Bernard Herrmann’s evocative score is such an integral part of the film that Vertigo is virtually unimaginable without it. San Juan Bastista is a real Spanish mission south of San Francisco, and you can recreate Madeleine’s wandering there, although not up to the bell tower, which is a matte shot (painting). I can’t tell you what a strange sensation it was, when, on a California vacation, driving to a historic site on impulse I realized I was at the mission church in Vertigo!

Vertigo is open to many interpretations, what Hitchcock called “the icebox factor.” Do you want to discuss the film when you get home, raiding the refrigerator for a late night snack, and are the plot convolutions not only worthy of discussion but hold up even under examination? Robin Wood, in one of the earliest appreciations of the director’s work, Hitchcock’s Films (1965) described Vertigo as “Hitchcock’s masterpiece to date and one of the four or five most profound and beautiful films the cinema has yet given us” (Barr). Or, as James Harvey says, “Because this is the vertigo—this madness of longing, this almost infinitude of painful desire, of longing beyond longing—that Hitchcock has been drawing us into all along”

Note: Hitchcock appears about 11 minutes in, walking past the shipyard. 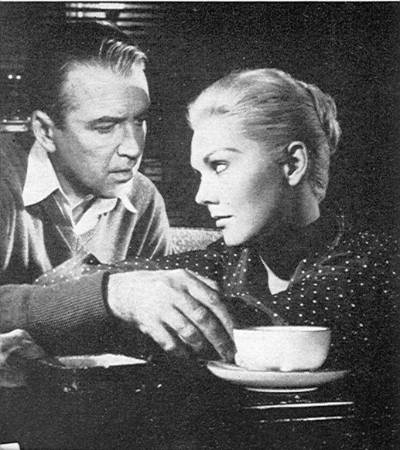 (Photo from Films in Review. Sources include: Vertigo by Charles Barr (BFI monograph), Hitchcock/Truffaut, The Complete Hitchcock by Paul Condon and Jim Sangster, The Films in my Life by Francois Truffaut, James Stewart by Donald Dewey, Films of Alfred Hitchcock by Robert A. Harris and Michael S. Lasky, Hitch by John Russell Taylor, Alfred Hitchcock, a Life in Darkness and Light, by Patrick McGilligan, Hitchcock at Work by Bill Krohn, Edith Head’s Hollywood by Edith Head and Paddy Calistro, Movie Love in the Fifties by James Harvey, Vertigo review in June July 1958 Films in Review.