A fiery cabaret dancer rescues a baby from a garbage bin, and decides to raise him, against the wishes of her zoot-suited pimp.  A postwar cabaret noir, it showcases the Afro-Caribbean music of Mambo King Perez Prado, Rita Montaner and Pedro Vargas.  The “incandescent” Sevilla, stars as the rebellious but self-sacrificing diva of the Cabaret Changoo, in what is considered one of the greatest films of Mexico’s Golden Age. DCP courtesy of Olympusat Inc. and Festival Internacional de Cine de Morelia.

The Golden Age of Mexican Cinema is considered to be the 1940s and 50s, with a studio system, and a star roster, similar to Hollywood’s.  Some were versions of Hollywood genres, but some were unique to Mexico, like the luchador horror films.  Mexico produced more Spanish language films than any other country.  As J. Hoberman described the Mexico at Midnight program at the Museum of Modern Art, they “overflow with fatalistic tales of passion, jealousy and betrayal…part film noir, part grand opera” (Hoberman).

One of those distinctly Mexican genres is the cabaretera films.  They reflected the state of the nation as a whole, as the rural economy changed to an urban one, with the corresponding tremors through society.  Often the films were about a provincial girl, separated from her family and paternal household and stranded in the city, with its unfamiliar spaces and threatening citizens.  Forced to enter a sinful world, she survives, but without losing her personal morality and righteous fury. 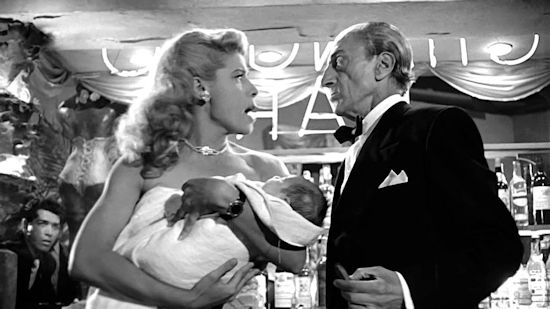 Last week, we saw Sombra Verde, a film directed by Roberto Gavladon, master of Cine Noir, and poet of shadowy urban spaces…only in the bright tropical jungle, instead of the urban one.  This week, we see a noir-ish film directed by Emilio Fernández, who often set his films in rural places, his “ranchera” films.  He is so associated with the indigenous population of Mexico that he is familiarly called “El Indio.”  “I am the Mexican cinema” he stated (Village Voice).  Or, as Museum of Modern Art curator Dave Kehr said, “El Indio had become a branch of Mexican foreign policy, the cinematic adjunct to the muralists in creating the legend of a glorious, revolutionary Mexico (ibid.)

He was one of the most important film directors of the Golden Age.  In the 1930s indigenismo (Indianism) flourished.  Painters, including muralists, writers, musicians, filmmakers and photographers incorporated Mexican themes into their work, as an expression of exuberant nationalism. Fernández lived in Los Angeles for a time, and also was able to watch the great Russian director Sergei Eisenstein at work, when he came to Mexico.  He wanted to represent his beloved country to the world using globally embraced cinematic style. His most famous film, The Pearl, based on a story by John Steinbeck, is unbearably sad, an arthouse hit that was, for many people, the only Mexican film they could name.

He was a bit of a fabulist, and supposedly invented incidents in his life for effect, “This was a man who was a product of the Revolution, proud of his indigenous roots, who privileged popular art in his films, home, parties and attire.  In sum, a man who decanted and purified the people to arrive at their essence” (Paranagua 181)  In the Revolution, he fought side by side with his Generalissimo father.  Sentenced to 20 years for participating in the rebellion, he escaped prison and came to LA, where he worked as an extra in 1920s and 1930s Hollywood.  Perhaps he was also a circus cowboy, a salmon fisherman, a pilot, and a bartender. Perhaps, Dolores del Rio, currently a star north of the border (and later for him in Mexico) had him pose nude for her husband, Cedric Gibbons, when he modelled the Oscar statuette. When Lázaro Cárdenas was elected President of Mexico in 1934, the revolutionaries were given amnesty, and he returned to Mexico, where he worked as a screenwriter and actor.  His nickname, El Indio, was because of his indigenous appearance; his face got him roles as rural Mexicans, bandits, cowboys and revolutionaries.  He began directing in 1942, Maria Candelaria, two years later, won the Grand Prize at the Cannes Film Festival.

After Victimas, his career began to languish, perhaps because he shot a critic in the groin, at least according to Eli Wallach, who met him when he was an uncredited assistant on The Magnificent Seven.  He ended his film career as an actor, playing villains, like the one who demands, Bring Me the Head of Alfredo Garcia. In the late 70s, he shot and killed a farm laborer, and spent time in jail again.  He died in 1986.

Cuban-born Ninón Sevilla, reina máxima de las rumberas, plays the heroine, Violeta. She considered becoming a nun, but after she became a cabaret dancer in Havana, she decided on show business instead!  She arrived in Mexico as a dancer in a show, and was offered a movie contract.  Offered the chance of a Hollywood contract at MGM and Columbia, she opted to remain in Mexico.   The creator of her on-screen persona, her original costumes and distinctive hairstyles, and choreographer of her own dances (which included elements of Santeria) she’s considered “one of the ultimate erotic figures of Mexican cinema” (Wikipedia).  She was an icon of the “rumbera” and her character is frequently a “bad girl” redeemed by her dancing ability and strength of character.  François Truffaut said admiringly, “Is Ninón dancing for glory?  No way, never.  It is quite clear Ninón is dancing for pleasure” (People 186).  Here, she dances to the music of Perez Prado, who later brought the mambo craze to the US. She retired in the 1950s, but a comeback in 1981 in Noche de Carnaval, was rewarded with an Ariel (a Mexican Oscar) for Best Actress.  She continued working in telenovelas until 2013 and died in 2015 at the age of 93. 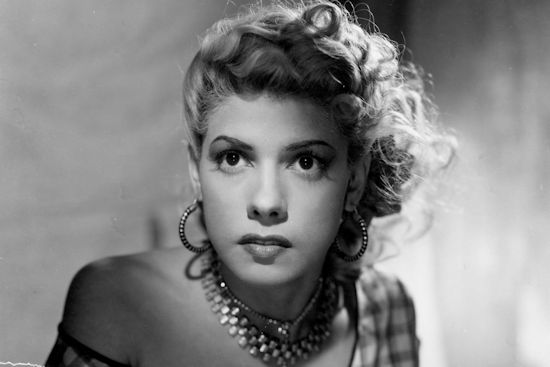 “As an actress, Sevilla’s emotional dial is permanently cranked to 11. There is no setting for tranquility or reflection. Her smile of maternal tenderness has a heat-lamp intensity that threatens to give the baby a fever; her anger could crack a building’s foundation; her despair is like floodwaters engulfing a city. But that’s what this kind of melodrama requires, and when Sevilla takes to the floor to dance, it’s one of the most electrifying sights any musical has to offer. The only problem with her performance of “La cocaleca” is that Sevilla is such an obvious star, it’s hard to believe Violeta doesn’t instantly become one, too” (Village Voice).

I programmed this film at the North Carolina Museum of Art, so I could see it! The shadowy, deep focus photography is gorgeous (the DP was Gabriel Figueroa) and the throbbing music permeates almost every frame of the film. The bands are integrated, and Sevilla dances with an Afro-Cuban man, that, along with the sensual dances, frank depiction of prostitution, and the violent underworld of the clubs, sets it apart from Hollywood films of the era. Rita Montaner sings a racy double entendre song that had the audience gasping. Violeta’s pimp, Rodolfo Acosta, wears flashy zoot suits, pachuco style, and dances a wild dance at the beginning, a hint that he’s liable to explode in physical violence towards his “employees.” As opressive as the paternalistic system that keeps Violeta and her friends in thrall to criminals, it’s remarkable that the women have a fierce solidarity. They only have each other in this dark underworld. Violeta’s fierce devotion to her adopted son sets her apart as a veritable angel of the slums.

But, even if the setting for Victimas del Pecado is urban, the values are the same at those in his ranchera films. They “are imbued with noir’s darkest moments, both aesthetically and thematically, but ultimately, they refuse to give up the “solid Mexican values” of national optimism.  Cities may be claustrophobic spaces of danger and desire, ringed by a darkness not dispelled by neon and jazz, women may entice and entrap, sin and perdition may threaten, but in the end melodrama redeems waywardness, offers hope, proposes a “different dawn.”  Spectator tears wash away the sins of the world” (Dever 103). 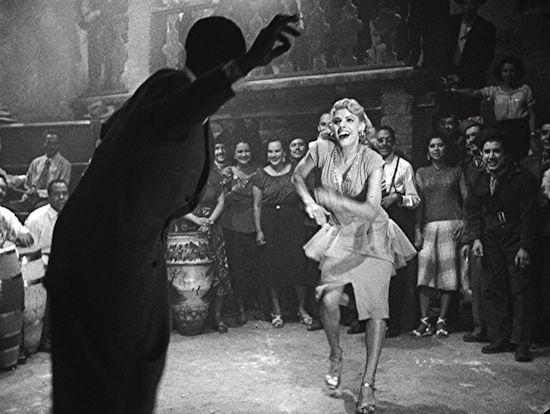