AViridiana has many virtues, and the greatest of these, as in almost all of Bunuel=s films, is the power to disturb.@ The heroine (named after a saint) is a chaste woman who wishes to perform good deeds. Seeking to repent for a sin for which she blames herself, she gathers a collection of disgusting and cynical beggars around her, hoping her charity will save their souls. Bunuel was educated by Jesuits (as was Hitchcock) and his films are centered around a trinity of eroticism/religion/death. His obsessions and imagery have always been intentionally provocative: ASex without religion is like an egg without salt.@

Luis Bunuel was born February 22, 1900 in Calanda, Spain, a small village of 3,000 with an almost mediaeval atmosphere. . Until he left for the University of Madrid, he had not been a part of modern society, and the city came as quite a shock. His father wanted him to study a subject that would help him manage the family estate, so he enrolled in agricultural engineering. Hopeless at math, he became a student of a famous entomologist, and his passion for insect life is visible in many of his films. At the very least, he scrutinizes his characters as coolly as an entomologist examines insects through a microscope.

But, the greatest influences on his life were the friendships he made in the student residence, particularly with poet Federico Garcia Lorca and painter Salvador Dali. Amid a yeasty intellectual atmosphere, they went to the movies; especially comedies. Their favorite was Buster Keaton. Keaton’s lack of sentimentality and visual repetitions do seem to have echoes in Bunuel’s black comedies. In an essay on Keaton’s College Bunuel wrote the film’s simplicity was “as beautiful as a bathroom.”

Borrowing money from his mother, Bunuel and Dali made Un Chien Andalou. They had been discussing their dreams, and using those images and other free associations, made a film whose opening scene has never lost its shock value. Surrealism taught him to let his unrestrained desires flow into his films. After a falling out with Dali, Bunuel went on to make L’Age D’Or “the only authentic surrealist film” according to Andre Breton. The deliberately incendiary images caused a riot. The Pope threatened to excommunicate the nobleman who had financed it, and the film was withdrawn from circulation. A European representative for MGM, impressed with L’Age d’Or, invited him to Hollywood with a 6 month contract in 1930.. Bunuel became a curious observer of the studio system and worked various odd jobs in the States and elsewhere for the next 15 years (Some of them very odd, like re-editing Leni Reifenstahl’s Nazi propaganda films at MoMA for the US government) In exile from Franco’s Spain, who had murdered his friend Lorca, in 1946 he again began making his own films in Mexico.

One of these Mexican films, The Young One was shown at Cannes in 1960, where he found the backing for “Viridiana,” reestablishing himself, as what he had always been, a European film maker. Beginning with Viridiana he made a stunning series of films including The Exterminating Angel, Tristiana, Diary of a Chambermaid, Belle de Jour, The Discreet Charm of the Bourgeoisie and That Obscure Object of Desire.

Finally, he returned to Franco’s Spain. His script for Viridiana was approved, because the censors were unable to read between the lines. They did insist on changing the ending, which Bunuel embraced as an improvement over his own, thinking it even more immoral. Filming was quietly completed in 23 days, the editing done in Paris, and the film presented at Cannes. Along with the Golden Palm, the film got a roasting from the Vatican. The Spanish censors were fired, the film was banned in Spain, and Bunuel became internationally famous. 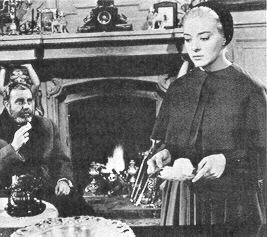 In Viridiana, Bunuel casts doubt on both the value of spiritual beliefs and on the purity of the central character’s motives. But, he does not discuss God, but the way God is worshiped. He was greatly criticized at the time for showing a crucifix that turned into a pocketknife, yet this was a common souvenir that could be bought throughout Spain (although not after Viridiana!) Raised as a Catholic (although often quoted, when asked his religion, “I’m an atheist, thank God!”) he firmly believed that sin multiplied the possibilities of desire.

“An artist cannot change the world. But, they can keep an essential margin of non-conformity alive.” Luis Bunuel.

(Photo from the 1973 Audio Brandon film rental catalogue, a relic of the Golden Age of repertory film programming).