Pert Kelly is the cat’s pajamas, a go-getting shopgirl by day, and heedless flapper by night.  When this carefree Charleston champ snags a millionaire, will the temptation to misbehave overwhelm her?  Until recently a lost film, this is a new restoration of a sparkling Jazz Age comedy.  “I was the spark that lit up Flaming Youth, Colleen Moore was the torch” (F. Scott Fitzgerald).

Colleen Moore was born Kathleen Morrison in Michigan in 1900, with one blue eye and one brown eye.  She did not have the deprived childhood of many silent film stars.  Close to her family, she had a warmly embracing childhood, and parents who supported her ambitions.  She decided she wanted to be a movie star, without any prior acting experience, and enlisted the help of her uncle, newspaper editor Walter Hovey (supposedly the model for the editor in The Front Page).  He had helped the racist epic The Birth of a Nation clear the Chicago censorship board, and in return, D.W. Griffith offered the teen a six-month contract.  Her name changed, to better fit a marquee, she flung herself into learning everything about motion picture acting.  After a series of well-received dramatic roles, she decided she needed to learn comedy, and when her contract was up, joined a comedy studio (considered a step down) to hone her skills.

In 1923, she starred in the film version of the shocking novel, Flaming Youth, as a flapper.  With her bobbed hair, short skirts and reckless manner, she defined on-screen the transition between the Victorian era and the modern world. “Its heroine might be liberated in clothes, haircut and social behavior, but the world still had its old-fashioned values to be reaffirmed, Colleen Moore’s “Pat” became the emblem of what a flapper really was.  She was cute and lively, but she wasn’t sensual, like Clara Bow.  There was no real suggestion that she might ever do anything truly stupid or immoral.  Her galoshes might be flapping, but she was pretty zipped-up otherwise” (Basinger 421-22). 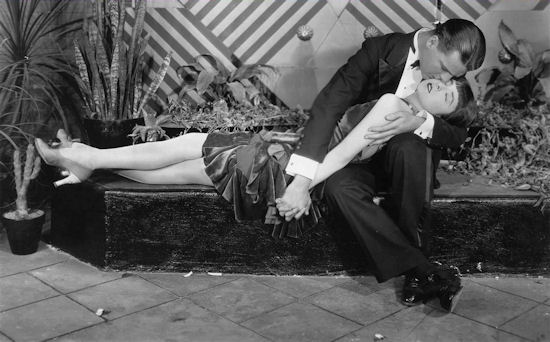 This is a posed still, this scene is not in the film. I love it, though!

The movies taught girls how to cut their hair (Dutch boy bob, Colleen had it first, long before Louise Brooks), wear slim fitting, short dresses (or tweed suits), low heeled shoes, make-up, to dance and flirt, and, in a series of Cinderella stories, meet a nice boy and get married.  She was a huge box office attraction and beloved movie star.  When the sound era came, she lost interest in the movies, feeling she was too old to appeal to her audiences the way she had as a girl.  Because so few of her films survive, she is somewhat forgotten, although revivals like the one tonight invigorate her reputation.

It’s worth noting that some of the film takes place in that epicenter of fantasy, the department store.  Don’t YOU want to go shopping in a 1920s emporium?  Not only was any item you could possibly desire was under one roof, but the girls who worked as salesgirls had the freedom a paycheck brings, and an opportunity to meet men of all social classes.  Clara Bow’s It also has a department store son who is the object of her desire–what these films leave out is that most of the department store merchant heirs were Jewish. 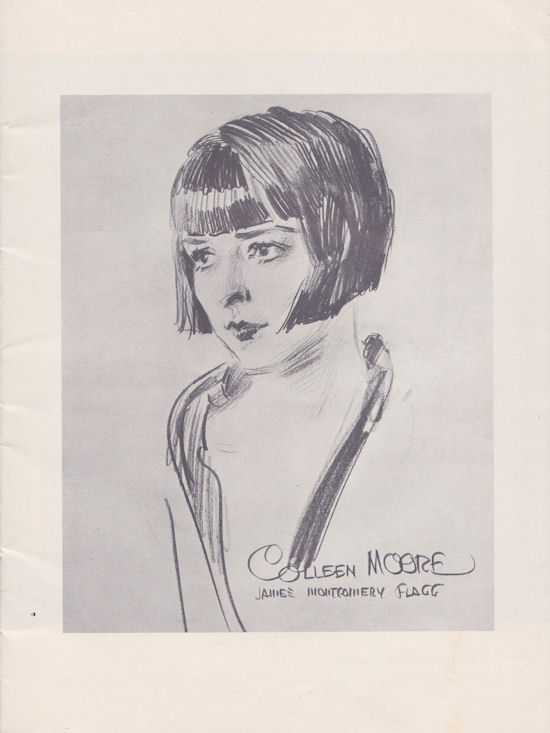 This portrait is in the front of a booklet about her fairy castle.

The critics loved “Why Be Good?”  “Remember Flaming Youth? With Colleen Moore flaming all over the place, setting cushions on fire with the slightest touch, and what not?  People, as the ancients were wont to chatter, ‘You hadn’t seen nothin’ then!” (Codori 234). 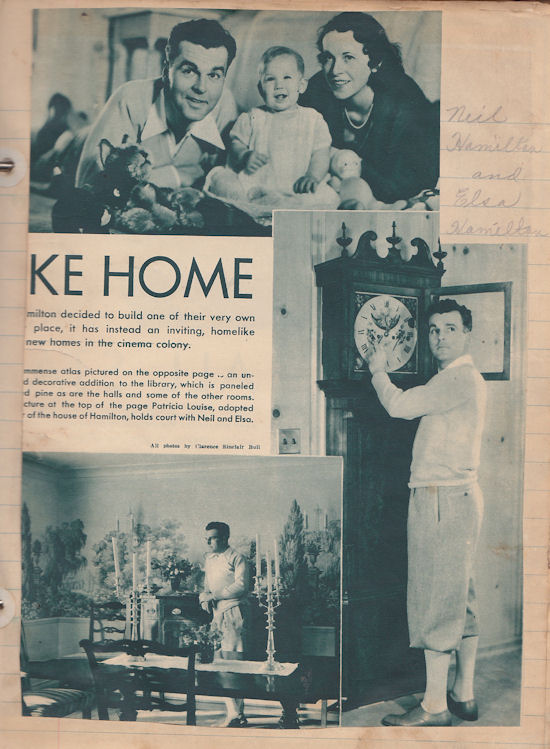 From an early 1930s movie star scrapbook. He was married to his wife for 62 years.

Neil Hamilton, her co-star, did not have a lot of on-screen sizzle, in my opinion. He starred in 268 films from the late teens through the silent and talkie eras and into television, where he is best remembered as Commissioner Gordon on the 1960s Batman tv series.  He was Ronald Colman’s brother in the silent Beau Geste, Nick Carraway in the lost 1920s version of The Great Gatsby, and the man Jane left for Johnny Weismuller’s Tarzan the Ape Man and in Tarzan and His Mate. He acted steadily in film and on television, his last film was in 1970.

Watch for Jean Harlow as a dress extra. I haven’t spotted her yet, so let me know! 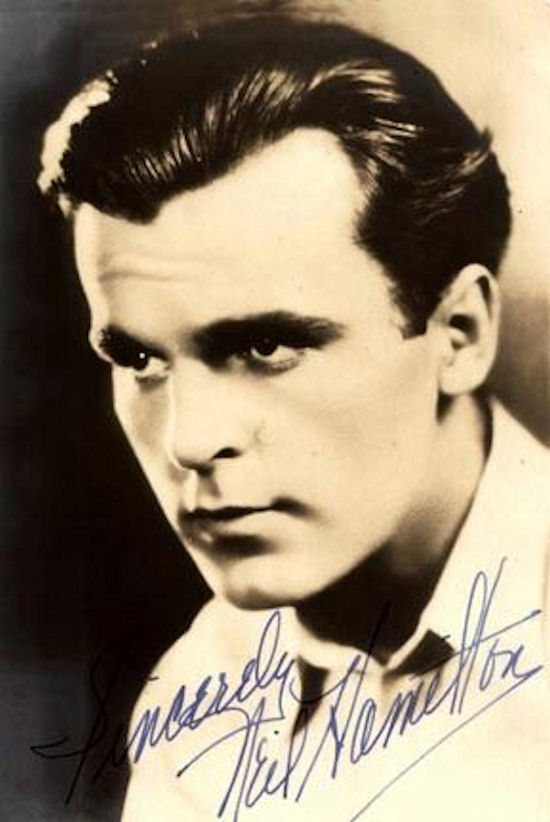 This is an autographed photo of Mr. Hamilton from the collection of Jane Hendricks, who sent away for it in the 1920s. Not my scan (it didn’t reproduce well in the frame) but identical to the one I have.

Why Be Good? Colleen Moore’s last silent film, represents both the peak and the end of her career.  Her next film was a talkie.  This film was long thought to be lost, and before 2014, had not been seen for over 80 years.  The story of its rediscovery is a dramatic one.

Ron Hutchinson of the Vitaphone project hosts an annual program of shorts at Film Forum. “Prior to a screening, I updated the audience on latest activities of The Vitaphone Project.  I casually mentioned that I recently acquired all the soundtrack disks for Colleen Moore’s Why Be Good?  I said something to the effect that “unfortunately, this is a lost film.”

Film historian Joe Yranski, who ran the film library at the Donnell Media Center, was a friend of Colleen Moore, and knew more about this film than probably anybody on the planet, yelled out “No it’s not!  I know where it is!  The full house at Film Forum cheered.”

Yranski had interviewed Moore who said there was a print of the film surviving in an Italian film archive.  Milan’s film archive housed a 35mm nitrate print, donated along with a print of Synthetic Sin, by actor Antonio Moreno. American prints of the film were destroyed in a Warners vault fire.  Ned Price, WB Chief Preservation officer, negotiated the terms of the restoration, in collaboration between Warner Brothers and L’Immagine Ritrovata of Bologna.   Since the film had a Vitaphone score, if you buy the DVD from Warner Archive, you get the a score by 1920s jazz musicians.

The first talking film was released in 1927, and 1929 was near the very end of the silent film era.  During the silent era, musicians played the score live, a piano, a trio, and orchestra, whatever the theater could afford. The music was not only different from venue to venue, but from show to show. A recorded soundtrack meant it would sound identical in every theater, an innovation. In fact, it was thought that Vitaphone would be used only for music, because who wants to hear actors talk? But, there would soon be a market correction on that issue. The soundtrack of Why Be Good? originated at the Victor Talking Machine Company in Camden, NJ,  consisting of 41 popular songs of the day merged with the on screen action.  Vitaphone music scores, a precursor to 100% talking films, used sound effects like door knocks, horns honking and so on to sweeten the action.  Early Vitaphone scores often included songs whose titles were puns on the action, which can be quite distracting.  Some even included inappropriate vocals.  Both these are thankfully missing here.  The musicians watched the film and played, while the music was recorded on a 16 inch wax master. Metal stampers created from the finished recordings stamped hundreds of Vitaphone disks, one for each reel of the film.  The soundtrack of Why Be Good? has a lot of hot jazz players (unlike the film, The King of Jazz, which had NO jazz in it) and  historians have identified players like Jimmy Dorsey, Phil Napoleon, Joe Venuti and Eddie Lang. 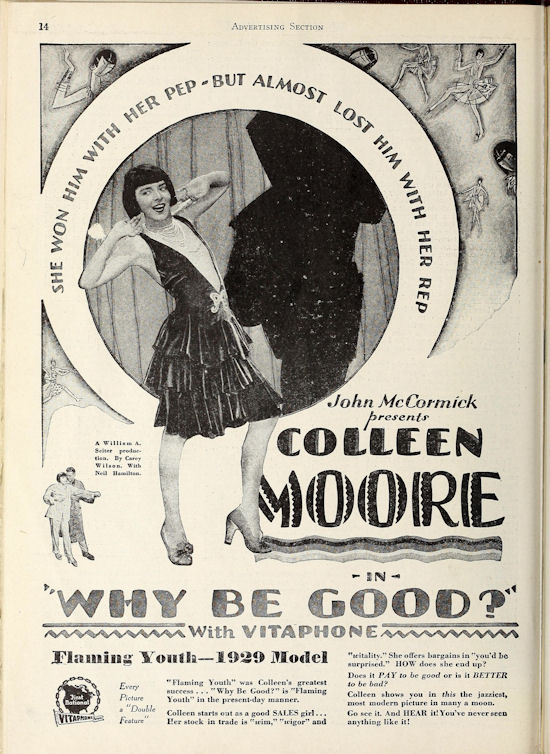 Moore had a very unhappy marriage to an alcoholic during the peak years of her stardom.  Her second marriage also ended in divorce, but she finally found happiness with a Chicago stockbroker, Homer Hargrave.  She was a doting stepmother to his children, and devoted herself to her famous dollhouse, which toured department stores as a fund raiser for crippled children, and now resides in the Chicago Museum of Science and Industry.  The fairy castle is a work of art, with many real gemstones (repurposed from the jewelry her first husband gave her to apologize for his binge drinking episodes) and contains rare items like the world’s smallest Bible, and an autograph book with the signatures of many 20th century powerhouses. 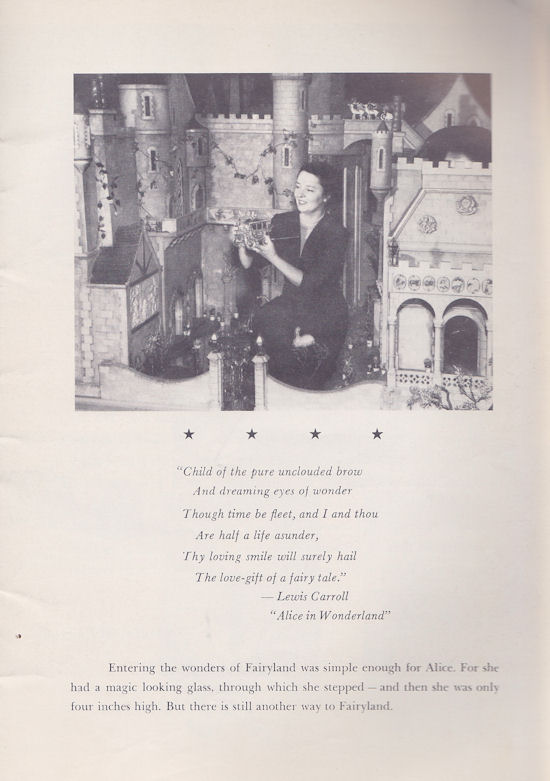 This is also from the booklet about her fairy castle. 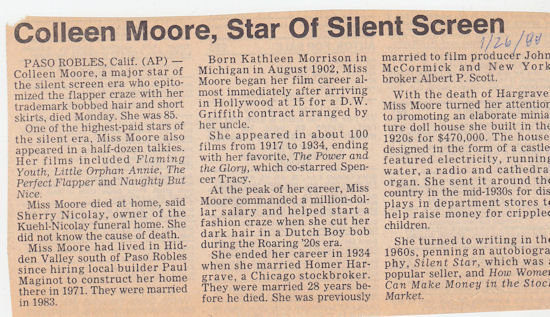 I saved her obituary from the Raleigh News and Observer

I’m told by Kevin Lewis, who knew her in the 1970s, that she felt she had lived a happy life, even if she had mixed feelings about her career in Hollywood. She thought her delightful comedies were uninspired and that she had never made a single great film.  Last night, at the North Carolina Museum of Art, urged on by David Drazin’s hot jazz accompaniment, the audience completely adored every minute of Why Be Good? At the last moment, when Winthrop Peabody, Jr., tries to slut shame Pert Kelly, and she gives him a piece of her mind, the audience burst into spontaneous applause. A great silent film moment. Perhaps, our joy and laughter reached Colleen in her fairy castle in the sky. 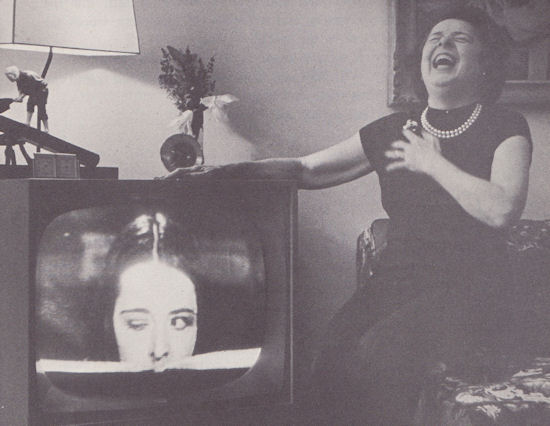 She laughs at Ella Cinders on television, one of the few of her films in circulation in the 1960s and 70s. Photo from her autobiography.

Here is a lovely feature from CBS Good Morning about the restoration of her fairy castle. https://www.youtube.com/watch?v=lwrOw-b81X8

It shows many of the details, including tiny books handwritten by F. Scott Fitzgerald and John Steinbeck, the world’s tiniest Bible, and what is supposed to be a sliver of the True Cross!