An impoverished beauty on the edge of polite Edwardian society schemes to leverage her charms and marry her penniless beau by befriending a gentle, ailing heiress, “the world’s richest orphan.”  Within a melancholy, drizzling Venice, they pursue their labyrinthine passions through the maze of canals. Thoughtfully adapted from a novel by Henry James, in a psychological landscape where passions run deep, constrained by propriety.  “Satisfying, Sexy, Superb.” (CBS TV).

Henry James began thinking about the story of The Wings of the Dove, as early as 1894, although it was not published until 1902.  Part of the delay was his financial need for his work to be serialized in magazines, and this novel was rejected in that format, although The Ambassadors was not, and he concentrated on that work, in order for it to be published, and serialized, first.

His inspiration was one that touched on many of his fictional works, the death of his beloved cousin Mary Temple, nicknamed Minny, who died of tuberculosis in 1870, at the age of 24.  He thought of her “as a young person conscious of a great capacity for life, but early stricken and doomed, condemned to die under short respite, while also enamoured of the world” (James xiii).  Perhaps, they were in love (James never married) but the fact that they were first cousins was another impediment to their romantic affection.  James considered Milly the heroine, the dove of his story, one reason for the difficult path of acceptance of his novel, since it begins wrapped in the romantic love of one couple, but it’s not exactly their story. 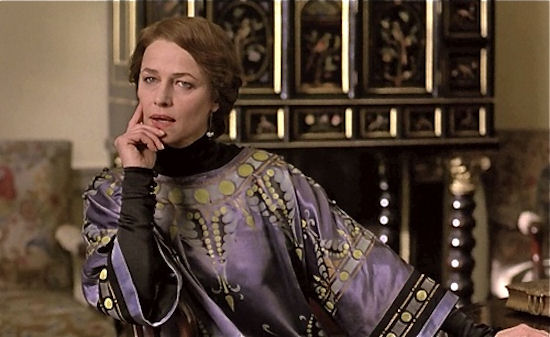 This film is not a Merchant Ivory production, in spite of the fact that it stars Helena Bonham Carter and takes place in the Edwardian era.  Instead, this film has a darker tinge than the stories emanating from that production company.  “My pitch was that this was film noir,” said Hossein Amini of his screenplay for The Wings of the Dove, filmed by director Iain Softley in 1997. “The only difference is that they don’t literally kill each other, they just break the other girl’s heart and kill her that way” (Tom Shone).  Director Ian Softly had never done a literary adaptation before, and so attacks the story in a modern way, making sexual relationships explicit, rather than implied.  And it ends, like a good film noir in ashes and regret, like The Postman Always Rings Twice, or Double Indemnity. More recently, he’s directed The Two Faces of January, and there is something about this love triangle that evokes the darker passions of its author, Patricia Highsmith.

Softley moves the action from the end of the Victorian era into the Edwardian one. He wanted to show all the characters at odd with Victorian conventions; in the new century, there was electricity, the London underground, and other new technology. Less constricting fashions implied more relaxed behavior was sure to follow. “With modernity looming, Merton now talks of worker’s rights; women smoke at parties, where an air of Oriental licentiousness prevails; and the painting at which Milly gazes in the National Gallery is now not a Bronzino but Gustav Klimt’s 1908 semi-nude, Danae” (Tom Shone). 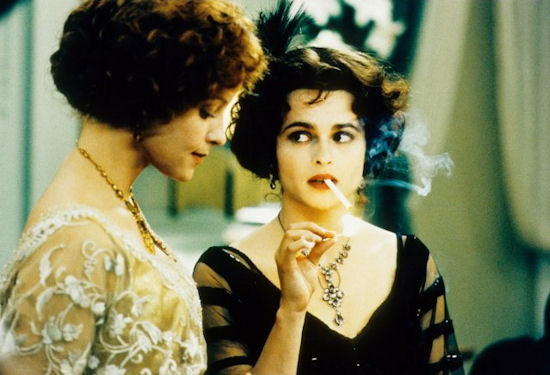 It’s still pretty shocking for a woman to be smoking. Here, the colors the actresses wear are good and evil personified.

Kate Croy’s fear of poverty is accentuated by the lack of options for women, as well as the strictures of London society. In the novel, she is not only saddled by her father’s needs, but those of her widowed sister.  “…the more you gave yourself, the less of you was left. There were always people to snatch at you, and it would never occur to them that they were eating you up. They did that without tasting” (James 45). Venice is also portrayed, as the warmth and passions of Italy often symbolized to the British, a gateway to more unrestrained emotions.

Bonham Carter is about to end the era of fetishizing her beauty beneath picture hats and move onto her edgier Tim Burton era, ‘Her Kate Croy is a subtler filleting of her pre-Raphaelite ingénue persona: she gathers up all her tart impatience and uses her beauty as a mask: an elegant poker face. She’s like a Millais nymph as depicted by Bette Davis. “It’s in her eyes,” says Lord Mark, ‘Can’t you see? There’s so much going on behind those pretty lashes’” (Tom Shone).

The Wings of the Dove came out the same year as Titanic, and was an awards rival.  Titanic swept the Oscars in many categories, and nabbed the Best Costume Oscar, leaving Sandy Powell’s amazing designs, and Wings of a Dove in the dust.  She said “I was keen to avoid a cream lace look, and chose lighter, brighter colors for more of an ethnic, North African look” (frock flicks).  The clothes are drenched in a period appropriate Orientalism, and are greatly influence by the Venetian gowns of Mariano Fortuny, especially the pleated silk Delphos gowns, and printed velvet wraps.  Even Charlotte Rampling, playing the scheming aunt, wears fashion forward Paul Poiret-esque garb.   The aesthetic of Gustave Klimt’s painting of Danae, which Kate Croy will later echo with her own body, and the Greco Roman fantasies of Lawrence Alma-Tadena also figure in the costume story.

These Fortuny dresses are not originals, but copies, made by a husband and wife team in the UK who reinvented Fortuny’s mysterious pleating techniques. They are worn, as appropriate, with printed, or devore velvet wraps.

The Wings of the Dove by Henry James, Penguin Classics edition with an introduction by Millicent Bell, https://www.loa.org/news-and-views/1218-_the-wings-of-the-dove_-classic-henry-james-as-film-noir , http://www.frockflicks.com/wings-dove/